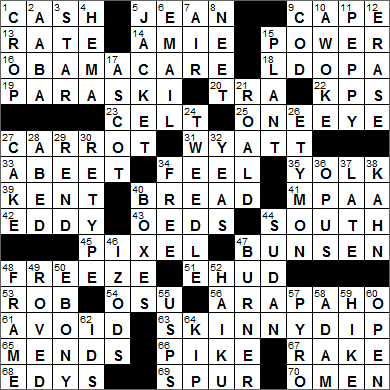 NOTE: I solve the crossword using an online version of the puzzle. As a result, the numbers in my grid today may not match those in the grid published in newspapers.

CROSSWORD SETTER: Joel Fagliano
Across and Down … today’s themed answers each comprise two words, the first written in the across-direction, and the second in the down-direction. And, both words in the answer share their first letters in the grid:

9A. Where the Pilgrims first landed in the New World CAPE
9D. – COD

48A. Alternative to a fade-out in a movie ending FREEZE
48D. – FRAME

Today’s Wiki-est, Amazonian Googlies
Across
9. Where the Pilgrims first landed in the New World CAPE
9. – COD
Cape Cod is indeed named after the fish. It was first called Cape Cod by English navigator Bartholomew Gosnold in 1602 as his men caught so many fish there.

18. Parkinson’s disease drug L-DOPA
The name of the drug L-3,4-DihydrOxyPhenylAlanine can be shortened, thankfully, to L-DOPA. Swedish scientist Arvid Carlsson won a Nobel Prize for showing that L-DOPA could be used to reduce the symptoms of Parkinson’s Syndrome.

19. Engage in an extreme winter sport PARASKI
Paraskiing is skiing across snowy terrain pulled along by a parachute.

22. Mil. mess personnel KPS
KP is a US military slang term, and stands for either “kitchen police” or “kitchen patrol”.

“Mess” first came into English about 1300 and described the list of food needed for a meal, from the Old French word “mes” meaning a portion of food or a course at a meal. This usage in English evolved into “mess” meaning a jumbled mass of anything from the concept of “mixed food”. At the same time, the original usage in the sense of a food for a meal surfaced again in the military in the 1500s when a “mess” was a communal eating place.

23. Sixer rival CELT
The Boston Celtics NBA basketball team were founded just after WWII in 1946. The Celtics won eight league championships in a row from 1958 to 1966. That’s the longest consecutive championship winning streak of any professional sports team in North America.

The Philadelphia 76ers basketball team is one of the oldest franchises in the NBA. The Sixers were formed in 1946 as the Syracuse Nationals. The team moved to Philadelphia in 1963, and the name 76er was chosen in a fan contest, a name that honors the men who fought for the country’s independence in 1776.

25. Feature of Polyphemus from “The Odyssey” ONE EYE
In Greek mythology, Polyphemus was one of the Cyclopes, a one-eyed creature. Polyphemus features in Homer’s “Odyssey”, as he captures Odysseus and twelve of his crew and starts to devour them one-by-one for his meals. Odysseus manages to plunge a wooden stake into Polyphemus’s eye, blinding him. Then he and his remaining crew tie themselves to the underside of sheep, and the blind Polyphemus lets them escape thinking he is allowing just his sheep to pass.

27. Dessert often made with cream cheese frosting CARROT
27. – CAKE
Cooks started using carrots in cakes in medieval times, as carrots contain more sugar than any other vegetable other than sugar beet. Carrot cake really only became widely available in the US in the sixties, which I find surprising given how ubiquitous the confection is today …

31. Comic Cenac formerly of “The Daily Show” WYATT
Wyatt Cenac is a comedian and writer from New York City who was raised in Dallas. Cenac worked for three years as a writer for the TV show “KIng of the Hill” before joining “The Daily Show with Jon Stewart” as writer and correspondent.

39. English county closest to Continental Europe KENT
Kent is a county in the southeast of England. Kent is a little unusual in that it shares a “land” border with France. That border nominally exists halfway through the Channel Tunnel, one end of which comes to surface in the Kent port of Folkestone.

41. Org. with an antipiracy stance MPAA
The Motion Picture Association of America (MPAA) is a trade association that represents all of the big Hollywood studios. It was the MPAA that created the Hays Code that governed moral censorship of films released from 1930 to 1968. The MPAA then introduced the film rating system that is in place to this day.

43. Meaningful sets, for short? OEDS
The “Oxford English Dictionary” (OED) contains over 300,000 “main” entries and 59 million words in total. It is said it would take a single person 120 years to type it out in full. The longest entry for one word in the second edition of the OED is the verb “set”. When the third edition was published in 2007, the longest entry for a single word became the verb “put”. Perhaps not surprisingly, the most-quoted author in the OED is William Shakespeare, with his most quoted work being “Hamlet”. The most-quoted female author is George Eliot (aka Mary Ann Evans).

45. Resolution unit PIXEL
A pixel is a dot, the base element that goes to make up a digital image.

47. Lab item BUNSEN
47. – BURNER
The Bunsen burner is common piece of lab equipment that is used for heating and combustion. The device was invented in 1854 by Robert Bunsen at the University of Heidelberg in Germany.

51. Israel’s Barak EHUD
Ehud Barak served as Prime Minister of Israel from 1999 to 2001. Barak left office after he called a special election for Prime Minister and lost the vote to Ariel Sharon. Barak resigned from the Knesset and took an advisory job with the US company Electronic Data Systems (EDS), and did some security-related work with a private equity company. In 2007, Barak took over leadership of Israel’s Labor Party and is now the country’s Minister of Defense.

54. Seven-time Rose Bowl winner, for short OSU
Ohio State University (OSU) was founded back in 1870 as the Ohio Agricultural and Mechanical College. The athletic teams of OSU are called the Buckeyes, named after the state tree of Ohio. In turn the buckeye tree gets its name from the appearance of its fruit, a dark nut with a light patch thought to resemble a “buck’s eye”.

The oldest of all the bowl games is the Rose Bowl and so has the nickname “The Granddaddy of the Them All”. The first Rose Bowl game was played in 1902.

56. Buffalo hunters, once ARAPAHO
The Arapaho tribe lived on the eastern plains of Colorado and Wyoming. The Arapaho traditionally wintered in small camps in the foothills of the Rockies, and then relocated to plains in the spring where they hunted the buffalo that were gathering to give birth to their young.

There two species of bison left (four species are extinct). We are most familiar with the American bison (commonly called the American buffalo), but there is a also a European bison, sometimes called a “wisent”.

67. Be a fall guy? RAKE
One might rake up leaves in the fall.

68. Ben & Jerry’s alternative EDY’S
Dreyers’ ice cream sells its products under the name Dreyers in the Western United States, and Edy’s in the Eastern states. The company’s founders were William Dryer and Joseph Edy.

69. 2014 N.B.A. champ SPUR
The Spurs are the professional basketball team based in San Antonio, Texas. The team was founded as the Dallas Chaparrals of the American Basketball Association (ABA) in 1967.

7. Canada or Jordan preceder AIR
Air Canada is the largest airline in Canada, and the ninth largest in the world in terms of passengers carried. The airline was founded in 1936 as Trans-Canada Air Lines.

Air Jordan is Nike brand of shoe (and other apparel), endorsed by NBA great Michael Jordan. The silhouette of a basketball player that features on Air Jordans is known as the “jumpman” logo.

8. Bygone brand in the shaving aisle NEET
The hair removal product “Neet” was launched in Canada in 1901, and was also sold as “Immac”. Today it is sold under the name “Veet”.

17. Quaint wear ASCOT
An Ascot tie is that horrible-looking (I think!) wide tie that narrows at the neck, which these days is only really worn at weddings. The tie takes its name from the Royal Ascot horse race at which punters still turn up in formal wear at Ascot Racecourse in England.

21. First name in children’s literature ROALD
Roald Dahl’s name is Norwegian. Dahl’s parents were from Norway although Dahl himself was Welsh. Dahl became one of the most successful authors of the twentieth century. A couple of his most famous titles are “James and the Giant Peach” and “Charlie and the Chocolate Factory”.

24. Sing like a bird TWEEDLE
“To tweedle” is to coax, allure. Originally “to tweedle” meant “to sing, whistle”, so today the term can often mean “to coax with music”.

26. Word origin ETYMON
The “etymon” is the word from which another word is derived. For example, the etymon of “Ireland” is “Eriu”, the old Celtic name for the island of Ireland.

32. Half of a vote YEAS
The other half of the vote would be the “nays”.

38. Architect Louis KAHN
Louis Kahn was a celebrated architect based in Philadelphia. Among his list of works is the Yale University Art Gallery and the First Unitarian Church in Rochester, New York.

46. Some preppy shirts IZODS
Jack Izod was a tailor of some repute over in England, producing shirts for King George V as well as other members of the Royal Family. As Izod was about to retire, he was approached for the use of his name by an American clothing manufacturer based in New York. The brand Izod of London was introduced to America in 1938.

52. “An old silent pond / A frog jumps into the pond / Splash! Silence again,” e.g. HAIKU
A haiku is a very elegant form of Japanese verse. When writing a haiku in English we tend to impose the rule that the verse must contain 17 syllables. This restriction comes from the rule in Japanese that the verse must contain 17 sound units called “moras”, but moras and syllables aren’t the same thing. What the difference is though, is not so clear to me. Here’s an example of a Haiku:

55. Offerer of package deals, in brief USPS
The US Postal Service (USPS) is a remarkable agency in many ways. For starters, the government’s right and responsibility to establish the Post Office is specifically called out in Article One of the US constitution. Also, the first postmaster general was none other than Benjamin Franklin. And the USPS operates over 200,000 vehicles, which is the largest vehicle fleet in the world.

62. T.S.A. requirements IDS
The Transportation Security Administration (TSA) was created in 2001, soon after the 9/11 attacks.