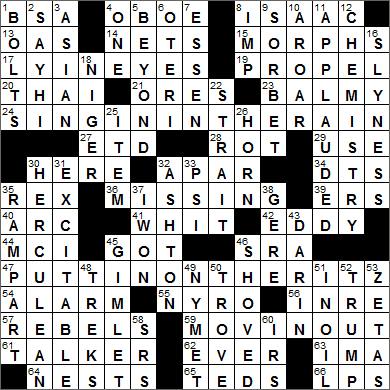 CROSSWORD SETTER: Robyn Weintraub
THEME: Missin’ G … each of today’s themed answers is a song title that is missin’ a letter G at the end of one word:

Today’s Wiki-est, Amazonian Googlies
Across
1. Org. with merit badges BSA
As every little boy (of my era) knows, the Scouting movement was founded by Lord Baden Powell, in 1907. The Boy Scouts of America (BSA) soon followed, in 1910.

4. Cousin of a clarinet OBOE
The oboe is perhaps my favorite of the reed instruments. The name “oboe” comes from the French “hautbois” which means “high wood”. When you hear an orchestra tuning before a performance you’ll note (pun intended!) that the oboe starts off the process by playing an “A”. The rest of the musicians in turn tune to that oboe’s “A”.

8. Sir ___ Newton ISAAC
Sir Isaac Newton was one of the most influential people in history, the man who laid the groundwork for all of classical mechanics. The story about an apple falling on his head, inspiring him to formulate his theories about gravity, well that’s not quite true. Newton often told the story about observing an apple falling in his mother’s garden and how this made him acutely aware of the Earth’s gravitational pull. However, he made no mention of the apple hitting him on the head.

13. Western Hemisphere treaty grp. OAS
The Organization of American States (OAS) has its headquarters in Washington, D.C. All the independent states in the Americas are members of the group except Honduras, which had its membership suspended after the country’s 2009 coup.

17. 1975 Eagles hit about a woman having an affair LYIN’ EYES
The Eagles song “Lyin’ Eyes” was recorded in 1975. Written by band members Don Henley and Glenn Frey, the lyrics were inspired by a meeting between a man and a woman the composers witnessed in Dan Tana’s Bar & Restaurant in Los Angeles. Henley and Frey imagined a scenario of secret love, and “Lyin’ Eyes” was born.

20. Bangkok native THAI
Bangkok is the capital city of Thailand. The exact etymology of the name “Bangkok” seems unclear, although “bang” is a Thai word meaning “a village situated on a stream”.

24. Title hit of a 1952 Gene Kelly musical SINGIN’ IN THE RAIN
The actor and dancer Gene Kelly was from Pittsburgh. Kelly’s best-known performances were in the films “An American in Paris” (1951) and “Singin’ in the Rain” (1952). “Singin’ in the Rain” was co-directed by Kelly and the great Stanley Donen. A few years later, in 1960, Kelly married Jeanne Coyne, Donen’s ex-wife.

27. When an airplane is due to take off, for short ETD
Estimated time of departure (ETD)

34. Drunk’s condition, for short DTS
The episodes of delirium that can accompany withdrawal from alcohol are called Delirium Tremens (the DTs). The literal translation of this Latin phrase is “trembling madness”.

35. Tyrannosaurus ___ REX
The Tyrannosaurus rex (usually written T. rex) was a spectacular looking dinosaur. “Tyrannosaurus” comes from the Greek words “tyrannos” (tyrant) and “sauros” (lizard), and the “rex” is of course Latin for “king”. They were big boys, measuring 42 feet long and 13 feet tall at the hips, and weighing 7.5 tons.

41. Tiniest amount WHIT
Both “whit” and “fig” are used to describe a trivial amount, a mere trifle.

44. Old AT&T rival MCI
MCI was a giant telecom company that suffered a similar fate to Enron, and around about the same time. MCI’s stock price fell in 2000 and in maneuvers designed to protect the price, the company committed illegal acts. The larger-than-life CEO back then, Bernie Ebbers, is now serving a 25-year sentence in Louisiana.

In Spanish, a family (una familia) might live in the house (la casa).

47. 1930 Harry Richman hit whose title describes ostentatious living PUTTIN’ ON THE RITZ
“Puttin’ on the Ritz” is a song written by Irving Berlin in 1929, for the musical film of the same name. Back in the twenties, the expression “puttin’ on the Ritz” was used to mean “dressing very fashionably”, well enough for a visit to the Ritz Hotel …

Harry Richman was an all-round entertainer who learned his trade on the vaudeville circuit. Richman wasn’t considered a great actor, but he did get to sing the Irving Berlin song “Puttin’ on the Ritz” in the 1930 movie of the same name. That recording was a big hit for Richman in that same year. Of the stage, he was an aviator of some repute and was the co-pilot on the first round-trip transatlantic crossing in 1936.

55. Singer/songwriter Laura NYRO
Laura Nyro was a singer-songwriter from the Bronx, New York. Nyro had success with her own recordings, but her songs were even more successful when recorded by other big names. Two of Nyro’s compositions were “Eli’s Coming” recorded by Three Dog Night, and “Stoney End” by Barbra Streisand.

59. 1978 Billy Joel hit that gave its name to a 2002 Broadway musical MOVIN’ OUT
If you ever get the chance to see it, I strongly recommend the Twyla Tharp musical “Movin’ Out”, a modern dance work that’s built around the music of Billy Joel. There’s no dialog, and a pretty thin plot, but it’s a wonderful series of fabulously choreographed dances to Joel hits. It’s guaranteed to have you dancing in aisles.

65. “Bill & ___ Excellent Adventure” TED’S
“Bill & Ted’s Excellent Adventure” is a 1989 comedy sci-fi film, starring Alex Winter as Bill and Keanu Reeves as Ted. I don’t usually like “stoner” movies, but I found this one to be quite entertaining. Bill and Ted are two slacker students who travel through time to collect a band of historical figures for a history presentation at school.

Down
4. Start of almost every ZIP code in New York ONE
ZIP codes were introduced in 1963. The acronym ZIP stands for Zone Improvement Plan, a name indicating that mail travels more efficiently when the codes are included in the postal address.

6. Cheri formerly of “S.N.L.” OTERI
Cheri Oteri was the SNL cast member who regularly appeared with Will Farrell in the skit featuring a pair of Spartan cheerleaders.

9. Ice cream alternative SORBET
“Sorbet” can mean different things around the world. Here in the US, sorbet is a non-fat frozen dessert that is made without any dairy content.

18. French-speaking African nation NIGER
Bamako is the capital of the African country of Mali. It is the fastest growing city on the whole continent. Located on the Niger River, the name “Bamako” translates from the local language as “crocodile river”.

26. Part of a rhinoceros HORN
There are five types of rhinoceros that survive today, and the smaller Javan Rhino is the most rare. The rhinoceros is probably the rarest large mammal on the planet, thanks to poaching. Hunters mainly prize the horn of the rhino as it is used in powdered form in traditional Chinese medicine.

30. Almost impossible, as a task HERCULEAN
“The Twelve Labors of Hercules” is actually a Greek myth, although Hercules is the Roman name for the hero that the Greeks called Heracles. The first of these labors was to slay the Nemean Lion, a monster that lived in a cave near Nemea. Hercules had a tough job as the lion’s golden fur was impenetrable to normal weapons. One version of the story is that Hercules killed the lion by shooting an arrow into its mouth. Another version says that Hercules stunned the monster with a club and then strangled him with his bare hands.

32. Kutcher of “Two and a Half Men” ASHTON
Ashton Kutcher played the character Michael Kelso on Fox’s “That ‘70s Show”. Kelso was Kutcher’s breakthrough acting role. Kutcher is now appearing on the sitcom “Two and a Half Men”, having replaced the “disgraced” Charlie Sheen. In 2009, Kutcher became the first user on Twitter to get over 1 million followers. I wasn’t one of them …

“Two and a Half Men” is a TV sitcom that is remarkably successful despite being fraught with controversy. The eighth season had to be suspended when the show’s star Charlie Sheen went into drug rehab and made disparaging comments about the show’s producers. Sheen was fired, and his role was taken over by a new character played by Ashton Kutcher. In 2012, Angus T. Jones who plays young Jake urged fans not to watch the show as it was “filth”. Jones had recently converted to the Seventh-day Adventist Church, and the show’s themes clashed with the church’s standards.

33. Letter before omega PSI
The Greek letter psi is the one that looks a bit like a trident or a pitchfork.

43. Bobby of 1950s-’60s pop DARIN
The singer Bobby Darin had a short but eventful life. Darin started in show business as a songwriter for Connie Francis. He then made it big as a performer with huge hits like “Splish Splash”, “Dream Lover”, “Mack the Knife” and “Beyond the Sea”. He was active politically as a supporter of Robert Kennedy, and was present in the Ambassador Hotel in Los Angeles when Kennedy was assassinated. Soon after, Darin found out that the people he thought were his parents, were in fact his grandparents. The woman he knew as his older sister was in fact his mother. Darin died following a heart operation at only 37 years old.

45. Lime-flavored cocktail GIMLET
A gimlet is a relatively simple cocktail, traditionally made with just gin and lime juice. The trend in more recent times is replace the gin with vodka.

49. Citi Field player, for short NY MET
Citi Field is the relatively new baseball stadium used by the New York Mets, and sits right next door to Shea stadium, where the Mets had played for decades. And the name of course comes from sponsor Citigroup.

53. Some sorority women ZETAS
Zeta is the sixth letter of the Greek alphabet, and is a precursor of our Roman letter Z. The word “zeta” is also the ancestor of the name “zed”, which became “zee”, the pronunciation that we use here in the US.