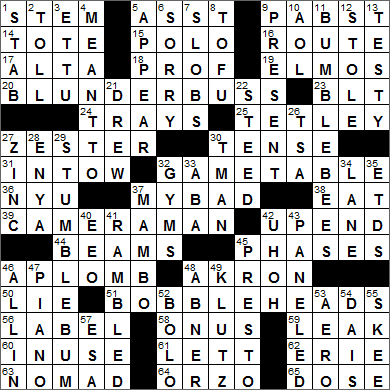 CROSSWORD SETTER: Greg Johnson
THEME: Oops! … today’s themed answers all start with a something that might cause one to say “Oops!”

Today’s Wiki-est, Amazonian Googlies
Across
5. Secy., e.g. : ASST
A secretary (secy.) might be an assistant (asst.)

9. Blue Ribbon brewer : PABST
Pabst Blue Ribbon is the most recognizable brand of beer from the Pabst Brewing Company. There appears to be some dispute over whether or not Pabst beer ever won a “blue ribbon” prize, but the company claims that it did so at the World’s Columbian Exposition in Chicago in 1893. The beer was originally called Pabst Best Select, and then just Pabst Select. With the renaming to Blue Ribbon, the beer was sold with an actual blue ribbon tied around the neck of the bottle until it was dropped in 1916 and incorporated into the label.

15. Sport with mallets : POLO
The sport of polo originated in Iran, possibly before the 5th century BC. Polo was used back them primarily as a training exercise for cavalry units.

19. St. ___ fire : ELMO’S
St. Elmo is the patron saint of sailors. He lends his name to the electrostatic weather phenomenon (often seen at sea) known as St. Elmo’s fire. The “fire” is actually a plasma discharge caused by air ionizing at the end of a pointed object (like the mast of a ship), something often observed during electrical storms.

20. Muzzle-loading firearm : BLUNDERBUSS
A blunderbuss is a muzzle-loading firearm that is an early form of shotgun. The original name for the weapon was the Dutch term “donderbus” meaning thunder pipe”. A handgun version of the weapon was called a “dragon”, and some examples actually had a dragon’s head carved around the muzzle’s head. The fiery muzzle blast was said to imitate the fiery breath of a dragon, hence the name. And, the mounted infantry known as “dragoons” took their name from the “dragon” firearm.

23. Sandwich with toasted bread, for short : BLT
The BLT (bacon, lettuce and tomato) is the second most popular sandwich in the US, after the plain old ham sandwich.

25. Lipton alternative : TETLEY
Tetley was founded by Joseph Tetley in Yorkshire in 1837. Joseph and his brother used to sell salt door-to-door from a pack horse and started to distribute tea the same way. They became so successful selling tea that they relocated to London. Notably, Tetley’s was the first company to introduce tea bags in the UK, back in 1953.

36. Sch. in Lower Manhattan : NYU
The main campus of the private New York University (NYU) is located right in Manhattan, in Washington Square in the heart of Greenwich Village. NYU has over 12,000 resident students, the largest number of residents in a private school in the whole country.

46. Self-confidence : APLOMB
“Aplomb” is such a lovely word, meaning confidence and assurance. It is a French word that literally means “perpendicularity”, or “on the plumb line”. The idea is that someone with aplomb is poised, upright, balanced.

48. All-American Soap Box Derby city : AKRON
For part of the 1800s, the Ohio city of Akron was the fasting growing city in the country, feeding off the industrial boom of that era. The city was founded in 1825 and its location, along the Ohio and Erie canal connecting Lake Erie with the Ohio River, helped to fuel Akron’s growth. Akron sits at the highest point of the canal and the name “Akron” comes from the Greek word meaning “summit”. Indeed, Akron is the county seat of Summit County.

The Soap Box Derby is a soapbox car racing competition. The first All-American race was held in Dayton, Ohio in 1934. The annual race was moved to Akron, Ohio the following year. Soon after, a purpose built track was built called Derby Downs, as part of the Works Progress Administration (WPA) program of the late thirties.

61. Riga resident : LETT
Latvia is one of the former Soviet Socialist Republics. People from Latvia are called Letts.

62. The “E” in HOMES : ERIE
A famous mnemonic for remembering the names of the Great Lakes is HOMES: standing for Huron, Ontario, Michigan, Erie and Superior.

64. Rice-shaped pasta : ORZO
Orzo is pasta that has been formed into granular shapes, much like barley. And indeed, “orzo” is the Italian word for “barley”.

Down
3. “___, Brute?” : ET TU
It was Shakespeare who popularized the words “Et tu, Brute?” (And you, Brutus?), in his play “Julius Caesar”, although the phrase had been around long before he penned his drama. It’s not known what Julius Caesar actually said in real life just before he was assassinated on the steps of the Senate in Rome.

8. Bean curd : TOFU
Tofu is another name for bean curd, and is a Japanese word meaning just that … bean that has “curdled”. Tofu is produced by coagulating soy milk, using either salt or something acidic. Once the protein has coagulated, the curds are pressed into the familiar blocks. Personally I love tofu, but my wife, she absolutely hates it …

11. Big pollinators : BUMBLEBEES
Bumblebees aren’t very aggressive, but they can sting if they deem it necessary. Unlike honey bees, bumblebees survive the stinging action as their stinger has no barb. There are a few misconceptions about bumblebees. One is that a bumblebee should be incapable of flight based on the laws of aerodynamics, but this isn’t true. Another misconception is that the bee’s buzzing sound is caused by the beating of its wings. In fact, the sound comes from the vibration of its flight muscles. The bee can decouple those muscle from its wings, and so can make a buzzing sound without the wings moving at all.

22. Jouster’s mount : STEED
Tilting is the most recognized form of jousting. Jousting can involve the use of a number of different weapons, but when lances are used the competition is called “tilting”. Jousting took place in a roped-off enclosure that was called the lists, or list field. In later medieval times, some castles and palaces had purpose-built “tiltyards” that were used for jousting. London’s famous Horse Guards Parade is the former tiltyard for the Palace of Whitehall that was used in the time of King Henry VIII.

26. Screener’s org. : TSA
The Transportation Security Administration (TSA) was created in 2001, soon after the 9/11 attacks.

27. ___ oxide (beachgoer’s protection) : ZINC
Zinc oxide is a widely-used compound that does occur naturally, but is mainly produced synthetically. Most of the zinc oxide produced is used in the rubber industry as it is needed for the vulcanization of rubber. It is also one of the two main ingredients in calamine lotion, which is an anti-itching agent. Tiny particles of zinc oxide are often added to sunscreen lotion as it absorbs UVA ultraviolet radiation.

28. New Age star from Ireland : ENYA
Enya’s real name is Eithne Patricia Ní Bhraonáin, which can translate from Irish into Enya Brennan. Her Donegal family (in the northwest of Ireland) formed a band called Clannad, which included Enya. In 1980 Enya launched her very successful solo career. She sure does turn up a lot in crosswords!

30. Federal tax enforcer, informally : T-MAN
A T-man is a law-enforcement agent of the US Treasury (the “T” stands for Treasury).

The YMCA is a worldwide movement that has its roots in London, England. There, in 1844, the Young Men’s Christian Association (YMCA) was founded with the intent of promoting Christian principles through the development of “a healthy spirit, mind and body”. The founder, George Williams, saw the need to create YMCA facilities for young men who were flocking to the cities as the Industrial Revolution flourished. He saw that these men were frequenting taverns and brothels, and wanted to offer a more wholesome alternative.

34. Lois at the Daily Planet : LANE
Lois Lane has been the love interest of Superman/Clark Kent since the comic series was first published in 1938. Lois and Clark both work for the big newspaper in the city of Metropolis called “The Daily Planet”. The couple finally got hitched in the comics (and on television’s “Lois and Clark”) in 1996. But never mind all that … one has to wonder how good the crossword is in “The Daily Planet” …

37. Sensual ballroom dance : MAMBO
The form of music and dance known as mambo developed in Cuba. “Mambo” means “conversation with the gods” in Kikongo, a language spoken by slaves taken to Cuba from Central Africa.

40. Fair-hiring inits. : EEO
Equal Employment Opportunity (EEO) is a term that has been around since 1964 when the Equal Employment Commission was set up by the Civil Rights Act.

47. Instrument for Lady Gaga : PIANO
Lady Gaga is the stage name of Stefani Germanotta. Germanotta is a big fan of the band Queen, and she took her stage name from the marvelous Queen song “Radio Ga Ga”.

48. Doubleday of baseball lore : ABNER
Abner Doubleday was a general in the Union Army during the Civil War. Some say that Doubleday fired the first shot in defense of Fort Sumter in the first battle of the war. After the Civil War, while stationed in San Francisco, Doubleday too out a patent for the cable car system that still runs in the city. Claims have been made that Doubleday also invented baseball, with the first game being played in Elihu Phinney’s cow pasture in Cooperstown, New York.

49. One who might cry “Oops!” : KLUTZ
A “klutz” is an awkward individual, and the term comes from Yiddish. The Yiddish word for a clumsy person is “klots”.

52. Shoestring necktie : BOLO
I’ve never worn a bolo tie, and was surprised to discover that it is a relatively recent invention. The first bolo tie was apparently produced in Wickenburg, Arizona in the late 1940s by a silversmith. The bolo takes its name from the boleadora, an Argentine lariat.

54. Locale for a speaker and honorees : DAIS
Ultimately our word “dais”, meaning “raised platform for a speaker”, comes from the Latin “discus” meaning a “disk-shaped object”. I guess that many a dais was disc-shaped …

55. ___-Ball : SKEE
Skee Ball is that arcade game where you roll balls up a ramp trying to “bounce” it into rings for varying numbers of points. The game was first introduced in Philadelphia, in 1909.