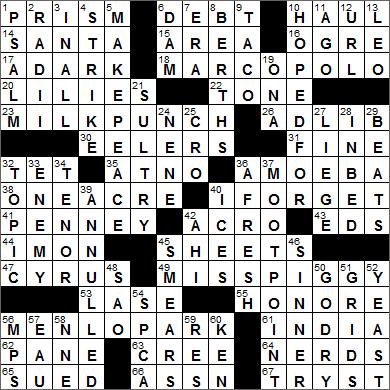 Today’s Wiki-est, Amazonian Googlies
Across
1. Light bender : PRISM
When light passes through a prism, it is split up (“disperses”) into differing wavelengths. It then becomes clear that white light is actually a mixture of different colors, which show up as beautiful spectra.

The poem “A Visit from St. Nicholas” was published anonymously in 1823, and is better known today by its first line “‘Twas the night before Christmas”. Most scholars believe that the poem was written by Clement Clarke Moore, a theologian from New York City. Others say that it was written by Henry Livingston, Jr. a poet from Upstate New York.

17. “It was ___ and stormy night …” : A DARK
Edward Bulwer-Lytton was an English politician and writer. Among his writings, he came up with some phrases that have endured, such as:

18. *Traveler on the Silk Road : MARCO POLO
Marco Polo was a merchant from Venice and a famous traveler throughout Asia. Polo journeyed with his father and uncle on an epic tour of Central Asia and China that lasted 24 years. Marco tends to be the member of the party we remember today though, because it was he who documented their travels in a book called “Il Milione”.

26. Wing it : AD LIB
“Ad libitum” is a Latin phrase meaning “at one’s pleasure”. In common usage the phrase is usually shortened to “ad lib”. On the stage the concept of an “ad lib” is very familiar. For example, an actor may substitute his or her own words for forgotten lines using an ad lib, or a director may instruct an actor to use his or her own words at a particular point in a performance to promote a sense of spontaneity.

30. Anglers after morays : EELERS
Morays are a large group of about 200 species of eels found across the world’s oceans. They are carnivorous and look pretty scary but they’re quite shy when confronted and present no threat to humans. One interesting thing about morays is that they will sometimes work in cooperation with the grouper fish found in reefs, the two helping each other hunt for food.

36. Thing seen on a lab slide : AMOEBA
An ameba (or “amoeba” as we spell it back in Ireland) is a single-celled microorganism. The name comes from the Greek “amoibe”, meaning change. The name is quite apt, as the cell changes shape readily as the ameba moves, eats and reproduces.

47. Billy Ray or Miley : CYRUS
Miley Cyrus became famous playing the Disney Channel character “Hannah Montana”. Miley is of course the daughter of country singer Billy Ray Cyrus. When she was born, Billy Ray and his wife named their daughter “Destiny Hope”, but soon they themselves calling her “Smiley” as she was always smiling as a baby, and this got shortened to Miley over time. Cute …

49. *Lover of Kermit : MISS PIGGY
The Muppet called Miss Piggy has a pretentious air, and so refers to herself as “moi”. In 1998, Miss Piggy even released her own line of perfume called “Moi”.

53. Cut with a ray : LASE
The term “laser” comes from an acronym, “Light Amplification by Stimulated Emission of Radiation” (LASER). It has been pointed out that a more precise name for laser technology is “Light Oscillation by Stimulated Emission of Radiation”, but the resulting acronym isn’t quite so appealing, namely LOSER …

56. *Edison lab site : MENLO PARK
Thomas Alva Edison was nicknamed “The Wizard of Menlo Park” by a newspaper reporter, a name that stuck. He was indeed a wizard, in the sense that he was such a prolific inventor. The Menlo Park part of the moniker recognizes the location of his first research lab, in Menlo Park, New Jersey.

63. Canadian Plains tribe : CREE
The Cree are one of the largest groups of Native Americans on the continent. In the US most of the Cree nation live in Montana on a reservation shared with the Ojibwe people. In Canada most of the Cree live in Manitoba.

66. Part of P.G.A.: Abbr. : ASSN
The Professional Golfers’ Association (PGA) was founded in 1916 and today has its headquarters (unsurprisingly) in Florida, where so many golfers live. Back in 1916, the PGA was based in New York City.

67. Secret rendezvous : TRYST
In its most general sense, a tryst is a meeting at an agreed time and place. More usually we consider a tryst to be a prearranged meeting between lovers. The term comes from the Old French “triste”, a waiting place designated when hunting.

Down
1. Sacred hymn of praise : PSALM
The Greek word “psalmoi” originally meant “songs sung to a harp”, and gave us the word “psalms”.

4. X, in bowling : STRIKE
Bowling has been around for an awfully long time. The oldest known reference to the game is in Egypt, where pins and balls were found in an ancient tomb that is over 5,000 years old. The first form of the game to come to America was nine-pin bowling, which had been very popular in Europe for centuries. In 1841 in Connecticut, nine-pin bowling was banned due to its association with gambling. Supposedly, an additional pin was added to get around the ban, and ten-pin bowling was born.

6. Hoover ___ : DAM
When the magnificent Hoover Dam was completed in 1936 it was the largest hydroelectric plant in the world, as well as being the world’s largest concrete structure. The dam is named after Herbert Hoover for his role in having the dam built when he was Secretary of Commerce, and his later support as US President. When the dam was finally put into service in 1936, the project was two years ahead of schedule. Those were the days …

7. Disco ’70s, e.g. : ERA
Discotheques first appeared during WWII in Occupied France. American-style music (like jazz and jitterbug dances) was banned by the Nazis, so French natives met in underground clubs that they called discotheques where records were often played on just a single turntable. After the war, these clubs came out into the open. One famous Paris discotheque was called “Whiskey a Gogo”. In that Paris disco, non-stop music was played using two turntables next to a dance-floor, and this concept spread around the world.

8. Playoff spots : BERTHS
In the world of sports, a playoff berth is a spot in the playoffs that has been clinched ahead of the season’s conclusion.

9. ___ Bell : TACO
Taco Bell was founded by a former US Marine, 25-year-old Glen Bell. His first restaurant was Bell’s Drive-In, located in Southern California. After opening that first establishment, Bell bought up some more restaurants including four named El Taco. He sold off the El Taco restaurants but used the name in part when he opened his first Taco Bell in 1962. Bell sold then sold franchises, with the 100th Taco Bell opening in 1967. The ex-Marine sold off the whole chain to PepsiCo in 1978, and I am guessing he made a pretty penny.

13. Guitarist Kottke : LEO
Leo Kottke is an acoustic guitarist. He had to move away from his signature, aggressive picking style in the early eighties as the repetitive motions caused severe tendinitis and nerve damage. But, he is still playing …

24. 50th state’s state bird : NENE
The bird called a nene is a native of Hawaii, and is also known as the Hawaiian goose. The name “nene” is imitative of its call. When Captain Cook landed on the islands in 1778, there were 25,000 nene living there. By 1950, the number was reduced by hunting to just 30 birds. Conservation efforts in recent years have been somewhat successful.

25. ___-Magnon : CRO
Remains of early man, dating back to 35,000 years ago, were found in Abri de Cro-Magnon in southwest France, giving the name to those early humans. Cro-Magnon remains are the oldest human relics that have been discovered in Europe.

27. For whom a vassal worked : LIEGE
A liege was a feudal lord, one to whom service or allegiance was owed under feudal law. “Liege” was also the term used for one who owed allegiance or service to a lord. Very confusing …

34. Kind of sax : TENOR
The saxophone was invented by Belgian Adolphe Sax. Sax developed lip cancer at one point in his life, and one has to wonder if his affliction was related to his saxophone playing (I am sure not!). I had the privilege of visiting Sax’s grave in the Cemetery of Montmartre in Paris a few years ago.

48. ___ Paulo : SAO
São Paulo is the largest city in Brazil. São Paulo is also the city with the highest number of helicopters in the world. This is partly driven by the horrendous traffic jams in São Paulo, but also by the wealthy having a very real fear of being kidnapped on the city’s streets.

54. Pet care specialists, for short : SPCA
Unlike in most developed countries, there is no “umbrella” organization in the US with the goal of preventing cruelty to animals. Instead there are independent organizations set up all over the nation using the name SPCA. Having said that, there is an organization called the American Society for the Prevention of Cruelty to Animals (ASPCA) that was originally intended to operate across the country, but really it now focuses its efforts in New York City.

56. AWOL chasers … or a hint to the answers to the six starred clues : MPS
The Military Police (MPs) are concerned with personnel who go AWOL (Absent Without Leave).

60. Kesey or Follett : KEN
Ken Kesey wrote the novel “One Flew Over the Cuckoo’s Nest”. Kesey was one of a group of friends who called themselves the “Merry Pranksters”, a bunch of guys who were associated with the likes of Jack Kerouac, Allen Ginsberg and Timothy Leary, all icons of the Beat Generation.

Ken Follett is a Welsh author specializing in thrillers and historical novels. Among his most famous works are “Capricorn One”, “Eye of the Needle”, “The Man From St. Petersburg” and “On Wings of Eagles”. Quite a few of Follett’s novels have been adapted for the big screen, and you may recognize some movies made from the preceding list of titles.