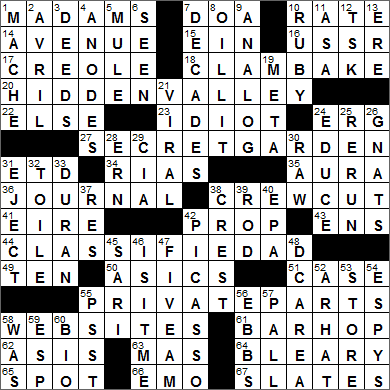 20A. Big name in ranch dressing : HIDDEN VALLEY
27A. Classic of English children’s literature, with “The” : SECRET GARDEN
44A. Small paid item in the back of a newspaper : CLASSIFIED AD

Today’s Wiki-est, Amazonian Googlies
Across
15. “Ich bin ___ Berliner” : EIN
“Ich bin ein Berliner” (I am a Berliner) are famous words of support uttered by President John F. Kennedy in 1963 in a speech in West Berlin. The supposed translation of “Ich bin ein Berliner” as “I am a jelly doughnut” … that’s just an urban legend. Even though a “Berliner” can be the name of a jelly doughnut, President Kennedy’s use of German was perfectly correct.

16. Khrushchev’s land, for short : USSR
Soviet Premier Nikita Khrushchev only ever made two visits to the United States. The second visit was in September 1960 without an invitation, when he appointed himself temporary head of the USSR delegation to the United Nations. The US responded to his unannounced visit by limiting his travel to the island of Manhattan and visits to a Soviet-owned estate on Long Island. During one of the debates at the UN, Khrushchev became outraged at a statement made by the Filipino delegate who called the Soviets two-faced for decrying colonialism while forcibly dominating and occupying Eastern Europe. Khrushchev demanded the right to reply immediately, and when the Filipino delegate refused to yield, the Soviet leader famously took off his shoe and began to pound it on his desk.

20. Big name in ranch dressing : HIDDEN VALLEY
Ranch dressing has been the best selling salad dressing in the country since 1992. The recipe was developed by Steve Henson who introduced it in the fifties to guests on his dude ranch, Hidden Valley Ranch in Northern California. His ranch dressing became so popular that he opened a factory to produce packets of ranch seasoning that could be mixed with mayonnaise and buttermilk. Henson sold the brand for $8 million in 1972.

24. Unit of work, in physics : ERG
An erg is a unit of energy or mechanical work. “Erg” comes from the Greek word “ergon” meaning “work”. A dyne is a unit of force. The name “dyne” comes from the Greek “dynamis” meaning “power, force”. Ergs and dynes are related to each other in that one erg is the amount of energy needed to move a force of one dyne over a distance of one centimeter.

27. Classic of English children’s literature, with “The” : SECRET GARDEN
“The Secret Garden is a children’s novel written by Frances Hodgson Burnett, first published in serial form in 1910, and then as a complete book in 1911. The story is so popular that it has been adapted on more than one occasion, for the stage, big screen, and television and there are also numerous animated productions as well.

31. When a plane is due to take off: Abbr. : ETD
Expected time of departure (ETD)

38. Military hairstyle : CREW CUT
The term “crew cut” probably originated in Yale in the 1890s. The Yale football players were noted for wearing their hair relatively long, as it helped protect their heads inside the flimsy leather football helmets of the day. In contrast, the rowing team wore their hair relatively short, in a style that came to be known as the “crew cut”.

41. The Emerald Isle : EIRE
“Éire”, is the Irish word for “Ireland”. “Erin” is an anglicized version of “Éire” and actually corresponds to “Éirinn”, the dative case of “Éire”.

42. California ballot measure, informally : PROP
A “proposition” is a ballot measure, and an example of direct democracy. Here in the US we live in a representative democracy, so we elect legislators whose job it is to develop and pass laws. In some states, like California, interested parties can put propositions on the ballot that if supported by a majority of voters then become law, effectively bypassing our elected officials.

50. Running shoe brand : ASICS
ASICS is a Japanese company that produces athletic gear, including running shoes. The name comes from the Latin phrase “”anima sana in corpore sano” which translates to “a healthy soul in a healthy body”.

65. “See ___ run” : SPOT
In the “Dick and Jane” series of book for children, Spot was a cat back in the thirties, but then became a dog in later editions.

The “Dick and Jane” beginning reader series of books was originally written by William S. Gray and Zerna Sharp and first published in the 1930s. There are claims of plagiarism from an earlier pair of books published throughout the British Commonwealth that featured the characters Dick and Dora. Indeed, I grew up in the British Isles with “Dick and Dora”, and always assumed that “Dick and Jane” were somehow their American cousins!

67. Schedules : SLATES
To slate is to propose or schedule, a meaning that has existed since the 1880s.

Down
1. Papier-___ : MACHE
Papier-mâché is an artistic medium made from strips of paper, or pulped paper, that is bound with an adhesive. “Papier-mâché” translates from French as mashed or chewed paper.

2. “Sk8er Boi” singer Lavigne : AVRIL
Avril Lavigne is a Canadian musician. Lavigne was the youngest female solo artist to reach number one in the charts in the UK, which she did at 17 years of age in 2002 with her debut album “Let Go”.

4. Battery ends : ANODES
The two terminals of a battery are called the anode and the cathode. Electrons travel from the cathode to the anode creating an electric current in a circuit.

10. Color of Dorothy’s slippers : RUBY
Judy Garland wore ruby slippers in the movie “The Wizard of Oz”. However, in the original novel by L. Frank Baum, Dorothy wore “Silver Shoes”.

19. Prefix with physics : META-
The word “metaphysics” comes from the Greek “meta” (beyond) and “physika” (physical), and is a branch of philosophy that investigates reality beyond the principles of science. Not something I would understand …

21. Like the “Gangnam Style” video : VIRAL
PSY is the stage name of South Korean rapper Park Jae-sang. PSY became an international star when his 2102 music video “Gangnam Style” went viral on YouTube. That video had over 1 billion views on YouTube in about six months, making it the most viewed YouTube video clip of all time. I am not one of the one million …

25. Many a showing on TV Land : RERUN
TV Land is a cable television channel that debuted in 1996. “TV Land” is a name that was used by Nick at Nite in the eighties, and is a term originally coined by “The Rocky and Bullwinkle Show”.

26. Flying pests : GNATS
Gnats are attracted to the smell of rotting food, and to vinegar. Simple homemade traps that use vinegar are often constructed to attract and kill gnats.

29. Spy org. : CIA
The Central Intelligence Agency (CIA) is the successor to the Office of Strategic Services (OSS) formed during WWII. The CIA was chartered by the National Security Act of 1947.

30. Like most sushi : RAW
Sushi is a Japanese dish that has as its primary ingredient cooked, vinegared rice. The rice is usually topped with something, most often fish, and can be served in seaweed rolls. If you want raw fish by itself, then you have to order “sashimi”.

32. Decorative cotton fabric : TOILE
Toile fabric can be used as upholstery, or as a wallpaper, or even us a fabric for clothing.

33. When doubled, “Hungry Like the Wolf” band : DURAN
Duran Duran is a New Wave band from Birmingham in England. Duran Duran’s success was partially driven by some well-received MTV music videos in the 1980s. The band also worked hard on their image and paid a lot of money for very fashionable clothes in which they performed. As a result, one of Duran Duran’s nicknames is “the prettiest boys in rock”.

37. ___ ipsa loquitur : RES
“Res” is the Latin for “thing”. “Res” is used in a lot of phrases in the law, including “res ipsa loquitur”. The literal translation of “res ipsa loquitur” is “the thing speaks for itself”. It refers to situations when there is an injury, and the nature of the injury is such that one can assume that negligence had to have taken place.

40. Org. tasked with enforcing the Clean Air Act : EPA
The Environmental Protection Agency (EPA) was set up during the Nixon administration and began operation at the end of 1970.

42. Painter with a Blue Period : PICASSO
Picasso’s Blue Period refers to his works completed between 1901 and 1904. All his paintings in the era were basically monochromatic, using different shades of blue. HIs best-known work from the period is “The Old Guitarist”, which you can see at the Art Institute of Chicago.

45. Delhi dress : SARI
The item of clothing called a “sari” (also “saree”) is a strip of cloth, as one might imagine, unusual perhaps in that is unstitched along the whole of its length. The strip of cloth can range from four to nine meters long (that’s a lot of material!). The sari is usually wrapped around the waist, then draped over the shoulder leaving the midriff bare. I must say, it can be a beautiful item of clothing.

48. Bethesda, Md., is in it : DC AREA
The community of Bethesda in Maryland lies just northwest of Washington, D.C. The original settlement in the area was called “Darcy’s Store”. a reference to the original store that drew settlers to the location along the toll road between Georgetown and Rockville. The community’s name was changed to Bethesda in 1871 by a local postmaster, after a Presbyterian church called the Bethesda Meeting House. Bethesda is home to the National Institutes of Health (NIH) and to the National Naval Medical Center. During WWII, Bethesda also hosted the Norwegian Royal Family while their country was occupied by German forces.

52. Enlightened Buddhist : ARHAT
“Arhat” is a Sanskrit word, the exact translation of which is somewhat disputed, with the various Buddhist traditions assuming different meanings. Translations vary from “worthy one” to “vanquisher of enemies”.

53. Boutique : STORE
“Boutique” is the French word for a small shop.

54. Annual awards for athletes : ESPYS
The ESPY Awards are a creation of the ESPN sports television network. One difference with similarly named awards in the entertainment industry is that ESPY winners are chosen solely based on viewer votes.

57. Funeral drape : PALL
A pall is a cloth used to cover a casket at a funeral. Pallbearers actually carry the coffin, covered by the pall. The phrase “casting a pall over”, meaning to create a dark mood, is metaphorical use of the pall over the casket.