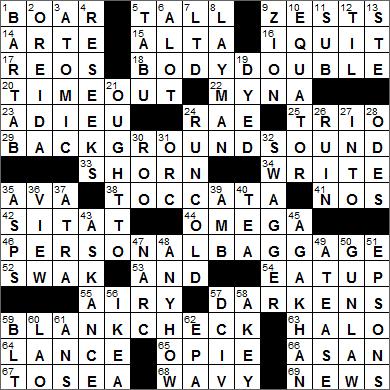 CROSSWORD SETTER: Howard Barkin
THEME: Blank Check … each of today’s themed answers is in two parts, and each part is often seen preceding the word CHECK:

59A. Complete freedom … and a hint to each half of the answer to each starred clue : BLANK CHECK

Today’s Wiki-est, Amazonian Googlies
Across
1. Truffle-seeking beast : BOAR
Truffles are rooted out by pigs, or specially trained dogs. The reason why pigs, especially sows, are so attracted to truffles is that there is a chemical compound found within the truffle that is very similar to androstenol, a sex pheromone found in the saliva of boars.

14. Works of Goya, e.g. : ARTE
Francisco Goya was a Spanish painter, often called the last of the Old Masters and the first of the moderns. Two of Goya’s most famous works are “The Nude Maja” and “The Clothed Maja”.

17. Speed Wagons of old autodom : REOS
The REO Speed Wagon (note the space between “speed” and “wagon”) is the vehicle. REO Speedwagon (no space) is the American rock band.

22. Talkative bird : MYNA
Some species of myna (also “mynah”) bird are known for their ability to imitate sounds.

25. ZZ Top, for one : TRIO
In the blues rock band ZZ Top, the hairy guitar players are Billy F. Gibbons and Dusty Hill. The relatively clean-shaven drummer is … wait for it … Frank Beard …

35. Palindromic girl’s name : AVA
The three most famous palindromes in English have to be:

38. Bach work : TOCCATA
A toccata is a virtuoso piece of music, usually written for a keyboard or plucked string instrument, one that has fast-moving passages that emphasize the dexterity of the performer’s fingers. It is a piece of music with an “improvisatory feel”, a piece that seems very spontaneous in form. The name “toccata” comes from the Italian word “toccare” meaning “to touch”.

44. End of a Greek series : OMEGA
Omega is the last letter of the Greek alphabet and is the one that looks like a horseshoe. The word “omega” literally means “great O” (O-mega). Compare this with the Greek letter Omicron meaning “little O” (O-micron).

55. Like a soufflé’s texture : AIRY
A soufflé is a French dish, usually served as a dessert. The verb “souffler” means “to blow, blow up”.

63. Sign of virtue : HALO
The Greek word “halos” is the name given to the ring of light around the sun or moon, which gives us our word “halo”.

64. Tilter’s weapon : LANCE
Tilting is the most recognized form of jousting. Jousting can involve the use of a number of different weapons, but when lances are used the competition is called “tilting”. Jousting took place in a roped-off enclosure that was called the lists, or list field. In later medieval times, some castles and palaces had purpose-built “tiltyards” that were used for jousting. Do you remember where the Beach Volleyball events were held in the 2012 London Olympics. Well that was Horse Guards Parade, the former tiltyard for the Palace of Whitehall that was used in the time of King Henry VIII.

65. Anthony’s longtime partner on satellite radio : OPIE
“The Opie & Anthony Show” is a talk show broadcast on XM and Sirius satellite radio. Hosts of the show are Opie Hughes and Anthony Cumia. I’ve turned into a bit of grouch in my old age, and I must admit that I find broadcasts like “The Opie & Anthony Show” very puerile and offensive. Past features in the show include “Whip ‘em Out Wednesdays”, “Voyeur Bus” and “T&A with O&A”. You get the idea …

Down
1. Tippler’s account : BAR TAB
When we “run a tab” at a bar say, we are “running a tabulation”, a listing of what we owe. Such a use of “tab” is American slang that originated in the 1880s.

2. Tater Tots maker : ORE-IDA
Ore-Ida frozen foods are all made with potatoes. The company is located in Oregon, just across the border from Idaho. “Ore-Ida” is a melding of the two state names.

Ore-Ida founders came up with the idea for Tater Tots when they were deciding what to do with residual cuts of potato. They chopped up the leftovers, added flour and seasoning, and extruded the mix through a large hole making a sausage that they cut into small cylinders. We eat 70 million pounds of this extruded potato every year!

3. Superprecise, as some clocks : ATOMIC
An atomic clock is the most accurate way of keeping track of time that is known. Most clocks work using some sort of an oscillation that takes place at a regular interval, like a pendulum. In the case of an atomic clock, the oscillation that is measured is between the nucleus of an atom and its surrounding electrons.

5. Fragrance name that’s forbidden-sounding : TABU
Tabu is a whole line of cosmetics and perfumes produced by the House of Dana. The company’s brand names were purchased by a Florida company called Dana Classic Fragrances in 1999.

6. Jillions : A LOT
Jillion is just a large, non-specific amount, and a word that has been used since before WWII (which surprised me!).

7. Old Ford model : LTD
There has been a lot of speculation about what the acronym LTD stands for in the car model known as “Ford LTD”. Many say it stands for Luxury Trim Decor, and others that it is an abbreviation for “limited”. Although the car was produced in Australia with the acronym meaning Lincoln Type Design, it seems LTD was originally chosen as just three meaningless letters that sound well together.

9. Promised Land, to Rastafarians : ZION
I must admit that I don’t really understand Rastafarianism. I do know that a Rasta, like Bob Marley, is a follower of the movement. Some say it is a religion, some not. It does involve the worship of Emperor Haile Selassie I of Ethiopia. In the Rastafari movement, the term “Zion” is used to represent a place of unity, peace and freedom. The term “Babylon” represents an oppressive place of evil.

30. Pal of Pooh : ROO
Like most of the characters in A. A. Milne’s “Winnie the Pooh”, Roo was inspired by on a stuffed toy belonging to Milne’s son, Christopher Robin.

31. Humanoid monster of myth : ORC
Orcs are mythical humanoid creatures that appear in the writings of J. R. R. Tolkien. Since Tolkien’s use of orcs, they have also been featured in other fantasy fiction and in fantasy games.

35. Nile reptiles : ASPS
The asp is a venomous snake found in the Nile region of Africa. It is so venomous that the asp was used in ancient Egypt and Greece as a means of execution. Cleopatra observed such executions noting that the venom brought on sleepiness without any painful spasms. When the great queen opted to commit suicide, the asp was therefore her chosen method.

37. First razor with a pivoting head : ATRA
Fortunately for crossword setters, the Atra razor was introduced by Gillette in 1977. The Atra was sold as the Contour in some markets and its derivative products are still around today. I just learned that the Atra was the first razor to feature a pivoting head, definitely a selling point, I’d say …

45. Shiite leader who claims direct descent from Muhammad : AGA KHAN
Aga Khan is a hereditary title of the Imam of a large sect within the Shi’a Muslim faith. The current Aga Khan is Shah Karim al-Hussayni, who has held the position since 1957.

47. Buster? : NARC
“Narc” is a slang term for a law enforcement officer who tracks down criminals associated with illegal drugs.

50. The Brady Bill is one : GUN LAW
The Brady Handgun Violence Prevention Act (usually referred to as “the Brady Bill”) was enacted in 1993 and signed into law by President Bill Clinton. The law instituted federal background checks for anyone wishing to purchase a firearm. The legislation is named for Jm Brady, Ronald Reagan’s press secretary who was paralysed for life when John Hinckley, Jr. attempted to assassinate the president.

51. Popular printers : EPSONS
Seiko Epson is a Japanese company, one of the largest manufacturers of printers in the world. The company has its roots in the watch business, roots that go back to 1942. Seiko was chosen as the official timekeeper for the 1964 Summer Olympics in Tokyo and was asked to supply a timer that produced a printed record. This request brought Seiko into the business of printer production. The company developed the world’s first mini-printer for the 1964 Games and called it EP-101 (EP standing for Electronic Printer). In 1975 Seiko introduced the next generation of EP printers which was called EPSON, from “SON of EP”. Cute, huh?

56. Certain superstore : IKEA
The furniture chain IKEA was founded by Ingvar Kamprad in 1943, when he was just 17-years-old. IKEA is an acronym that stands for Ingvar Kamprad Elmtaryd Agunnaryd (don’t forget now!). Elmtaryd was the name of the farm where Ingvar Kamprad grew up, and Agunnaryd is his home parish in Sweden.

59. Crunchy sandwich : BLT
The BLT (bacon, lettuce and tomato) is the second most popular sandwich in the US, after the plain old ham sandwich.

60. Mekong Valley native : LAO
The official name for the country of Laos is the Lao People’s Democratic Republic. In the Lao language, the country’s name is “Meuang Lao”. The French ruled Laos as part of French Indochina, having united three separate Lao kingdoms. As there was a plural of “Lao” entities united into one, the French added the “S” and so today we tend to use “Laos” instead of “Lao”.

The Mekong is the twelfth longest river in the world, at over 2,700 miles in length. It rises in the Tibetan Plateau and empties into the South China Sea at the famed Mekong delta system in Vietnam.