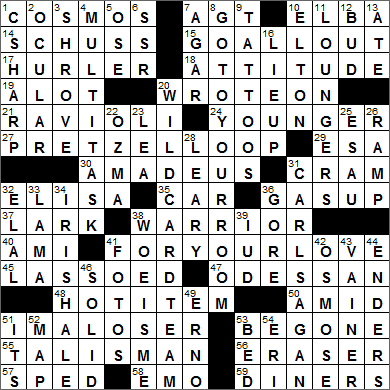 Today’s Wiki-est, Amazonian Googlies
Across
1. It has many giants and dwarfs : COSMOS
The cosmos is the universe, regarded as a harmonious and orderly entity. The term comes from the Greek “kosmos” meaning “good order, orderly arrangement”.

10. Part of the former Republic of Pisa : ELBA
I had a lovely two-week vacation in Tuscany once, including what was supposed to be a two-night stay on the island of Elba. I had envisioned Elba as a place full of history, and maybe it is, but it is also overrun with tourists who use it as a beach getaway. We left after one day and we won’t be going back again …

14. Run down a mountainside : SCHUSS
A schuss is a very fast run downhill in skiing, not taking any turns to slow the pace of the descent. “Schuss” is a German word for “shot”.

24. Like Princess Leia vis-à-vis Luke Skywalker : YOUNGER
Princess Leia is Luke Skywalker’s younger sister in the original “Star Wars” trilogy and was played by Carrie Fisher. Carrie Fisher has stated that she hated the famous “cinnamon bun hairstyle” that she had to wear in the films, as she felt it made her face look too round. She also had to to sit for two hours every day just to get her hair styled. Two hours to get your hair done? It takes me just two seconds …

29. Celle-là, across the Pyrenees : ESA
The word “that” can translate as “celle-là” in French, and as “esa” in Spain.

30. Movie with the line “I’m a vulgar man. But I assure you, my music is not” : AMADEUS
The composer Mozart’s full name was Wolfgang Amadeus Mozart. The name “Wolfgang” translates literally as “wolf journey”. Amadeus translates as “love god”!

41. 1965 Yardbirds hit : FOR YOUR LOVE
The Yardbirds is a rock band that was very big in the sixties. It disbanded in 1968, but reformed in 1992 and is still going strong today. One of the groups most famous hits was “For Your Love”, and playing on the original recording of that song was band member Eric Clapton. Clapton left the Yardbirds soon afterwards, having gained his initial foothold in the world of rock music.

45. Like many rodeo animals : LASSOED
“Rodeo” is a Spanish word, which is usually translated as “round up”.

47. Dweller near the Potemkin Stairs : ODESSAN
The Potemkin Stairs is a symbol of Odessa, Ukraine, and is a staircase with 192 steps in total. Prior names for the structure were Boulevard Steps, the Giant Staircase, the Richelieu Steps and the Primorsky Stairs. The “Potemkin” name was applied in 1955 in honor of the 30th anniversary of the Battleship Potemkin.

The Russian battleship Potemkin is perhaps more famous for an on-board rebellion than for any naval action. In 1905, the Potemkin was on firing exercises when the crew refused to eat meat that contained maggots. The second-in-command gathered the crew on the quarterdeck, and lined them up in front of armed marines. Fearing a mass execution, the crew rushed the marines and began the famous mutiny. The event was reconstructed in an equally famous film by Sergei Eisenstein called “The Battleship Potemkin”, a silent film released in 1925 that is considered by many to be greatest film of all time.

55. Scarab, e.g. : TALISMAN
Scarabs were amulets in ancient Egypt. Scarabs were modelled on the dung beetle, as it was viewed as a symbol of the cycle of life.

58. Like some broody teens : EMO
The musical genre of “emo” originated in Washington D.C. in the 80s, and takes its name from “emotional hardcore”. “Emo” is also the name given to the associated subculture. Not my cup of tea …

Down
2. Telescope part : OCULAR
The ocular lens is the eyepiece of many optical devices, such as telescopes and microscopes.

3. Tuesday preceder : SHROVE
“To shrive” is to obtain absolution by confessing and doing penance. The past tense of “shrive” is “shrove”. The verb gives its name to Shrove Tuesday, the day before the season of fasting known as Lent. Shrove Tuesday is named in recognition of the early Christian tradition of confessing the week before Lent.

5. Ending of saccharides : -OSE
“Saccharide” is an alternative name for “carbohydrates”. Monosaccharides and disaccharides are mainly sugars, and the term “saccharide” comes from the Greek “sákkharon” meaning “sugar”.

6. Letters in old atlases : SSR
The former Soviet Union (USSR) was created in 1922, not long after the Russian Revolution of 1917 that overthrew the Tsar. Geographically, the new Soviet Union was roughly equivalent to the old Russian Empire, and was comprised of fifteen Soviet Socialist Republics (SSRs).

7. Seaweed derivative : AGAR
Agar (also “agar-agar”) is a jelly extracted from seaweed that has many uses. Agar is found in Japanese desserts, and can also be used as a food thickener or even as a laxative. In the world of science it is the most common medium used for growing bacteria in Petri dishes.

9. Some body work : TATTOOS
The word “tattoo” (often shortened to “tat”, or informally as “ink”) was first used in English in the writings of the famous English explorer Captain Cook. In his descriptions of the indelible marks adorning the skin of Polynesian natives, Cook anglicized the Tahitian word “tatau” into our “tattoo”.

10. John in an arena : ELTON
Elton John’s real name is Reginald Dwight. Sir Elton was knighted in 1998, not for his music but for his charitable work. He founded his own Elton John AIDS Foundation back in 1992.

11. Chaises, in Cheshire : LOUNGERS
Cheshire is an “unofficial” county in the northwest of England, unofficial in that it was abolished as an administrative area in 2009. One of Cheshire’s claims to fame is the production of Cheshire cheese.

22. Character in many Baum works : OZMA
L. Frank Baum wrote a whole series of books about the Land of Oz, and Princess Ozma appears in all of them except the one that’s most famous, “The Wonderful Wizard of Oz”.

L. Frank Baum (the “L” is for Lyman) was of course famous for writing “The Wonderful Wizard of Oz”. Writing early in the 20th century, Baum actually described in his books things that had yet to be invented, like television, laptop computers and wireless telephones.

Perhaps the most famous elegy in the English language is that written by Thomas Gray, completed in 1750. His “Elegy Written in a Country Churchyard” is the source of many oft-quoted phrases, including:

28. Noted acid studier : LEARY
Leary was a psychologist and writer, an icon of the sixties counterculture and a promoter of the use of LSD. Leary popularized the phrase “Turn On, Tune In, Drop Out” in the sixties. After he died, some of Leary’s ashes were “buried” in space, launched aboard a rocket that contained the ashes of 24 other people including “Star Trek” creator Gene Roddenberry.

31. Noted 1-Across studier : CARL SAGAN
Carl Sagan was a brilliant astrophysicist and a great communicator. Sagan was famous for presenting obscure concepts about the cosmos in such a way that we mere mortals could appreciate. He also wrote the novel “Contact” which was adapted into a fascinating 1997 film of the same name starring Jodie Foster.

El Al Israel Airlines is the flag carrier of Israel. The term “el al” translates from Hebrew as “to the skies”.

“Lost Horizon” is a James Hilton novel that was first published in 1933. Famously, the book was adapted for the big screen in a movie of the same name in 1937. The fabulous film was directed by Frank Capra and starred Ronald Colman and Jane Wyatt.

34. St. Patrick’s Day order : IRISH ALE
There is a fair amount known about St. Patrick, some of which comes from two letters written in his own hand. St. Patrick lived in the fifth century, but was not born in Ireland. He was first brought to Ireland at about 16 years of age from his native Britain, by Irish raiders who made him a slave for six years. Patrick managed to escape and returned to his homeland where he studied and entered the Church. He went back to Ireland as a bishop and a missionary and there lived out the rest of his life. There seems to be good evidence that he died on March 17th (now celebrated annually as St. Patrick’s Day), although the year is less clear. The stories about shamrock and snakes, I am afraid they are the stuff of legend.

36. “Saw” sights : GORE
I know just enough about the “Saw” series of films that I won’t be watching them. They fall into the horror genre, and there is a lot of blood, gore and cruelty.

39. Alternative to the pill, briefly : IUD
It seems that it isn’t fully understood how intrauterine devices (IUDs) work. The design that was most popular for decades was a T-shaped plastic frame on which was wound copper wire. It’s thought that the device is an irritant in the uterus causing the body to release chemicals that are hostile to sperm and eggs. This effect is enhanced by the presence of the copper.

42. Slip through, say : OSMOSE
Osmosis is the movement of a solvent (often just water) across a semipermeable membrane. In the process of osmosis, the solvent tends to flow from an area of less concentration to an area of higher concentration. This sense of “absorbing” water effortlessly gives rise to the expression “learning by osmosis”.

43. Like Cinderella’s stepsisters vis-à-vis Cinderella : VAINER
The folk tale about “Cinderella” was first published by French author Charles Perrault in 1697. The storyline of the tale may date back as far as the days of Ancient Greece. A common alternative title to the story is “The Little Glass Slipper”.

44. “___ Game” : ENDER’S
Orson Scott Card is a science fiction author (mainly). Card’s most famous work is his novel “Ender’s Game” first published in 1985. “Ender’s Game” was adapted into a movie and released in 2013, with a cast that includes Harrison Ford.