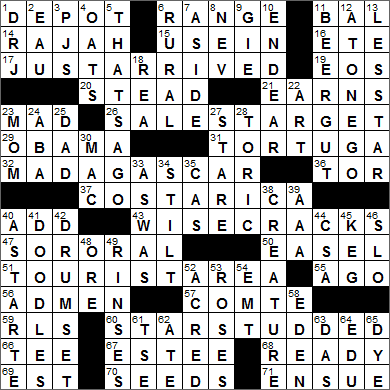 CROSSWORD SETTER: Bruce Haight
THEME: Star-Studded … each of today’s themed answers has the word STAR hidden inside, each is STAR-STUDDED:

60A. Like the Oscars … or the answers to this puzzle’s seven asterisked clues? : STAR-STUDDED

Today’s Wiki-est, Amazonian Googlies
Across
11. ___ Harbour, Fla. : BAL
Bal Harbour is a village in Florida that is located on the northern tip of the barrier island usually known as Miami Beach.

14. Big Indian : RAJAH
“Raja” (also “rajah”) is word derived from Sanskrit that is used particularly in India for a monarch or princely ruler. The female form is “rani” (also “ranee”) and is used for a raja’s wife.

19. Aurora’s Greek counterpart : EOS
In Greek mythology, Eos is the goddess of the dawn who lived at the edge of the ocean. Eos would wake each morning to welcome her brother Helios the sun. The Roman equivalent of Eos is Aurora.

23. Magazine with a back-cover fold-in : MAD
“Mad” magazine has been around since 1952, although back them it was more of a comic book than a magazine. The original founder and editor was Harvey Kurtzman, and in order to convince him to stay, the publisher changed the format to a magazine in 1955, when the publication really took off in terms of popularity.

29. 2009 Peace Nobelist : OBAMA
President Barack Obama won the 2009 Nobel Peace Prize, the fourth US president to be so honored. He is the only one of the four to have been awarded the prize during his first year of office. The Nobel committee gave the award citing President Obama’s work towards a new climate in international relations, particularly in reaching out to the Muslim world.

31. Island setting for “Pirates of the Caribbean” : TORTUGA
“Tortuga” is Spanish for “turtle”.

The “Pirates of the Caribbean” series of films is of course based on the wonderful ride at the Disney theme parks. The first title in the series is “The Curse of the Black Pearl”, released in 2003. The film is remarkable in many ways, including the fact that it was the first Disney movie to be given a PG-13 rating.

32. Title island of a 2005 DreamWorks animated film : MADAGASCAR
“Madagascar” is an animated film released in 2005. It’s a story about zoo animals who are used to “the easy life” in captivity, getting shipwrecked on the island of Madagascar off the African coast.

37. *Oldest continuous democracy in Central America : COSTA RICA
Costa Rica is in Central America, bordered by Nicaragua in the north, and Panama to the South. Costa Rica is remarkable in my opinion, a leader on the world stage in many areas. It has been referred to as the “greenest” country in the world, the “happiest” country in the world, and has a highly educated populace. In 1949, the country unilaterally abolished its own army, permanently …

50. Landscapist’s prop : EASEL
The word “easel” comes from an old Dutch word meaning “donkey” would you believe? The idea is that an easel carries its load (an oil painting, say) just as a donkey would carry its load.

57. Title for a French nobleman : COMTE
“Comte” is the French word for “count”, as in “The Count of Monte-Cristo”, the novel by Alexandre Dumas.

60. Like the Oscars … or the answers to this puzzle’s seven asterisked clues? : STAR-STUDDED
The Academy of Motion Picture Arts and Sciences (AMPAS) is the organization that gives the annual Academy Awards also known as the “Oscars”. The root of the name “Oscar” is hotly debated, but what is agreed is that the award was officially named “Oscar” in 1939. The first Academy Awards were presented at a brunch in 1929 with an audience of just 29 people. The Awards ceremony is a slightly bigger event these days …

67. First name in cosmetics : ESTEE
Estée Lauder was quite the successful businesswoman, with a reputation as a great salesperson. Lauder introduced her own line of fragrances in 1953, a bath oil called “Youth Dew”. “Youth Dew” was marketed as a perfume, but it was added to bathwater. All of a sudden women were pouring whole bottles of Ms. Lauder’s “perfume” into their baths while using only a drop or two of French perfumes behind their ears. That’s quite a difference in sales volume …

Down
1. N.B.A.’s Erving, to fans : DR J
Julius Erving is a retired professional basketball player who was known as “Dr. J”, a nickname he picked up in high school. Dr. J was a trailblazer in many ways, being the first player associated with slam dunking and other moves above the rim.

3. Slumber party attire, informally : PJS
Our word “pajamas” comes to us from the Indian subcontinent, where “pai jamahs” were loose fitting pants tied at the waist and worn at night by locals and ultimately by the Europeans living there. And “pajamas” is another of those words that I had to learn to spell differently when I came to America. In the British Isles the spelling is “pyjamas”.

6. Like most of Wyoming : RURAL
Wyoming is the least populous state, and the tenth largest state in terms of area.

9. Bestow on, to Burns : GIE
Gie is a variant of “give” used sometimes by Scots, and maybe even by Robert Burns.

13. *Cigarette ad claim : LESS TAR
The partially combusted particulate matter, produced as a cigarette burns, forms a resinous material called “tar”. Cigarette tar is different than the tar used on roads, but is very toxic. Marijuana smoke produces a very similar tar to cigarette smoke, and is just as dangerous.

18. Stephen of “The Crying Game” : REA
Stephen Rea is an Irish actor from Belfast. Rea’s most successful role was Fergus in 1992’s “The Crying Game”, for which performance he was nominated for the Best Actor Oscar. In “The Crying Game”, Fergus was a member of the IRA. In real life, Rea was married to IRA bomber and hunger striker Dolours Price at the time he made the movie.

22. Mobiles, stabiles, etc. : ART
In the world of art, a “mobile” is described as a kinetic sculpture as it can move. It can also sit in equilibrium, with heavier elements hanging on the end of rods so that balance is achieved.

Alexander Calder is a sculptor noted for his creation of mobiles. Calder came up with modern sculpture that sat firmly on the ground, and so he called them “stabiles”.

23. Alice, to Dennis the Menace : MOM
25. Henry, to Dennis the Menace : DAD
“Dennis the Menace” is a comic strip that first appeared in 1951, originally drawn by Hank Ketcham. The strip made the jump over the years from the newspaper to television and the silver screen. Dennis’s full name is Dennis Mitchell, and his parents are Henry and Alice (Johnson) Mitchell. Dennis’s nemesis is his neighbor, Mister George Everett Wilson. Hank Ketcham drew his inspiration for the story from his real life. When he introduced the strip he had a 4-year-old son called Dennis, and a wife named Alice.

28. Cheerio-shaped : TORIC
Cheerios breakfast cereal has the distinction of being the first oat-based cereal introduced into the market, hitting the grocery store shelves in 1941. Back then, “Cheerios” were known as CheeriOats.

44. Rebs’ org. : CSA
The Confederate States of America (CSA) set up government in 1861 just before Abraham Lincoln took office. Jefferson Davis was selected as President of the CSA at its formation and retained the post for the life of the government.

45. Bud holder, of sorts : KEG
The American beer called Budweiser is named for the Czech town of Budweis (“České Budějovice” in Czech). The name is the subject of a dispute as here is an original Czech beer with a similar name, Budweiser Budvar. American Budweiser is sold in most European countries as “Bud”.

48. Some Scandinavian coins : ORE
The Swedish Krona is divided into 100 öres, a term derived from the Latin “aureus” meaning “gold”.

The Norwegian and Danish krone are divided into 100 öres.

53. Derby bouquet : ROSES
The first Kentucky Derby was run in 1875, and is a race modelled on the Epsom Derby in England and the Grand Prix de Paris (now called the “Prix de l‘Arc de Triomphe”). As such, The Kentucky Derby was run over 1½ miles, although in 1896 this was shortened to 1¼ miles. The winning horse is presented with a very elaborate blanket made of red roses.

58. Original sin locale : EDEN
In the Christian tradition, “original sin” is the state of sin that exists in all humanity as a result of Adam’s first disobedience in the Garden of Eden. According to the Roman Catholic faith, three people were born without original sin: the Virgin Mary, Jesus Christ and John the Baptist.

Andrew Lloyd Webber’s source material for his hit musical “Cats” was T. S. Eliot’s “Old Possum’s Book of Practical Cats”. Eliot’s collection of whimsical poems was published in 1939, and was a personal favorite of Webber as he was growing up. “Cats” is the second longest running show in Broadway history (“Phantom of the Opera” is the longest and is still running; deservedly so in my humble opinion). my wife and I have seen “Cats” a couple of times and really enjoyed it …

62. Scarfed down : ATE
“To scarf down” is teenage slang from the sixties meaning “to wolf down, to eat hastily”. The term is probably imitative of “to scoff”.

64. Dot follower, on campus : EDU
The .edu domain was one of the six original generic top-level domains specified. The complete original list is:

65. Food factory supply : DYE
Yep, food factories use lots of dyes. How sad is that?