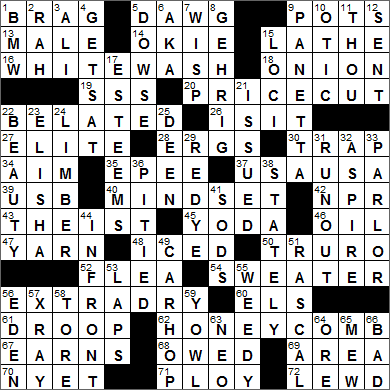 CROSSWORD SETTER: Lynn Lempel
THEME: At the Beauty Parlor … today’s themed answers end with a sequence of steps undertaken to create a hairstyle at a BEAUTY PARLOR, if one had hair!

16A. Tom Sawyer’s bucketful : WHITEWASH
20A. Lure for bargain hunters : PRICE CUT
40A. General way of thinking : MINDSET
56A. Like some champagne : EXTRA DRY
62A. Sweet spot in a hive : HONEYCOMB

Today’s Wiki-est, Amazonian Googlies
Across
5. Terrytoons’ Deputy ___ : DAWG
Deputy Dawg is a cartoon character in the Terrytoon television series. Deputy Dawg is a deputy sheriff in the State of Mississippi. I remember him well as my parents put curtains on the windows in our bedroom when we were very young, curtains which featured the characters Deputy Dawg and Yogi Bear.

14. Sooner State resident, informally : OKIE
“Okies” was a derogatory term used during the Dust Bowl of the 1930s for farming families who migrated from Oklahoma (hence the name), Arkansas, Kansas and Texas in search of agricultural jobs in California. The road used by many of these migrant families was Route 66, which is also called “Mother Road”.

16. Tom Sawyer’s bucketful : WHITEWASH
Early in the story of “The Adventures of Tom Sawyer”, young Tom is punished by his Aunt Polly for dirtying his clothes in a fight. He is made to whitewash the fence surrounding the house.

Tom Sawyer is of course a favorite character created by Mark Twain. He turns up in four of Twain’s books:

18. French ___ soup : ONION
To cook “au gratin” is to prepare something in a shallow dish with a crust of bread or cheese on top. In America we tend to think mainly of potatoes prepared this way, but the technique can be used for many different dishes. Notably, what we call French onion soup is called a “gratinée” in France, an onion soup with some bread and cheese baked on top.

19. Draft org. : SSS
The US government maintains information on all males who are potentially subject to military conscription, using what is called the Selective Service System (SSS). In the event that a draft was held, men registered would be classified into groups to determine eligibility for service. Class 1-A registrants are those available for unrestricted military service. Other classes are 1-A-O (conscientious objector available for noncombatant service), 4-A (registrant who has completed military service) and 4-D (Minister of religion).

27. Privileged few : ELITE
The “elite” are the privileges, the chosen few. The term is French (élite), ultimately deriving from the Latin verb “eligere” meaning “to choose”.

28. Physicists’ work units : ERGS
An erg is a unit of energy or mechanical work. “Erg” comes from the Greek word “ergon” meaning “work”. A dyne is a unit of force. The name “dyne” comes from the Greek “dynamis” meaning “power, force”. Ergs and dynes are related to each other in that one erg is the amount of energy needed to move a force of one dyne over a distance of one centimeter.

35. Olympics sword : EPEE
The épée that is used in today’s sport fencing is derived from the old French dueling sword. In fact, the the sport of épée fencing is very similar to the dualing of the 19th century. The word “épée” translates from French as “sword”.

37. Patriotic chant at the Olympics : USA! USA!
The US has sent a team to every modern Olympic games, starting with the first modern games in 1896 in Athens, Greece. The only exception was the 1980 Summer Olympics held in Moscow, which the US boycotted in protest to the Soviet invasion of Afghanistan.

39. Mac or PC hookup : USB
Universal Serial Bus (USB) is an industry standard dealing with how computers and electronic devices connect and communicate, and deal with electrical power through those connections.

42. “All Things Considered” network : NPR
National Public Radio (now just called NPR) was launched in 1970 after President Johnson signed into law the Public Broadcasting Act of 1967. The intent of the act was to provide funding for radio and television broadcasting that wasn’t simply driven by profit. As a longtime fan of the state-funded BBC in the UK, I’d have to agree with that intent …

“All Things Considered” is the flagship news broadcast by NPR, aired for two hours every evening.

43. Believer in God : THEIST
Broadly speaking, “theism” is the belief that there is at least one god. The term is also used describe the belief in just one god, what is perhaps more accurately referred to as “monotheism”. As such, followers of Christianity, Judaism and Islam would all be classified as theists.

45. “Star Wars” sage : YODA
Yoda is one of the most beloved characters in the “Star Wars” series of films. Yoda’s voice was provided by the great modern-day puppeteer Frank Oz of “Muppets” fame.

50. Beach town that’s home to Cape Cod’s oldest lighthouse : TRURO
Truro is a town in the Outer Cape, close to the northern tip of Cape Cod in Massachusetts. The area was settled in the late 1600s by English colonists who named it for the city of Truro in Cornwall, England. Truro is home to the Highland Light (also called “the Cape Cod Light”), which was the first lighthouse to be built on Cape Cod. The first Highland Lighthouse was built in 1797, and the current structure was erected in 1857. The whole structure had to be moved a tenth of a mile inland in 1996, as it had become endangered by coastal erosion.

56. Like some champagne : EXTRA DRY
Sparkling wines can be classified according to sweetness. These classifications are, from driest to sweetest:

60. Chicago trains : ELS
The Chicago “L” is the second largest rapid transit system in the US, with the New York City Subway being the largest. The “L” is also the second oldest, again with the New York City Subway system having the honor of being around the longest. Note that the official nickname for the system is the “L” (originally short for “elevated railroad”), although the term “El” is also in common use (especially in crosswords as “ELS”). The L is managed by the Chicago Transit Authority (CTA).

67. Takes in, as at the box office : EARNS
The term “box office” may date back to Shakespearean times. In those days long past, patrons would deposit fees for seeing theater performances in boxes. The full boxes would be collected and placed in an office called, imaginatively enough, the “box office”.

Down
1. Parent company of Rolls-Royce : BMW
The acronym BMW stands for Bayerische Motoren Werke, which translates into Bavarian Motor Works. BMW was making aircraft engines during WWI, but had to cease that activity according to the terms of the Treaty of Versailles. The company then started making motorcycles, and moved into automobile production starting in 1928. BMW moved back into aircraft engine manufacturing during the build-up of the Luftwaffe prior to WWII.

3. Louisville’s Muhammad ___ Center : ALI
“The Muhammad Ali Center” is a museum in Ali’s hometown of Louisville, Kentucky. The center was opened in 2005 and explores the life of the champion boxer and features exhibitions that reflect Ali’s core values.

5. Use a divining rod : DOWSE
Dowsing is the practice of divining for not just water, but also buried metals and gemstones for example. Often a dowser will use a Y-shaped or L-shaped rod as a tool, which can also be called a dowser.

6. Letters before an alias : AKA
Also known as (aka)

8. Yankee who was the first major-leaguer to have his number retired : GEHRIG
Baseball legend Lou Gehrig was known as a powerhouse. He was a big hitter and just kept on playing. Gehrig broke the record for the most consecutive number of games played, and he stills holds the record for the most career grand slams. His durability earned him the nickname “The Iron Horse”. Sadly, he died in 1941 at 37-years-old suffering from amyotrophic lateral sclerosis (ALS), an illness we now call “Lou Gehrig’s Disease”.

9. Leon who was Obama’s first C.I.A. director : PANETTA
Leon Panetta was Chief of Staff under President Clinton, and took over as CIA Director in 2009. Panetta has long been interested in protecting the world’s oceans. As an example, he wrote the legislation that created the Monterey Bay National Marine Sanctuary.

11. “All hail, Macbeth, ___ shalt be king hereafter!” : THOU
There is a superstition in the theatrical world that uttering the name “Macbeth” in a theater will bring disaster of some sort. To avoid this, the euphemism “the Scottish Play” is used instead.

23. Actress Cuthbert of “24” : ELISHA
Elisha Cuthbert is a Canadian actress who came to world attention playing Kim Bauer, Jack Bauer’s daughter on TV’s “24”. After “24”, Cuthbert played one of the lead characters on the sitcom “Happy Endings” that ran from 2011 to 2013.

The TV show “24” ran on Fox for eight seasons and ended its run in 2010. Each episode of the show is an hour in the life of counter terrorist agent Jack Bauer, played by Kiefer Sutherland. Fans of the show probably know that a 12-episode series called “24; Live Another Day” started airing on May 5, 2014. Each episode covers an hour in Bauer’s life as before, but there will are “time jumps” to fit the whole series into 12 episodes.

25. Celebrity chef Paula known for Southern cuisine : DEEN
Paula Deen is a celebrity chef from Savannah, Georgia who is noted for her Southern cooking. Deen has been criticized for the amount of salt, fat and sugar in her recipes. The criticism became even more intense when Deen disclosed that she herself has been diagnosed with Type 2 diabetes.

49. Server at a drive-in restaurant : CARHOP
Carhops are servers who bring food to customers in their cars at drive-in restaurants. The first carhops were seen at the Pig Stand restaurant in Dallas, Texas in 1921. These male employees would “hop” onto the running board of cars as they entered the restaurant’s parking lot in order to quickly take the customer’s order, hence the name “carhop”.

56. Biblical garden : EDEN
According to the Book of Genesis, Adam and Eve lived in a garden “in” Eden, with Eden being geographically located by reference to four rivers including the Tigris and the Euphrates. Some scholars hypothesize that Eden was located in Mesopotamia, which encompasses much of modern-day Iraq.

57. Cavity detector : X-RAY
X-rays were first studied comprehensively by the German physicist Wilhelm Röntgen (also “Roentgen”), and it was he who gave the name “X-rays” to this particular type of radiation. Paradoxically, in Röntgen’s native language of German, X-rays are routinely referred to as “Röntgen rays”. In 1901 Röntgen won the first Nobel Prize in Physics that was ever awarded, recognition for his work on X-rays.

63. Prefix with conservative : NEO-
By definition, a neoconservative supports the use of American power and military to bring democracy, liberty, equality and human rights to other countries.