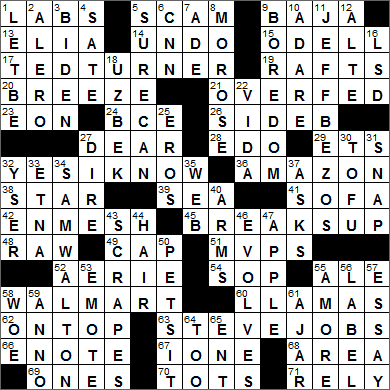 CROSSWORD SETTER: Zhouqin Burnikel
THEME: Big Companies, Big Bosses … today’s themed answers are in pairs that cross each other in the grid. One half of the pair is the name of large company, and the other half is that company’s founder:

Today’s Wiki-est, Amazonian Googlies
Across
9. Lower California, informally : BAJA
Baja California is both the most northern and the most western of the Mexican states. The name translates from Spanish as “Lower California”.

13. “Splendor in the Grass” director Kazan : ELIA
Elia Kazan won Oscars for best director in 1948 for “Gentleman’s Agreement” and in 1955 for “On The Waterfront”. In 1999 Kazan was given an Academy Lifetime Achievement Award. He also directed “East of Eden”, which introduced James Dean to movie audiences, and “Splendor in the Grass” that included Warren Beatty in his debut role.

17. Founder of 6-Down : TED TURNER
(6D. World’s most widely distributed syndicated news service : CNN)
Ted Turner’s big initiative in the world of business was the founding of CNN, the first 24-hour cable news channel. Turner never graduated from college as he was expelled from Brown University for having a female student in his dormitory room. Years later, in 1989, Brown awarded him an honorary B.A.

24. Pre-A.D. : BCE
The designations Anno Domini (AD, “year of Our Lord”) and Before Christ (BC) are found in the Julian and Gregorian calendars. The dividing point between AD and BC is the year of the conception of Jesus, with AD 1 following 1 BC without a year “0” in between. The AD/BC scheme dates back to AD 525, and gained wide acceptance soon after AD 800. Nowadays a modified version has become popular, with CE (Common/Christian Era) used to replace AD, and BCE (Before the Common/Christian Era) used to replace BC.

28. Old name for Tokyo : EDO
Edo is the former name of the Japanese city of Tokyo. Edo was the seat of the Tokugawa shogunate, a feudal regime that ruled from 1603 until 1868. The shogun lived in the magnificent Edo castle. Some parts of the original castle remain and today’s Tokyo Imperial Palace, the residence of the Emperor of Japan, was built on its grounds.

38. Macy’s symbol : STAR
The original Macy’s store was opened by Rowland Hussey Macy in Haverhill, Massachusetts in 1851. This store, and several others that Macy opened, all failed. Macy picked himself up though, and started over again in New York City. Those early New York stores all focused on the sale of dry goods, but added departments quickly as the clientele grew. The Macy’s “star” logo has been around since the company was first established. Macy chose the star because it mimicked the star tattoo that he got as a teenager when he was working on a whaling ship out of Nantucket.

39. Word after Dead or Red : SEA
The Dead Sea is a salt lake that lies over 1,000 feet below sea level in the Middle East. It is one of the saltiest bodies of water in the world, with a salt content that is almost ten times that of the ocean.

60. Andean ruminants : LLAMAS
The wool from a llama is much softer than that from a sheep, and it is also free from lanolin.

63. Founder of 47-Down : STEVE JOBS
(47D. “World’s most admired company,” per Fortune : APPLE)
Steve Jobs certainly was a business icon in Silicon Valley. I don’t think it is too surprising to learn that the brilliant Jobs didn’t even finish his college education, dropping out of Reed College in Oregon after only one semester. Steve Jobs co-founded Apple in 1976, but in 1985 he was basically fired from his own company during the computer sales slump of the mid-eighties. Jobs then founded NeXT Computer, a company focused on supplying workstations to the higher education and business markets. Apple purchased NeXT in 1996, and that’s how Jobs found himself back with his original company.

67. Skye of “Say Anything …” : IONE
Ione Skye is an American actress born in Hertfordshire in England. She is best known for portraying the character Diane Court in the 1989 high school romance movie “Say Anything …”, starring opposite John Cusack. Skye is the daughter of the Scottish folk singer Donovan.

3. Obama’s veep : BIDEN
Vice President Joe Biden was a US Senator representing the state of Delaware from 1973 until he joined the Obama administration. While he was a senator, Vice President Biden commuted to Washington from Wilmington, Delaware almost every working day. He was such an active customer and supporter of Amtrak that the Wilmington Station was renamed as the Joseph R. Biden Railroad Station in 2011. Biden has made over 7,000 trips from that station, and the Amtrak crews were known to even hold the last train for a few minutes so that he could catch it. Biden earned himself the nickname “Amtrak Joe”.

4. Fill to the gills : SATE
“Sate” is a variant of the earlier word “satiate”. Both terms can mean either to satisfy an appetite fully, or to eat to excess.

11. Founder of 36-Across : JEFF BEZOS
(36A. World’s largest online retailer : AMAZON)
As founder of the superb enterprise Amazon.com, Jeff Bezos is an incredibly rich man. Having said that, his salary in 2010 was just a little over $80,000. Compare that with the cost of his personal security detail which was $1.6 million! Bezos made the news in 2013 when he purchased the “The Washington Post” newspaper for $250 million in cash.

16. One may trip on it : LSD
LSD (colloquially known as “acid”) is short for lysergic acid diethylamide. A Swiss chemist called Albert Hofmann first synthesized LSD in 1938 in a research project looking for medically efficacious ergot alkaloids. It wasn’t until some five years later when Hofmann ingested some of the drug accidentally that its psychedelic properties were discovered. Trippy, man …

18. Turkic tongue : UZBEK
Uzbek is the official language of Uzbekistan, and is spoken by about 25 million people, mainly in Central Asia.

22. “Livin’ La ___ Loca” : VIDA
“Livin’ La Vida Loca” is a single recorded by Ricky Martin, the title of which translates as “living the crazy life”.

25. Lover of Psyche : EROS
In the myth of Cupid (aka Eros) and Psyche, the two title characters must overcome many obstacles to fulfill their love for each other. Overcome them they do, and the pair marry and enjoy immortal love.

30. Pretty tasteless food : TOFU
Tofu is another name for bean curd, and is a Japanese word meaning just that … bean that has “curdled”. Tofu is produced by coagulating soy milk, using either salt or something acidic. Once the protein has coagulated, the curds are pressed into the familiar blocks. Personally I love tofu, but my wife, she absolutely hates it …

32. River through Flanders : YSER
The Yser originates in northern France and flows through Belgium into the North Sea. The Yser is often associated with WWI as it figured in a major battle early in the conflict. In the first three months of the war, the German Army pushed almost completely through Belgium, inflicting heavy losses on the Belgian Army as the defenders were forced to fight a fast-moving rearguard action. The Germans were intent on pushing right through Belgium and across France in a “race to the sea”. But the Belgians, with the help of their Allies, decided to make a final stand at the Yser Canal in an effort to prevent the Germans reaching the French ports of Calais and Dunkirk. The 22-mile long defensive line was chosen at the Yser because the river and canal system could be flooded to create a barrier that might be defended. The plan was successful and the front was “stabilized”. As we now know, millions of lives were lost over the coming years with very little movement of that battle line.

33. Italian hothead? : ETNA
Mt. Etna is the largest of three active volcanoes in Italy. Mt Etna is about 2 1/2 times the height of its equally famous sister, Mt. Vesuvius.

34. Founder of 58-Across : SAM WALTON
(58A. World’s biggest private employer : WALMART)
Walmart (previously “Wal-Mart”) takes in more revenue than any other publicly traded company in the world. Over in my homeland, Walmart operates under the name Asda. Walmart’s worldwide headquarters are in Bentonville, Arkansas, the home of Sam Walton’s original Five and Dime. You can actually go into the original store, as it is now the Walmart Visitor Center.

53. Ham it up : EMOTE
The word “ham”, describing a performer who overacts, is apparently a shortened form of “hamfatter” and dates back to the late 1800s. “Hamfatter” comes from a song in old minstrel shows called “The Ham-Fat Man”. It seems that a poorly performing actor was deemed to have the “acting” qualities of a minstrel made up in blackface.

55. Love, to Valentino : AMORE
Rudolph Valentino was an Italian actor who emigrated to the US when he was 18 years old. He developed a Hollywood career in silent movies that propelled him to the status of sex symbol in the twenties. Valentino died very young, having being admitted to hospital with appendicitis and gastric ulcers. He underwent surgery and developed peritonitis, and passed away when he was only 31 years old.

56. Valentino, e.g. : LABEL
Valentino is a fashion house that was founded in Rome in 1959 by Valentino Garavani. The company is now based in Milan.

61. Slightly open : AJAR
Our word “ajar” is thought to come from Scottish dialect, in which “a char” means “slightly open”.