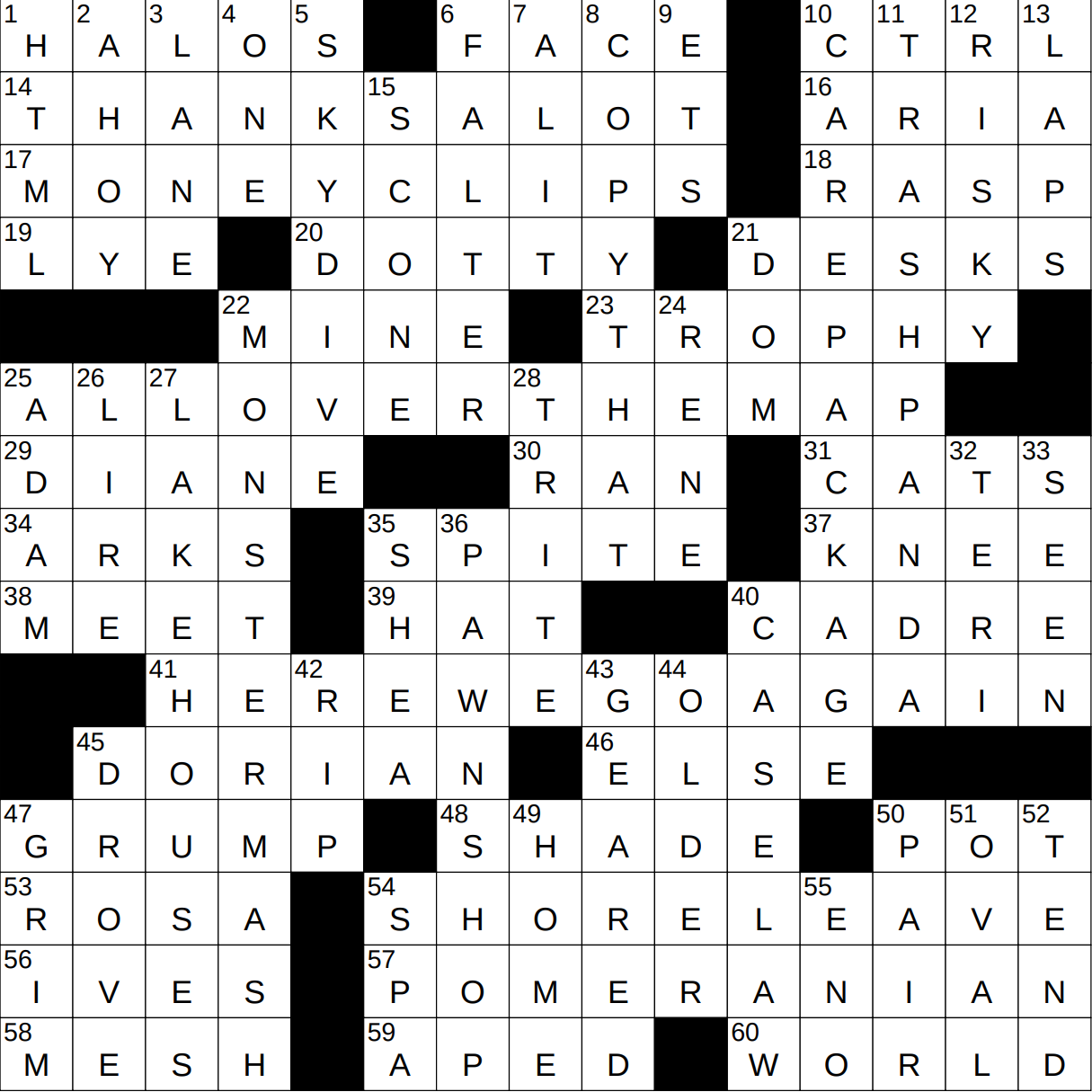 16 Resort hotel with the slogan “This is how we Vegas” : ARIA

The Aria hotel on the Las Vegas Strip opened at the end of 2009. Architecturally, it is noted for a design that minimizes energy consumption. In fact, it is the largest hotel in the world to have earned a LEED Gold certification.

“Black-ish” is a sitcom starring Anthony Anderson and Tracee Ellis Ross that premiered in 2014. The lead actors play Dre and Rainbow Johnson, a married couple leading an upper-middle class black family. The show is noted for tackling tough issues such as racism, police brutality, attitudes toward the LGBT community, and the 2016 US presidential election.

“Old Possum’s Book of Practical Cats” is a 1939 collection of poems by T. S. Eliot (TSE). The collection of whimsical poetry was a favorite of composer Andrew Lloyd Webber when he was a child. Webber used Eliot’s poems as inspiration for his megahit musical “Cats”.

37 Where a doctor might check for a monosynaptic reflex : KNEE

The foot naturally kicks forward when the tendon/muscle at the front of the leg is tapped just below the knee. The kick takes place due to a reflex reaction, an impulse sent along nerves from the site of the tap to the spine and back to the leg muscle, without direct involvement of the brain.

Rosa Bonheur was a painter and sculptor from France who was noted for her works that featured animals as subjects. Bonheur’s two most-famous works are “Ploughing in the Nivernais” depicting a team of oxen, and “The Horse Fair”, depicting some spirited horses.

You might remember the nursery rhyme “As I was going to St. Ives” from the third “Die Hard” movie, “Die Hard With a Vengeance” as it is used as a riddle in the film’s storyline. The rhyme goes like this:

57 Toy from a place that no longer exists : POMERANIAN

1982’s classic science fiction movie “E.T. the Extra-Terrestrial” was directed by Steven Spielberg. The idea behind the film came from Spielberg himself, and the character E.T. was based on an imaginary friend that he conjured up as a child after his parents divorced in 1960.

21 Title for a Benedictine monk : DOM

45 Spent some time in the Outback, perhaps : DROVE

The Subaru Outback is a station wagon with off-road capability that is made by Japan’s Fuji Heavy Industries.

A web browser is a piece of software used to access the World Wide Web. The first web browser was called “WorldWideWeb” and was invented in 1990 by Tim Berners-Lee, the man who created the World Wide Web. The browser known as Mosaic came out in 1993, and it was this browser that drove so much interest in the World Wide Web, and indeed in the Internet in general. Marc Andreessen led the team that created Mosaic, and he then set up his own company called Netscape. Netscape created the Netscape Navigator browser that further popularized the use of the Web starting in 1994. Microsoft responded by introducing Internet Explorer in 1995, which sparked the so-called “browser war”, a war that Microsoft clearly won. As Netscape floundered, the company launched the open-source Mozilla project which eventually led to the Firefox browser. Apple then came out with its own Safari browser in 2003. Google’s Chrome browser, introduced in 2008, is by far the most popular way to view the Web today.