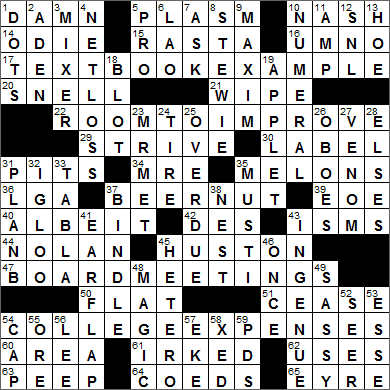 CROSSWORD SETTER: Ethan Cooper
THEME: Tuition and … each of today’s answers starts with a COLLEGE EXPENSE:

17A. Perfect illustration TEXTBOOK EXAMPLE
22A. Unfulfilled potential ROOM TO IMPROVE
37A. Pub tidbit BEER NUT (beer??!!)
47A. Gatherings in which C.E.O.’s are chosen BOARD MEETINGS

Today’s Wiki-est, Amazonian Googlies
Across
5. Blood component PLASM
Plasma (sometimes “plasm”) is the clear, yellow-colored liquid component of blood and lymph in which cells are suspended.

14. Dog bullied by Garfield ODIE
Odie is Garfield’s best friend and is a slobbery beagle, a character in Jim Davis’s comic strip.

15. Snoop Dogg, for one, since 2012 RASTA
I must admit that I don’t really understand Rastafarianism. I do know that a “Rasta”, like Bob Marley, is a follower of the movement. Some say that Rastafarianism is a religion, some not. I also know that it involves the worship of Emperor Haile Selassie I of Ethiopia.

The rap star Snoop Dogg’s real name is Cordozar Calvin Broadus. He is the most famous protege of the notorious rapper Dr. Dre. Sadly, Snoop Dogg has had numerous run-ins with police all round the world, even after he started to live the good life that came with his fame.

20. Fishhook attachment SNELL
A snell is a length of thin line that connects a fishhook to heavier line.

31. Something horrible, with “the” PITS
“The pits” is an American slang term for something really bad, and has been in use since the early fifties. Apparently, “pits” is short for “armpits”.

34. Battlefield food, for short MRE
The Meal, Ready-to-Eat (MRE) comes in a lightweight package that’s easy to tote around. The MRE replaced the more cumbersome Meal, Combat, Individual (MCI) in 1981, a meal-in-a-can. In turn, the MCI had replaced the C-ration in 1958, a less sophisticated meal-in-a-can with a more limited choice.

35. Honeydews, e.g. MELONS
What we call “honeydew” melons are also known as the White Antibes cultivar, especially in France and Algeria where the cultivar has been grown for many years. Antibes is a commune in southeastern France, located between Nice and Cannes.

Fiorello La Guardia was the Mayor of New York from 1934 to 1945, racking up three full terms in office. The famous airport that bears La Guardia’s name was built at his urging, stemming from an incident that took place while he was in office. He was taking a TWA flight to “New York” and was outraged when the plane landed at Newark Airport, in the state of New Jersey. The Mayor demanded that the flight take off again and land at a small airport in Brooklyn. A gaggle of press reporters joined him on the short hop and he gave them a story, urging New Yorkers to support the construction of a new commercial airport within the city’s limits. The new airport, in Queens, opened in 1939 as New York Municipal, often called “LaGuardia” as a nickname. The airport was officially relabeled as “LaGuardia” in 1947.

40. With the concession that ALBEIT
“Albeit”is a conjunction meaning “although, even if”. The term dates back to the 1300s, when it was a contraction of the phrase “al be it” meaning “although it be that”.

42. Palais ___ Sports (Paris arena) DES
The Palais de Sports in Paris is an indoor sports arena that was built in 1960. At the time it was the largest venue in the city.

45. John who directed “The Maltese Falcon” HUSTON
Movie director John Huston was also a prolific screenwriter and an actor. Unusually, Huston directed his father Walter Huston, and his daughter Anjelica Huston. Walter appeared in “The Maltese Falcon” (1941) and “The Treasure of the Sierra Madre” (1948). Anjelica was in “Prizzi’s Honor” (1985).

The classic detective novel “The Maltese Falcon” was written by Dashiell Hammett and first published in 1930. The main character if of course Sam Spade, famously played by Humphrey Bogart in the third movie adaptation of the book, released in 1941.

61. Got the goat of IRKED
Someone who “gets your goat” makes you annoyed or angry. The most-often cited etymology of the phrase lies with the practice of placing goats with racehorses to keep them calm. A trickster who wanted a horse to race badly would steal the goat, causing the horse to become unsettled and race badly.

65. Literary Jane EYRE
“Jane Eyre” is the celebrated novel written by Charlotte Brontë, under the pen name Currer Bell. Over the years, I’ve shared here on my blogs that the “Jane Eyre” story line is a little too dark and Gothic for my taste, but a very persuasive blog reader convinced me to look more at the romantic side of the story and give it a second chance. I watched a wonderful 4-hour television adaptation of the novel made by the BBC a while back and I have to say that because I was focused on the relationship between Jane and Rochester, I was able to push past the Gothic influences (that depress me) so I really enjoyed the story. I thoroughly recommend the 2006 BBC adaptation to fans of the novel.

Down
1. Parts of an ellipsis DOTS
An ellipsis is a series of dots (usually three) used to indicate an omission in some text. The term comes from the Greek word “élleipsis”, which means “omission”.

2. Yemeni port ADEN
Aden is a seaport in Yemen, located on the Gulf of Aden by the eastern approach to the Red Sea. Aden has a long history of British rule, from 1838 until a very messy withdrawal in 1967. A native of Aden is known as an Adeni. Some believe that Cain and Abel are buried in the city.

6. China’s ___-tzu LAO
Lao Tse (also Lao-Tzu) was a central figure in the development of the religion/philosophy of Taoism.

8. “Family Guy” baby STEWIE
“Family Guy” is a very successful animated show on television. It was created by Seth MacFarlane, the same guy who came up with “American Dad!”. My kids love them both. Me, I can’t stand ‘em.

9. “It takes money to make money,” e.g. MAXIM
Our word “maxim” meaning “precept, principle” has been around since the early 1600s. The term ultimately derives from the Latin phrase “maxima popositio”, literally “greatest premise”.

11. Bit of sound equipment AMP
An electric guitar, for example, needs an amplifier (amp) to take the weak signal created by the vibration of the strings and turn it into a signal powerful enough for a loudspeaker.

12. Show on which Lennon and McCartney considered reuniting, for short SNL
The Beatles broke up in 1970. Lorne Michaels, the creator of “Saturday Night Live”, appeared on the show one Saturday and offered to pay the Beatles $3,000 to reunite for one appearance on SNL to sing three songs. Unbeknownst to Michaels, Paul and Linda McCartney were visiting with John Lennon in Lennon’s New York City apartment, and they saw the show. Apparently, Lennon and McCartney actually considered getting into a cab and going over to NBC studios to “gatecrash” the show, that was still airing live. But, they concluded that they were too tired …

18. Rorschach test image BLOT
The Rorschach test is a psychological test in which a subject is asked to interpret a series of inkblots. The test was created by Swiss Freudian psychoanalyst Hermann Rorschach in the 1920s.

23. Citi Field mascot MR MET
Mr. Met is the mascot of the New York Mets. He is a guy with a large baseball as a head, and has been elected to the Mascot Hall of Fame.

Citi Field is the relatively new baseball stadium used by the New York Mets, and sits right next door to Shea stadium, where the Mets had played for decades. And the name of course comes from sponsor Citigroup.

26. Wind instruments OBOES
The oboe is perhaps my favorite of the reed instruments. The name “oboe” comes from the French “hautbois” which means “high wood”. When you hear an orchestra tuning before a performance you’ll note (pun intended!) that the oboe starts off the process by playing an “A”. The rest of the musicians in turn tune to that oboe’s “A”.

33. Indian drum TABLA
A tabla is a percussion instrument used in the Indian subcontinent. The tabla consists of a pair of hand drums and is similar to bongos.

37. Hobo’s accessory BINDLE
“Bindle” is the name given to that bag or sack that the stereotypical hobo carried on a stick over his shoulder. “Bindle” is possibly a corruption of “bundle”.

43. Naive young woman INGENUE
So often in literature, the movies and on stage there is an innocent woman at the the center of the story. Such stock characters came to be known as ingénues, a term derived from the French adjective “ingénu” meaning innocent, virtuous, candid and “ingenuous”.

49. Smart-alecky SASSY
Apparently the original “smart Alec” (sometimes “Aleck”) was Alec Hoag, a pimp, thief and confidence trickster who plied his trade in New York City in the 1840s.

53. “To be,” in Latin ESSE
The Latin term “in esse” is used to mean “actually existing”, and translates as “in being”.

56. Appomattox surrenderer LEE
The Battle of Appomattox Court House was the last engagement by the Army of Northern Virginia, led by Confederate General Robert E. Lee. Immediately after the battle, Lee surrendered to Union General Ulysses S. Grant. When the two men met for the signing of the surrender documents, even though the pair were acquaintances, it was the first time they had seen each other in almost 20 years. Grant started off the conversation by discussing a previous meeting they had during the Mexican-American War, when they were fighting on the same side.

57. Barely manage, with “out” EKE
To “eke out” means to “make something go further or last longer”. For example, you could eke out your income by cutting back on expenses. I always have a problem with the commonly cited definition of “eke out” as “barely get by”. Close but no cigar, I say …

“To cop” was northern British dialect for “to seize, catch”. This verb evolved in the noun “copper”, describing a policeman, someone who catches criminals. “Copper” was shortened to “cop”.