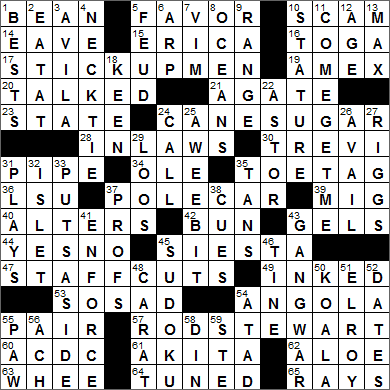 Today’s Wiki-est, Amazonian Googlies
Across
1. Noggin BEAN
A slang term for a “head” might be “bean” or “noggin”.

16. Frat house party wear TOGA
In Ancient Rome the classical attire known as a toga (plural “togae”) was usually worn over a tunic. The tunic was made from linen, and the toga itself was a piece of cloth about twenty feet long made from wool. The toga could only be worn by men, and only if those men were Roman citizens. The female equivalent of the toga was called a “stola”.

19. Visa or MasterCard rival, informally AMEX
Amex is short for American Express. In dollar terms, there are more transactions conducted in the US using the Amex card than any other card.

21. Tiny type size AGATE
In the world of typography, “agate” is a unit of measure. One agate is is equal to 5.5 points, or about one quarter of an inch. Agate is generally the smallest type size used in newspapers, and is generally restricted to advertisements and market reports in financial publications.

24. Sweet rum component CANE SUGAR
Rum was first distilled by slaves on the sugarcane plantations of the Caribbean in the 1800s, with the tradition being that the very first production came from Barbados.

30. Rome’s ___ Fountain TREVI
The Trevi Fountain is a huge fountain in Rome, the largest constructed in the Baroque style. The tradition is that if one throws a coin in the fountain then one is guaranteed a return visit to the city. Tourists throw in an amazing 3,000 euros (over $4,000) every day. The money is collected and is used to stock a supermarket for the needy of the city.

31. Appurtenance for Santa or Sherlock Holmes PIPE
An appurtenance is an accessory, perhaps a piece of equipment for a specific task. It might also be an appendage, a suffix to a word, for example.

34. Cheer for a torero OLE!
“Matador” is a Spanish word used in English for a bullfighter, although the term isn’t used in the same way in Spanish. The equivalent in Spanish is “torero”. “Matador” translates aptly enough as “killer”.

37. Indy 500 leader POLE CAR
The term “pole position” is used in motor racing. It refers to position of the vehicle at the front of the starting grid, the pole car. The term originated with horse racing. The fastest horse to qualify in a race was given the inside track on the course, the position next to the pole at the starting line.

45. South-of-the-border nap SIESTA
We use the word “siesta” to describe a short nap in the early afternoon, taking the word from the Spanish. In turn, the Spanish word is derived from the Latin “hora sexta” meaning “the sixth hour”. The idea is that the nap is taken at “the sixth hour” after dawn.

54. Coastal land south of Congo ANGOLA
Angola is a country in south-central Africa, on the west coast. Angola is the fourth largest diamond exporter in Africa, after Botswana, the Congo and South Africa. Such a valuable export hasn’t really helped the living standard of the country’s citizens as life expectancy and infant mortality rates are among the poorest on the continent.

The Republic of the Congo is a Central-African country. Prior to 1960, the country was a colony of France known as the French Congo.

57. British rocker with the 1979 #1 hit “Da Ya Think I’m Sexy?” ROD STEWART
The English singer Rod Stewart first achieved success with the Jeff Beck Group in the late sixties before launching a solo career while recording with a new lineup called Faces. Stewart is an ardent soccer fan, and actually supports the Scottish national team (Rod’s father was Scottish). Stewart plays the game himself, playing for a team called the LA Exiles along with a few other celebrities. He even kicks autographed soccer balls into the audience at his concerts.

60. Electrical adapter letters AC/DC
If you have a laptop with an external power supply then that big “block” in the power cord is an AC/DC converter. It converts the AC current you get from a wall socket into the DC current that is used by the laptop.

61. Japanese dog breed AKITA
The Akita breed of dog is named for its point of origin, the Akita Prefecture in Japan. When Helen Keller visited Japan in 1937, she asked for and was given an Akita breed of dog, with the name of Kamikaze-go. Sadly, the dog died within a year from distemper. The following year the Japanese government officially presented Keller with a replacement dog. Supposedly Keller’s dogs were the first members of the breed to be introduced into the US.

62. ___ vera (skin soother) ALOE
Aloe vera has a number of alternate names that are descriptive of its efficacy as a medicine. These include the First Aid plant, Wand of Heaven, Silent Healer and Miracle Plant.

Down
1. Opposite (or synonym) of worsts BESTS
Oddly enough, “to worst” someone is “to best” them. And yet, the adjective “worst” has the opposite meaning to the adjective “best”. You have to feel sorry for someone learning English as a second language …

3. St. Teresa of ___ AVILA
St. Teresa of Avila (also known as St. Teresa of Jesus) was a Carmelite nun living in Spain in the 1500s. She is particularly noted for her writings on Christian meditation and mental prayer.

6. Dadaist artist Jean ARP
Hans Arp was a French artist renowned for his work with torn and pasted paper, although that wasn’t the only medium he used. Arp was the son of a French mother and German father and spoke both languages fluently. When he was speaking German he gave his name as Hans Arp, but when speaking French he called himself Jean Arp. Both “Hans” and “Jean” translate into English as “John”. In WWI Arp moved to Switzerland to avoid being called up to fight, taking advantage of Swiss neutrality. Eventually he was told to report to the German Consulate and fill out paperwork for the draft. In order to get out of fighting, Arp messed up the paperwork by writing the date in every blank space on the forms. Then he took off all of his clothes and walked with his papers over to the officials in charge. He was sent home …

8. Atlantic and Pacific OCEANS
The earliest known mention of the name “Atlantic” for the world’s second-largest ocean was in Ancient Greece. The Greeks called the ocean “the Sea of Atlas” or “Atlantis thalassa”.

22. Fur trader John Jacob ___ ASTOR
John Jacob Astor was the father of the famous American Astor dynasty. He was the country’s first multi-millionaire, making his fortune in the trade of fur, real estate and opium. In today’s terms, it has been calculated that by the time of his death he has accumulated a fortune big enough to make him the fourth wealthiest man in American history (in the company of the likes of Andrew Carnegie, Cornelius Vanderbilt, Bill Gates, Henry Ford and John D. Rockefeller).

27. Bobby who lost 1973’s Battle of the Sexes tennis match RIGGS
Bobby Riggs was a World No. 1 tennis player in the thirties and forties, both as an amatuer and a professional. However, Riggs is best remembered for playing “The Battle of the Sexes” match against Billie Jean King in 1973. Riggs was defeated by King in three straight sets.

29. Eton johns LOOS
When I was growing up in Ireland, a “bathroom” was a room that had a bath and no toilet. The separate room with the commode was called “the toilet” or sometimes the W.C. (the water closet). Apparently the term closet was used because in the 1800s when homeowners started installing toilets indoors they often displaced clothes and linens in a “closet”, as a closet was the right size to take the commode. It has been suggested that the British term “loo” comes from Waterloo (water-closet … water-loo), but no one seems to know for sure. Another suggestion is that the term comes from the card game of “lanterloo” in which the pot was called the loo!

The use of “john” as a slang term for a toilet is peculiar to North America. “John” probably comes from the older slang term of “jack” or “jakes” that had been around since the 16th century. In Ireland, in cruder moments, we still refer to a toilet as “the jacks”.

31. “Hamlet” and “Macbeth” PLAYS
“Hamlet” is William Shakespeare’s longest play, and was also one of most popular of the playwright’s works during his own lifetime.

45. Numerical puzzle with a 9×9 grid SUDOKU
Number puzzles similar to our modern-day Sudoku first appeared in French newspapers in the late 1800s. The format that we use today was created by Howard Garns, a 74-year-old freelance puzzle constructor from Connersville, Indiana and first published in 1979. The format was introduced in Japan in 1984 and given the title of “Sūji wa dokushin ni kagiru”, which translates to “the digits are limited to one occurrence”. The rather elaborate Japanese title was eventually shortened to Sudoku. No doubt many of you are fans of Sudoku puzzles. I know I am …

48. Gem weight CARAT
A carat is a unit of mass used in measuring gemstones that is equal to 200 mg.

50. Down Under “bear” KOALA
The koala bear really does look like a little bear, but it’s not even closely related. The koala is an arboreal marsupial and a herbivore, native to the east and south coasts of Australia. Koalas aren’t primates, and are one of the few mammals other than primates who have fingerprints. In fact, it can be very difficult to tell human fingerprints from koala fingerprints, even under an electron microscope. I’m a little jealous of the koala, as it sleeps up to 20 hours a day …

51. Jetson boy of 1960s TV ELROY
On the cartoon show “The Jetsons”, young Elroy wore a cap with an antenna sticking out of it.

52. Results of using eHarmony DATES
eHarmony is a high-profile online dating service based in Pasadena, California.

54. Not very much A TAD
Back in the 1800s “tad” was used to describe a young child, and this morphed into our usage of “small amount” in the early 1900s. The original use of “tad” for a child is very likely a shortened version of “tadpole”.

56. German’s “Oh my!” ACH!
The German exclamation “ach!” is usually translated into English as “oh!”

59. Sault ___ Marie, Ont. STE
Sault Ste. Marie is the name of two cities on either side of the Canada-US border, one in Ontario and the other in Michigan. The two cities were originally one settlement in the 17th century, established by Jesuit Missionaries. The missionaries gave the settlement the name “Sault Sainte Marie”, which can be translated as “Saint Mary’s Falls”. The city was one community until 1817, when a US-UK Joint Boundary Commission set the border along the St. Mary’s River.