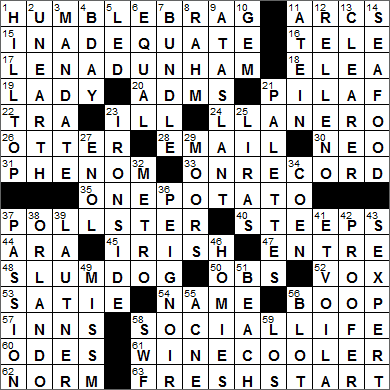 Today’s Wiki-est, Amazonian Googlies
Across
1. Self-praise couched in self-deprecation, in modern lingo HUMBLEBRAG
The term “humblebrag”, meaning “self-deprecating boast”, was coined by Harris Wittels, a writer for the sitcom “Parks and Recreation”.

11. Story lines ARCS
A story arc is a continuing storyline in say a television show that has a number of episodes. Story arcs are also found in comics, books, video games, and other forms of media.

17. 2013 Golden Globe winner for “Girls” LENA DUNHAM
Lena Dunham is a co-star in the HBO series “Girls”, and is also the show’s creator. Dunham garnered a lot of attention for herself during the 2012 US Presidential election cycle as she starred in ad focused on getting out the youth vote. In the spot she compared voting for the first time with having sex for the first time.

18. Colony in ancient Magna Graecia ELEA
The Ancient Greek city of Ele became known as Elea, before getting the Latin name of Velia. Velia was known as home to the celebrated philosophers Parmenides and Zeno of Elea, who belonged to the Eleatic school.

19. “Downton Abbey” title LADY
Fans of the wonderful TV drama “Downton Abbey” will be very familiar with the exterior appearance of Highclere Castle in Hampshire. Highclere is used as the location for exterior and many interior shots of the fictitious Grantham residence called Downton Abbey. The exterior of Highclere is very reminiscent of the Houses of Parliament building in London. That similarity exists because the house was largely rebuilt from 1839 to 1842 by architect Sir Charles Barry soon after he finished work on the refurbished Houses of Parliament.

20. Four-star figs. ADMS
There are commonly four ranks of admiral in a navy. These are, in descending order:

21. Risotto relative PILAF
“Pilaf” is a Persian word, and we use it to describe rice that is browned in oil and then cooked in a seasoned broth.

24. South American cowboy LLANERO
A llanero is a herdsman from Venezuela or Colombia. “Llanero” comes from “Llanos”, the South American grasslands. “Llano” is the Spanish word for “plain”.

26. Animal that may swim on its back OTTER
The fur of the sea otter is exceptionally thick. It is in fact the densest fur in the whole animal kingdom.

30. ___-soul (style of Erykah Badu and Lauryn Hill) NEO
Erykah Badu is the stage name of Erica Wright, an American “neo-soul” singer. Badu gained some notoriety in March of 2010 when she shot a scene for a music video in Dallas. In the scene, she walks to the spot where President Kennedy was assassinated, removing her clothes until she is nude, and then falls to the ground as if she has been shot in the head. For that stunt she was charged with disorderly conduct.

Lauryn Hill is a ars she spent as singer-songwriter from South Orange, New Jersey who is best known as a member of the band called the Fugees (from 1994 to 1996). Off stage, Hill is known for having five children with Rohan Marley, the son of reggae icon Bob Marley. She was also in the public eye in 2010 when she served 3 months in jail for tax evasion.

35. Beginning of a process of elimination ONE POTATO
“One Potato” is a counting out game designed to select a person who is “it” in a kid’s game. The selection depends on the rhyme:

44. Coach Parseghian ARA
Ara Parseghian coached the Notre Dame football team from 1964 to 1974, a period known as “The Era of Ara”.

45. 44-Across’s “Fighting” team IRISH
The athletic teams of the University of Notre Dame in South Bend, Indiana are known as the Fighting Irish. There are several debated etymologies for the moniker “Fighting Irish”, with the most generally accepted being that it was applied by the press in the 1920s, reflecting the teams’ fighting spirit and grit, determination and tenacity. I guess “grit, determination and tenacity” are characteristics often associated with the Irish.

47. Between, to Balzac ENTRE
Honoré de Balzac was a French novelist and playwright from the 19th century. Balzac wrote a huge collection of related novels called “La Comédie humaine”.

52. ___ pop VOX
The Latin phrase “vox populi” translates as “voice of the people”. The expression is used in the world of broadcasting to describe interviews with members of the public.

53. Contemporary and compatriot of Debussy SATIE
Erik Satie was a French composer most famous for his beautiful composition, the three “Gymnopédies”. I have tried so hard to appreciate other works by Satie but I find them so very different from the minimalist simplicity of the lyrical “Gymnopédies”.

56. Toon toned down for the 1930s Hays Code BOOP
Betty Boop made her first appearance on the screen in 1930, in a cartoon called “Dizzy Dishes”. Her character was modeled on the the It-girl, the sexy Clara Bow of movie fame. Back then Betty Boop was a sexy poodle and it wasn’t until 1932 that she morphed into completely human form. Betty was quite the risqué figure, but her vampish ways only lasted a few years. When the Production Code of 1934 came into force, Betty started to dress more modestly and toned down her behavior.

62. Christie novel title that, without spaces, is a man’s name N OR M?
“N or M?” is a 1941 novel by the Queen of Crime, Agatha Christie. The protagonists in the piece are Christie’s detectives Tommy and Tuppence Beresford.

Down
3. Obamacare obligation MANDATE
Under the legislation known as Obamacare, individuals are required to have minimum essential medical insurance coverage, or face a penalty. Employers with more than 50 employees are required to offer medical insurance coverage, or face a fine. These requirements are known as the act’s individual and employer mandates.

4. Fourth of July, for Calvin Coolidge, informally B-DAY
President Calvin Coolidge, the only US President to have been born on July 4th, was known as a man of few words. It was while he was serving as Vice-President to in the administration of Warren G. Harding, that Coolidge earned the nickname “Silent Cal”. There is a famous story told about Coolidge’s reticence that I would love to think is true, attributed to the poet Dorothy Parker. Sitting beside him at dinner, she remarked to him, “Mr. Coolidge, I’ve made a bet against a fellow who said it was impossible to get more than two words out of you.” His famous reply: “You lose.”

8. First name in Chicago politics RAHM
The current Mayor of Chicago, Rahm Emanuel, was an Illinois representative in the US House before resigning to take up President Obama’s offer to become the White House Chief of Staff.

23. Nickname for Oliver Cromwell IRONSIDE
Oliver Cromwell played a unique role in British history, ruling the nation as Lord Protector from 1653 to 1658. Cromwell basically had the same powers as a monarch, but he had no crown. Known by many as “Old Ironsides”, Cromwell fought in the English Civil War on the side of the Roundheads (the Parliamentarians) against the Cavaliers (the Royalists). The Parliamentarians emerged victorious, King Charles I was executed, and a few years later, Cromwell came to power. The monarchy was restored in 1658 after the Cromwell died, and Charles II was installed on the throne.

25. Turkish dough LIRAS
The word “lira” is used in a number of countries for currency. “Lira” comes from the Latin for “pound” and is derived from a British pound sterling, the value of a Troy pound of silver. For example, the lira (plural “lire”) was the official currency of Italy before the country changed over to the euro in 2002.

27. Unstable compound ENOL
An enol is an alkene with a hydroxyl group, sort of part-alkene and part-alcohol. The term “enol” therefore, is a portmanteau of “alkene” and “alcohol”.

34. Either director of “True Grit” COEN
I think it’s great to see two brothers working together and being so successful. Joel and Ethan Coen are two movie producers and directors who both live in New York City. The Coen brothers do love the movie-making business and they even married industry “insiders”. Ethan’s wife is film editor Tricia Cooke, and Joel is married to one of my favorite actresses, the lovely Frances McDormand.

The classic 1969 western movie “True Grit” starring John Wayne is a screen adaptation of a 1968 novel by Henry Hathaway. The Coen brothers made another big screen adaption of the novel in 2010 starring Jeff Bridges in the Rooster Cogburn role previously played by John Wayne.

36. Negligee PEIGNOIR
A peignoir is a loose dressing gown sometimes worn by a woman. The term “peignoir” comes from “peigner”, the French for “to comb the hair”. The idea was that a peignoir was worn by a lady while she was combing her hair before retiring.

38. Sentinel’s place ORLANDO
Orlando in Central Florida is the largest inland city in the state. Orlando was the most visited city in the US in 2009, mainly as the city and environs has many theme parks including Walt Disney World, Universal Studios Florida and SeaWorld.

The “Orlando Sentinel” is the main newspaper circulating in Central Florida.

39. Taylor of “Twilight” LAUTNER
Taylor Lautner is the actor who plays Jacob Black in “The Twilight Saga” series of films. Lautner is also a martial arts expert.

43. Dr. Ruth, for one SEXPERT
Dr. Ruth Westheimer is a German sex therapist who made a name for herself as a media personality. Westheimer is the daughter of Orthodox Jews and was sent away from Germany by her family just before WWII. She ended up in Palestine and participated in the 1948 Palestine War serving as a scout and sniper. Westheimer was seriously wounded, and spent several months unable to walk. She moved to France in 1950, and soon after arrived in the US. It was in the US where she did her training as a sex therapist.

46. Bros HOMIES
“Homie” is short for “homeboy”, someone from one’s home neighborhood, or “crib”.

49. “Divine” showbiz persona MISS M
One of my favorite singers, and indeed all-round entertainers, is Bette Midler. If you’ve ever seen her live show you’ll know that “camp” is a good word to describe it, as her humor is definitely “out there” and quite bawdy. Early in her career, Midler spent years singing in the Continental Baths, a gay bathhouse in New York City. There she became very close friends with her piano accompanist, Barry Manilow. While singing in the bathhouse, Bette only wore a white towel, just like the members of her audience. It was in those days that she created her famous character “the Divine Miss M” and also earned herself the nickname “Bathhouse Betty”.