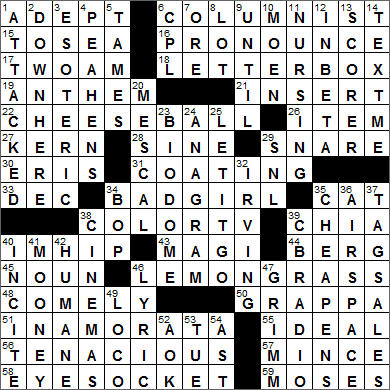 Today’s Wiki-est, Amazonian Googlies
Across
15.: Words repeated after “I shall no more,” in “The Tempest”: TO SEA
William Shakespeare’s play “The Tempest” tells the story of Prospero, who was removed from the throne of Milan and banished to a deserted island along with his daughter Miranda. Prospero learns sorcery while cast away, and eventually conjures up a tempest that drives those who usurped his throne onto the island’s shores (in particular his own brother, Antonio). On the island, Prospero is eventually successful in revealing Antonio’s lowly nature.

26.: Pair: ITEM
An unmarried couple known to be involved with each other might appear in the gossip columns. This appearance as “an item” in the papers, led to the use of “item” to refer to such a couple, but only since the very early seventies.

30.: Source of conflict, in antiquity: ERIS
In Greek mythology, Eris is the goddess of strife and discord. The name “Eris” is derived from the Greek word for strife, and translates into Latin as “Discordia”. In Greek her counterpart is Harmonia, and in the world of the Roman gods, Concordia. The largest dwarf planet in our solar system is called Eris, named after the goddess.

33.: 12/: DEC
December is the twelfth month in our calendar but was the tenth month in the old Roman calendar, hence the name (“decem” is Latin for “ten”). Back then there were only ten months in the year. “Ianuarius” (January) and “Februarius” were then added as the eleventh and twelfth months of the year. Soon after, the year was reset and January and February became the first and second months.

38.: Invention that prompted NBC to adopt the peacock logo: COLOR TV
The National Broadcasting Company (NBC) has had a number of different logos in its history, including the famous peacock with which we are familiar today. The first peacock logo was introduced in the early days of color television and was designed to illustrate how wonderful color television would be, so go buy one! (NBC was owned by RCA, and so had a vested interest in sales of color television sets).

39.: ___ seeds, ingredients in some health drinks: CHIA
Chia is a flowering plant in the mint family. Chia seeds are an excellent food source and are often added to breakfast cereals and energy bars. There is also the famous Chia Pet, an invention of a San Francisco company. Chia Pets are terracotta figurines to which are applied moistened chia seeds. The seeds sprout and the seedlings become the “fur” of the Chia Pet.

43.: Star followers: MAGI
“Magi” is the plural of the Latin word “magus”, a term applied to someone who was able to read the stars. Hence, magi is commonly used with reference to the “wise men from the East” who followed the star and visited Jesus soon after he was born.

44.: Something that’s fallen off a shelf?: BERG
An iceberg is a large piece of freshwater ice that is floating freely after having broken off from a glacier or ice shelf. Out use of “iceberg” comes from the Dutch word for the same phenomenon “ijsberg”, which translates literally as “ice mountain”.

46.: Herb used in Thai food: LEMONGRASS
Lemongrass is a perennial grass that is used in Asian cuisines because of its citrus flavor.

50.: Italian after-dinner drink: GRAPPA
Grappa is an Italian brandy that is made by distilling the skins, pulps, seeds and stems that are left over from winemaking after the grapes have been pressed. .

51.: Party to a tryst: INAMORATA
“Inamorata” is an Italian term that we’ve imported into English. It describes a female lover. An “innamorato” is a male lover.

In its most general sense, a tryst is a meeting at an agreed time and place. More usually we consider a tryst to be a prearranged meeting between lovers. The term comes from the Old French “triste”, a waiting place designated when hunting.

55.: Toy company that introduced Rubik’s Cube: IDEAL
What was originally called the “Magic Cube” became better known as Rubik’s Cube, named for its inventor Ernő Rubik. Rubik’s Cube is the world’s biggest selling puzzle game, with over 350 million sold in just over 30 years.

56.: Like bulldogs: TENACIOUS
The bulldog breed of dog has been around at least since 1500. Back then, bulldogs were used in the “sport” of bull baiting. Dogs would be set on a tethered bull to see which bulldog could latch onto the bull’s nose and drag it to the ground. Bull baiting was outlawed in England in 1835.

59.: One advised to take two tablets: MOSES
According to the Bible’s Book of Exodus, the stone tablets on which the Ten Commandments were inscribed were placed in a chest called the Ark of the Covenant. The Ark was built according to instructions given by God to Moses on Mount Sinai. The tablets that were preserved were actually copies, as Moses smashed the originals given to him by God. Moses did so in a fit of anger when when he saw his people worshiping the Golden Calf.

Down
4.: Ones involved in an elaborate courtship: PEAHENS
The female peafowl, the peahen, has very dull plumage compared to the extravagant display on the tail of the peacock. The young of a peacock and peahen is known as a peachick (there’s a surprise!).

6.: Radar’s rank on “M*A*S*H”: Abbr.: CPL
Corporal Radar O’Reilly is a character in the “M*A*S*H” television series and film. The role was played by Gary Burghoff in both the film and on television.

8.: Universal area: LOT
I think that the Backlot Tour at Universal Studios Hollywood is the most fun “ride” in any California theme park. There are stops along the tour that have been developed just to impress visitors, but the tour also takes you through the working part of the studio. I like viewing sets from some famous films, such as “Psycho”, “Back to the Future”, “The Sting” and “How the Grinch Stole Christmas”.

10.: Kitchen brand: MOEN
The Moen line of faucets was started in 1956 by inventor Alfred M, Moen. It was Moen who invented the first single-handed mixing faucet.

12.: Still being tested: IN BETA
In the world of software development, the first tested issue of a new program is usually called the “alpha” version. Expected to have a lot of bugs that need to be fixed, the alpha release is usually distributed to a small number of testers. After reported bugs have been eliminated, the refined version is called a “beta” and is released to a wider audience, but with the program clearly labeled as “beta”. The users generally check functionality and report further bugs that are encountered. The beta version feeds into a release candidate, the version that is tested just prior to the software being sold into the market, bug-free. Yeah, right …

20.: Agave product: MESCAL
Mezcal (also “mescal”) is a distilled spirit made from the agave plant that is native to Mexico. Tequila is a type of mezcal, one distilled specifically from the blue agave.

23.: Montreal eco-tourist attraction: BIODOME
The Montreal Biodome is housed in a building that was built for the cycling and judo events in the 1976 Summer Olympics. It is an indoor exhibit that allows visitors to walk through four ecosystems found in the Americas:

32.: Classic storyteller who wrote under the pseudonym Knickerbocker: IRVING
Washington Irving was an author best-known for the short stories “Rip Van Winkle” and “The Legend of Sleepy Hollow”. Irving also wrote respected biographies of George Washington, Oliver Goldsmith and Muhammad. Beyond his work as a writer, Irving also served as US ambassador to Spain from 1842 to 1846.

39.: Box in a cab: CB RADIO
A CBer is someone who operates a Citizens’ Band radio. In 1945, the FCC set aside certain radio frequencies for the personal use of citizens. The use of the Citizens’ Band increased throughout the seventies as advances in electronics brought down the size of transceivers and their cost. There aren’t many CB radios sold these days though, as they have largely been replaced by cell phones.

41.: Comedian Paul: MOONEY
Paul Mooney is a comedian who appeared on “Chappelle’s Show” and who also wrote for the great comedian Richard Pryor.

47.: Teller of many tales: GRIMM
The Brothers Grimm (Jacob and Wilhelm) were two German academics noted for collecting and publishing folk tales. Among the tales in their marvelous collection are “Snow White and the Seven Dwarfs”, “Sleeping Beauty” and “Cinderella”.

52.: [Thumbs up]: A-OK
Our term “A-OK” is supposedly an abbreviation for “A(ll systems are) OK”, and arose in the sixties during the Space Program.

53.: End of many a long race: Abbr.: TUE
Election Day was chosen by Congress back in 1845. The month of November was selected as it suited an agricultural society, following the fall harvest and yet not too far into winter, which could make travel difficult. Tuesday was chosen so that people had time to travel to polling stations. Monday elections might have meant that some would have to start out on Sunday, and that could interfere with Christian services.

54.: P.E.I. setting: AST
Atlantic Standard Time (AST) is four hours behind Greenwich Mean Time and one hour ahead of Eastern Standard Time. The list of locations that use AST includes Puerto Rico and the Canadian provinces of New Brunswick and Nova Scotia.

Prince Edward Island (PEI) is a maritime Canadian province. The island at the center of the province was named for Prince Edward, the fourth son of King George III and the father of Queen Victoria.