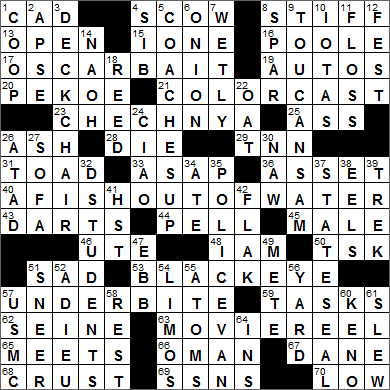 CROSSWORD SETTER: Ian & Katie Livengood
THEME: A Fish out of Water … if you follow the instructions given by the last word of today’s themed answers, in sequence, you end up with A FISH OUT OF WATER:

17A. Film designed to attract Academy Awards consideration : OSCAR BAIT
21A. Like most TV shows starting in the 1960s : COLORCAST
57A. Problem with teeth alignment : UNDERBITE
63A. Projection room item : MOVIE REEL

Today’s Wiki-est, Amazonian Googlies
Across
1. Rude dude : CAD
Our word “cad”, meaning “a person lacking in finer feelings”, is a shortening of the word “cadet”. “Cad” was first used for a servant, and then students at British universities used “cad” as a term for a boy from the local town. “Cad” took on its current meaning in the 1830s.

4. Trash-hauling boat : SCOW
A scow is a flat-bottomed boat with squared-off ends that’s often used for transportation, usually pushed or pulled by a barge. Often a scow can be seen carrying junk or garbage.

15. Skye of “Say Anything …” : IONE
Ione Skye is an American actress born in Hertfordshire in England. She is best known for portraying the character Diane Court in the 1989 high school romance movie “Say Anything …”, starring opposite John Cusack. Skye is the daughter of the Scottish folk singer Donovan.

16. English Channel port town : POOLE
Poole is a seaport in the county of Dorset on the English south coast. Poole played an important role during WWII as it was one of the main points of departure for the D-Day landings in Normandy.

19. BMW and VW : AUTOS
The acronym BMW stands for Bayerische Motoren Werke, which translates into Bavarian Motor Works. BMW was making aircraft engines during WWI, but had to cease that activity according to the terms of the Treaty of Versailles. The company then started making motorcycles, and then moved into automobile production starting in 1928. BMW moved back into aircraft engine manufacturing during the build-up of the Luftwaffe prior to WWII.

20. “Orange” tea : PEKOE
A pekoe (or more commonly, orange pekoe) is a medium-grade black tea. There is no orange flavor in an orange pekoe tea. The “orange” name most likely derived from the name of the trading company that brought the tea to Europe from Asia.

21. Like most TV shows starting in the 1960s : COLORCAST
“To colorcast” is to broadcast (a television program) in color.

23. War-torn part of Russia : CHECHNYA
Chechnya is a federal subject of Russia located in the North Caucasus in the very southwest of the country. The capital of Chechnya is Grozny. In the days of the USSR, Chechnya was part of the Chechen-Ingush Autonomous Soviet Socialist Republic (ASSR). The former ASSR was subsequently divided into the Chechen Republic and the Republic of Ingushetia. The Chechen Republic declared independence from the Russian Federation, which resulted in the First Chechen War, fought from 1994 to 1996. Boris Yeltsin’s government in Moscow signed a peace treaty ending the war and ceding autonomy to Chechnya. However, Chechnya-based Islamic fighters invaded Dagestan in 1999, at which point Russian troops entered Chechnya again, starting the Second Chechen War. The second conflict raged until 2009, when the Russians withdrew many of their troops having severely disabled the capabilities of the Chechen separatists.

29. Cable TV’s Heartland, formerly : TNN
Heartland is a country-music oriented television channel that is a revival of the Nashville Network (TNN) that operated from 1983 to 2000. Heartland has been on the air since 2012.

43. Pub game : DARTS
Darts is a wonderful game often played in English and Irish pubs, even over here in America. The scoring in a traditional game of darts is difficult to describe in a sentence or two, but the game of darts called “Round the Clock” is simply hitting the numbers 1 through 20 in sequence.

44. ___ Grant (college financial aid) : PELL
Pell Grants are awarded by the federal government to students with financial need so that they can attend college. The grant is named for Senator Claiborne Pell, who sponsored the bill that introduced aid for students.

46. Colorado tribe : UTE
The Ute are a group of Native American tribes that now reside in Utah and Colorado. The Ute were not a unified people as such, but rather a loose association of nomadic groups.

62. River flowing beneath Paris’s Pont Neuf : SEINE
Paradoxically, Pont Neuf is the oldest bridge standing today that crosses the River Seine in Paris. The paradox is that the name translates to “new bridge”. The bridge is in two parts, as it crosses from the Left Bank to the Île de la Cité (on which stands Notre Dame) and then from the Île de la Cité to the Right Bank.

67. Hamlet, for one : DANE
The full title of William Shakespeare’s play that we tend to call “Hamlet” is “The Tragedy of Hamlet, Prince of Denmark”. It is the most performed of all Shakespeare’s plays and it is also his longest, comprising a full five acts.

68. Pizza part often eaten last : CRUST
Pizza was invented in Naples where it has a long tradition that goes back to Ancient Rome. During an 1889 visit to Naples, Queen Margherita of Savoy was served a special pizza that was created with toppings designed to mimic the colors of the Italian flag. The ingredients of tomato (red), mozzarella (white) and basil (green) can still be found together on menus today on a pie usually named Pizza Margherita after the queen. I do love basil on my pizza …

Down
2. Vaulted church area : APSE
The apse of a church or cathedral is a semicircular recess in an outer wall, usually with a half-dome as a roof and often where there resides an altar. Originally apses were used as burial places for the clergy and also for storage of important relics.

9. Avian Froot Loops mascot : TOUCAN SAM
Toucan Sam is the mascot of Kellogg’s Froot Loops breakfast cereal, and he can be seen on the front of every box.

10. Specks : IOTAS
Iota is the ninth letter in the Greek alphabet. We use the word “iota” to portray something very small as it is the smallest of all Greek letters.

11. Dental string : FLOSS
Dental floss has been around a long time, with the term “dental floss” being introduced in the early 1800s. Anyone fond of the writings of James Joyce (that wouldn’t be me!) might recall a character using dental floss in his famous novel “Ulysses” that was published between 1918 and 1920.

12. Suffix with Oktober or Ozz : FEST
Oktoberfest is a 16-day beer festival in Munich that actually starts in September. About six million people attend every year, making it the largest fair in the world. I’ve been there twice, and it really is a great party …

Ozzfest is a festival tour held annually that was founded by Ozzy and Sharon Osbourne. As one might expect, it’s a heavy metal and hard rock event.

18. Bassoon, e.g. : REED
Our modern bassoon first appeared in the 1800s and has had a place in the concert orchestra ever since.

22. Quaker cereal grain : OAT
The Quaker Oats Company was founded in 1901 when four oat mills merged, including the Quaker Mill Company of Ravenna, Ohio. Quaker Mill’s owner Henry Parsons Crowell played the key role in the new company and remained at the helm until 1943.

24. Informal goodbye : CIAO
“Ciao” is the Italian for “‘bye”. “Arrivederci” is more formal, and translates as “goodbye”.

26. Only minimally : A TAD
Back in the 1800s “tad” was used to describe a young child, and this morphed into our usage of “small amount” in the early 1900s. The original use of “tad” for a child is very likely a shortened version of “tadpole”.

34. Chowed down : ATE
“Chow” is an American slang term for food that originated in California in the mid-1800s. “Chow” comes from the Chinese pidgin English “chow-chow” meaning “food”.

35. Paddy wagon : POLICE VAN
The use of the phrase “paddy wagon” dates back to the 1900s, and is American in origin. The exact derivation is disputed, although it seems to be agreed that the use of “paddy” relates to the derogatory term “Paddy” used for an Irishman. The question seems to be whether the Irish connection is due to the large numbers of Irishmen in early American police forces, or due to the large number of Irishman who ended up in the back of the police van under arrest. I’ll say nothing …

37. Louisiana’s has a nesting pelican with three chicks : STATE SEAL
The Seal of Louisiana features a mother brown pelican, and three chicks. The mother is portrayed wounding her breast so that she can feed her young from her own blood.

38. Morays, e.g. : EELS
Morays are a large group of about 200 species of eels found across the world’s oceans. They are carnivorous and look pretty scary but they’re quite shy when confronted and present no threat to humans. One interesting thing about morays is that they will sometimes work in cooperation with the grouper fish found in reefs, the two helping each other hunt for food.

42. ___ jacket (protective wear) : FLAK
“Flak” was originally an acronym from the German term for an aircraft defense cannon (FLiegerAbwehrKanone). Flak then became used in English as a general term for antiaircraft fire, and ultimately a term for verbal criticism as in “to take flak”.

49. Pass (out) : METE
To “mete out” is to distribute by allotments. The verb comes from the Old English word “metan” meaning “to measure”, which is also believed to be the root of our word “meter”.

52. Formal goodbye : ADIEU
A formal way to say “farewell” in english might be “adieu”. “Adieu” is the French for “goodbye”, from “à Dieu” meaning “to God”.

54. Wheels for big wheels : LIMOS
The word “limousine” actually derives from the French city of Limoges. The area around Limoges is called the Limousin, and it gave its name to a cloak hood worn by local shepherds. In early motor cars, a driver would sit outside in the weather while the passengers would sit in the covered compartment. The driver would often wear a limousin-style protective hood, giving rise to that type of transportation being called a “limousine”. Well, that’s how the story goes anyway …

60. Gambling game whose name spells a gambling town when the first letter is changed : KENO
The name “Keno” has French or Latin roots, with the French “quine” being a term for five winning numbers, and the Latin “quini” meaning “five each”. The game originated in China and was introduced into the West by Chinese immigrants who were working on the first Transcontinental Railroad in the 1800s.

The city of Reno’s economy took off when open gambling was legalized in Nevada in 1931. Within a short time, a syndicate had built the Bank Club in Reno, which was the largest casino in the whole world at the time.