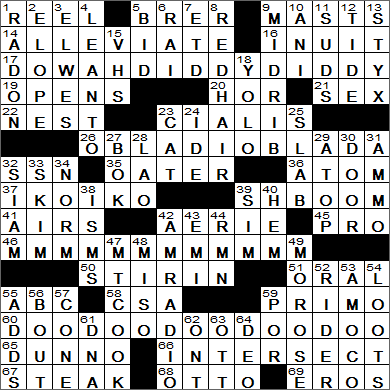 CROSSWORD SETTER: Gareth Bain
THEME: Dooby Doo Songs … each of today’s themed answer is a song title that is full of nonsense syllables:

Today’s Wiki-est, Amazonian Googlies
Across
1. React to a haymaker : REEL
A haymaker is a wide, swinging punch. It is so called because the action involves using one’s weight and shoulder power to deliver the blow, with a motion much like using a scythe to cut hay.

5. “Song of the South” appellation : BR’ER
Br’er Rabbit and Br’er Fox are characters in the Uncle Remus stories, written by Joel Chandler Harris. The Uncle Remus stories are adaptations of African American folktales that Harris collected across the Southern States. “Br’er” of course stands for “brother”.

“Song of the South” is a 1946 Disney film based on the Uncle Remus stories by Joel Chandler Harris. The move features a mix of live actors and animated characters. The song “Zip-a-Dee-Doo-Dah” is the big hit from the “Song of the South”, and won the Best Song Oscar in 1947.

9. Pair on a yawl : MASTS
A yawl is a two-masted sailing vessel. There is a main mast forward, and a smaller mizzen mast close to the stern.

16. Many a Greenlander : INUIT
The Inuit peoples live in the Arctic, in parts of the US, Russia, Greenland and Canada.

Greenland is the largest island in the world. Geographically, Greenland is part of the continent of North America, but culturally and politically is considered part of Europe. The island became a Danish colony in 1815, and joined the European Economic Community (EEC) with Denmark. Greenland withdrew from the EEC after a referendum in 1983. Since 2009, Greenland has been relatively autonomous, with the Danish government retaining control of foreign affairs, defence and the judicial system.

17. 1964 hit for Manfred Mann : DO WAH DIDDY DIDDY
“Do Wah Diddy Diddy” is song that was originally recorded by an American group called the Exciters in 1963. The more famous cover version was released the following year by British group Manfred Mann. It’s a great, great song …

23. Viagra rival : CIALIS
Cialis and Viagra are not just brands competing against each other, they also have differing active ingredients. Viagra is a trade name for Sildenafil citrate, and Cialis is tadalafil. Both drugs are used to treat erectile dysfunction, and more recently for treating pulmonary arterial hypertension.

26. 1968 song from the Beatles’ “White Album” : OB-LA-DI, OB-LA-DA
“Ob-La-Di, Ob-La-Da” was one of many songs credited to Lennon/McCartney that was actually written by just one of the pair. Paul McCartney wrote this one, a song that John Lennon really did not like at all. Apparently Lennon was quite obstructionist during the recording of the song and even walked out at one point.

32. ID thief’s target : SSN
The main purpose of a Social Security Number (SSN) is to track individuals for the purposes of taxation, although given its ubiquitous use, it is looking more and more like an “identity number” to me. The social security number system was introduced in 1936. Prior to 1986, an SSN was required only for persons with substantial income so many children under 14 had no number assigned. For some years the IRS had a concern that a lot of people were claiming children on their tax returns who did not actually exist. So, from 1986 onward, it is a requirement to get an SSN for any dependents over the age of 5. Sure enough, in 1987 seven million dependents “disappeared”.

35. Flick with a duel, maybe : OATER
The term “oater” that is used for a western movie comes from the number of horses seen, as horses love oats!

39. 1954 hit for the Chords : SH-BOOM
The great song “Sh-Boom” is also known as “Life Could Be a Dream”. It was written and recorded by the Chords in 1954. “Sh-Boom” was also recorded in that same year by the Crew-Cuts. Many regard it as the first doo-wop song to break into the top ten of the pop charts.

42. Place for high living? : AERIE
An aerie is the nest of an eagle, and is also known as an “eyrie”.

55. “They’re ___ Delicious!” (Alpha-Bits slogan) : ABC
Alpha-Bits is a Post breakfast cereal that is made from bits of corn cereal in alphabet shapes.

58. Ex-president Tyler sided with it: Abbr. : CSA
The Confederate States of America (CSA) set up government in 1861 just before Abraham Lincoln took office. Jefferson Davis was selected as President of the CSA at its formation and retained the post for the life of the government.

67. Dish sometimes served au poivre : STEAK
The traditional French dish called a “pepper steak” or “steak au poivre” is usually a filet mignon coated with cracked peppercorns prior to cooking. The filet is mostly pan-fried, and often a pan sauce is made to cover the steak by adding cognac and heavy cream to the residue left in the bottom of the pan after the steak has cooked. “Poivre” is French for “pepper”.

Down
1. Cause of some poisoning : RADON
Radon is a radioactive gas, a byproduct produced when uranium decays naturally in the earth. Radon gas can collect and accumulate in buildings and rooms that are particularly well insulated with very little air exchange. The danger is very real, as radon is listed as the second most frequent cause of lung cancer after cigarette smoke.

3. Cary who played Robin Hood : ELWES
Cary Elwes is an English actor, most noted for appearing in the 1987 film “The Princess Bride”. Cary is the son of a celebrated English portrait painter, Dominick Elwes.

6. Bollywood star Aishwarya ___ : RAI
Not only is Aishwarya Rai one of Bollywood’s highest-paid actresses, she is a a former Miss World, having won the pageant in 1994.

Bollywood is the informal name given to the huge film industry based in Mumbai in India. The term “Bollywood” is a melding of “Bombay”, the old name for Mumbai, and of course “Hollywood”.

10. Singer DiFranco : ANI
Ani DiFranco is a folk-rock singer and songwriter. DiFranco has also been labeled a “feminist icon”, and in 2006 won the “Woman of Courage Award” from National Organization of Women.

13. River ferried by Charon : STYX
The River Styx of Greek mythology was the river that formed the boundary between the Earth and the Underworld (or “Hades”). The souls of the newly dead had to cross the River Styx in a ferry boat piloted by Charon. Traditionally, a coin would be placed in the mouths of the dead “to pay the ferryman”.

“Carpe diem” is a quotation from Horace, one of Ancient Rome’s leading lyric poets. “Carpe diem” translates from Latin as “seize the day” or “enjoy the day”.

24. Chemical suffix : -IDE
In chemistry, when a metal combines with a non-metal, the non-metal is often given the suffix -ide. One example would be iron oxide (common rust).

28. Vientiane native : LAO
Vientiane is the capital city of Laos, situated on the famous Mekong River. The city was originally called the “city of sandalwood” by Buddhist monks, naming after the valued trees that grew in the area. The French took the Pali words for “city of sandalwood” and rewrote it as the French-sounding “Vientiane”.

39. Alastair of “A Christmas Carol” : SIM
As far as I am concerned, the definitive screen adaptation of the Charles Dickens novella “A Christmas Carol”, is the 1951 film of the same name starring the wonderful actor Alastair Sim as Ebenezer Scrooge. If you don’t own it, you have got to buy it for next Christmas!

43. U.K. record label : EMI
EMI was a British music company, with the acronym originally standing for Electric and Musical Industries.

44. Watergate inits. : RMN
President Richard Milhous Nixon (RMN) used “Milhous” in his name in honor of his mother Hannah Milhous. Richard was born in a house in Yorba Linda, California. You can visit that house today as it is on the grounds of the Richard Nixon Presidential Library. It’s a really interesting way to spend a few hours if you ever get to Yorba Linda …

48. Soup served at a sushi bar : MISO
Miso is the name of the seasoning that makes the soup. Basic miso seasoning is made by fermenting rice, barley and soybeans with salt and a fungus (!) to produce a paste. The paste can be added to stock to make miso soup, or perhaps to flavor tofu.

53. BP merger partner of 1998 : AMOCO
Amoco is an abbreviation for the American Oil Company. Amoco was the first oil company to introduce gasoline tanker trucks and drive-through filling stations. I wonder did they know what they were starting …?

57. Baskin-Robbins order : CONE
The Baskin-Robbins chain of ice cream parlors is the largest in the word. The chain was founded by Burt Baskin and Irv Robbins in Glendale, California in 1945. The company started using the slogan “31 flavors” in 1953, suggesting that a customer could order a different flavor of ice cream on every day of every month.

61. “CSI” test subject : DNA
I’ve always been fascinated by the fact that the DNA of living things is so very similar across different species. Human DNA is almost exactly the same for every individual (to the degree of 99.9%). However, those small differences are sufficient to distinguish one individual from another, and to determine whether or not individuals are close family relations.

The “CSI” franchise of TV shows has been tremendously successful, but seems to be winding down. “CSI: Miami” (the “worst” of the franchise, I think) was cancelled in 2012 after ten seasons. “CSI: NY” (the “best” of the franchise) was cancelled in 2013 after nine seasons. The original “CSI: Crime Scene Investigation”, set in Las Vegas, is still going strong and has been doing so since 2000.

62. It borders four Great Lakes: Abbr. : ONT
The Canadian province of Ontario takes its name from the Great Lake. In turn, Lake Ontario’s name is thought to be derived from “Ontari:io”, a Huron word meaning “great lake”. Ontario is home to the nation’s capital of Ottawa as well as Toronto, Canada’s most populous city (and the capital of the province).