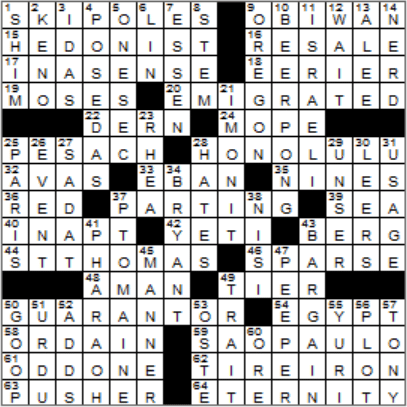 CROSSWORD SETTER: Matt Ginsberg
THEME: Red Sea Parting … today’s themed answers are related to the Biblical story of the PARTING of the RED SEA. Also, we have the RED SEA in the middle of the grid, with a PARTING in the middle:

Today’s Wiki-est, Amazonian Googlies
Across
9. First name in “Star Wars” : OBI-WAN
Obi-Wan Kenobi is one of the more beloved of the “Star Wars” characters. Kenobi was portrayed by two fabulous actors in the series of films. As a young man he is played by Scottish actor Ewan McGregor, and as an older man he is played by Alec Guinness.

15. One who’s just out for a good time : HEDONIST
A hedonist is someone who seeks to maximise the amount of pleasure in his or her life. “Hedone” is the Greek word for “pleasure”.

18. More Serling-esque : EERIER
Rod Serling was the man behind, and in front of, the iconic science-fiction TV series “The Twilight Zone”. Serling used a lot of the shows he created to advance his strongly held views against war (he was a soldier in WWII), and against racism and censorship.

19. Leader of a noted 37-Across : MOSES
37A. See 19- and 54-Across and 11- and 41-Down : PARTING (of the RED SEA)
Moses is an important prophet in Christianity and Islam, and the most important prophet in Judaism. It fell to Moses to lead the Israelites out of slavery in Egypt across the Red Sea. He was given the Ten Commandments on Mount Sinai, and then wandered the desert with his people for forty years. Moses then died within sight of the Promised Land.

22. “Nebraska” star, 2013 : DERN
Bruce Dern is a Hollywood actor with quite a pedigree. Dern is the grandchild of former Utah governor and Secretary of War, George Henry Dern. Bruce’s godparents were Adlai Stevenson and Eleanor Roosevelt!

“Nebraska” is a really interesting 2013 movie starring Bruce Dern as an elderly man who heads to Lincoln, Nebraska to collect a million-dollar sweepstakes prize that is clearly a scam. This one is filmed in black & white, which adds to the mood nicely. I note that a local movie theater here did a one-day showing of a color version.

25. Feast of unleavened bread : PESACH
Pesach is an alternative name for Passover.

28. Southernmost U.S. capital : HONOLULU
Honolulu is the largest city in Hawaii, and the state capital. Located on the island of Oahu, the name “Honolulu” translates from Hawaiian as “place of shelter, calm port, sheltered bay”.

32. Gardner namesakes : AVAS
Ava Gardner is noted for her association with some big movies, but also for her association with some big names when it came to the men in her life. In the world of film, she appeared in the likes of “Mogambo” (1953), “On the Beach” (1959), “The Night of the Iguana” (1964) and “Earthquake” (1974). The men in her life included husbands Mickey Rooney, Artie Shaw and Frank Sinatra. After her marriages had failed (and perhaps before!) she had long term relationships with Howard Hughes and bullfighter Luis Miguel Dominguin whom she met through her friend Ernest Hemingway.

33. Nonmusical Abba : EBAN
Abba Eban was an Israeli diplomat and politician, born Aubrey Solomon Meir Eban in Cape Town, South Africa. While working at the United Nations after WWII, Eban changed his given name to “Abba”, the Hebrew word for “father”. He made this change as reportedly as he could see himself as the father of the nation of Israel.

35. Diamond complements : NINES
There are nine players on a baseball team.

36. – : RED
37. See 19- and 54-Across and 11- and 41-Down : PARTING
39. – : SEA
The Red Sea (sometimes called the Arabian Gulf) is a stretch of water lying between Africa and Asia. The Gulf of Suez (and the Suez Canal) lies to north, and the Gulf of Aden to the south. According to the Book of Exodus in the Bible, God parted the Red Sea to allow Moses lead the Israelites from Egypt.

42. Subject of a onetime Nepali hunting license [true fact!] : YETI
A yeti is a beast of legend, also called an abominable snowman. “Yeti” is a Tibetan term, and the beast is fabled to live in the Himalayan regions of Nepal and Tibet. Our equivalent legend in North America is that of Bigfoot, also known as Sasquatch. The study of animals whose existence have not yet been substantiated is called cryptozoology.

43. Belated observation of 4/14/12 : BERG
A mill pond is a reservoir for a mill that is powered by water, often created by building a mill dam across a river or stream. The term “mill pond” is also used in the expression “it’s like a mill pond”, meaning that the water is flat and calm. Famously, the words, “It’s like a mill pond” were uttered by Captain Edward Smith, not long before his ship (the Titanic) hit an iceberg …

46. Like the people of Siberia : SPARSE
Siberia is a vast area in Northern Asia. The region’s industrial development started with the construction of the Trans-Siberian railway from 1891 to 1916, which linked Siberia to Russia in the west.

59. 2014 World Cup host : SAO PAULO
São Paulo is the largest city in Brazil. São Paulo is also the city with the highest number of helicopters in the world. This is partly driven by the horrendous traffic jams in São Paulo, but also by the wealthy having a very real fear of being kidnapped on the city’s streets.

63. Airplane with the propeller at the back : PUSHER
Many early aircraft had a “pusher configuration”, meaning that the propeller was mounted behind the engine “pushing” the aircraft through the air. Such a configuration is still popular in ultralight designs and drone aircraft.

64. “As if you could kill time without injuring ___”: Thoreau, “Walden” : ETERNITY
Henry David Thoreau is a personal hero of mine. Thoreau is best known for his book called “Walden” published in 1854. The book outlines his philosophy of life and details his experiences living in a cabin near Walden Pond just outside Concord, Massachusetts.

Down
2. Many a state lottery game : KENO
The name “Keno” has French or Latin roots, with the French “quine” being a term for five winning numbers, and the Latin “quini” meaning “five each”. The game originated in China and was introduced into the West by Chinese immigrants who were working on the first Transcontinental Railroad in the 1800s.

3. Mythical Greek who slew Castor : IDAS
In Greek mythology, Idas was one of the Argonauts, noted for participating in the hunt for the Calydonian Boar. He also fought with the twins Castor and Pollux, causing the death of Castor, the mortal of the pair of brothers.

6. Hoopster Jeremy : LIN
Jeremy Lin is a professional basketball player with the Houston Rockets. Lin is the first American of Chinese descent to play in the NBA.

7. European city of 500,000+ whose name translates as “to eat” : ESSEN
Essen is a large industrial city located on the River Ruhr in western Germany.

“Essen” is the German word for “to eat”.

9. Snake’s place, in part : OREGON
The Snake River in the US northwest is the largest tributary of the Columbia River.

10. Party game : BEER PONG
The game of beer pong is also known as “Beirut”. Beer pong reputedly originated as a drinking game in the fraternities of Dartmouth College in the fifties, when it was played with paddles and a ping pong net on a table. The origin of the “Beirut” name is less clear, but it probably was coined in while the Lebanese Civil War was raging in late seventies and the eighties.

13. Captain’s direction : ALEE
“Alee” is the direction away from the wind. If a sailor points into the wind, he or she is pointing “aweather”.

14. Filmdom’s Napoleon Dynamite, for one : NERD
“Napoleon Dynamite” is a comedy film released in 2004 that stars Jon Heder in the title role. The movie was a commercial success above and beyond expectations. “Napoleon Dynamite” was made on the relatively low budget of about $400,000, and yet grossed almost $45 million within a year. The title character is a nerdy high school student who spends much of life living in his fantasy world.

The Yom Kippur War started on October 6 in 1973 with a surprise move by Syria and Egypt into the Sinai Peninsula and the Golan Heights. The conflict quickly escalated into a confrontation between the US and the Soviet Union, as both superpowers rushed arms to the opposing states. Within a week, Israeli forces had regained the land that had been lost and two weeks later had advanced within striking range of both Cairo and Damascus. A UN brokered ceasefire brought the war to an end on October 25, after just 19 days of fighting.

29. Last name of three Indianapolis 500 winners : UNSER
The Unser family seems to have racing cars in its blood. Al Unser, Sr. won the Indy 500 on four occasions. Al’s brother Jerry was the first of the Unsers to compete at Indianapolis. Al’s other brother Bobby, won the Indy three times. Al’s son, Al Junior, won the Indy twice. Al Junior’s son is also a racing driver who competes at the Indy Speedway.

34. Bear on a field : BRYANT
Bear Bryant was head coach for the University of Alabama for almost 25 years, from 1958 to 1983. Sadly, Bryant passed away unexpectedly just a few weeks after he retired as Alabama coach.

37. Product of organic decay : PTOMAINE
“Ptomaine” is the name given to foul-smelling nitrogenous substances that are generated by bacteria when animal or plant matter decays.

38. Pending, as a legal decree : NISI
A decree nisi is a court order, one that only comes into force when certain specified conditions are met. At the point where the conditions are met, it becomes a decree absolute and is binding. “Nisi” is Latin for “unless”.

51. Language from which “cummerbund” comes : URDU
A cummerbund is a sash worn around the waist by some men, usually with a dinner jacket or tuxedo. Cummerbands came to us from Afghanistan in the early 1600s.

55. First name in space : YURI
The Russian cosmonaut Yuri Gagarin became the first man in space when his spacecraft Vostok I made a single orbit of the Earth in 1961. Sadly, Gagarin died only seven years later in a plane crash.

56. What cabalists do : PLOT
A cabal is a small group of secret plotters, perhaps scheming against a government or an individual.

57. One of eight for Stephen Sondheim : TONY
Stephen Sondheim has won more Tony Awards than any other composer, a total of eight. He has a long list of stage (and big screen) successes including “A Funny Thing Happened on the Way to the Forum”, “A Little Night Music”, “Sweeney Todd” and “Into the Woods”. Sondheim is big fan of crosswords and had a whole series of cryptic crosswords published in “New York” magazine in the sixties.