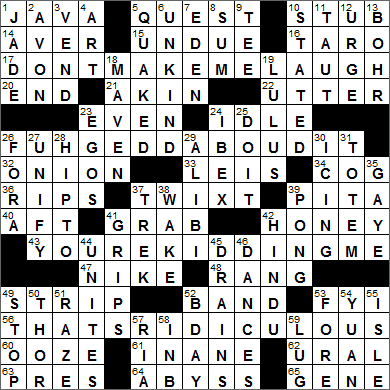 CROSSWORD SETTER: Bruce Haight
THEME: No Way! … today’s answers each go with the clue “No way!”

Today’s Wiki-est, Amazonian Googlies
Across
1. The “joe” of a cup of joe : JAVA
It seems that no one really knows why we refer to coffee as “joe”, but we’ve been doing so since early in WWII.

Back in 1850, the name “java” was given to a type of coffee grown on the island of Java, and the usage of the term spread from there.

16. Poi plant : TARO
The corm of some taro plants is used to make poi, the traditional Hawaiian dish (that I think tastes horrible). When a taro plant is grown as an ornamental, it is often called Elephant Ears due to the shape of its large leaves.

26. “No way!” : FUHGEDD ABOUD IT!
I guess that “fuhgedd aboud it!” is a way that someone might say “forget about it!” in Brooklynese.

32. Popular satirical news source, with “The” : ONION
“The Onion” is a satirical news network, with a print newspaper and a heavy online presence. “The Onion” newspaper was founded by two college students at the University of Wisconsin-Madison in 1988. The founders sold the operation a year later for about $20,000. The paper grew steadily until 1996 when it began to publish online and really took off. I think it’s worth a tad more than $20,000 today …

33. Maui mementos : LEIS
“Lei” is the Hawaiian word for “garland, wreath”, although in more general terms a “lei” is any series of objects strung together as an adornment for the body.

Maui is the second largest of the Hawaiian Islands. Maui is sometimes called the “Valley Isle” as it is composed of two volcanoes to the northwest and southeast of the island, each with numerous beautiful valleys carved into them.

39. Gyro bread : PITA
Pita is a lovely bread in Middle-Eastern and Mediterranean cuisines. Pita is usually round, and has a “pocket” in the center. The pocket is created by steam that puffs up the dough during cooking leaving a void when the bread cools. The pockets were a big hit in the seventies when someone came up with the idea of using them for fillings hence creating pita sandwiches or “pita pockets”.

47. Big name in sneakers : NIKE
Nike was the Greek goddess of victory, often referred to as the Winged Goddess of Victory. The athletic shoe company Nike uses the “Nike swoosh” as its logo, which is based on the goddess’s wing.

52. The Eagles or the Byrds : BAND
The Eagles band formed in 1971, with the founding members being Glenn Frey, Don Henley, Bernie Leadon and Randy Meisner. Frey and Henley were hired as session musicians by Linda Ronstadt. The four then played live together backing Ronstadt in a gig at Disneyland in 1971, and recorded their debut album together in England the following year.

62. Russia’s ___ Mountains : URAL
The eastern side of the Ural Mountains in Russia is generally regarded as the natural divide between the continents of Europe and Asia.

63. Air Force One passenger: Abbr. : PRES
We usually use the term “Air Force One” for the purpose-built military aircraft that transports the president, although any plane can use the call sign, provided the president is aboard. There was an incident in 1953 which a flight carrying President Eisenhower (flight no. Air Force 8610) flew close to commercial airliner (flight no. Eastern 8610). In order to avoid confusion of flight numbers in the future, the special callsign “Air Force One” was created.

65. Heredity unit : GENE
A gene is a section of a chromosome that is responsible for a particular characteristic in an organism. For example, one gene may determine eye color and another balding pattern. We have two copies of each gene, one from each of our parents, with each copy known as an allele.

Down
1. Green stone : JADE
Jade is actually the name given to two different mineral rocks, both of which are used to make gemstones. The first is nephrite, a mineral with a varying degree of iron content, the more iron the greener the color. The second is jadeite, a sodium and aluminum-rich pyroxene. As well as being used for gemstones, both jade minerals can be carved into decorative pieces.

2. Stratford-upon-___ : AVON
There are actually four rivers called the Avon in England, but “Shakespeare’s Avon” lies mainly in Warwickshire. The name “Avon” comes from the Old English word for a river, “abona”. Stratford-upon-Avon was William Shakespeare’s birthplace.

6. Grinchlike : UNKIND
The Grinch is the title character in Dr. Seuss’s 1957 children’s book “How the Grinch Stole Christmas!” Based on Seuss’s hero, we now use the term “grinch” for anyone opposed to Christmas festivities or coarse and greedy in general.

7. Idyllic garden : EDEN
According to the Book of Genesis, Adam and Eve lived in a garden “in” Eden, with Eden being geographically located by reference to four rivers including the Tigris and the Euphrates. Some scholars hypothesize that Eden was located in Mesopotamia, which encompasses much of modern-day Iraq.

8. 15, for any row, column or diagonal here:
4 9 2
3 5 7
8 1 6
: SUM
A magic square is a series of numbers arranged in a square so that all lines of numbers, including diagonals, add up to the same total. Such squares have been used for centuries to create talismans designed to bring good luck.

13. Physics Nobelist Niels : BOHR
The physicists Niels Bohr and Albert Einstein had a series of public debates and disputes in the twenties and thirties. Although the two respected each other very highly, they held very different views on quantum theory, different views on the laws of physics at the atomic level. The passage of time has shown that Einstein lost these debates.

18. Expert : MAVEN
I’ve always loved the word “maven”, another word for an expert. Maven comes into English from the Yiddish “meyvn” meaning someone who appreciates and is a connoisseur.

19. Doozies : LULUS
We call a remarkable thing or a person a “lulu”. The term is used in honor of Lulu Hurst, the Georgia Wonder, who was a stage magician active in the 1880s.

Eleanora Duse was an Italian actress, known professionally simply as “Duse”. There is a theory that our term “doozy” derived from Eleanora’s family name. I guess she was a “doozy”.

24. Wild Alpine goat : IBEX
Ibex is a common name for various species of mountain goat. “Ibex” is a Latin name that was used for wild goats found in the Alps and Apennines in Europe.

31. ___ pole : TOTEM
Totem poles are large sculptures that have been carved from trees. Totem poles are part of the culture of Native Americans in the Pacific Northwest of North America.

35. Marvin of Motown : GAYE
Marvin Gaye was a singer-songwriter from Washington, D.C. who came to be known as “Prince of Soul” and “Prince of Motown”. Some of Gaye’s biggest hits are “I Heard It Through the Grapevine” (1968), “What’s Going On?” (1971), “Let’s Get It On” (1973) and “Sexual Healing” (1982). Famously, Gaye was shot dead by his father while Marvin was sitting on his mother’s bed just talking to her. Marvin had given the gun to his father as a Christmas gift.

42. Gandhi, for one : HINDU
Mohandas Gandhi was a political and spiritual leader in India in the first part of the 20th century, as the country sought independence from Britain. He was also referred to as “Mahatma”, meaning “great soul”. His remarkable philosophy of nonviolence and living a modest lifestyle was a great inspiration to the Indian people. India (and Pakistan) was granted independence in 1947. Sadly, Gandhi was assassinated the very next year, by a Hindu nationalist.

46. School functions with chaperones : DANCES
Traditionally, a “chaperon” was a woman accompanying a younger unmarried lady in public”, with the term originating in France. The French word was used to mean “hood, cowl” going back to the 12th century, a diminutive of “chape” meaning “cape”. So, out word “chaperon” has the same roots as our word “cape” and indeed “cap”. The idea is that a chaperon is “covering” someone who is vulnerable socially.

50. Norse god of war : THOR
In Norse mythology, Odin was the chief of the gods. Odin’s wife Frigg was the queen of Asgard whose name gave us our English term “Friday” (via Anglo-Saxon). Odin’s son was Thor, and his name gave us the term “Thursday”. Odin himself gave us our word “Wednesday”, from “Wodin”, the English form of his name.

53. “Look out!,” to a golfer : FORE!
No one seems to know for sure where the golfing term “fore!” comes from. It has been used at least as far back as 1881, and since then has been called out to warn other golfers that a wayward ball might be heading their way. My favorite possibility for its origin is that it is a contraction of the Gaelic warning cry “Faugh a Ballagh!” (clear the way!) which is still called out in the sport of road bowling. Road bowling is an Irish game where players bowl balls along roads between villages, trying to reach the end of the course in as few bowls as possible, just like in golf!

54. Chinese money : YUAN
The Korean Won, the Chinese Yuan, and the Japanese Yen (all of which are Asian currencies) take their names from the Chinese written character that represents “round shape”.

58. Schubert’s Symphony ___ Minor (“Unfinished Symphony”) : IN B
Franz Schubert (1797-1828) was an Austrian composer, particularly noted for his large portfolio of lieder (songs). Schubert is also famous for his “Unfinished Symphony”. Schubert’s Symphony No. 7 was was left as a draft after he passed away, and as such was “unfinished”. However, it was more complete than his Symphony No. 8 which is the one we know as “The Unfinished”.