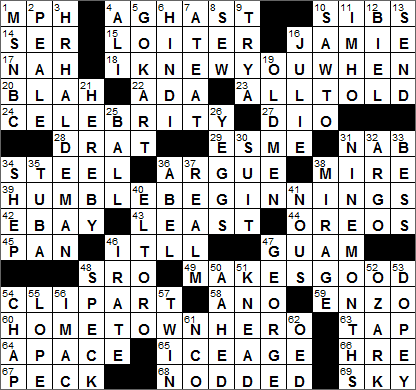 16. Actor/stand-up comic Foxx JAMIE
Jamie Foxx is the professional name used by Eric Marlon Bishop, an actor from Terrell, Texas. Foxx is a very versatile entertainer. He is an Oscar-winning actor (for playing the title role in “Ray”), and a Grammy Award winning musician. He is also a stand-up comedian and a talk-radio host.

29. Salinger girl ESME
J. D. Salinger wrote a short story called “For Esme – with Love and Squalor”, originally published in “The New Yorker” in 1950. It is a story about a young English girl called Esme and an American soldier, and is set in WWII.

34. Longtime Pittsburgh product STEEL
Pittsburgh was the world capital of steel production for many years, largely due to the surrounding geography. The area around the city had large deposits of iron, as well as ample forests that provided the charcoal used in smelting. As the supply of wood diminished, local supplies of coal fueled the blast furnaces. Entrepreneurs took full advantage of the local conditions. Henry Bessemer developed the Bessemer process that produced steel, and soon the area’s iron industry converted to steel production. And the demand for steel was high, as the nation started to build a huge railroad network.

44. Cookies that can be twisted apart OREOS
How the Oreo cookie came to get its name seems to have been lost in the mists of time. One theory is that it comes from the French “or” meaning “gold”, a reference to the gold color of the original packing. Another suggestion is that the name is the Greek word “oreo” meaning “beautiful, nice, well-done”.

45. Zero-star review PAN
To pan something is to criticize it harshly.

47. Pacific island “where America’s day begins” GUAM
Guam is a US territory in the western Pacific Ocean, the largest of the Mariana Islands. Guam is also the first territory in the United States to see the sun rise on any particular day. As such, the territory has adopted the motto, “Where America’s day begins”. During WWII, the US territory of Guam was occupied by the Japanese for 31 months until it was liberated in the Battle of Guam in July 1944. Of the 18,000 Japanese men holding the island, only 485 surrendered, so almost all perished in the invasion. One Japanese sergeant hid out on the island for an incredible 28 years, finally surrendering in 1972!

48. Sign of a sellout SRO
Standing room only (SRO)

59. Automaker Ferrari ENZO
Enzo Ferrari was an Italian race car driver, and founder of the Ferrari car manufacturing company. Ferrari died in 1988, and in 2003 the company named the Enzo Ferrari model after its founder.

66. Charlemagne’s domain: Abbr. HRE
The Holy Roman Empire (HRE) existed from 962 to 1806 AD and was a territory of varying size over the centuries that centered on the Kingdom of Germany. The HRE was a successor to the western half of the Ancient Roman Empire.

Pepin the Short (aka Pepin the Younger, Pepin III) was Duke of the Franks from 751 to 768. Pepin expanded the Frankish Empire and then law dictated that he had to leave the Empire divided between his two sons, Carloman I and Charlemagne. Carloman I was given lands that were centered around Paris, and Charlemagne was given lands that completely surrounded his brothers territory. So it fell to Charlemagne to defend and extend the borders of the empire. It is because of this division of power that it’s Charlemagne who we read about today, not Carloman I. It was Emperor Charlemagne who in effect founded the Holy Roman Empire.

67. 1/4 bushel PECK
A peck is a unit of dry volume, equivalent to two gallons. Four pecks then make up a bushel.

Down
1. Rachel Maddow’s channel MSNBC
You used to be able to listen to “The Rachel Maddow Show” on Air America Radio before the radio station went bust. Now you can see Maddow on a TV show with the same name, every night on MSNBC. She is the first openly gay anchor to host a prime-time news program in the US.

4. Foreman opponent ALI
George Foreman is a former World Heavyweight Champion boxer and Olympic gold medalist. Famously, Foreman lost his title to Muhammad Ali in the 1974 title fight that was billed as “the Rumble in the Jungle”. Foreman is also known for promoting the George Foreman Grill, and for naming all five of his sons “George”.

6. Delhi language HINDI
The Union Government of the Republic of India has two official languages: Hindi and English.

9. “___ Little Tenderness” (1960s hit) TRY A
The love song “Try a Little Tenderness” was first released in 1932 by the Ray Noble Orchestra, and has since been covered countless times. The most famous version is probably by Otis Redding from 1966. My personal favorite performance is in the Irish movie “The Commitments”. That movie is a must-see for anyone interested in contemporary Irish culture, in my humble opinion that is …

11. Start of a web address? IMHO
In my humble opinion (IMHO)

16. Andrews of “Mary Poppins” JULIE
The actress and singer Julie Andrews was made a Dame in 2000 by Queen Elizabeth II. The most famous roles played by Andrews were probably the leads in “Mary Poppins” (1964) and “The Sound of Music” (1965). More recently she has had a recurring role in “The Princess Diaries” (2001) and the film’s 2004 sequel.

The “Mary Poppins” series of children’s novels was written by Australian-born English writer and actress P. L. Travers. Mary Poppins is a magical children’s nanny with a best friend called Bert. In the famous musical film adaptation of the Mary Poppins stories, Poppins is played by Julie Andrews and Bert is played Dick Van Dyke.

25. Event attended by Cinderella BALL
The folk tale about “Cinderella” was first published by French author Charles Perrault in 1697. The storyline of the tale may date back as far as the days of Ancient Greece. A common alternative title to the story is “The Little Glass Slipper”.

26. Safecrackers YEGGS
“Yegg” is a slang word for a burglar and often for a safe-cracker. The origin of the term appears to be unknown.

32. 2012 Best Picture with Ben Affleck ARGO
“Argo” is a 2012 movie that is based on the true story of the rescue of six diplomats hiding out during the 1979 Iran hostage crisis. The film was directed by and stars Ben Affleck and is produced by Grant Heslov and George Clooney, the same pair who produced the excellent “Good Night, and Good Luck”. I saw “Argo” recently and recommend it highly, although I found the scenes of religious fervor pretty frightening …

33. Mrs. Truman BESS
Harry and Bess Truman met when they were very young children, at Sunday school. They were friends right through high school and became engaged in 1918 just before Harry went off to France during WWI, marrying the next year. Bess Truman never really took to the Washington scene when she became First Lady and stayed out of the limelight as much as she could. Perhaps that contributed to her longevity. Mrs. Truman lived to the age of 97, making her the longest living First Lady in US history.

35. Big instrument in a marching band TUBA
The tuba is the lowest pitched of all the brass instruments, and one of the most recent additions to the modern symphony orchestra (usually there is just one tuba included in an orchestral line-up). “Tuba” is the Latin word for “trumpet, horn”. Oom-pah-pah …

36. Brother of Cain ABEL
According to the Bible, Adam and Eve had several children, although only the first three are mentioned by name: Cain, Abel and Seth.

38. Vision of a distant oasis, maybe MIRAGE
A mirage occurs when light rays are bent by passing say from cold air to warmer air. The most often cited mirage is a “lake” seen in a desert, which is actually the blue of the sky and not water at all. The word “mirage” comes to us via French from the Latin “mirare” meaning “to look at in wonder”. “Mirage” has the same root as our words “admire” and “mirror”.

40. Six Flags coaster whose name is Spanish for “The Bull” EL TORO
The Six Flags Entertainment Corporation is an operator of amusement parks that is headquartered in Grand Prairie, Texas. Six Flags owns more amusement parks than any other company in the world. The first of these properties to open was Six Flags Over Texas. The park’s name was chosen as a homage to the flags of the six nations that have governed Texas, namely Spain, France, Mexico, the Republic of Texas, the United States of America, and the Confederate States of America.

47. First name of three U.S. presidents GEORGE
There have been three US presidents named George:

52. Arkansas’s ___ Mountains OZARK
The Ozark Mountains aren’t really mountains geographically speaking, and the Ozarks are better described by the alternate name, the Ozark Plateau. It’s not really certain how the Ozarks got their name, but my favorite theory is that “Ozarks” is the phonetic spelling of “aux Arks”, short for “of Arkansas” in French.

54. Fellow CHAP
“Chap” is an informal term for “lad, fellow”, especially in England. The term derives from “chapman”, an obsolete word meaning “purchaser” or “trader”.

56. Computer whose second letter is capitalized IMAC
The iMac is a desktop computer platform from Apple introduced in 1998. One of the main features of the iMac is an “all-in-one” design, with the computer console and monitor integrated. The iMac also came in a range of colors, that Apple marketed as “flavors”, such strawberry, blueberry and lime.

57. Romulus or Remus TWIN
According to tradition, Rome was founded by the twin brothers Romulus and Remus. The pair had a heated argument about who should be allowed to name the city and Romulus hit Remus with a shovel, killing him. And so, “Rome” was born!

61. Sgt., for one NCO
An NCO is a non-commissioned officer in the armed forces. Usually such an officer is one who has earned his or her rank by promotion through the enlisted ranks. A good example would be a sergeant (sgt.).

62. Word ref. started in 1857 OED
Work started on what was to become the first “Oxford English Dictionary” (OED) in 1857. Several interim versions of the dictionary were published in the coming years with the first full version appearing, in ten bound volumes, in 1928. The second edition of the OED appeared in 1989 and is made up of twenty volumes. The OED was first published in electronic form in 1988 and went online in 2000. Given the modern use of computers, the publishing house responsible feels that there will never be a third print version of the famous dictionary.