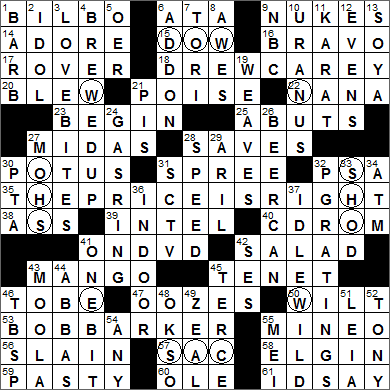 Today’s Wiki-est, Amazonian Googlies
Across
1. Friend of Gandalf BILBO
Bilbo Baggins is the main character in J. R. R. Tolkien’s fantasy novel “The Hobbit”, and a supporting character his “The Lord of the Rings” trilogy.

15. ___ Chemical (Fortune 500 company) DOW
Dow Chemical Company was founded back in 1897 by a chemist called Herbert Henry Dow, and initially manufactured and sold bleach and potassium bromide. Dow is now the second-largest chemical manufacturer in the world according to revenue, second only to the German company BASF.

17. Mars explorer ROVER
NASA’s Curiosity rover is the fourth in a series of unmanned surface rovers that NASA has sent to Mars. Previous rovers are the Sojourner rover (1997), Spirit rover (2004-2010) and Opportunity rover (2004-present). Curiosity rover was launched in November of 2011, and landed on Mars in August 2012 after having travelled 350 million miles. After that long journey, Curiosity landed just 1½ miles from its targeted touchdown spot.

18. Modern host of 35-Across DREW CAREY
Drew Carey always strikes me as a stand-up guy who does stand-up comedy. Before turning to comedy, Carey served six years with the US Marine Corps.

21. Aplomb POISE
“Aplomb” is such a lovely word, meaning confidence and assurance. It is a French word that literally means “perpendicularity”, or “on the plumb line”. The idea is that someone with aplomb is poised, upright, balanced.

22. “Peter Pan” dog NANA
In J.M. Barrie’s play and novel about Peter Pan, Peter takes takes the Wendy Darling and her two brothers on adventures on the island of Neverland. Back in the real world, the Darling children are taken care of by a nanny, a Newfoundland dog called Nana. It is Nana who takes Peter Pan’s shadow away from him as he tries to escape from the Darling house one night.

23. Proctor’s command BEGIN
A “proctor” is a supervisor, especially of an examination in a school, or perhaps of a dormitory. The word “proctor” originated in the late 1500s, a contraction of the word “procurator”, the name given to an official agent of a church.

We usually use the term “Air Force One” for the purpose-built military aircraft that transports the president, although any plane can use the call sign, provided the president is aboard. There was an incident in 1953 which a flight carrying President Eisenhower (flight no. Air Force 8610) flew close to commercial airliner (flight no. Eastern 8610). In order to avoid confusion of flight numbers in the future, the special callsign “Air Force One” was created.

35. Long-running game show with a feature spelled out clockwise by this puzzle’s circled letters THE PRICE IS RIGHT
“The Price is Right” is a television game show that first aired way back in 1956!

38. Dummkopf ASS
“Dummkopf” is a German word that translates literally as “dumb head”.

39. Its chips aren’t for eating INTEL
Intel is the world’s largest manufacturer of semiconductor chips. The company was founded in 1968, and the name “Intel” is a derived from the term “int(egrated) el(ectronics)”. Recognition of the Intel brand has been greatly helped by the success of the “Intel Inside” campaign that started back in 1991.

40. Device read with a laser CD-ROM
CD-ROM stands for “compact disc read only memory”. The name indicates that you can read information from the disc (like a standard music CD for example), but you cannot write to it. You can also buy a CD-RW, which stands for “compact disc – rewritable”, with which you can read data and also write over it multiple times using a suitable CD drive.

41. How some home videos are stored ON DVD
The abbreviation “DVD” doesn’t actually stand for anything these days, although it originally was short for Digital Video Disk. The use of the word “video” was dropped as DVDs are no longer limited to storing video content.

43. ___ Madness (Snapple flavor) MANGO
Originally “Snapple” was name of just one type of juice made by a company called Unadulterated Food Products. The drink’s name was a contraction of “snappy apple”. The company’s name was changed to the Snapple Beverage Corporation in the early 1980s. Snapple was sold in 1994, and is now a brand name owned by Dr Pepper Snapple Group.

53. Longtime host of 35-Across BOB BARKER
Bob Barker is a retired TV host of game shows, most famous for hosting “The Price Is Right” for 35 years from 1972 to 2007. He retired when he was 83½ years old, having secured the record as the oldest man ever to host a regularly scheduled TV game show. Barker is a celebrated animal rights activist, after becoming a vegetarian in 1979.

55. Sal of “Exodus” MINEO
The actor Sal Mineo’s most famous role was John “Plato” Crawford, the kid who was in awe of the James Dean character in “Rebel Without a Cause”. Sadly, Mineo was murdered in 1976 when he was just 37 years old. He was attacked in the alley behind his Los Angeles apartment and stabbed through the heart. When an arrest was made it was discovered that the murderer had no idea that his victim was a celebrity, and that his plan was just to rob anyone who came along.

“Exodus” is a wonderful novel written by American writer Leon Uris, first published in 1947. The hero of the piece is Ari Ben Canaan, played by Paul Newman in the 1960 film adaptation directed by Otto Preminger.

56. “O, I am ___!” (Polonius’s last words) SLAIN
In Shakespeare’s “Hamlet”, Polonius is an important character eventually killed by Hamlet, albeit in a case of mistaken identity. Polonius has two memorable lines in the play that are oft-quoted today. “To thine own self be true”, and “Neither a borrower nor a lender be”.

58. ___ Marbles (British Museum display) ELGIN
A frieze is an architectural feature found in many Roman and Greek buildings. Inside a room, frieze is the name given to the upper part of the wall, between the picture rail and the crown molding. Outside of a room, the term frieze is the name given to any extended decoration that is positioned above eye level. Perhaps the most famous frieze comes from the Parthenon in Athens. Over a third of this highly decorated feature was removed from Athens and taken to London in the early 1800s by the Earl of Elgin, where they remain on display in the British Museum. These famous “Elgin Marbles” are subject of much controversy as the legality of the removal is in dispute.

60. Flamenco shout OLE!
Flamenco is a style of Spanish music and dance. The origin of the word “flamenco” isn’t clearly understood, but the explanation that seems most credible to me is that it comes from Flanders in Northern Europe. Given that “flamenco” is the Spanish word for “Flemish” and Flanders is home to the Flemish people it makes perfect sense, doesn’t it?

Down
2. Winner of a popular TV talent show IDOL
“American Idol” is a spin-off show that was created after the amazing success of the British television show “Pop Idol”. I can’t abide either program(me) …

9. Jimmy Fallon’s home NBC
Jimmy Fallon was a cast member for a number of years on “Saturday Night Live” before getting his own talk show in 2009, “Late Night with Jimmy Fallon”. Fallon is in the news right now as he is about to take over “The Tonight Show” from Jay Leno.

10. Planet with 27 moons URANUS
All of the twenty-seven moons of the planet Uranus are named for characters from literature, characters created by William Shakespeare and Alexander Pope. The five major moons are so large that they would be considered planets in their own right if they were orbiting the sun directly. The names of these five moons are:

11. One of 14 in a gold chain KARAT
A karat (also “carat”, the spelling outside of North America) is a measure of the purity of gold alloys, with 24-karat representing pure gold.

12. 18 of 38 roulette numbers EVENS
The name “roulette” means “little wheel” in French, and the game as we know it today did in fact originate in Paris, in 1796. A roulette wheel bears the numbers 1-36. A French entrepreneur called François Blanc introduced the number “0” on the wheel, to give the house an extra advantage. Legend has it that Blanc made a deal with the devil in order to unearth the secrets of roulette. The legend is supported by the fact that the numbers 1 through 36 add up to a total of “666”, which is the “Number of the Beast”. Spooky …

13. ___ bean SOYA
What are known as soybeans here in the US are called “soya beans” in most other English-speaking countries. So, I drink soy milk here in America, but when I am over in Ireland I drink “soya milk”.

26. Fraternity party detritus BEER CAN
“Detritus” is the loose material that results from the process of erosion. The usage of the term has evolved to man any accumulated material or debris. “Detritus” is Latin for “a wearing away”.

27. Mineralogist for whom a scale is named MOHS
The Mohs scale of mineral hardness was developed in 1812 by Friedrich Mohs. Basically Mohs took minerals and scratched them with other minerals. In this way he was able to determine which minerals were hardest (most scratch resistant) and which softest.

29. Seed coat ARIL
The casing surrounding many seeds is called the aril, and it may be quite fleshy. This fruit-like characteristic makes it desirable as a food and aids in the dispersion of the seeds.

37. Original name for J.F.K. Airport IDLEWILD
The Idlewild Golf Course was taken over by the city of New York in 1943 and construction started on a new airport to serve the metropolis and relieve congestion at La Guardia. The Idlewild name still persists, even though the airport was named after Major General Alexander E. Anderson from the first days of the project. When the facility started operating in 1948 it was known as New York International Airport, Anderson Field. It was renamed to John F. Kennedy International Airport (JFK) in 1963, one month after the President was assassinated.

42. Parisian possessive SES
“Ses” is the French word for “his”, “her” or “its”, when referring to a group of items.

44. Palestinian leader Mahmoud ___ ABBAS
Mahmoud Abbas took over as Chairman of the Palestine Liberation Organization in 2004 after the death of Yasser Arafat. Abbas is also the President of the Palestinian National Authority, equivalent to “head of state”.

45. Canonical hour before sext TERCE
In the Roman Catholic tradition, there is an official set of daily prayers known as the Liturgy of the Hours. The traditional list of prayers is:

51. Luke Skywalker’s twin LEIA
Princess Leia is Luke Skywalker’s twin sister in the original “Star Wars” trilogy and was played by Carrie Fisher. Carrie Fisher has stated that she hated the famous “cinnamon bun hairstyle” that she had to wear in the films, as she felt it made her face look too round. She also had to to sit for two hours every day just to get her hair styled. Two hours to get your hair done? It takes me just two seconds …

52. Broadway honor TONY
The full name for the Tony Award is the Antoinette Perry Award for Excellence in Theatre. Antoinette Perry was an American actress and co-founder of the American Theatre Wing, one of the organizations that selects the award recipients.