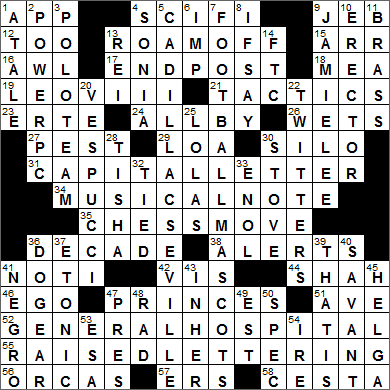 Today’s Wiki-est, Amazonian Googlies
Across
1. ___ Store (debut of 2008) : APP
App Store is the platform that Apple introduced in 2008 to distribute mobile apps for the iPhone and other devices that use the iOS operating system. When a customer purchases an app from the App Store, the publisher of the app gets 70% of the purchase price, with the balance going to Apple.

9. Bush found in Florida : JEB
I always thought that Jeb was an American nickname for James or Joseph but I must be wrong, because George and Barbara’s son John Ellis Bush is called “Jeb”. A kind blog reader has suggested the the name “Jeb” may have been chosen as JEB are the initials of John Ellis Bush.

18. Apology opener : MEA
Many Roman Catholics are very familiar with the Latin phrase “mea culpa” meaning “my fault”, as it is used in the Latin Mass. The additional term “mea maxima culpa” translates as “my most grievous fault”.

19. 10th-century pope : LEO VIII
Pope Leo VIII was elected as an antipope in the year 963, replacing Pope John XII who was deposed by Holy Roman Emperor Otto I. When Otto left Rome in 964, John XII was reinstated, and the returning pope excommunicated Leo. A few months later, John died, and Pope Benedict V was elected as the new leader of the church. As a result, Otto I laid siege on Rome and eventually installed Leo VIII as pope, this time uncontested. Otto I left Rome, and Leo VIII remained in office until he passed away in 965.

23. “The Alphabet” artist : ERTE
“Alphabet Suite” is a series of paintings by Erté that each feature one letter of the alphabet. Erté started on the series in 1927 and only completed the last painting in 1967. At least that’s what the artist thought. When he went to gather the series together for an exhibition he discovered that he had omitted the letter L. So, Erté hurriedly completed the missing work, just in time for the show.

Erté was the pseudonym of French artist (Russian born) Romain de Tirtoff. Erté is the French pronunciation of his initials “R.T.”

30. It may have a high grain content : SILO
Silo is a Spanish word that we absorbed into English, originally coming from the Greek word “siros” that described a pit in which one kept corn.

36. Score at the half? : DECADE
A score is twenty, and a decade is ten, so I guess a decade is half the score …

42. Caesar’s force : VIS
“Vis” is Latin for “force, power”, as in “vis medicatrix naturae” meaning “the healing power of nature”.

44. Notable 1979 exile : SHAH
The last Shah of Iran was Mohammed-Reza Shah Pahlavi, as he was overthrown in the revolution led by the Ayatollah Khomeini in 1979. The post-revolution government sought the extradition of the Shah back to Iran while he was in the United States seeking medical care (he had cancer). His prolonged stay in the United States, recovering from surgery, caused some unrest back in Iran and resentment towards the United States. Some say that this resentment precipitated the storming of the US Embassy in Tehran and the resulting hostage crisis.

51. States on a game board, e.g.: Abbr. : AVE
The street names in the US version of Monopoly are locations in or around Atlantic City, New Jersey. Many of those street names are come from the names of US states e.g. Illinois Avenue and New York Avenue.

52. Soap of a medical nature : GENERAL HOSPITAL
The daytime soap opera “General Hospital” is the longest running such drama still in production in the US, and is second-longest running soap in the world (the UK’s famous “Coronation Street” heads the list).

56. They might catch some rays : ORCAS
The taxonomic name for the killer whale is Orcinus orca. The use of the name “orca”, rather than “killer whale”, is becoming more and more common. The Latin word “Orcinus” means “belonging to Orcus”, with Orcus being the name for the Kingdom of the Dead.

58. Spanish for “basket” : CESTA
A cesta (also “xistera”) is a wicker scoop strapped to the wrist that is used for catching and throwing the ball in jai alai. Jai alai is a game that derives from Basque pelota, and is known as “cesta-punta” in the Basque language. “Cesta” is Spanish for “basket”.

Down
1. “Ben-Hur: ___ of the Christ” : A TALE
The celebrated Charlton Heston movie “Ben-Hur” is a dramatization of a book published in 1880 by Lew Wallace titled “Ben-Hur: A Tale of Christ”. The 1959 epic film won a record 11 Academy Awards, a feat that has been equaled since then but has never been beaten. The other winners of 11 Oscars are “Titanic” and “The Lord of the Rings: The Return of the Rings”.

2. Basis of the Nintendo Wii’s processor : POWERPC
PowerPC was a project to develop high performance microprocessors, a joint venture that started in 1991 with an alliance between Apple, IBM and Motorola (the AIM alliance). PowerPC is an acronym for Performance Optimization With Enhanced RISC – Performance Computing. The bottom line is that it was part of the effort to thwart the dominance of Microsoft and Intel in the personal computer market. These days, PowerPC chips are mainly used by makers of gaming machines such as the Wii, PlayStation and Xbox 360.

3. It has four mounted players : POLO TEAM
The sport of polo originated in Iran, possibly before the 5th century BC. Polo was used back them primarily as a training exercise for cavalry units.

4. Gandhi who heads the Indian National Congress : SONIA
Sonia Gandhi is a politician, the President of the Indian National Congress party. Sonia is the widow of former Prime Minister Rajiv Gandhi, who was assassinated in 1991. Interestingly, Sonia Gandhi was born and raised in Italy. She met her future husband while they were both studying in Cambridge, England in the sixties.

5. Longtime luxury sedan : CADILLAC SEVILLE
The Cadillac Seville is a mid-size luxury car that GM made from 1975 to 2004.

9. Curtis of the screen : JAMIE LEE
The actress Jamie Lee Curtis got her big break when she played the lead in the original “Halloween” horror movie. She is the daughter actors Tony Curtis and Janet Leigh. Curtis married fellow actor and director Christopher Guest in 1984. Guest holds the hereditary title of 5th Baron Haden-Guest in the British peerage. That makes Curtis Lady Haden-Guest.

10. Player with Legos, for example : ERECTOR
Lego is manufactured by Lego Group, a privately held company headquartered in Billund, Denmark. The company was founded by a carpenter called Ole Kirk Christiansen in 1934 and the now-famous plastic interlocking blocks were introduced in 1949. The blocks were originally sold under the name “Automatic Binding Bricks” but I think “Lego” is easier to remember! The name “Lego” comes from the Danish term “leg godt” meaning “play well”.

13. Big outdoor gear retailer : REI
“REI” is the sporting goods store called Recreational Equipment Inc. REI was founded in Seattle by Lloyd and Mary Anderson in 1938 as a cooperative that supplies quality climbing gear to outdoor enthusiasts. The first full-time employee hired by the Andersons was Jim Whittaker, who was the American to climb Mount Everest.

14. What might break people’s trust?: Abbr. : FTC
The Federal Trade Commission (FTC) was established in 1914 with the mission of protecting consumers. The FTC runs the National Do Not Call Registry which can limit the amount of telemarketing calls that consumers receive. To register your number, simply go to the website www.donotcall.gov.

20. Discoverer of the Amazon’s mouth : VESPUCCI
Amerigo Vespucci was an Italian explorer. Vespucci was the man who established that the landmass discovered by Christopher Columbus was not the eastern coast of Asia, but rather was a “New World”. The newly-discovered supercontinent was named “America”, coming from the Latin version of Vespucci’s first name “Amerigo”.

25. “Copacabana” showgirl and others : LOLAS
The Copacabana of song is the Copacabana nightclub in New York City (which is also the subject of the Frank Sinatra song “Meet Me at the Copa”). The Copa opened in 1940 and is still going today although it is struggling. The club had to move due to impending construction and is now “sharing” a location with the Columbus 72 nightclub. “Her name was Lola, she was a showgirl …”

28. ___ b’Av (annual Jewish fast day) : TISHA
Tisha B’Av is the ninth (tisha) day of Av (the month in the Hebrew Calendar). Tisha B’Av is a day of fasting, and it commemorates the destruction of the two ancient Temples in Jerusalem. Because both temples were destroyed on the same day, about 650 years apart, Tisha B’Av is known as “the saddest day in Jewish history”.

33. Hydroxyl-bearing compound : ENOL
An enol is an alkene with a hydroxyl group, sort of part-alkene and part-alcohol. The term “enol” therefore, is a portmanteau of “alkene” and “alcohol”.

36. Turned-over part of a leaf : DOG-EAR
The folded-down corner of the page of a book, a temporary placeholder, is known as a “dog-ear”.

37. Alternative to Avia : ETONIC
Etonic is a manufacturer of sporting shoes that is particularly known for its golf shoes. The company was founded in 1876 in Brockton, Massachusetts and was named for its founder, Charles A. Eaton.

40. Wise one : SAVANT
A “savant” is a learned person. The term “savant” can also be short for “idiot savant”, the outdated name for someone with a mental disability but who has above-normal capabilities in perhaps calculation or musical expression.

41. Opposite of blanco : NEGRO
In Spanish, black (negro) and white (blanco) are colors.

43. “___ Shoes” (2005 Cameron Diaz film) : IN HER
“In Her Shoes” is a 2005 comedy-drama film starring Cameron Diaz, Toni Collette and Shirley MacLaine. MacLaine plays the grandmother of two very different sisters played by Diaz and Collette. The movie is based on a novel of the same name by Jennifer Weiner.

45. Frequent Wyeth model : HELGA
Andrew Wyeth was known as a realist painter and “the painter of the people” in recognition of his popularity with the man in the street. His neighbor, Helga Testorf, posed for a total of 247 paintings over a 14 year period, a series known as “The Helga Pictures”. The remarkable thing is that neither Wyeth’s wife nor Testorf’s husband knew anything about the portrait sessions or the paintings.

53. Spanish demonstrative : ESA
“Esa” is Spanish for “that”.