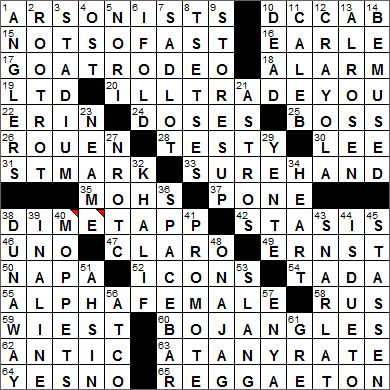 Today’s Wiki-est, Amazonian Googlies
Across
10. 1983 action comedy with the tagline “When these guys hit the streets, guess what hits the fan” DC CAB
“D.C. Cab” is a comedy movie released in 1983 starring Mr. T. I don’t hear many good things about the film, although there is a special appearance by Irene Cara of “Fame” fame …

16. Band-Aid inventor Dickson EARLE
“Band-Aid” is a brand name owned by Johnson & Johnson, although like many popular brands “band-aid” has become the generic term for an adhesive bandage, at least here in North America. The generic term we use in the British Isles for the same product is “plaster” …

17. Situation that’s gone absurdly out of control GOAT RODEO
The phrases “goat rodeo” and “goat rope” are used to describe chaotic situations, especially in a business or in government. New to me …

19. Relative of Cie. LTD
In Britain and Ireland the most common type of business (my perception anyway) is one that has private shareholders whose liability is limited to the value of their investment. Such a company is known as a private limited company, and has the letters “Ltd” after the name. If the shares are publicly traded, then the company is a public limited company, and has the letters “plc” after the name.

26. City on the Seine ROUEN
Rouen is the major city in Normandy in northern France. During the days of Norman Britain, Rouen was one of the capitals of the Anglo-Norman dynasties. Rouen was also where Joan of Arc was burned at the stake in 1431.

30. Victor at Gaines’s Mill and Cold Harbor LEE
The Battle of Cold Harbor was one of the bloodiest in the Civil War, fought in 1864 in Central Virginia. The battle actually took on the same site as the Battle of Gaines’s Mill, fought just two years earlier. When the Union soldiers were digging trenches in preparation for the battle in 1864, they found it unsettling to be digging up some skeletal remains from the 1862 action.

31. One whose word is gospel? ST MARK
“Gospel” is a term that came to us via Old English. The Old English term is “godspel” meaning “good story”, and referred to the glad tidings announced by Jesus. There are four Gospels in the Christian New Testament, the Gospels of Matthew, Mark, Luke and John.

35. ___ scale MOHS
The Mohs scale of mineral hardness was developed in 1812 by Friedrich Mohs. Basically Mohs took minerals and scratched them with other minerals. In this way he was able to determine which minerals were hardest (most scratch resistant) and which softest.

37. Corn bread PONE
Pone is another word for corn bread, from the Powhatan word “apan” meaning “something baked”.

38. Pfizer cold and flu medicine DIMETAPP
Dimetapp is a cold and allergy medication that is sold over-the-counter. It is basically a combined antihistamine and decongestant.

46. Number of African countries with español as an official language UNO
Equatorial Guinea is the only country on the African continent that has Spanish as her official language. The nation, located on the central west coast, was formerly the colony of Spanish Guinea and gained independence from Spain in 1968.

47. Mild cigar CLARO
A claro is mild cigar made with light-colored tobacco. The name “claro” comes from the Spanish for “clear”.

49. Pioneer of Dadaism ERNST
Max Ernst was a painter and sculptor, a pioneer in the Dada movement and Surrealism. Ernst was born near Cologne in Germany in 1891 and he was called up to fight in WWI, as were most young German men at that time. In his autobiography he writes “Max Ernst died the 1st of August, 1914” a statement about his experiences in the war. In reality, Ernst died in 1976 having lived to the ripe old age of 85.

52. Pope Francis and others ICONS
Pope Francis was elected on 13 March 2013 as the 266th Bishop of Rome and leader of the Roman Catholic church. The new pope is famously taking a much simpler and more modest approach to the office, as he did with his life back in Argentina. Francis is the first pope since 1903 not to reside in the papal residence, choosing to live instead in the less lavish Vatican guesthouse.

58. Country with a red, white and blue flag: Abbr. RUS
The Russian flag consists of three horizontal stripes, with white on top, blue in the middle and red on the bottom. Originally an ensign used by Russian merchant ships in the 17th century, the flag was adopted for the Russian Federation after the dissolution of the Soviet Union in 1991.

59. Dianne of “Parenthood,” 1989 WIEST
Dianne Wiest is an actress from Kansas City, Missouri. Wiest has won two Best Supporting Actress Academy Awards, for “Hannah and Her Sisters” in 1987 and for “Bullets over Broadway” in 1995. In both movies, she was directed by Woody Allen.

60. Musical “Mr.” BOJANGLES
“Mr. Bojangles” is a 1968 song written and recorded by country music singer Jerry Jeff Walker. Walker tells us that the song is not a reference to the stage and film star Bill “Bojangles” Robinson.

65. Combined Latin/Jamaican/hip-hop genre REGGAETON
Reggaeton is a genre of music that is rooted in Latin and Caribbean music. It originated in Panama and today is very much associated with Puerto Rico.

Down
1. Casting directors? ANGLERS
We use the verb “to angle” to mean “to fish” because “angel” was an Old English word for a hook.

3. Kind of rock STADIUM
“Arena rock” (also “stadium rock”) is a rock music played in large arenas. It is a phenomenon that dates back to the British Invasion when successful bands like the Beatles played to large audiences in places such as Shea Stadium in New York.

4. Direction from Luxembourg to Nürnberg OST
“Ost” is German for “east”.

Luxembourg is a relatively small country in the middle of Europe, just 100 square miles in area with a population of over half a million. The country is a representative democracy (just like the United Kingdom) and it has a constitutional monarch, namely Henri, Grand Duke of Luxembourg. As such, Luxembourg is the only remaining sovereign Grand Duchy in the world.

Nürnberg (anglicized as Nuremberg) is a Bavarian city located north of Munich. Historically it is remembered for the huge Nazi Nuremberg rallies, and the Nuremberg trials that took place at the end of WWII. Nürnberg is sometimes confused with the city of Nürburg in the west of Germany, famous for the Nürburgring race track.

8. Sub-Saharan tormentors TSETSES
Tsetse flies live on the blood of vertebrate mammals. The name “tsetse” comes from Tswana, a language of southern Africa, and translates simply as “fly”. Tsetse flies are famous for being carriers of the disease known as “sleeping sickness”. Sleeping sickness is caused by a parasite which is passed onto humans when the tsetse fly bites into human skin tissue. If one considers all the diseases transmitted by the insect, then the tsetse fly is responsible for a staggering quarter of a million deaths each year.

One of Caleb Carr’s novels is a latter day Sherlock Holmes mystery called “The Italian Secretary”. The novel was written as a homage to Sir Arthur Conan Doyle (using the Holmes character with the permission of the Doyle estate). I am a big fan of Sherlock Holmes stories so I must put this one on my reading list.

12. Company that makes Silly Putty CRAYOLA
Silly Putty is a silicone polymer that is marketed as a toy. It is a remarkable material that can flow like a liquid and can also bounce. Silly Putty was one of those accidental creations, an outcome of research during WWII in search rubber substitutes. The substitution became urgent as Japan invaded rubber-producing countries all around the Pacific Rim.

13. The Hebrew Hammer of Major League Baseball AL ROSEN
Al Rosen is a former Major League baseball player who played his whole career with the Cleveland Indians. As one of the best all-time players of the game with a Jewish heritage, his fans gave him the nickname “the Hebrew Hammer”.

21. Minute Maid Park team ASTROS
The Houston baseball team changed its name to the Astros from the Colt .45s in 1965 when they started playing in the Astrodome. The Astrodome was so called in recognition of the city’s long association with the US space program.

Enron Field, as it was known, is a retractable-roof ballpark that was built next to Houston’s old Union Station. Enron paid $100 million to get its name on the field, and then when the world found out what a scam Enron actually was, the Astros bought back the contract for the name, for a mere $2.1 million. The stadium became Astros Field for a few months, until the Coke people paid $170 million for a 28-year contract to christen the stadium Minute Maid Park. A good deal for the Astros, I’d say.

23. Ronald who directed “The Poseidon Adventure” NEAME
Ronald Neame was cinematographer and film director from England. Neame’s most famous projects as cinematographer are “One of Our Aircraft is Missing” (1943), “Brief Encounter” (1945), “Great Expectations” (1946) and “Oliver Twist” (1948). Neame also directed some great movies later in his career, such as “”The Prime of Miss Jean Brodie” (1969), “Scrooge” (1970) and “The Poseidon Adventure” (1972).

1974’s “Chinatown” is a Roman Polanski film starring Jack Nicholson and Faye Dunaway. Nicholson also stars in a 1990 sequel to “Chinatown” called “The Two Jakes”. The sequel never made it as big as the original.

45. Onetime Minnesota governor who ran for the G.O.P. presidential nomination nine times STASSEN
Harold Stassen was Governor of Minnesota from 1939 to 1943, and is largely remembered as a perennial candidate for the Republican nomination for US president. Stassen sought the nomination ten times in all, between 1940 and 1992, and never came close to winning.

48. Continuing obsessively ON A JAG
The word “jag” is used to describe periods of unrestrained activity, particularly involving alcohol, and has been in use since the 1800s.

51. Bret Harte/Mark Twain collaboration AH SIN
“Ah Sin” was a disastrously unsuccessful play written by Bret Harte and Mark Twain. The two writers didn’t get on at all well during the writing process, and when the play was produced for the stage it was very poorly received. Nevertheless, Twain suggested a further collaboration with Harte, and Harte downright refused!

56. Record label for Cream and the Bee Gees ATCO
Atco Records is an American record label founded in 1955, taking its name from the parent company Atlantic Corporation.

Cream were a “supergroup” from Britain, meaning the band was comprised of musicians from other successful groups. The band’s members were Eric Clapton (from the Yardbirds), and Jack Bruce and Ginger Baker (both from the Graham Bond Organisation).

The Brothers Gibb (hence, the name “The Bee Gees”) were born in England but grew up and started their musical careers in Australia. They moved back to Manchester in the north of England as youths, and there hit the big time.

57. “And Winter Came …” singer, 2008 ENYA
Enya’s real name is Eithne Patricia Ní Bhraonáin, which can translate from Irish into Enya Brennan. Her Donegal family (in the northwest of Ireland) formed a band called Clannad, which included Enya. In 1980 Enya launched her very successful solo career. She sure does turn up a lot in crosswords!

61. M.A. hopeful’s hurdle GRE
Passing the Graduate Record Examination (GRE) is usually a requirement for entry into graduate school here in the US.