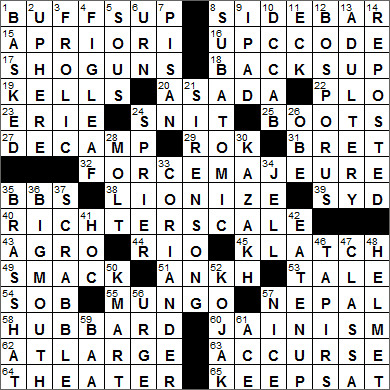 16. A little reading at the supermarket checkout? : UPC CODE
UPC stands for Universal Price Code or Universal Product Code. The first UPC-marked item to get scanned in a store was on June 26, 1974 at 08:01 a.m. at Marsh’s supermarket in Troy, Ohio. It was a 10-pack of Wrigley’s Juicy Fruit chewing gum …

17. Literally, “military commanders” : SHOGUNS
The shoguns of Japan were military dictators who generally inherited their position and power. The term “shogun” can be translated as ‘general”. The position of shogun was effectively eliminated in 1867 with the demise of the Tokugawa shogunate. The modern equivalent of a shogun in Japan is a prime minister.

19. Book of ___ : KELLS
The Book of Kells is a beautifully illuminated manuscript of the four Gospels of the Christian New Testament. It was created in a monastery in Britain or Ireland around 800 CE, and is now housed in the library of Trinity College in Dublin. The book was housed for centuries in the Abbey of Kells in County Meath, Ireland, hence the name.

20. Grilled, on a menu : ASADA
The name of the dish called “Carne Asada” translates from Spanish as “roasted meat”.

22. Grp. involved in much diplomacy : PLO
The Palestine Liberation Organization (PLO) was founded in 1964. The PLO’s early stated goal was the liberation of Palestine, with Palestine defined as the geographic entity that existed under the terms of the British Mandate granted by the League of Nations back in 1923. The PLO was granted observer status (i.e. no voting rights) at the United Nations in 1974.

23. War of 1812 battle site : ERIE
The Battle of Lake Erie was fought during the War of 1812 just off the Ohio coast. The outcome of the action was a defeat for the British and American control of Lake Erie for the remainder of the war.

29. “M*A*S*H” extra : ROK
A South Korean soldier is known as an ROK, named from the initials for the Republic of (South) Korea.

31. Michaels of rock and reality TV : BRET
Bret Michaels is a singer-songwriter who came to fame as the lead vocalist of the glam metal band called Poison. Michaels also won the third season of the reality show “Celebrity Apprentice”.

32. Act of God, e.g., in a contract : FORCE MAJEURE
“Force majeure” is a French phrase meaning “superior force”. We use the term in English to describe circumstances or events that are beyond the control of the parties in a contract. Examples of force majeure are war, strike and “act of God” (e.g. hurricane, flood, earthquake).

38. Really build up : LIONIZE
The verb “to lionize” dates back to the late 1700s when there were lions kept in the Tower of London. The lions were quite famous, and attracted many visitors. Hence, the term “lionize” means to treat someone as a celebrity.

40. Provider of shock value? : RICHTER SCALE
The Richter scale was developed in 1935, by Charles Richter at the California Institute of Technology. Maybe that’s why we still use it out here, while the rest of the world has moved to the “moment magnitude scale”. Reports of earthquake magnitude are usually given using the “moment magnitude scale”, but the media don’t bother to specify which scale is being quoted.

44. Animated film franchise starting in 2011 : RIO
“Rio” is a 2011 animated movie about a male blue macaw who is brought to mate with a female blue macaw in Rio de Janeiro, hence the movie’s title. Fans can go see “Rio 2” that was released in 2014.

45. Gossipy affair : KLATCH
A “klatch” (also “klatsch”) is a casual gathering, particularly for conversation. “Klatch” comes from the German “klatschen” meaning “to gossip”.

51. Figure also called the crux ansata : ANKH
The ankh was the ancient Egyptian hieroglyphic character for “eternal life”. The ankh wasn’t just used in inscriptions but was often fashioned into amulets and as surrounds for mirrors (perhaps symbolizing a view into another world). The ankh is also known as “the key of the Nile” and “crux ansata” (Latin for “cross with a handle”).

55. ___ Jerry, band with the 1970 hit “In the Summertime” : MUNGO
Mungo Jerry is a great rock group from England. The band’s biggest hit is “In the Summertime”, which was released in 1970. The group’s name comes from the T.S. Eliot poem “Mungojerrie and Rumpelteazer” from his collection “Old Possum’s Book of Practical Cats”.

57. “Into Thin Air” setting : NEPAL
Nepal lies to the northeast of India. Today, the state is known as the Federal Democratic Republic of Nepal. In 2008, the Communist Party of Nepal won the country’s general election. Soon after, the Assembly voted to change the form of government, moving away from a monarchy and creating a secular republic.

“Into Thin Air” is a 1997 book by Jon Krakauer in which he gives a firsthand account of the 1996 Mount Everest disaster. That disaster was centered on a rogue storm that enveloped the summit of the mountain and led to the death of eight climbers. The book was adapted into an intense 1997 TV movie of the same name.

58. Mother who had a bone to pick? : HUBBARD
The English nursery rhyme “Old Mother Hubbard” was first printed in 1805:

60. Faith that preaches nonviolence to all living beings : JAINISM
Jainism is a religion based in India in which the faithful practice an ascetic way of life and honor nonviolence.

Down
4. Cover of the Bible? : FIG LEAF
The third plant named in the Bible, after the Tree of Life and the Tree of Knowledge, was the fig tree. Adam and Eve used leaves from the fig tree to sew garments when they realized that they were naked.

7. Fibonacci, e.g. : PISAN
Leonardo of Pisa was a famous and respected Italian mathematician, also known as simply “Fibonacci”. He is remembered for writing about a number sequence (although he didn’t “discover” it) that later was given the name “Fibonacci sequence”. He wrote about the series of numbers in his book called “Liber Abaci”, a celebrated work that introduced Arabic numerals (i.e. 0-9) to the Western world.

10. 1983 Joel Schumacher film : DC CAB
“D.C. Cab” is a comedy movie released in 1983 starring Mr. T. I don’t hear many good things about the film, although there is a special appearance by Irene Cara of “Fame” fame …

Joel Schumacher is a director from New York City who has an impressive list of films on his resume, including “St. Elmo’s Fire”, “The Client”, “A Time to Kill”, “Batman Forever”, “The Phantom of the Opera” and my personal favorite, “Veronica Guerin”.

11. Johann ___, opponent of Martin Luther : ECK
During the Protestant Reformation in the 16th and 17th centuries, as Martin Luther was attacking the policies of the Catholic Church, Johann Eck was one of the leading defenders of Catholicism. The two had public debates, with Luther generally coming out ahead.

14. Like Internet memes : REPOSTED
A “meme” (short for “mineme”) is a cultural practice or idea that is passed on verbally or by repetition from one person to another. The term lends itself very well to the online world where links, emails, files etc. are so easily propagated.

21. Lure : SIREN SONG
In Greek mythology, the Sirens were seductive bird-women who lured men to their deaths with their song. When Odysseus sailed closed to the island home of the Sirens he wanted to hear their voices, but in safety. He had his men plug their ears with beeswax and then ordered them to tie him to the mast and not to free him until they were safe. On hearing their song Odysseus begged to be let loose, but the sailors just tightened his bonds and and the whole crew sailed away unharmed.

26. It’s an honour: Abbr. : OBE
The Most Excellent Order of the British Empire is an order of chivalry in the UK that was established in 1917 by King George V. There are five classes within the order, which are in descending seniority:

30. Like one side of the Aral Sea : KAZAKH
The Aral Sea is a great example of how man can have a devastating effect on his environment. In the early sixties the Aral Sea covered 68,000 square miles of Central Asia. Soviet Union irrigation projects drained the lake to such an extent that today the total area is less than 7,000 square miles, with 90% of the lake now completely dry. Sad …

The Republic of Kazakhstan in Central Asia is the world’s largest landlocked country. Kazakhstan was the last of the former Soviet Republics to declare itself independent from Russia.

33. Cilantro source : CORIANDER
What we know here in North America as cilantro is called coriander in the UK and other parts of the world. “Cilantro” is the Spanish name for the herb.

46. Jungle herbivores : TAPIRS
All four species of tapir are endangered. Even though the tapir looks much like a pig, it is more closely related to the horse and the rhinoceros.

50. The first one opened in Garden City, Mich., in 1962 : KMART
Kmart is the third largest discount store chain in the world, behind Wal-Mart and Target. Kmart is famous for its promotions known as “blue light specials”, a program first introduced in 1965 and discontinued in 1991. I remember being in a Kmart store soon after coming to live in the US. That evening an employee installed a light stand an aisle away from me, switched on a flashing blue light and there was some unintelligible announcement over the loudspeaker system. I had no idea what was going on …

52. Noted Greek officer : KOJAK
“Kojak” is a fun police drama that had an original run on TV from 1973 to 1978. The title character was NYPD Detective Lieutenant Theo Kojak, played by Telly Savalas. Famously, Kojak sucks away on lollipops as he tries to quit cigarettes. Kojak is assisted in his cases by Sergeant “Fatso” Stavros, a character played by George Savalas, Telly’s younger brother.

59. Bellwether’s call : BAA!
A “wether” is a castrated male sheep. A “bellwether” is one such sheep that leads the flock, usually wearing a bell around its neck, hence the name. We use the term “bellwether” more generally to mean any person or thing which assumes leadership or indicates a trend.

61. Top gun : ACE
A flying ace is an aviator who has shot down a number of enemy planes during combat. The qualifying number of kills seems to vary, but five is common. The first use of “ace” was during WWI when the French newspapers dubbed pilot Adolphe Pegoud “l’as” (French for “the ace”) when he shot down his fifth German plane.