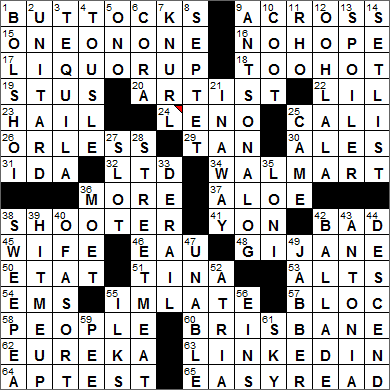 Today’s Wiki-est, Amazonian Googlies
Across
15. Many a pickup game : ONE-ON-ONE
A pick-up game is one that is started spontaneously by a group of players, with those competing usually just dropping by in the hope of participating.

19. Lakers commentator Lantz and others : STUS
Stu Lantz is the color commentator for the LA Lakers on Time Warner Cable SportsNet, and has been so since 1987. Lantz himself played for the NBA from 1968 to 1976.

20. Met someone? : ARTIST
The Metropolitan Opera (the Met) of New York City is the largest classical music organization in the country, presenting about 220 performances each and every year. Founded in 1880, the Met is renowned for using technology to expand its audiences. Performances have been broadcast live on radio since 1931, and on television since 1977. And since 2006 you can go see a live performance from New York in high definition on the big screen, at a movie theater near you …

22. Minute, briefly : LIL’
Lil’ is a short form of the word “little”. There are a whole slew of rappers named Lil’ something, like Lil’ Wayne, Lil’ J, and Lil’ Kim.

24. Deliverer of thousands of monologues : LENO
Jay Leno was born James Leno in New Rochelle, New York. Jay’s father was the son of Italian immigrants, and his mother was from Scotland. Leno grew up in Andover, Massachusetts and actually dropped out of school on the advice of a high school guidance counsellor. However, years later he went to Emerson college and earned a Bachelor’s degree in speech therapy. Leno also started a comedy club at Emerson in 1973. Today Jay Leno is a car nut and owns about 200 vehicles of various types. You can check them out on his website: www.jaylenosgarage.com.

25. City known for its traffic violations : CALI
The economy of the Colombian city of Cali really boomed in the eighties and the early nineties on the back of illegal drug trafficking.

In terms of population, Cali is the third largest city in Colombia (after Bogotá and Medellin). Santiago de Cali (the full name for the city) lies in western Colombia. Apparently, Cali is a destination for “medical tourists”. The city’s surgeons have a reputation for being expert in cosmetic surgery and so folks head there looking for a “cheap” nose job.

30. Fat Tire and Full Sail : ALES
Fat Tire amber ale is the flagship brew of the New Belgium Brewing Company. Apparently the beer’s name comes from the brewery founder’s trip through Europe by bicycle. He used a mountain bike, which was something relatively new on the continent. He was teased asa result with the name “Fat Tire”.

Full Sail is a craft brewery in Hood River, Oregon. The Full Sail company has been employee-owned since 1999.

31. Ballerina Rubinstein who commissioned Ravel’s “Boléro” : IDA
Ida Rubinstein was an actress, dancer and patron of the arts from Russia. Rubinstein inherited her wealth and used it to form her own dance company and to commission artistic works. One of the more famous works that she commissioned was a ballet called “Boléro” from Maurice Ravel, which nowadays is performed almost exclusively as an orchestral piece.

Maurice Ravel was a great French composer of the Romantic Era. His most famous piece of music by far is his “Boléro”, the success of which he found somewhat irksome as he thought it to be a trivial work. Personally though, I love minimalism and simplicity …

32. Business end?: Abbr. : LTD
In Britain and Ireland the most common type of business (my perception anyway) is one that has private shareholders whose liability is limited to the value of their investment. Such a company is known as a private limited company, and has the letters “Ltd” after the name. If the shares are publicly traded, then the company is a public limited company, and has the letters “plc” after the name.

34. Target target? : WALMART
Walmart (previously “Wal-Mart”) takes in more revenue than any other publicly traded company in the world. Over in my homeland, Walmart operates under the name Asda. Walmart’s worldwide headquarters are in Bentonville, Arkansas, the home of Sam Walton’s original Five and Dime. You can actually go into the original store, as it is now the Walmart Visitor Center.

Target Corporation was founded by George Draper Dayton in 1902 in Minneapolis, Minnesota as Dayton Dry Goods Company. Dayton developed into a department store, and the company opened up a discount store chain in 1962, calling it Target. Today Target is the second-largest discount retailer in the country, after Walmart.

48. Action figure released in 1997 : GI JANE
G.I. Joe was the original “action figure”, the first toy to carry that description. G.I. Joe first hit the shelves in 1964. There have been a few movies based on the G.I. Joe figure, but, more famous than all of them I would say is the 1997 movie “G.I. Jane” starring Demi Moore in the title role. I thought that “G.I. Jane” had some potential, to be honest, but it really did not deliver in the end.

51. Fashion designer Knowles, mother of Beyoncé : TINA
Beyoncé Knowles established herself in the entertainment industry as the lead singer with the R&B group Destiny’s Child. She launched her solo singing career in 2003, two years after making her first appearance as an actor. In 2006 she played the lead in the very successful movie adaptation of the Broadway musical “Dreamgirls”. Beyoncé is married to rap star Jay-Z.

Tina Knowles is the ex-wife of Mathew Knowles who managed the group Destiny’s Child. The most famous former member of Destiny’s Child is Beyoncé Knowles, who is Tina and Mathew’s daughter.

57. Progressives, e.g. : BLOC
“Bloc” is the French word for “block”. We use the term in English for a voting alliance.

The Congressional Progressive Caucus (the Progressives) is the most liberal wing of the Democratic Party.

60. Kangaroo Point is a suburb of it : BRISBANE
Brisbane is the capital city of the state of Queensland, Australia. Brisbane is named for the Brisbane River that flows through the city. The river in turn is named for Scotsman Sir Thomas Brisbane who was the Governor of New South Wales in the 1820s. General Douglas MacArthur made Brisbane his headquarters after being forced out of the Philippines during WWII.

62. Illumination indication : EUREKA
Eureka translates from Greek as “I have found it”. The word is usually associated with Archimedes, uttered as he stepped into his bath one day. His discovery was that the volume of water that was displaced was equal to that of the object (presumably his foot) that had been submerged. He used this fact to determine the volume of a crown, something he needed in order to determine if it was made of pure gold or was a forgery.

64. H.S. challenge with 1-to-5 scoring : AP TEST
The Advanced Placement (AP) program offers college level courses to kids that are still in high school. After being tested at the end of the courses, successful students receive credits that count towards a college degree. My bank manager is all for anything that gets college students through in 4 years!

Prokofiev’s ballet “Cinderella” was composed between 1940 and 1944 and was first performed in 1945 at the Bolshoi Theatre in Moscow, not long after the finish of WWII.

2. 1-Down wear : UNITARD
A unitard is like a leotard, except that it has long legs and sometime long sleeves. It wouldn’t be a good look for me …

3. 1958 #1 hit whose only lyric is its title word : TEQUILA
“Tequila” is an instrumental record released by the Champs in 1958. The song made it to number one in the charts, and is still popular today and has been covered many times. Even though it is an instrumental, the word “Tequila!” is shouted out three times in the song.

5. Mackerel variety on Hawaiian menus : ONO
Ono is the name given in Hawaii to the fish better known as the wahoo.

7. Small projecting ridge : KNURL
The manufacturing process of knurling is the cutting of a criss-cross pattern into a material. The process is often used to create a surface that is easier to grip with the fingers or hands.

8. Menorah’s branches, e.g. : SEPTET
There is a seven-branched menorah used symbolically in ancient temples. However, the Hanukkah menorah is a nine-branched lampstand that is lit during the eight-day holiday called Hanukkah. “Menorah” is the Hebrew word for “lamp”.

9. Celery topped with peanut butter and raisins : ANTS ON A LOG
Ants on a log is a snack that dates back to the fifties. It is considered a relatively healthy snack as it is made by spreading peanut butter on celery and placing raisins on top. We can also eat gnats on a log by replacing the raisins with currants. Ants on vacation is made without the raisins, and ants on a Slip ‘n Slide has honey smeared on the peanut butter before adding the raisins.

10. Codger : COOT
Geezer, codger and coot are all not-so-nice terms for an old man.

28. Kebabs sold curbside, say : STREET MEAT
The name “kebab” (also “kabob”) covers a wide variety of meat dishes that originated in Persia. In the West, we usually use “kebab” when talking about shish kebab, which is meat (often lamb) served on a skewer. “Shish” comes from the Turkish word for “skewer”.

35. Anderson of sitcomdom : LONI
Loni Anderson’s most-remembered role was Jennifer Marlowe on the sitcom “WKRP in Cincinnati”. Anderson has been married four times, most famously to actor Burt Reynolds from 1988 to 1993.

36. Big name in bubbly : MOET
Moët & Chandon is a French winery, one of the world’s largest producers of champagne. The company was founded by wine trader Claude Moët in 1743. The name was changed to Moët & Chandon in the 1830s when Pierre-Gabriel Chandon, an in-law to the Moët family, was given co-ownership. Moët & Chandon owns the famous Dom Pérignon brand name, honoring the Benedictine monk who did so much to improve the quality of champagne.

38. Comics boy with the given name Scooner : SWEE’PEA
Originally Popeye used the nickname “Swee’pea” to address his girlfriend Olive Oyl. Then along comes a baby, found on Popeye’s doorstep. Popeye adopts the little guy and raises him, calling him “Swee’Pea”.

43. Title girl in literature’s “Prairie Trilogy” : ANTONIA
American novelist Willa Cather wrote what’s called the “prairie trilogy”, books that tell the story of Swedish immigrants living in Nebraska. The titles in the trilogy are “O, Pioneers!”, “The Song of the Lark” and “My Antonia”. Cather won the Pulitzer Prize for another novel, “One of Ours”, that is set in Nebraska and the French battlefields of WWI.

52. Some lobbies : ATRIA
In modern architecture an atrium (plural “atria” or “atriums”) is a large open space usually in the center of a building and extending upwards to the roof. The original atrium was an open court in the center of an Ancient Roman house. One could access most of the enclosed rooms of the house from the atrium.