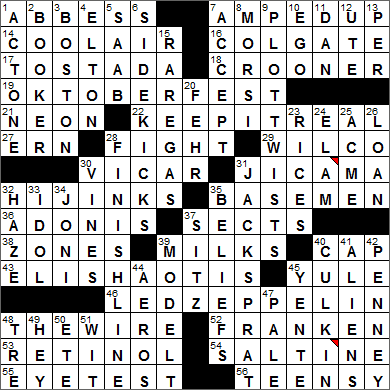 Today’s Wiki-est, Amazonian Googlies
Across
16. Brand behind the mouthwash Plax : COLGATE
The Colgate company, of toothpaste fame, was started by Englishman William Colgate in 1806 as a soap and candle factory in New York City. As the Colgate family prospered, they spent decades providing financial support to Madison University in Hamilton, New York. In recognition of this support, the school was renamed in 1890 to Colgate University.

17. Tex-Mex item : TOSTADA
In Mexican cuisine, a tostada is a flat or bowl-shaped tortilla. “Tostada” translates literally from Spanish as “toasted”.

18. Robert Goulet, e.g. : CROONER
Robert Goulet was a singer and actor who got his big break playing Lancelot in the 1960 stage production of “Camelot”. Goulet was a relative newcomer, and yet headlined with Richard Burton and Julie Andrews.

19. Annual event held in the Theresienwiese : OKTOBERFEST
Oktoberfest is a 16-day beer festival in Munich that actually starts in September. About six million people attend every year, making it the largest fair in the world. The festival tents are erected on a large open space in the city called Theresienwiese. The site is named for Princess Therese of Saxe-Hildburghausen, the wife of Crown Prince Ludwig I. Oktoberfest is actually an annual commemoration of the couple’s marriage, which took place on Theresienwiese in 1810.

21. Certain tube filler : NEON
The basic design of neon lighting was first demonstrated at the Paris Motor Show in 1910. Such lighting is made up of glass tubes containing a vacuum into which has been introduced a small amount of neon gas. When a voltage is applied between two electrodes inside the tube, the neon gas “glows” and gives off the familiar light.

27. Relative of a harrier : ERN
The ern (also erne) is also called the white-tailed eagle, and the sea-eagle.

29. Reply on the radio : WILCO
In the world of radio telephony, “wilco” is short for “I understand and will comply”.

31. Tuber grown south of the border : JICAMA
The plant called the jícama is also known as the Mexican yam and Mexican turnip. Jícama is grown for its tuberous root. The tuber’s interior is usually eaten raw.

43. Influential figure in upward mobility? : ELISHA OTIS
Elevators (simple hoists) have been around for a long time. What Elisha Otis did was come up with the “safety elevator”, a design that he showcased at the 1853 World’s Fair in New York. At the Fair, Otis would stand on an elevated platform in front of onlookers and order his assistant to cut the single rope holding up the platform. His safety system kicked in when the platform had only fallen a few inches, amazing the crowd. After this demonstration, the orders came rolling in.

46. Their best-selling (23x platinum) album had no title : LED ZEPPELIN
Led Zeppelin was an English rock band that got together in 1968. The band’s most famous release has to be the classic “Stairway to Heaven”. Led Zeppelin broke up right after drummer John Bonham was found dead in 1988.

48. Series of drug-related offenses? : THE WIRE
I didn’t watch the HBO series called “The Wire” when it first aired. We ending up buying all five series on DVD and we watched the whole thing a couple of years ago. It’s is a great drama series, and I thoroughly recommend it. Personally, I think that HBO produces some of the best dramas on American television.

52. Politico who wrote “The Truth (With Jokes)” : FRANKEN
Al Franken is the junior US Senator from Minnesota. Franken won the seat in 2009 after an extremely close race, a race that he eventually won by just 312 votes. Prior to serving in the Senate, Franken was a noted satirist and writer for “Saturday Night Live”.

Down
3. Common ground? : BOSTON
Boston Common was built in 1634, making it the oldest city park in the country.

4. John in a studio : ELTON
Elton John’s real name is Reginald Dwight. Sir Elton was knighted in 1998, not for his music but for his charitable work. He founded his own Elton John AIDS Foundation back in 1992.

8. Mohamed ___, Egyptian president removed from power in July 2013 : MORSI
Mohamed Morsi was the first democratically elected leader of the Egypt, taking power in 2012. However, Morsi was removed from office just over a year later in a 2013 coup d’état after he granted himself relatively unlimited powers, leading to a popular revolt.

10. Psych 101 subject : EGO
Sigmund Freud created a structural model of the human psyche, breaking it into three parts: the id, the ego, and the super-ego. The id is that part of the psyche containing the basic instinctual drives. The ego seeks to please the id by causing realistic behavior that benefits the individual. The super-ego almost has a parental role, contradicting the id by introducing critical thinking and morals to behavioral choices.

11. Judo ranking : DAN
Judo is a martial art from Japan that was developed relatively recently, in 1882. The name “judo” translates as “gentle way”. Practitioners of judo proceed through a series of proficiency grades known as the kyu-dan system. At each progression, a different colored belt is awarded.

12. Trojan competitor : UTE
The Runnin’ Utes are the basketball team of the University of Utah. The team was given the nickname the Runnin’ Redskins back when Jack Gardner was the head coach from 1953 to 1971. The “Runnin'” part of the name was chosen because Gardner was famous for playing quick offenses. The “Redskins” name was later dropped in favor of the less controversial “Utes”.

15. 21-Across, e.g. : RARE GAS
The “rare gases” are better known as the noble gases, but neither term is really very accurate. Noble gas might be a better choice though, as they are all relatively nonreactive. But rare they are not. Argon, for example, is a major constituent (1%) of the air that we breathe.

24. Land east of Babylonia : ELAM
The ancient civilization of Elam was located east of Mesopotamia, in what is modern-day southwest Iran.

25. Fictional corporation that made a jet-propelled unicycle : ACME
The Acme Corporation is a fictional company used mainly by Looney Tunes, and within the Looney Tunes empire it was used mostly in the “Road Runner” cartoons. Wile E. Coyote was always receiving a new piece of gear from Acme designed to finally capture the Road Runner, but the equipment always led to his downfall instead.

31. Half a nursery rhyme couple : JACK SPRAT
Jack Sprat was a nickname given in the 16th century to people of small stature. Jack featured in a proverb of the day:

32. Run through the gantlet, say : HAZE
“Running the gauntlet” was a military punishment in which an offender was forced to run between two lines of men who beat him as he passed.

34. Iowa politico Ernst : JONI
Joni Ernst was elected as a US Senator for Iowa in 2014. Ernst is a Republican who had previously served as a lieutenant colonel in the Iowa National Guard. She is the first female veteran in the US Senate, and the first woman to represent Iowa in the US Congress.

35. Credo : BELIEFS
“Credo” is the Latin word for “I believe”, and we use the term in English as an alternate for “creed”.

39. Car modified for flying in “The Absent-Minded Professor” : MODEL T
The Ford Model T was the first really affordable car that was offered for sale, and it was produced from 1908 to 1927. It was the Model T that ushered in the era of assembly line production, which greatly cut down the cost of manufacture. The engine was designed to run on petrol, kerosene or even ethanol. Famously, the Model T was known colloquially as the “Tin Lizzie”.

“The Absent-Minded Professor” is a 1961 Disney movie that is based on a short story called “A Situation of Gravity” by Samuel W. Taylor. The film is about a professor who invents a substance that he calls flubber, which gains energy on striking a hard surface. The name “flubber” comes from “flying rubber”. The 1961 movie starred Fred MacMurray in the title role. The film was so successful at the box office that it became the first Disney film to merit a sequel, namely “Son of Flubber” released in 1963. The original was remade in 1997 as “Flubber”, starring Robin Williams.

40. “Home Alone” star, 1990 : CULKIN
“Home Alone” is a 1990 film starring Macaulay Culkin that has become a Christmas classic. Culkin was nominated for a Best Actor Golden Globe for his performance, the youngest actor ever to be so honored.

41. Time Lords on “Doctor Who,” e.g. : ALIENS
The Time Lords are an alien race on the BBC sci-fi show “Doctor Who”. In fact, the title character, known as “the Doctor”, is a Time Lord.

42. Big name in retail : PENNEY
JC Penney’s department stores started out as the Golden Rule Store, founded by James Cash Penney and two partners in 1902 in Kemmerer, Wyoming. That first store is still operating today in Kemmerer. Sam Walton used to work for Penney’s in Des Moines, Iowa, before moving on to found the Walmart empire.

45. Broadway character who sings “The Rumor” : YENTE
“The Rumor” is a song from the musical “Fiddler on the Roof”.

48. Number of weeks in il Giro d’Italia : TRE
The Giro d’Italia (in English, the Tour of Italy), is one of the three big touring races in the sport of professional cycling:

50. When le Tour de France is held : ETE
One might spend the summer (été) under the sun (le soleil) in French-speaking countries.

51. Romeo’s was “a most sharp sauce” : WIT
At one point in William Shakespeare’s play “Romeo and Juliet”, Mercutio says to Romeo:
Thy wit is a very bitter sweeting. It is a most sharp sauce.