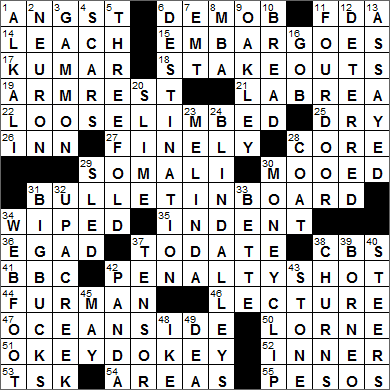 Today’s Wiki-est, Amazonian Googlies
Across
1. Kierkegaardian concept : ANGST
Soren Kierkegaard was a Danish philosopher and theologian, and I never really understood anything that he wrote!

6. Discharge from the R.A.F. : DEMOB
After WWII, there were about five million personnel in the British military. The process of “demobilising” these forces started about six weeks after Victory in Europe was declared, but there was tremendous frustration at the perceived slow rate at which men and women returned to “civvy street”. One of the symbols of demobilisation in Britain was the civilian suit of clues issues to each individual, the so-called “demob suit”.

14. Archibald ___, birth name of Cary Grant : LEACH
Cary Grant was an actor from England who made it big, really big in Hollywood. “Cary Grant” is a stage name, chosen by Archibald Leach. There’s a great moment in the film “His Girl Friday” when Grant says the line “I never had so much fun since Archie Leach died”, an inside joke.

15. Commercial blockers? : EMBARGOES
“Embargo” and “blockade” are two similar yet different terms. An embargo is a legal prohibition of trade with a particular country, whilst a blockade is an act of war, a militarily enforced prevention of the movement of goods and services. The term “embargo” came into English from Spanish, in the late 16th century.

17. Title film character whose last name is Patel : KUMAR
Indian-American actor Kal Penn made a name for himself in the “Harold & Kumar” series of comedy films. These so called “stoner comedies” are not my cup of tea, but I enjoyed him playing his more mainstream roles on TV’s “House” and “24”. He left the world of acting when President Obama won the 2008 election and now works as an Associate Director in the White House Office of Public Engagement (although he did leave the White House briefly to film the “Harold & Kumar” sequel).

21. Rancho ___ (famed fossil site) : LA BREA
Rancho La Brea was the name given to a square league of land in Southern California that is now covered by the Miracle Mile in Los Angeles’ Mid-Wilshire district and part of West Hollywood, including the famous La Brea Tar Pits.

30. Was bossy? : MOOED
Bossy the Cow is a character on “Sesame Street”.

38. 1970s fad items : CBS
A CBer is someone who operates a Citizens’ Band radio. In 1945, the FCC set aside certain radio frequencies for the personal use of citizens. The use of the Citizens’ Band increased throughout the seventies as advances in electronics brought down the size of transceivers and their cost. There aren’t many CB radios sold these days though, as they have largely been replaced by cell phones.

41. English channel : BBC
The marvelous British Broadcasting Corporation (BBC) is mainly funded by the UK government through a television licence fee that is levied annually on all households watching TV transmissions. Currently the fee is 145 UK pounds, about 230 US dollars.

44. University dubbed “The Country Club of the South” : FURMAN
Furman University is a private school located in Travelers Rest, just north of Greenville, South Carolina. The school was founded in 1825 by the South Carolina Baptist Convention as the Furman Academy and Theological Institution.

47. California city whose name describes its location : OCEANSIDE
The city of Oceanside, California is located just south of Camp Pendleton, the busiest Marine Corps military base in the whole country.

50. TV producer Michaels : LORNE
Lorne Michaels is a television producer, best known as the creator of “Saturday Night Live” (SNL). We can get some insight into Michaels’ character and demeanor by watching the show “30 Rock”. The character played by Alec Baldwin is inspired by Michaels.

55. Mariachi’s earnings : PESOS
The coin called a “peso” is used in many Spanish-speaking countries around the world. The coin originated in Spain where the word “peso” means “weight”. The original peso was what we know in English as a “piece of eight”, a silver coin of a specific weight that had a nominal value of eight “reales”.

The name “Mariachi”, used for a typically Mexican popular band, is said to be a corruption of the French word for “marriage” (i.e. “mariage”). This perhaps dates back to the times of Napoleon II when France had political and cultural influence over Spain.

Down
1. Basic thing : ALKALI
The “opposite” of an acid is a base. Acids turn litmus paper red, and bases turn it blue. Acids and bases react with each other to form salts. An important subset of the chemicals called bases are the alkalis, the hydroxides of the alkali metals and of ammonium. The term “alkali” is sometimes used interchangeably with “base”, especially if that base is readily soluble in water.

2. Electrical cell : NEURON
A nerve cell is more correctly called a neuron, and the long nerve fiber that is part of a neuron is called the axon.

3. Decisive board game victory : GAMMON
In the marvelous game of backgammon, each player is trying to remove all his or her men before the opponent. If such a victory can be achieved without the opponent removing even one man, then the player wins a “gammon” and gets double points.

8. Wharton deg. : MBA
Wharton is the business school of the University of Pennsylvania, in Philadelphia.

9. Buffalo Bill’s Wild West Show performer : OAKLEY
Many regard Annie Oakley as the first American female superstar, given her celebrity as a sharpshooter in Buffalo Bill’s Wild West Show. She toured with the show all over Europe, and performed her act for the likes of Queen Victoria of England and Kaiser Wilhelm II of Germany. Supposedly, using a .22 caliber rifle from 90 feet away, Oakley could split a playing card edge-on, and shoot five or six holes in the card before it hit the ground!

10. Gluten-rich food : BREAD
Gluten is a protein mixture found in foods processed mainly from wheat. The sticky properties of gluten are used in making bread, giving dough its elasticity and making the final product very chewy. “Gluten” is the Latin word for “glue”.

11. Typical sedan : FOUR-DOOR
The American “sedan” car is the equivalent of the British “saloon” car. By definition, a sedan car has two rows of seating and a separate trunk (boot in the UK), although in some models the engine can be at the rear of the car.

16. Mouth, slangily : GOB
“Gobsmack” is slang from the British Isles. “Gob” is also slang, for a mouth. So someone who is gobsmacked has received “a smack in the mouth”, is stunned.

23. Girl’s name that begins the lyrics of Neil Diamond’s “Solitary Man” : MELINDA
“Solitary Man” is a 1966 song written and recorded by Neil Diamond. It was actually Diamond’s debut single, and had moderate success. After Diamond began to make a name for himself, “Solitary Man” was re-released as a single in 1970 and made it to #21 in the charts.

28. Mackinaw or Norfolk : COAT
Mackinaw cloth is a heavy and dense woolen cloth that repels water. It is used to make a short coat that is known as a Mackinaw jacket, which is very much associated with lumberjacks, especially in the mid-1800s. The jacket was first made by women in in the Mackinaw region of present-day Michigan, hence the name.

The Norfolk was originally designed as a shooting jacket. It has box pleats on the front and back and does not bind when the arms are raised to fire a gun. The jacket is name for either the county of Norfolk in England, or the Duke of Norfolk.

29. Malamute’s burden : SLED
The Alaskan Malamute is a breed of dog that was bred as a working dog, in particular to pull sleds. The breed takes its name from the Mahlemut tribe of Inuit people.

33. Davis of “Of Human Bondage” : BETTE
“Of Human Bondage” is a 1934 film that is an adaptation of a 1915 novel of the same name by W. Somerset Maugham. The film stars Leslie Howard and Bette Davis, and is the movie that propelled Davis into stardom.

37. Muscle type : TENSOR
A tensor muscle is one that tightens or stretches a part of the body.

39. World’s third-largest island : BORNEO
Borneo is the third largest island on the planet (after Greenland and New Guinea), and is located north of Australia in Maritime Southeast Asia. Most of the island is part of Indonesia (taking up 73% of the island) with almost all of the remainder being part of Malaysia (26%). The final 1% is home to the sovereign state of Brunei.

42. The San Diego Zoo’s Gao Gao or Zhen Zhen : PANDA
Gao Gao is a male panda at the San Diego Zoo that arrived from China in 2003. There he was mated with the zoo’s female panda called Bai Yun. The pair have five children, one of whom is the female Zhen Zhen.

48. “Alibi ___” (Ring Lardner story) : IKE
“Alibi Ike” is a short story by Ring Lardner that was made into a romantic comedy film in 1935 starring Joe E. Brown and Olivia de Havilland. Brown plays the title character, a baseball player who is always making excuses, hence his nickname. “Alibi Ike” was actually the first film to be released featuring Olivia de Havilland.