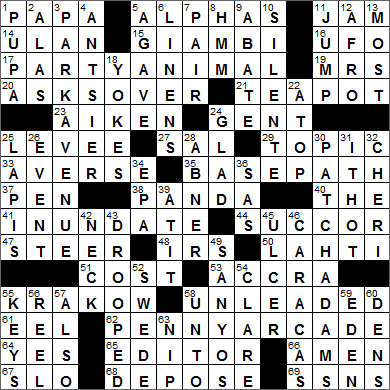 CROSSWORD SETTER: Patrick Blindauer
THEME: P and A … each of today’s themed answers is a two-word phrase, with the initials P and A:
38A. World Wildlife Fund logo … or a three-word hint to the answers to the four starred clues : PANDA (or “P and A”)

Today’s Wiki-est, Amazonian Googlies
Across
1. “___ Don’t Preach” (#1 Madonna hit) : PAPA
“Papa Don’t Preach” is a 1986 song recorded by Madonna. The song’s lyrics are based on teenage gossip heard outside the studio, chatter between schoolgirls from LA’s North Hollywood High School. Subjects mentioned in the words include teenage pregnancy and abortion.

11. Many a jazz session : JAM
The use of “jam”, to mean an improvised passage performed by a whole jazz band, dates back to the late twenties. This gave rise to “jam session”, a term used a few years later. The use of “jam” in this context probably stems from the meaning of “jam” as something sweet, something excellent.

14. Mongolian for “red” : ULAN
The name “Ulan Bator” translates from Mongolian as “the Red Hero”, and is Mongolia’s capital city. The “Red Hero” name was chosen in honor of the country’s national hero, Damdin Sükhbaatar. Sükhbaatar fought alongside the Soviet Red Army in the fight for liberation from Chinese occupation.

15. Jason who was the 2000 A.L. M.V.P. : GIAMBI
Jason Giambi is a Major League first baseman and designated hitter. In recent years, Giambi’s reputation has been tarnished as he admitted to the FBI in 2003 that he injected himself with human growth hormone. Giambi has apologized to the public since then for the wrongdoing.

19. Virginia Woolf’s “___ Dalloway” : MRS
Virginia Woolf was an English author active in the period between the two World Wars. Woolf’s most famous novels were “Mrs. Dalloway”, “To the Lighthouse” and “Orlando”. She also wrote a long essay entitled “A Room of One’s Own” in which she states “A woman must have money and a room of her own if she is to write fiction.”

23. Singer-turned-politician Clay : AIKEN
Clay Aiken is one of the singing stars discovered on “American Idol”. Aiken had filled out an application to appear on the show “Amazing Race”, but a friend persuaded him to try out for “American Idol” instead. Fans of Clay Aiken call themselves “Claymates”. Aiken ventured into politics in 2014, winning the Democratic primary in the race for House Representative in the second congressional district of North Carolina. Aiken ultimately lost the race to the Republican incumbent.

25. Breaking point? : LEVEE
A levee is an artificial bank usually made of earth, running along the length of a river. A levee is designed to hold back river water at a time of potential flooding. “Levée” is the French word for “raised” and is an American term that originated in French-speaking New Orleans around 1720.

27. ___ soda : SAL
Sodium carbonate is a well known as a water softener sold for use in laundry, and is variously described as Sal Soda, Washing Soda and Soda Crystals.

38. World Wildlife Fund logo … or a three-word hint to the answers to the four starred clues : PANDA (or “P and A”)
Taxonomic classification of the giant panda has been a subject of great debate for years, the main question being whether it belongs to the bear or raccoon family. The accepted opinion these days, based on molecular studies, seems to be that the panda is in fact a true bear.

The World Wildlife Fund was founded in 1961. It’s mission is …

50. “Swing Shift” actress Christine : LAHTI
Christine Lahti is an actress probably best known for playing Dr. Kate Austen on the TV medical drama “Chicago Hope”. If you read “The Huffington Post” you might run across her as well, as Lahti is a contributing blogger.

53. Ghana’s capital : ACCRA
Accra sits on Ghana’s coast and is a major seaport as well as the country’s capital city. The name “Accra” comes from a local word “Nkran” meaning “ants”, a name chosen because of the large number of anthills found in the area when the city was founded.

55. Polish city that’s home to John Paul II International Airport : KRAKOW
Kraków is the second largest city in Poland, and was a capital for many centuries. The Archbishop of Kraków was Karol Wojtyla, one of the most famous people to have lived in the city. In 1978 Archbishop Wojtyla was installed as Pope John Paul II. Kraków was also where the bagel was invented, in the 16th century.

62. *Old coin-op locale : PENNY ARCADE
Our word “arcade” comes from the Latin “arcus” meaning “arc”. The first arcades were passages made from a series of arches. This could be an avenue of trees, and eventually any covered avenue. I remember arcades lined with shops and stores when I was growing up on the other side of the Atlantic. Arcades came to be lined with lots of amusements, resulting in amusement arcades and video game arcades.

64. “Indubitably” : YES
Something described as “indubitable” cannot be doubted.

IRS form W-9 is a Request for Taxpayer Identification Number and Certification. The W-9 is filled out by employees and used by employers for payroll purposes. The firm is not submitted to the IRS.

Down
1. Part of a life transformation : PUPA
The pupa is an intermediate stage in the development of an insect. All four stages are: embryo, larva, pupa and imago.

3. *Manhattan boulevard : PARK AVENUE
Park Avenue in New York City used to be known as Fourth Avenue, and for much of its length carried the tracks of the New York and Harlem Railroad. When the line was built, some of it was constructed by cutting through the length of the street and then forming underground tunnels by covering over the line with grates and greenery. This greenery formed a parkland between 34th and 40th Streets, and in 1860 the grassy section of Fourth Avenue was renamed Park Avenue, a name that was eventually used for the whole thoroughfare.

4. More fidgety : ANTSIER
The word “antsy” embodies the concept of “having ants in one’s pants”, meaning being nervous and fidgety. However, “antsy” has been used in English since the 1830s, whereas “ants in the pants” originated a century later.

5. Tequila source : AGAVE
Tequila is a spirit made from the blue agave. The drink takes its name from the city of Tequila, located about 40 miles northwest of Guadalajara.

11. Word with seat or suit : JUMP
A jump seat on an aircraft is more correctly called an auxiliary crew station. Jump seats usually fold away. A jump seat in a cockpit might be used by a trainee pilot, for example. The seats occupied by most of the flight attendants also fold away, and can be termed jump seats.

18. Gets the team together? : YOKES
A yoke is that wooden beam used between a pair of oxen so that they are forced to work together.

25. Deep blue stone : LAPIS
Lapis lazuli is a blue, semi-precious stone mined mainly in Afghanistan. Lapis Lazuli is Latin for “stone of Lazhward”, referring to the Persian name for the location where the stone was mined. Our word “azure”, a shade of blue, has the same root.

28. Daisy Mae’s love, in the funnies : ABNER
Daisy Mae Scragg was the vampish woman who chased Li’l Abner trying to goad him into marriage. This went on for 15 years in the cartoon strip until creator Al Capp succumbed to public pressure and married the couple at the end of March 1952. The marriage was such a big event that it made the cover of “Life” magazine.

31. “Some Like ___” : IT HOT
“Some Like it Hot” is such a fun movie, released in 1959 and directed by Billy Wilder. The big three in the cast are of course Marilyn Monroe, Tony Curtis and Jack Lemmon. Several years ago a stage version of “Some Like It Hot” was playing in San Francisco, with Tony Curtis in the cast. This time he played the older man who was wooing the Jack Lemmon character in the movie.

32. Suisse sweetheart : CHERI
“Cheri” is a form of familiar address in French, meaning “dear, darling, precious”. “Cheri” is the form used when talking to/of a male, and “cherie” for a female.

1984’s “Ghostbusters” really is an entertaining movie. It stars Bill Murray and Harold Ramis, and was directed by Ivan Reitman (a trio that also worked together on 1981’s “Stripes”). The first draft of the screenplay was written by another star of the movie, Dan Akroyd. Akroyd originally envisioned “Ghostbusters” as a vehicle for himself and John Belushi, but sadly Belushi passed away before the project could be realized.

In the film “Ghostbusters”, Walter Peck is an EPA lawyer who gives the ghostbusting team a bad time for operating without the appropriate licenses. Peck is played by actor William Atherton.

36. Copenhagen carrier : SAS
SAS was formerly known as Scandinavian Airlines System and is the flag carrier of three countries: Denmark, Norway and Sweden.

Copenhagen is the largest city and the capital of Denmark. I have never visited Copenhagen, but I hear it is a wonderful metropolis with a marvelous quality of life. The city is also very environmentally friendly, with over a third of its population commuting to work by bicycle.

42. Make out : NECK
The term “necking” applies to kissing and caressing. I like what Groucho Marx had to say on the subject: “Whoever named it necking was a poor judge of anatomy.”

45. Cause of a gut feeling? : ULCER
Until fairly recently, a peptic ulcer was believed to be caused by undue amounts of stress in one’s life. It is now known that 70-90% of all peptic ulcers are in fact associated with a particular bacterium.

46. South American capital : CARACAS
Caracas is the capital of Venezuela, and is located in the north of the country. The original settlement of Caracas was named by the Spanish using the name of a local indigenous tribe.

49. Some TVs and digital cameras : SANYOS
Sanyo is a Japanese electronics manufacturer based near Osaka and founded in 1947. The company name means “three oceans” reflecting the company’s original aim to sell its products all around the world (across three oceans: the Atlantic, the Pacific and the Indian).

52. Anders Celsius, for one : SWEDE
Anders Celsius was a Swedish astronomer. The temperature scale that Celsius created was the reverse of that used today, with “zero” representing the boiling point of water and “100” representing water’s freezing point. This scale was “upended” (in 1744) just after Celsius died, by the Swedish botanist Carolus Linnaeus. The resulting temperature scale then became known as the centigrade scale for over 200 years, until in 1948 it was decided to adopt the “degree Celsius”. So, anyone still using “degrees centigrade” is actually way behind the times …

54. St. ___ of Assisi : CLARE
Clare of Assisi was one of the first followers of Saint Francis of Assisi. Clare was the founder of the Order of Poor Ladies. The order still exists today and is now known as the Poor Clares in her honor.

59. Paradise lost : EDEN
In the Christian tradition, the “fall of man” took place in the Garden of Eden when Adam and Eve succumbed to the temptation of eating from the tree of knowledge of good and evil, against the bidding of God. As a result, Adam and Eve were banished from Eden to prevent them becoming immortal by eating from the tree of life. The first humans had transitioned from a state of innocent obedience to a state of guilty disobedience.