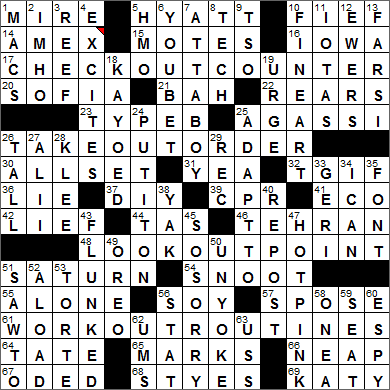 CROSSWORD SETTER: Julian Lim
THEME: Out with Odd Meanings … each of today’s themed answers derives from a common two-word phrase in which the first word ends with -OUT. However, the clue refers to an alternative meaning for each phrase, with the suffix -OUT used as the word OUT:

17A. Eye an election official? : CHECK OUT COUNTER (from “checkout counter”)
26A. Decimate a monastery’s occupants? : TAKE OUT ORDER (from “takeout order”)
48A. Warning shouted to a lacrosse defenseman? : LOOK OUT, POINT! (from “lookout point”)
61A. Develop one’s comedy acts? : WORK OUT ROUTINES (from “workout routines”)

Today’s Wiki-est, Amazonian Googlies
Across
5. Hilton competitor : HYATT
The Hyatt hotel chain takes its name from the first hotel in the group, that was purchased in 1957 i.e. Hyatt House at Los Angeles International Airport. Among other things, Hyatt is famous for designing the world’s first atrium hotel, the Hyatt Regency in Atlanta.

Conrad Hilton was a native of New Mexico, but he bought his first hotel in Cisco, Texas, in 1919. He did well on the deal and opened up hotels all over Texas in the following years, and built the first highrise Hilton Hotel in Dallas. Hilton went on to build the world’s first international hotel chain. Hilton was married three times, most famously to actress Zsa Zsa Gabor from 1942 to 1946.

10. Overlord’s domain : FIEF
In the days of feudalism, a “fief” was basically a “fee” (the words “fee” and “fief” have the same origins) paid by a Lord in exchange for some benefit to him, perhaps loyalty, or military service. The fief itself was often land granted by the Lord. We use the term “fiefdom” (and sometimes “fief) figuratively, to describe a sphere of operation controlled by one dominant person or entity.

14. Green card issuer, informally : AMEX
Amex is short for American Express. In dollar terms, there are more transactions conducted in the US using the Amex card than any other card.

15. Specks : MOTES
Mote is just another word for a speck of dust.

16. Word repeated in ___ City, ___ : IOWA
Iowa City was founded in 1839 in a move to relocate the capital of the Iowa Territory nearer to the center of the territory. The city was constructed, and officially made the capital in 1841. The Iowas Territory was admitted to the union as a state in 1846, and the state capital moved to Des Moines in 1857.

20. Bulgaria’s capital : SOFIA
Sofia is the capital of Bulgaria. Natives pronounce the name “Sofia” with the emphasis on the “o”, while the rest of us tend to stress the “i”. Bulgarians do agree with us though when it comes to the girl’s name “Sofia”, then they stress the “i” like we do!

23. Laid-back : TYPE B
The Type A and Type B personality theory originated in the fifties. Back then, individuals were labelled as Type A in order to emphasize a perceived increased risk of heart disease. Type A personality types are so called “stress junkies”, whereas Type B types are relaxed and laid back. But there doesn’t seem to be much scientific evidence to support the linkage between the Type A personality and heart problems.

25. Tennis champion with the 2009 memoir “Open” : AGASSI
Renowned tennis professional Andre Agassi wrote an autobiography called “Open”, published in 2009. An amazing revelation in the book is that Agassi’s famous head of hair was actually a wig for much of his playing career. Can you imagine how hard it must have been to play tennis at his level with a rug stuck on?

32. Desk jockey’s happy yell : TGIF!
“Thank God It’s Friday” (TGIF) is a relatively new expression that apparently originated in Akron, Ohio. It was a catchphrase used first by disk jockey Jerry Healy of WAKR in the early seventies. That said, one blog reader wrote me to say that he had been using the phrase in the fifties.

36. Prevarication : LIE
“To prevaricate” is to stray from the truth. The term comes from a Church Latin word meaning “walk crookedly”.

37. Letters on some kits : DIY
Back in Ireland we don’t have “hardware stores” as such, but rather DIY Centres (and that’s the spelling). DIY is an acronym standing for “Do It Yourself”.

PhD is an abbreviation for “philosophiae doctor”, Latin for “teacher of philosophy”.

46. Capital about 60 miles from the Caspian Sea : TEHRAN
Tehran is the capital of Iran and is the largest city in the Middle East, with a population of about 8.5 million. Iran has been around an awful long time and Tehran is actually the country’s 31st national capital.

The Caspian Sea is a landlocked sea lying between Asia and Europe. By some definitions, the Caspian is the largest lake on the planet. The name “Caspian” comes from the Caspi people who lived to the southwest of the sea in South Caucasus.

48. Warning shouted to a lacrosse defenseman? : LOOK OUT, POINT! (from “lookout point”)
In a female lacrosse team (which has fewer players than a male team), the most-defensive position in front of the goalie is called “point”. Point is equivalent to sweeper in soccer.

51. Heavenly ring bearer? : SATURN
Saturn is easily visible from Earth with the unaided eye, but we need some help to see the planet’s famous rings. Galileo was the first person to see Saturn’s rings, when he turned his primitive telescope towards the night sky in 1610. However, he misinterpreted what he was observing and assumed that the rings were in fact two smaller planets located at either side of the larger Saturn.

54. High-and-mighty sort : SNOOT
“Snoot” is a variant of “snout” and is a word that originated in Scotland. The idea is that someone who is “snooty”, or snouty, tends to look down his or her nose at the rest of the world.

56. ___ sauce : SOY
Soy sauce is made by fermenting soybeans with a mold in the presence of water and salt. Charming …

64. ___ Modern (London museum) : TATE
The museum known as “the Tate” is actually made up of four separate galleries in England. The original Tate gallery was founded by Sir Henry Tate as the National Gallery of British Art. It is located on Millbank in London, on the site of the old Millbank Prison, and is now called Tate Britain. There is also the Tate Liverpool in the north of England located in an old warehouse, and the Tate St. Ives in the west country located in an old gas works. My favorite of the Tate galleries is the Tate Modern which lies on the banks of the Thames in London. It’s a beautiful building, a converted power station that you have to see to believe.

68. Afflictions sometimes caused by sleep deprivation : STYES
A stye is a bacterial infection of the sebaceous glands at the base of the eyelashes, and is also known as a hordeolum.

69. Musical Perry : KATY
Katy Perry is an American singer who grew up listening to and singing gospel music, as she was the daughter of two Christian pastors. In fact, her first musical release was a gospel album in 2001. She has branched out since then. Her first successful single was “Ur so Gay”, followed by “I Kissed A Girl”. She was married (only for a year) to the British comedian Russell Brand, until 2012.

Down
1. Safari vehicles? : MACS
Macintosh (also “Mac”) is a line of computers from Apple Inc. The first Mac was introduced in 1984, and I remember someone showing me one at work in those early days of personal computing. There was a piece of white plastic connected to the main computer by a cord, and I was amazed when the guy showed me that it controlled where the cursor was on the screen. My colleague told me that this lump of plastic was called “a mouse” …

9. Chinese menu general : TSO
General Tso’s chicken is an American creation, often found on the menu of a Chinese restaurant. The name General Tso may be a reference to General Zuo Zongtang of the Qing Dynasty, but there is no clear link.

11. Bitsy pieces : IOTAS
Iota is the ninth letter in the Greek alphabet. We use the word “iota” to portray something very small as it is the smallest of all Greek letters.

13. 46-Across tongue : FARSI
“Farsi” is one of the local names for Persian, an Iranian language.

28. “Der Goldfisch” painter : KLEE
The artist Paul Klee was born in Switzerland, but studied art in Munich in Germany. You can see many of Klee’s works in the San Francisco Museum of Modern Art, and if you get to Bern in Switzerland, even more of them can be seen at the Zentrum Paul Klee that was opened in 2005.

33. Spice Girl Halliwell : GERI
Geri Halliwell was called Ginger Spice because of her red hair when she was with the Spice Girls. Halliwell was quite a bit older than the rest of the group and so sometimes she was less charitably referred to as “Old Spice”.

40. Share, as a blog entry : REPOST
Many folks who visit this website regard it as just that, a website. That is true, but more correctly it is referred to as a blog, as I make regular posts (actually daily posts) which then occupy the “front page” of the site. The blog entries are in reverse chronological order, and one can just look back day-by-day, reading older and older posts. Blog is a contraction of the term “web log”.

47. Popular color at Victoria’s Secret : HOT PINK
Victoria’s Secret was founded in 1977 in San Francisco, California. The founder wanted to create an environment where men were comfortable buying lingerie for their wives and girlfriends, an alternative to a department store.

49. Bicolor snack : OREO
The Oreo was the best-selling cookie in the 20th century, and almost 500 billion of them have been sold since they were introduced in 1912 by Nabisco. In those early days the creme filling was made with pork fat, but today vegetable oils are used instead. If you take a bite out of an Oreo sold outside of America you might notice a difference from the homegrown cookie, as coconut oil is added in the overseas version to give a different taste.

50. Separate, as oxen : UNYOKE
A yoke is a wooden beam used between a pair of oxen so that they are forced to work together.

53. Rich European dessert : TORTE
A torte is a type of cake made primarily with eggs, sugar and ground nuts (but no flour).

56. Paramedic’s “pronto” : STAT
The exact etymology of “stat”, a term meaning “immediately” in the medical profession, seems to have been lost in the mists of time. It probably comes from the Latin “statim” meaning “to a standstill, immediately”. A blog reader has helpfully suggested that the term may also come from the world of laboratory analysis, where the acronym STAT stands for “short turn-around time”.

58. Ready for service : ONE-A
The US government maintains information on all males who are potentially subject to military conscription, using what is called the Selective Service System(SS). In the event that a draft was held, men registered would be classified into groups to determine eligibility for service. Class 1-A registrants are those available for unrestricted military service. Other classes are 1-A-O (conscientious objector available for noncombatant service), 4-A (registrant who has completed military service) and 4-D (Minister of religion).

63. ___ Midway : USS
The latest USS Midway was an aircraft carrier that was launched in 1945. The Midway remained in service for 47 years, and was the flagship in the Persian Gulf for Operation Desert Storm in 1991. She was decommissioned in 1992 and can now be visited in Sand Diego as the USS Midway Museum.