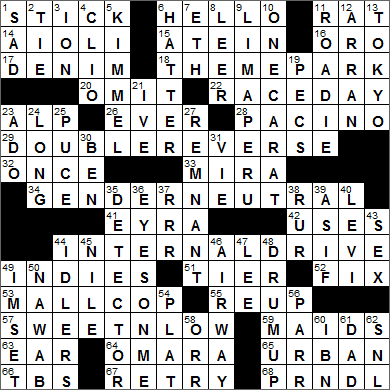 CROSSWORD SETTER: David Woolf
THEME: PRNDL … each of today’s themed answers ends with the name of an automatic transmission gear:

68A. Quintet representing the ends of the answers to the five starred clues : PRNDL

Today’s Wiki-est, Amazonian Googlies
Across
6. What “you had me at,” in a classic movie line : HELLO
“Jerry Maguire” is a 1996 film starring Tom Cruise, Cuba Gooding, Jr. and Renée Zellweger. The title character is played by Cruise, and is a sports agent. There are several liines oft quoted from “Jerry Maguire” including:

14. Sauce commonly served with seafood : AIOLI
To the purist, especially in Provence in the South of France, the “home” of aioli, aioli is prepared just by grinding garlic with olive oil. However, other ingredients are often added to the mix, particularly egg yolks.

17. Material that may be acid-washed : DENIM
Denim fabric originated in Nimes in France. The French phrase “de Nimes” (from Nimes) gives us the word “denim”. Also, the French phrase “bleu de Genes” (blue of Genoa) gives us our word “jeans”.

18. *Legoland, for one : THEME PARK
There are currently six Legoland theme parks in the world, with two here in North America. One of the US parks is in Winter Haven, Florida and the other is in Carlsbad, California (which is the one that I’ve visited … a fun place).

22. Busy time at Speedway or Churchill Downs : RACE DAY
Churchill Downs is a thoroughbred racetrack located in Louisville, Kentucky that is famous for hosting the Kentucky Derby each year. The track is named for John and Henry Churchill who once owned the land on which the course was built.

23. 1992 or 2006 Winter Olympics locale : ALP
Albertville is a city in south-eastern France, in the Alps. The city was established in 1836 by King Charles Albert of Sardinia, which resulted in the name “Albertville”. Albertville is perhaps most famous today as the host of the 1992 Winter Olympic Games.

The 2006 Winter Olympics were held in Turin, in the Italian Alps. The Turin games were one of the most expensive Winter Games ever staged, and sadly much of that cost was a huge overrun. The event ended up costing almost twice what had been budgeted.

26. Next-to-last word in a fairy tale : EVER
… and they all lived happily ever after.

33. Actress Sorvino : MIRA
Mira Sorvino is an American actress, winner of an Oscar for her supporting role in the 1995 Woody Allen movie “Mighty Aphrodite”. Sorvino also played a title role opposite Lisa Kudrow in the very forgettable “Romy and Michele’s High School Reunion”.

41. South American wildcat : EYRA
The jaguarundi is a small wild cat that is native to Central and South America. Also called the eyra cat, the jaguarundi used to be found in Texas as well. It is believed they are extinct in the US now.

55. Sign on again : RE-UP
“To re-up” is an informal term used in the world of the military meaning to sign up again for another tour of duty.

57. *Equal rival : SWEET‘N LOW
Sweet’n Low is an artificial sweetener with saccharin as the main ingredient. At least that’s in the US. In Canada the main ingredient is sodium cyclamate. Saccharin was banned in Canada in 1977 due to fears that the sweetener caused cancer. The original studies showing the incidence of cancer in lab rats were eventually shown to be faulty, and so the ban was lifted in 2014.

64. TV actor Jason : O’MARA
Jason O’Mara is an actor from Ireland who plies his trade over here in the US. O’Mara played the lead role in the American version “Life on Mars” and on “Terra Nova”.

65. One of eight popes : URBAN
There have been eight popes named Urban who have led the Roman Catholic Church. Pope Urban I was in office from 222 to 230 and is the only one of the eight to have been sanctified. Urban VII’s papacy was the shortest in the history of the church. He died from malaria just 13 days after having been chosen as Pope in September 1590.

68. Quintet representing the ends of the answers to the five starred clues : PRNDL
PRNDL … that would be Park, Reverse, Neutral, Drive and Low. The gear shift for an automatic transmission is sometimes known familiarly as the “prindle stick”, from the abbreviations PRNDL.

Down
3. Lithium-___ battery : ION
Lithium-ion and nickel-cadmium are types of rechargeable batteries.

4. Award coveted on “Mad Men” : CLIO
The Clio Awards are the Oscars of the advertising world and are named after Clio, the Greek Muse of History. Clio was also the recorder of great deeds, the proclaimer and celebrator of great accomplishments and a source of inspiration and genius. The Clio Awards were first presented in 1959.

“Mad Men” is AMC’s flagship show. The series is set in the sixties and explores life in and around the advertising business on Madison Avenue in New York City. “Mad Men” brings you right back to the days of three-martini lunches and chain-smoking of cigarettes. Great stuff …

6. Mad ___ : HATTER
In Lewis Carroll’s “Alice’s Adventures in Wonderland”, the Hatter makes his first appearance in a chapter called “A Mad Tea-Party”. This event is usually described as “The Mad Hatter’s Tea Party”, even though the Hatter was just a guest. The host was the March Hare. In fact, the phrase “mad Hatter” doesn’t appear anywhere in Lewis Carroll’s novel, although the character, the Hatter (and sometimes “Hatta”), is described as mad.

9. Home of the oldest continuously functioning university in the Americas : LIMA, PERU
Lima is the capital city of Peru. Lima was founded in 1535 by the Spanish conquistador Francisco Pizarro, who named it “la Ciudad de los Reyes” (the City of Kings). He chose this name because the decision to found the city was made on January 6th, the feast of the Epiphany that commemorates the visit of the three kings to Jesus in Bethlehem. Lima is home to the oldest university in all of the Americas, as San Marco University was founded in 1551 during the days of Spanish colonial rule.

10. Common diamond measure : ONE CARAT
A carat is a unit of mass used in measuring gemstones that is equal to 200 mg.

11. One who lines up speakers? : ROADIE
A “roadie” is someone who loads, unloads and sets up equipment for musicians on tour, on the road.

13. Locale of a Godzilla rampage : TOKYO
Godzilla is a Japanese invention. The first in a very long series of films was released way back in 1954. The original name in Japanese was “Gojira”, but this was changed to Godzilla for audiences outside of Japan. “Gojira” is a combination of “gorira” and “kujira”, the Japanese words for gorilla and whale, apt because Godzilla is a big ape-like creature that came out of the deep.

19. Weightlifter’s pride : PECS
“Pecs” is the familiar term for the chest muscle, more correctly known as the pectoralis major muscle. “Pectus” is a the Latin word for “breast, chest”.

25. Brownish purple : PUCE
The name of the purple shade known as “puce” has a strange derivation. “Puce” came into English from French, in which language “puce” means “flea”. Supposedly, puce is the color of a flea!

30. #1 Michael Jackson song about an 11-Across : BEN
The song “Ben” was recorded by Michael Jackson in 1972. “Ben” was originally written for Donny Osmond, but as he wasn’t available to record it was offered to Michael Jackson. The song was written as the theme song for the 1972 horror film “Ben”, the sequel to the icky but successful “Willard”, a killer-rat movie.

37. School basics, in a manner of speaking : RRR
Reading, ‘riting and ‘rithmetic …

38. Pioneering sci-fi play : RUR
Karel Čapek was a Czech writer noted for his works of science fiction. Čapek’s 1920 play “R.U.R.” is remembered in part for introducing the world to the word “robot”. The words “automaton” and “android” were already in use, but Capek gave us “robot” from the original Czech “robota” meaning “forced labor”. The acronym “R.U.R.”, in the context of the play, stands for “Rossum’s Universal Robots”.

40. Big name in jeans : LEVI
Levi Strauss was the founder of the first company in the world to manufacture blue jeans. Levi Strauss & Co. opened in 1853 in San Francisco. Strauss and his business partner were awarded a patent in 1873 for the use of copper rivets to strengthen points of strain on working pants.

45. West ___ virus : NILE
West Nile virus (WNV) is named for the West Nile region in Uganda where it was first identified. The virus has since spread throughout the world. WNV claimed the lives of 286 people in the US in 2012. The virus is mosquito-borne, and there is no vaccine available.

46. What the Heimlich maneuver clears : AIRWAY
Henry Heimlich is an American physician who popularized the abdominal thrusts used to help choking victims, which came to be known as the Heimlich Maneuver. As an aside, Heimlich is the first cousin of Anson Williams, the actor who played “Potsie” on TV’s “Happy Days”!

47. Big name in jeans : LEE
The Lee company famous for making jeans was formed in 1889, by one Henry David Lee in Salina, Kansas.

50. Muslim princely title : NAWAB
A “nawab” (also “nabob”) was a deputy governor in the Mogul empire in India. The term is also used as an Muslim honorary title in India and Pakistan. We use “nabob” in English for a person of wealth and prominence.

54. Map showing property divisions : PLAT
A plat is a map showing actual and planned features, so a town might have a plat showing existing and intended buildings.

58. Bobby who won two Stanley Cups : ORR
Bobby Orr is regarded as one of the greatest hockey players of all time. By the time he retired in 1978 he had undergone over a dozen knee surgeries. At 31 years of age, he concluded that he just couldn’t skate anymore. Reportedly, he was even having trouble walking …

61. Jay on “Modern Family,” e.g. : DAD
Ed O’Neill made it big on television playing Al Bundy on the sitcom “Married … with Children”, not a show I ever cared for. However, I really enjoy watching O’Neill playing Jay Pritchett on the excellent sitcom “Modern Family”.

62. Show for which Conan O’Brien once wrote, in brief : SNL
Before Conan O’Brien came to fame as a late night talk show host he was a writer. He wrote for both “Saturday Night Live” and “The Simpsons”.