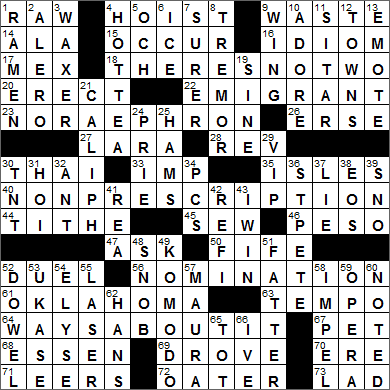 CROSSWORD SETTER: Jacob Stulberg
THEME: There’s No Two Ways About It … each of today’s themed answers starts with NO- and ends with -ON:

Today’s Wiki-est, Amazonian Googlies
Across
4. Raise, as Old Glory : HOIST
The person who coined the phrase “Old Glory” with reference to the American flag was Captain William Driver, a shipmaster from Salem, Massachusetts. As Driver was leaving on an 1831 voyage aboard the brig Charles Doggett, he unfurled the American flag that he had just been given by a group of friends. As the flag caught the breeze, he uttered the words, “Old Glory!”. That’s the story anyway. On that same voyage, Charles Doggett rescued the famous mutineers of the HMS Bounty, after he found them on Pitcairn Island.

16. “In the red,” e.g. : IDIOM
The idiom “in the red” means “operating at a loss”. The phrase comes from the color of ink in a ledger, in which losses are written in red ink and profits in black.

17. NAFTA signatory: Abbr. : MEX
The North American Free Trade Agreement (NAFTA) is between Canada, Mexico and the United States. When NAFTA came into force in 1994 it set up the largest free trade zone in the world.

22. One headed for Ellis Island, say : EMIGRANT
Ellis Island is an exclave of New York City that is geographically located within Jersey City, New Jersey. The name comes from a Samuel Ellis who owned the island around the time of the American Revolution.

23. “Silkwood” screenwriter : NORA EPHRON
Nora Ephron had many talents, including writing film scripts and novels. Many of the movies that she wrote, she also directed. These would include some of my favorite movies of all time like “Sleepless in Seattle”, “You’ve Got Mail” and most recently, the wonderful “Julie & Julia”. And, did you know that Nora Ephron’s second marriage was to journalist Carl Bernstein of Watergate fame? She wrote an autobiographical novel based on her life with Bernstein, dealing in particular with Bernstein’s affair with the daughter of British Prime Minister James Callaghan.

“Silkwood” is a 1983 film about a nuclear power plant whistleblower. The movie is based on the true story of labor activist Karen Silkwood who was killed in a car accident under suspicious circumstances. She had just alleged wrongdoing at the power plant in which she worked. In real life, the power plant operators were found liable for Silkwood’s death and settled with her estate for $1.3 million.

27. ___ Croft (Angelina Jolie role) : LARA
Lara Croft was first introduced to the world as the main character in a pretty cool video game (I thought) called “Tomb Raider”, back in 1996. Lara Croft moved to the big screen in 2001 and 2003, in two pretty awful movie adaptations of the game’s storyline. Angelina Jolie played Croft, and she did a very energetic job.

Angelina Jolie is a remarkably successful Hollywood actress from Los Angeles, California. Jolie has acting in her blood as her father is actor Jon Voight. Her godparents are actors Jacqueline Bisset and Maximilian Schell.

44. Mormon’s obligation : TITHE
A tithe is a traditional payment of one tenth of a person’s annual income and is usually given to a church. Tithing is a practice taught in many traditions, and according to a 2002 survey, about 3% of American adults donate 10% or more of their income to a church.

46. Bit of dinero : PESO
Dinero is the Spanish word for money, as well as a slang term for money here in the US.

50. Instrument in the painting “The Spirit of ’76” : FIFE
“The Spirit of ’76” is a famous painting by Archibald Willard that used to be called “Yankee Doodle”. It was created in 1875 for the Centennial International Exposition of 1876 held in Philadelphia, which was the first World’s Fair to be held in the US. The painting depicts three soldiers from the Revolutionary War marching in the middle of a battle, two playing drums and one a fife.

61. Where the Joads were driven from : OKLAHOMA
John Steinbeck’s “The Grapes of Wrath” is set during the Great Depression. The novel tells the story of the Joad family from Oklahoma, farmers who had to leave their home and head for California due to economic hardship.

63. Presto or largo : TEMPO
On a musical score, presto is used to indicate a fast tempo. “Presto” is the Italian word for “quick”.

Largo is a instruction to play a piece of music with a very slow tempo. “Largo” is the Italian word for “broadly”.

68. Krupp Works city : ESSEN
The Krupp manufacturing interest originated with Friedrich Krupp who inherited an iron forge that the family owned in the German city of Essen. Friedrich made some not-so-clever investments designed to get the family into the cast steel business. Friedrich died quite young, and his son, Alfred, had to take over the struggling steelworks at only 14 years of age. When he took the helm, the company had five workers. At the time of his death there were about 20,000 employees, and Krupp’s was the world’s largest industrial company.

73. One in knickers : LAD
Back in the early 1900s, young boys would wear short pants in summer and longer “knee pants” in winter. The “knee pants” came to be known as “knickers” or “knickerbockers” in honor of the fictional author Diedrich Knickerbocker who appears in Washington Irving’s “History of New York”. Knickerbocker’s attire included knee-breeches.

Down
1. Noodle dish : RAMEN
Ramen is a noodle dish composed of Chinese-style wheat noodles in a meat or fish broth flavored with soy or miso sauce. Ramen is usually topped with sliced pork and dried seaweed.

9. Buffalo ___ : WING
There are a few stories about how Buffalo wings were first developed, most of them related to the Anchor Bar in Buffalo, New York. If you’re looking for Buffalo wings on a menu in Buffalo, you’ll note that in and around the city they’re just referred to as “wings”.

11. Instrument with sympathetic strings : SITAR
The sitar has been around since the Middle Ages. The sitar is a stringed instrument that is played by plucking, and is used most often in Hindustani classical music. In the West we have been exposed to the instrument largely through the performances of Ravi Shankar and some music by George Harrison of the Beatles, a onetime student of Shankar.

21. Self-proclaimed leader of ISIS, e.g. : CALIPH
“Caliph” is an Arabic word meaning “successor”. In the Islamic tradition, a caliph is a leader who is deemed to be a successor of Muhammad.

ISIS is an extremist Sunni rebel group, with the acronym standing for the Islamic State of Iraq and Syria. Today, ISIS controls territory in Iraq, Syria, Sinai and eastern Libya and has declared it the Islamic State (IS).

24. ___-dieu : PRIE
Prie-dieu literally means “pray (to) God” in French. A prie-dieu is basically a padded kneeler, with an armrest in front and a shelf on which one placed books of prayer.

25. Prosciutto and others : HAMS
Parma is a city in northern Italy, famous for its ham (prosciutto) and cheese (parmesan). Although the word prosciutto is used in Italian to mean ham however it is prepared, in English we use the word to describe the dry-cured ham that is served raw, in thin slices. Apparently, prosciutto can be made out of the meat from the leg of a pig, or from the thigh of a wild horse.

30. Discharge letters? : TNT
TNT is an abbreviation for trinitrotoluene. Trinitrotoluene was first produced in 1863 by the German chemist Joseph Wilbrand, who developed it for use as a yellow dye. TNT is relatively difficult to detonate so it was on the market as a dye for some years before its more explosive properties were discovered.

31. ___ polloi : HOI
“Hoi polloi” is a Greek term, literally meaning “the majority, the many”. In English, “hoi polloi” has come to mean “the masses” and is often used in a derogatory sense.

32. Aardvark’s morsel : ANT
The aardvark is the oddest looking of creatures, a nocturnal burrowing animal that is native to Africa. The name “aardvark” is Afrikaans for “earth pig”, although it is not in fact related to the pig. Aardvarks are noted, among other things, for their unique teeth. Their teeth have no enamel and wear away quite readily, but continuously regrow.

37. Factor in club selection : LIE
On a golf course, the lie of the ball is a factor in which club is selected by a golfer.

38. Canon offering : EOS
In Greek mythology, Eos is the goddess of the dawn who lived at the edge of the ocean. Eos would wake each morning to welcome her brother Helios the sun. The Roman equivalent of Eos is Aurora.

39. Nestlé ___ Caps : SNO
Sno-Caps are a brand of candy usually only available in movie theaters. Sno-caps have been around since the 1920s, would you believe?

41. Stephen of “Citizen X” : REA
Stephen Rea is an Irish actor from Belfast. Rea’s most successful role was Fergus in 1992’s “The Crying Game”, for which performance he was nominated for the Best Actor Oscar. In “The Crying Game”, Fergus was a member of the IRA. In real life, Rea was married to IRA bomber and hunger striker Dolours Price at the time he made the movie.

“Citizen X” is a 1995 TV movie, a crime thriller about a seven-year hunt by Soviet authorities for for a Russian serial killer who murdered 53 women and children. Stars of the film are Stephen Rea, Donald Sutherland and Max von Sydow.

49. ___ dragon (huge lizard) : KOMODO
The large lizard called a Komodo dragon is so named because it is found on the island of Komodo (and others) in Indonesia. It can grow to a length of over 9 1/2 feet, so I guess that explains the dragon part of the name …

53. Czar’s edict : UKASE
The term czar (also tsar) is a Slavic word that was first used as a title by Simeon I of Bulgaria in 913 AD. “Czar” is derived from the word “Caesar”, which was synonymous with “emperor” at that time.

“Family Ties” was one of the first TV shows that I enjoyed when I arrived in the US back in 1983. I found the situation very appealing, with two ex-hippie parents facing off against an ultra-conservative son. The main characters in the show were Michael J. Fox as Alex, Justine Bateman as Alex’s sister Mallory, Meredith Baxter-Birney as Alex’s mom Elyse, and Michael Gross as Alex’s dad Steven. But some future stars had recurring roles as well, including Courteney Cox as one of Alex’s girlfriends and Tom Hanks as Elyse’s younger brother.

55. ___ tag : LASER
The name “Laser Tag” is really a misnomer as lasers are rarely used in the game. The “guns” actually send out infrared light, and not laser light, which is picked up by infrared detectors worn by the players.

57. Tierney of “ER” : MAURA
Maura Tierney is an actress from Boston, Massachusetts. Tierney is best known for playing Lisa Miller on television’s “NewsRadio” and Abby Lockhart on “ER”.