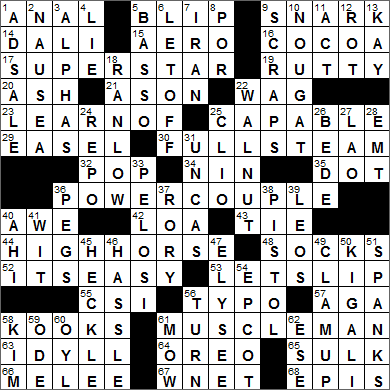 5. Plane, on a radar screen : BLIP
Scientists have been using radio waves to detect the presence of objects since the late 1800s, but it was the demands of WWII that accelerated the practical application of the technology. The British called their system RDF standing for Range and Direction Finding. The system used by the US Navy was called Radio Detection And Ranging, which was shortened to the acronym RADAR.

9. Sarcasm : SNARK
“Snark” is a term that was coined by Lewis Carroll in his fabulous 1876 nonsense poem “The Hunting of the Snark”. Somehow, the term “snarky” came to mean “irritable, short-tempered” in the early 1900s, and from there “snark” became “sarcastic rhetoric” at the beginning of the 21st century.

14. “Swans Reflecting Elephants” painter : DALI
“Swans Reflecting Elephants” is a painting that Salvador Dali completed in 1937. The title is somewhat self-explanatory. The scene features some swans on a lake, along with their reflections. In the reflection the swans take on the appearance of elephants, with the swans’ necks becoming elephant trunks and wings becoming ears.

21. Whom “unto us” is given, in Isaiah : A SON
“Unto us a son is given”, are words from Handel’s “Messiah”. They actually come from the book of Isaiah: “For unto us a Child is born, unto us a Son is given: and the government shall be upon His shoulder: and His name shall be called Wonderful, Counselor, the mighty God, the everlasting Father, the Prince of Peace.”

29. Stand an artist might take : EASEL
The word “easel” comes from an old Dutch word meaning “donkey” would you believe? The idea is that an easel carries its load (an oil painting, say) just as a donkey would carry its load.

34. Novelist Anaïs : NIN
Anaïs Nin was a French author, famous for her journals that she wrote for over sixty years from the age of 11 right up to her death. Nin also wrote highly-regarded erotica and cited D. H. Lawrence as someone from whom she drew inspiration. Nin was married to banker and artist Hugh Parker Guiler in 1923. Decades later in 1955, Nin married former actor Rupert Pole, even though she was still married to Guiler. Nin and Pole had their marriage annulled in 1966, but just for legal reasons, and they continued to live together as husband and wife until Nin passed away in 1977.

35. Half of an umlaut : DOT
An “umlaut” (also “diaeresis”) is a diacritical mark consisting of two horizontal dots placed over a letter, usually a vowel. Here in the West, we are perhaps most familiar with umlauts in German, as in “Schön”.

36. Beyoncé and Jay Z, e.g. … or a hint to 17-, 30-, 44- and 61-Across : POWER COUPLE
Beyoncé Knowles established herself in the entertainment industry as the lead singer with the R&B group Destiny’s Child. She launched her solo singing career in 2003, two years after making her first appearance as an actor. In 2006 she played the lead in the very successful movie adaptation of the Broadway musical “Dreamgirls”. Beyoncé is married to rap star Jay-Z.

42. Hawaii’s Mauna ___ : LOA
Mauna Loa on the “big island” of Hawaii is the largest volcano on the planet (in terms of volume). The name “Mauna Loa” is Hawaiian for “Long Mountain”.

55. CBS forensic series : CSI
The “CSI” franchise of TV shows has been tremendously successful, but seems to be winding down. “CSI: Miami” (the “worst” of the franchise, I think) was cancelled in 2012 after ten seasons. “CSI: NY” (the “best” of the franchise) was cancelled in 2013 after nine seasons. The original “CSI: Crime Scene Investigation”, set in Las Vegas, is still going strong and has been doing so since 2000.

57. ___ Khan : AGA
Aga Khan is a hereditary title of the Imam of a large sect within the Shi’a Muslim faith. The current Aga Khan is Shah Karim al-Hussayni, who has held the position since 1957.

63. Pastoral composition : IDYLL
An “idyll” (also “idyl”) is a short poem with a pastoral theme, usually depicting the scene in romantic and idealized terms. The word comes from the Greek “eidyllion”, which literally translates to “little picture” but was a word describing a short, poem with a rustic theme.

66. Brawl : MELEE
Our word “melee” comes from the French “mêlée”, and in both languages the word means “confused fight”.

67. PBS station behind “Live From Lincoln Center” : WNET
WNET is a television station located in Newark, New Jersey. It is PBS’s station that covers New York City, as well as the rest of the tri-state area.

The Lincoln Center for the Performing Arts takes its name from the neighborhood in which it is situated, Lincoln Square in New York City. .

Down
5. Voice in the role of Mefistofele, e.g. : BASSO
Arrigo Boito was an Italian poet and librettist who completed one opera of his own (“Mefistofele”) and who left one other opera partially complete called “Nerone”. This incomplete opera tells the story of Rome at the time of Emperor Nero. “Nerone” was completed after Boito’s death by a trio of musicians, including Arturo Toscanini, and was premiered at La Scala in 1924, six years after Boito died.

– Armenia and Azerbaijan in the northwest
– Turkmenistan to the northeast
– Afghanistan and Pakistan to the east
– Turkey and Iraq to the west.

10. Candy bar filling : NOUGAT
“Nougat” is an Occitan word (Occitania being a region of Southern Europe) which translates as “nut bread”.

13. ___ Jewelers : KAY
Kay Jewelers is perhaps the most famous store brand owned by Sterling Jewelers. Sterling is the largest fine jewelry chain in the country, with the company’s main competitor being Zale Corporation.

22. Waldorf salad morsel : WALNUT
As one might expect, the Waldorf salad was first created at the Waldorf Hotel in New York City (now the Waldorf-Astoria), back in the 1890s. The classic version of the Waldorf salad is made from apples, celery and walnuts dressed in mayonnaise and served on a bed of lettuce. Anyone who is a fan of the BBC sitcom “Fawlty Towers” will remember how much trouble Basil Fawlty had coming up with a Waldorf salad for an American guest, as the kitchen was “out of Waldorfs” …

25. Muse sometimes pictured with a book or scroll : CLIO
In Greek mythology, the muses are the goddesses who inspire the creation of literature and the arts. The number of muses is a subject of debate at times, but the most popular view is that there are nine:

26. “Venerable” scholar of old England : BEDE
The Venerable Bede was a monk in the north of England in the first century AD. Saint Bede is mainly known as an author and scholar, publisher of “The Ecclesiastical History of the English People”.

27. Vientiane native : LAO
Vientiane is the capital city of Laos, situated on the famous Mekong River. The city was originally called the “city of sandalwood” by Buddhist monks, naming after the valued trees that grew in the area. The French took the Pali words for “city of sandalwood” and rewrote it as the French-sounding “Vientiane”.

33. First female speaker of the House : PELOSI
Nancy Pelosi is a former Speaker of the House, the 60th person to hold that position. Ms. Pelosi represents a district not far from here, which covers most of San Francisco. She is the first Californian, the first Italian-American and the first woman to be Speaker of the House. As Speaker, she was also second in line, after the Vice President, to take over if President Obama could not finish his term. That made Nancy Pelosi the highest-ranking female politician in US history.

36. Cribbage score keepers : PEGS
Cribbage is a great card game that originated in 17th-century England, a creation of the poet Sir John Suckling. One of the unique features of the game is that a cribbage board is used to keep score. Here in the US, cribbage is very much associated with the submarine service, as it is a favorite game of submariners of all ranks.

37. Actor Calhoun : RORY
Rory Calhoun was a film and TV actor from Los Angeles. Calhoun really carved out a nice career for himself after a very ignominious start in life. Calhoun served three years in federal prison for robbing jewelry stores and cars while in this teens.

39. Many August births : LEOS
Leo is the fifth astrological sign of the Zodiac. People born from July 13 to August 23 are Leos.

41. Tina Fey display : WIT
Comic actress Tina Fey has a scar on her face a few inches long on her left cheek, which I was shocked to learn was caused by a childhood “slashing” incident. When she was just five years old and playing in the front yard of her house, someone just came up to her and slashed her with a knife. How despicable!

50. Capital of Rwanda : KIGALI
Kigali was chosen as the capital city of Rwanda when the nation was granted independence from Belgium in 1962. Kigali was the center of the Rwandan Genocide of 1994, in which half a million to one million Rwandans were killed, perhaps 20% of the country’s total population in the space of four months.

54. Florida tourist attraction : EPCOT
EPCOT Center (now just called Epcot) is the theme park beside Walt Disney World in Florida. EPCOT is an acronym for Experimental Prototype Community of Tomorrow, and is a representation of the future as envisioned by Walt Disney. Walt Disney actually wanted to build a living community for 20,000 residents at EPCOT, but he passed away before that vision could be realized.

60. Olive of the comics : OYL
“Thimble Theater” was the precursor comic strip to the famous “Popeye” drawn by E. C. Segar. Before Popeye came into the story, the brother and sister characters Castor Oyl and Olive Oyl were the main protagonists. And then along comes a sailor …

62. Ending for Nepal : -ESE
Nepal lies to the northeast of India. Today, the state is known as the Federal Democratic Republic of Nepal. In 2008, the Communist Party of Nepal won the country’s general election. Soon after, the Assembly voted to change the form of government, moving away from a monarchy and creating a secular republic.