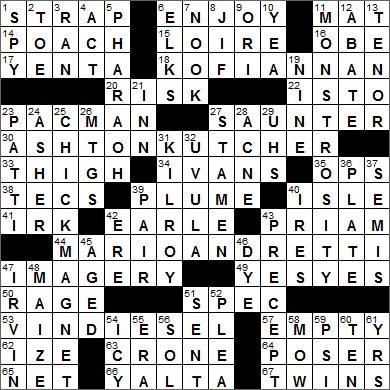 CROSSWORD SETTER: Tom McCoy
THEME: Twins … each of today’s themed answers is the name of a celebrity, who happens to have been born a TWIN:

Today’s Wiki-est, Amazonian Googlies
Across
15. France’s longest river : LOIRE
The Loire is the longest river in France. It is so long that it drains one-fifth of the nation’s land mass. The Loire rises in the southeast, in the Cevennes mountain range, then heads north and then due west, emptying into the Bay of Biscay at the city of Nantes.

16. Award bestowed by a queen: Abbr. : OBE
The Most Excellent Order of the British Empire is an order of chivalry in the UK that was established in 1917 by King George V. There are five classes within the order, which are in descending seniority:

18. Ban Ki-moon’s predecessor at the U.N. : KOFI ANNAN
The diplomat Kofi Annan had a twin sister
Kofi Annan is a diplomat from Ghana who served as General Secretary of the UN for ten years until the beginning of 2007. Annan was born into an aristocratic family, and had a twin sister named Efua Atta. Efua and Kofi shared the middle name “Atta”, which means “twin” in the Akan language of Ghana. Annan attended the MIT Sloan School of Management from 1971-72, and graduated with a Master of Science degree.

23. Classic video game with ghosts : PAC-MAN
The Pac-Man arcade game was first released in Japan in 1980, and is as popular today as it ever was. The game features characters that are maneuvered around the screen to eat up dots and earn points. The name comes from the Japanese folk hero “Paku”, known for his voracious appetite. The spin-off game called Ms. Pac-Man was released in 1981.

30. “Two and a Half Men” co-star starting in 2011 : ASHTON KUTCHER
The actor Ashton Kutcher was born in Cedar Rapids, Iowa. He has a fraternal twin named Michael who needed a heart transplant when the brothers were quite young. Ashton played the character Michael Kelso on Fox’s “That ‘70s Show”. Kelso was Kutcher’s breakthrough acting role. Kutcher is now appearing on the sitcom “Two and a Half Men”, having replaced the “disgraced” Charlie Sheen. In 2009, Kutcher became the first user on Twitter to get over 1 million followers. I wasn’t one of them …

33. Femur’s locale : THIGH
The thigh bone, the femur, is the longest and the largest bone in the human body.

34. Two Romanov czars : IVANS
Peter I and Ivan V were half-brothers who serves as joint Tsars of Russia between the years 1682 and 1696. Peter was the most influential of the duo by far. After Ivan died, Peter went on to bring Russia into a new age, earning himself the moniker Peter the Great.

Ivan VI of Russia was emperor from 1740 to 1741 and had a relatively short and troubled life. He was proclaimed Emperor of Russia when he was just a few months old, and was overthrown in less than a year resulting him spending the rest of his life as a prisoner. Ivan was treated quite brutally at times, and eventually was killed by his guard when he was 23 years old.

38. Gumshoes, in old crime fiction : TECS
“Gumshoe” is a slang term for a private detective or private investigator (P.I.). Apparently the term “gumshoe” dates back to the early 1900s, and refers to the rubber-soled shoes popular with private detectives at that time.

39. Grand feather : PLUME
A “plume” is a feather, as in one’s cap. The term comes into English via French from the Latin “pluma” meaning “feather”.

40. ___ of Capri : ISLE
The island of Capri off the coast of Southern Italy has been a tourist resort since the days of ancient Rome. Capri is home to the famous Blue Grotto, a sea cave that is illuminated with sunlight that’s colored blue as it passes through the seawater into the cave. Natives of Capri are known as “Capriotes”.

42. Country singer Steve : EARLE
Steve Earle is an American songwriter and performer, with a reputation as a man who has lived a hard life. Earle’s brushes with the law and drug addiction problems have earned him the nickname “the hardcore troubadour”.

44. Sporting champion with a drive for success? : MARIO ANDRETTI
Mario Andretti is a retired Italian American racing driver who was named US Driver of the Year in 1967, 1978 and 1984. Both of Mario’s sons, Michael and Jeff are successful auto racers, as well as Mario’s nephews, John and Adam Andretti. John and Adam are sons of Mario’s brother Aldo Andretti. Aldo also raced cars, but quit after a crash in 1969 that severely damaged his face. Aldo is Mario’s identical twin brother, but there is no resemblance after the reconstructive surgery necessitated by the accident.

53. “The Fast and the Furious” co-star : VIN DIESEL
Vin Diesel is the stage name of actor Mark Sinclair Vincent. He was born in New York City with his twin brother Paul. The twins never knew their father, and their mother is an astrologer. Vincent was given the nickname of “Diesel” by his friends early in his life, as he was said to have a bottomless supply of energy.

66. Crimean conference site : YALTA
The Yalta Conference was a wartime meeting between WWII leaders Franklin D. Roosevelt, Winston Churchill and Joseph Stalin. Held in February of 1945, the conference is most remembered for decisions made on the post-war organization of Europe. To a large extent, the three leaders made decisions carving up influence around the world that has had implications to this day.

Down
1. James Bond, for one : SPY
James Bond is the creation of the writer Ian Fleming. Fleming “stole” the James Bond name from an American ornithologist. The number 007 was “stolen” from the real-life, 16th century English spy called John Dee. Dee would sign his reports to Queen Elizabeth I with a stylized “007” to indicate that the reports were for “her eyes only”.

6. ___ Club (civic group) : ELKS
The Benevolent and Protective Order of Elks (BPOE) was founded in 1868, and is a social club that has about a million members today. It started out as a group of men getting together in a “club” in order to get around the legal opening hours of taverns in New York City. The club took on a new role as it started to look out for poor families of members who passed away.

7. Reading place … or reading device : NOOK
The Barnes & Noble electronic-book reader is called the Nook. The Nook accounts for 10-15% of electronic book readers in the world.

8. Competitor of Skippy and Peter Pan : JIF
Jif is the leading brand of peanut butter in the US, and has been since 1981. Introduced in 1958, it is now produced by Smuckers.

13. Kind of sax : TENOR
The saxophone was invented by Belgian Adolphe Sax. Sax developed lip cancer at one point in his life, and one has to wonder if his affliction was related to his saxophone playing (I am sure not!). I had the privilege of visiting Sax’s grave in the Cemetery of Montmartre in Paris a few years ago.

19. Number of heads of the Hydra, in myth : NINE
The Lernaean Hydra was a mythical sea snake that had multiple heads. Heracles had to slay the Hydra of Lerna as the second of his Twelve Labors.

23. Rocker Smith : PATTI
Patti Smith is a singer-songwriter who was a big player in the seventies punk rock movement in New York City. Smith’s most successful song is “Because the Night”, a song co-written with Bruce Springsteen and recorded by Smith in 1978. Her influence in the punk rock scene earned Smith the nickname “Godmother of Punk”.

24. “My Name Is ___ Lev” : ASHER
“My Name Is Asher Lev” is a novel by Rabbi Chaim Potok, first published in 1972. The story follows the experiences of Asher Lev, a Hasidic Jewish boy in New York City. His story continues in the sequel “The Gift of Asher Lev”.

31. “___ was here” (W.W. II catchphrase) : KILROY
The omnipresent doodle and graffiti “Kilroy was here” dates back to WWII, although the exact origins are in doubt. A similar character exists in other countries, with a different name. In Australia, “Foo was here” and in Britain “Chad was here”. It’s felt that Chad might have been the original, and he probably pre-dated the Second World War.

32. Throat dangler : UVULA
The uvula is that conical fleshy projection hanging down at the back of the soft palate. The uvula plays an important role in human speech, particularly in the making of “guttural” sounds. The Latin word for “grape” is “uva”, so “uvula” is a “little grape”.

47. Football Hall-of-Famer Michael : IRVIN
Michael Irvin played football for the Dallas Cowboys. I don’t follow American Football (forgive me!) but did see Irvin on “Dancing with the Stars” on television, and he acquitted himself quite well.

59. Trident-shaped letter : PSI
The Greek letter psi is the one that looks a bit like a trident or a pitchfork.

61. Soph. and jr. : YRS
The term “sophomore” has been used for a student in the second year of university since the 1680’s. The original meaning of the word was “arguer”. The term has Greek roots, from two Greek words that have been artificially combined in English. The Greek “sophos” means “wise”, and “moros” means “foolish”.