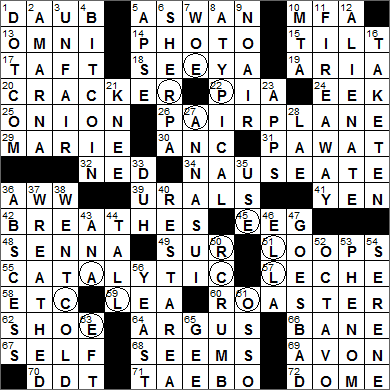 CROSSWORD SETTER: Jason Flinn
THEME: Loopy Loops … each of today’s themed answers make loops, and a few letters in each themed answer take a “loop” in the puzzle. The “loopy” letters are circled in the grid:

51A. What the paths of three answers in this puzzle include : LOOPS

26A. Classroom projectile : PAPER AIRPLANE
60A. Theme park part : ROLLER COASTER
62A. It may be on the tip of the tongue : SHOELACE

Today’s Wiki-est, Amazonian Googlies
Across
5. City that supplied granite for Egyptian monuments : ASWAN
The Egyptian city of Aswan lies in the south of the country, on the River Nile. Aswan is famous for its stone quarries, going back to ancient times. The most celebrated granite rock from the area is called syenite. Stone from Aswan was shipped northwards along the Nile and used in the construction of the pyramids.

13. Hyatt alternative : OMNI
Omni Hotels & Resorts is headquartered in Irvine, California and has properties in the US, Canada and Mexico.

The Hyatt hotel chain takes its name from the first hotel in the group, that was purchased in 1957 i.e. Hyatt House at Los Angeles International Airport. Among other things, Hyatt is famous for designing the world’s first atrium hotel, the Hyatt Regency in Atlanta.

15. Illegal motion penalty? : TILT
In a game of pinball, some players get an irresistible urge to “nudge” the machine . Such a nudge, a movement of the machine designed to influence the path taken by the ball, is called a “tilt”. Most pinball machines have sensors designed to detect a tilt, and when activated a “tilt” warning light comes on and the player’s controls are temporarily disabled.

17. Former Washington heavyweight : TAFT
William Howard Taft may have been the 27th President of the United States, but his lifelong ambition was to be Chief Justice of the Supreme Court. President Taft was able to realize that dream in 1921, eight years after losing his bid for re-election as president. As Chief Justice, this former US President swore in two new presidents: Calvin Coolidge (in 1925) and Herbert Hoover (in 1929). William Howard Taft is also remembered as the most obese president. In the last year of his presidency, he weighed about 340 pounds (he was 5 feet 11 inches tall). Twelve months after leaving the White House, President Taft had dropped 80 pounds and substantially lowered his blood pressure.

20. Hors d’oeuvre staple : CRACKER
An hors d’oeuvre is the first course in a meal. “Hors d’oeuvre” translates from French as “apart from the work”, really meaning “not the main course”.

22. ___ mater (brain part) : PIA
“Pia mater” is Latin, and means “tender mother”. It is the name given to the mesh-like envelope that surrounds the brain and spinal cord. The pia mater brings blood to some of the exterior parts of the brain, and provides physical support for larger blood vessels passing over the brain’s surface.

29. Lisa ___ Presley : MARIE
Lisa Marie Presley is the only daughter of Elvis and Priscilla Presley, and the sole heir to her father’s estate. Lisa Marie has been married four time, including to Michael Jackson and Nicolas Cage.

32. “Game of Thrones” patriarch ___ Stark : NED
Ned Stark is the protagonist in George R. R. Martin’s fantasy novel “A Game of Thrones”, although his character doesn’t exactly come out on top by the end of the story. Stark is played by actor Sean Bean in the HBO television adaptation of the novel.

39. European border : URALS
The eastern side of the Ural Mountains in Russia is generally regarded as the natural divide between the continents of Europe and Asia.

41. Thirst : YEN
The word “yen”, meaning “urge”, has been around in English since the very early 1900s. It comes from the earlier word “yin” imported from Chinese, which was used in English to describe an intense craving for opium!

45. E.R. test : EEG
An electroencephalogram (EEG) is a record of electrical activity caused by the firing of neurons within the brain. The EEG might be used to diagnose epilepsy, or perhaps to determine if a patient is “brain dead”.

48. Plant used in herbal remedies : SENNA
Sennas are used as purgatives and laxatives.

55. ___ converter : CATALYTIC
Automakers introduced catalytic converters in 1975 in response to clean-air laws. These devices don’t do anything for the carbon dioxide that is a major byproduct of fuel combustion, and a contributor to global warming. The converter does reduce levels of carbon monoxide, volatile organic compounds, and oxides of nitrogen. Automotive engines with catalytic converters are now almost 100 times cleaner than lawnmower engines in terms of smog-forming emissions.

64. 100-eyed giant of myth : ARGUS
Argus Panoptes is a monster of Greek mythology. “Panoptes” means “all-seeing”, so over time Argus has been described as having many, many eyes. Argus was noted for being alert, always keeping some eyes open when sleeping. This characteristic led to Argus being used for a vigilant person, and has been adopted as the name for many newspapers. After Argus died, Hera transferred his eyes to the tail of the peacock.

66. Plague : BANE
Today we tend to use the word “bane” to mean anathema, a source of persistent annoyance. A few centuries ago, a bane was a cause of harm or death, perhaps a deadly poison.

69. River through Bristol : AVON
The River Avon that flows in the southwest of England is sometimes referred to as the Lower Avon or Bristol Avon. The extra wording is to distinguish it from a number of other River Avons in the country, including the famous one through William Shakespeare’s Stratford. The Lower Avon passes through the cities of Bristol and Bath.

Bristol is the most populous city in the southwest of England. Bristol is a port city, one that had an important role in growth of slavery in America. Manufactured goods from the UK were shipped from Bristol to West Africa where they were traded for Africans who were forcibly transported across the Atlantic for trade in the Americas. The slave ships brought back plantation goods to Bristol.

70. “Silent Spring” topic, for short : DDT
DDT is dichlorodiphenyltrichloroethane (don’t forget now!). DDT was used with great success to control disease-carrying insects during WWII, and when made available for use after the war it became by far the most popular pesticide. And then Rachel Carson published her famous book “Silent Spring”, suggesting there was a link between DDT and diminishing populations of certain wildlife. It was the public outcry sparked by the book, and reports of links between DDT and cancer, that led to the ban on the use of the chemical in 1972. That ban is touted as the main reason that the bald eagle was rescued from near extinction.

71. Exercise option : TAE BO
Tae Bo isn’t an ancient martial art, and rather was developed as a form of aerobic exercise in the 1990s. The discipline was introduced by taekwondo expert Billy Blanks who gave it the name Tae Bo, a melding of “taekwondo” and “boxing”.

Down
1. Kind of bubble : DOT-COM
The “dot-com bubble” was a phenomenon seen in 1997 to 2000 during which speculation led to the overvaluation of poorly understood Internet stocks. The bubble “burst” in effect, on March 10, 2000. Within ten days the value of the NASDAQ was down by over 10%.

2. Archaeological site along the Nile : AMARNA
Armana is an archaeological site on the east bank of the Nile River in Egypt, almost 200 miles south of Cairo. The ancient city is also known as el-Armana, and Tel el-Armana, although the use of “Tel” is apparently incorrect. “Tel” commonly appears in names in the region (Arabic for “hill”), but should not apply to Amarna as the site is perfectly flat.

4. Digital currency : BITCOIN
Bitcoins are digital units of currency that are used on some Internet sites. Bitcoins are the most popular alternative currency used on the Web today. More and more reputable online retailers are accepting bitcoins, including Overstock.com, Expedia, Dell and Microsoft.

5. Vaulted recess : APSE
The apse of a church or cathedral is a semicircular recess in an outer wall, usually with a half-dome as a roof and often where there resides an altar. Originally apses were used as burial places for the clergy and also for storage of important relics.

6. Worker in peak physical condition? : SHERPA
In the Tibetan language, Sherpa means “eastern people” (sher = east, pa = people). Sherpas are an ethnic group from Nepal, but the name is also used for the local guides who assist mountaineers in the Himalayas, and particularly on Mount Everest.

28. Pacific port from which Amelia Earhart left on her last and fatal flight : LAE
Lae is the second largest city in Papua New-Guinea (after the capital, Port Moresby). It was from the airport at Lae that Amelia Earhart departed in 1937, never to be seen again.

43. Santa ___, Calif. : ANA
Santa Ana is the county seat of Orange County, California and takes its name from the Santa Ana River that runs through the city.

46. Actress Raines of “Phantom Lady” : ELLA
Ella Raines was a Hollywood film and television actress who was at the height of her career in the early 1940s.

“Phantom Lady” is a 1944 film noir that was an adaptation of a novel with the same name by Cornell Woolrich.

50. “Keep on Truckin'” cartoonist : R CRUMB
Robert Crumb is the cartoonist who created the character Fritz the Cat.

52. Book size : OCTAVO
Some common book formats/sizes are folio, octavo and quarto. For an octavo book, sixteen pages of text are printed, eight pages on each side of a “full-size” piece of paper. The pages are formed by folding the sheet of paper three times in half, giving a group of sixteen pages printed on eight leaves (after separation). The size of the resulting pages of course depends on the size of the original sheet, but each page is one eighth the size of that original (hence the name octavo). Nowadays the octavo size refers to books that are between eight and ten inches tall.

63. Pond dweller : EFT
Newts wouldn’t be my favorite animals. They are found all over the world living on land or in water depending on the species, but always associated with water even if it is only for breeding. Newts metamorphose through three distinct developmental stages during their lives. They start off as larvae in water, fertilized eggs that often cling to aquatic plants. The eggs hatch into tadpoles, the first developmental form of the newt. After living some months as tadpoles swimming around in the water, they undergo another metamorphosis, sprouting legs and replacing their external gills with lungs. At this juvenile stage they are known as efts, and leave the water to live on land. A more gradual transition takes place then, as the eft takes on the lizard-like appearance of the adult newt.