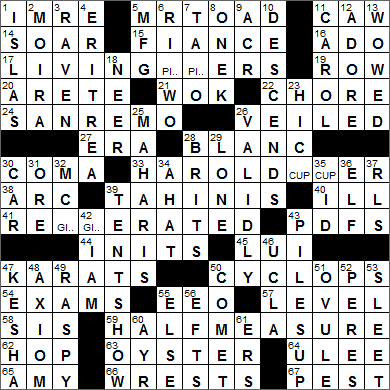 59A. Inadequate effort … or the contents of six squares in this puzzle? : HALF MEASURE

Today’s Wiki-est, Amazonian Googlies
Across
1. Nobel-winning novelist ___ Kertész : IMRE
Imre Kertész is a Hungarian author. Kertész is of Jewish descent and is a survivor of the Auschwitz and Buchenwald concentration camps. He won the Nobel Prize in Literature in 2002.

16. Kerfuffle : ADO
“Kerfuffle” comes from the Scottish “curfuffle”, with both words meaning “disruption”.

17. Place for a bed and dresser : LIVING QUARTERS (PINT+PINT = QUART)
Two pints make up a quart, which is a “quarter” of a gallon, hence the name.

21. What may have quite a stir? : WOK
“Wok” is a Cantonese word, the name for the frying pan now used in many Asian cuisines.

24. City on the Italian Riviera : SAN REMO
The Italian city of San Remo sits on the Mediterranean, right on the border with France. In Italian the city is named Sanremo, just one word, although the spelling of “San Remo” dates back to ancient times.

30. Bad state to be in : COMA
The term “coma” comes from the Greek word “koma” meaning “deep sleep”.

33. 2005 Nobel-winning playwright : HAROLD PINTER (CUP+CUP = PINT)
Harold Pinter was a playwright and screenwriter from London, England. Pinter was awarded the Nobel Prize for Literature in 2005. One of Pinter’s more famous screenplays is his 1981 film adaptation of the John Fowles novel “The French Lieutenant’s Woman”.

A US pint is made from 16 fluid ounces, and an imperial pint is 20 fluid ounces. The term “pint” comes into English via Old French, ultimately from the Latin “picta” meaning “painted”. The name arose from a line painted on the side of a beer glass, marking a full measure of ale.

39. Sesame seed pastes : TAHINIS
“Tahini” is the Arabic name for the paste made from ground sesame seeds. Tahini is a major ingredient in hummus, one of my favorite dishes.

41. Got well : RECUPERATED (GILL+GILL = CUP)
A gill is a unit of volume really only used these for measuring out alcoholic spirits. A gill is one quarter of pint, so a US gill is 4 fluid ounces, and an imperial gill is 5 fluid ounces.

43. Acrobat displays? : PDFS
Adobe Acrobat is the software used to create .pdf files. Most of us are more familiar with the associated application called Adobe Reader, because that’s what we use to read those .pdf files.

50. One outsmarted by Odysseus : CYCLOPS
According to Greek mythology, Odysseus and some of his men were trapped in a cave by the great Cyclops Polyphemus. The prisoners managed to drive a pole into Polyphemus’s eye, blinding him. The cyclops screamed, “Who has done this to me?” Odysseus replied, “I am Noman, and Noman has done this to you!” As the men finally make their escape, Odysseus shouts back to Polyphemus, “I am not Noman, but Odysseus, ruler of Ithaca. Tell everyone that I, Odysseus, blinded the mighty Polyphemus!”

55. Job listing abbr. : EEO
Equal Employment Opportunity (EEO) is a term that has been around since 1964 when the Equal Employment Commission was set up by the Civil Rights Act.

64. 1997 Peter Fonda title role : ULEE
“Ulee’s Gold” is a highly respected film from 1997 in which Peter Fonda plays the title role of Ulee. Ulee’s “gold” is the honey that Ulee produces. It is a favorite role for Peter Fonda and he has shared that playing Ulee brought to mind his father Henry Fonda, who himself kept a couple of hives. So if you see Peter Fonda in “Ulee’s Gold” you’re witnessing some characteristics that Peter saw in his father.

65. Adams of “Big Eyes” : AMY
Amy Adams is an American actress. although she was actually born in Vicenza, Italy while her father was a US serviceman stationed on an Italian base. My favorite Amy Adams film so far is the outstanding “Julie & Julia” in which she acted alongside Meryl Streep. I highly recommend this truly delightful movie.

“Big Eyes” is a 2014 movie about the artist Margaret Keane (played by Amy Adams). Margaret’s husband Walter Keane (played by Christoph Waltz) fraudulently claimed that it was him who actually created the paintings. The title “Big Eyes” refers to the exaggerated size of the eyes of the subjects in Keane’s paintings.

66. Forcibly removes : WRESTS
The verb “to wrest” can mean to obtain by violent twisting and pulling. The word “wrest” derives from the Middle English “wresten” meaning “to twist”. Our word “wrestling” has the same etymology.

Down
1. ___ Marías (Mexican penal colony) : ISLAS
The Islas Marías Federal Penal Colony is a prison operated by the Mexican government. It is located on the largest of the Islas Marías in the Pacific Ocean off the state of Nayarit. The facility opened in 1905, and was slated for closure in recent years. However, the prison was reactivated in response to overcrowding in other penitentiaries.

2. Actress Kelly : MOIRA
Moira Kelly is an actress from Queens, New York. Kelly provided the voice for the female lion cub Nala in “The Lion King” and its sequel. I mostly remember her for playing a White House media consultant in the first series of the wonderful TV drama “The West Wing”.

Eritrea is a country located in the Horn of Africa, surrounded by Sudan, Ethiopia, Djibouti and the Red Sea. Some scientists believe that the area now known as Eritrea was the departure point for the anatomically modern humans who first left Africa to populate the rest of the world.

11. “Here We Come a-Wassailing,” for one : CAROL
“Wassail” is ale or mulled wine used for toasting at festivals, especially Christmas. The term “wassail” comes from Old Norse “ves heill” meaning “be healthy”. The term can also be used to describe a Christmas carol that is sung while “wassailing”, drinking wassail during the December festival.

18. “A fuller blast ___ shook our battlements”: “Othello” : NE’ER
Shakespeare’s “Othello” was first performed in 1604. The main characters in the play are:

25. George of “Route 66” : MAHARIS
The actor George Maharis played Buz Murdock, one of the three main actors in the television series “Route 66”.

“Route 66” is a classic television show from the early sixties about two young men traveling across the US in a Corvette. The original lead characters were Tod Stiles and Buz Murdock, with Murdock being replaced by a character called Lincoln Case in the third season.

31. Part of a krone : ORE
The Norwegian and Danish krone are divided into 100 öres.

32. Montreal university : MCGILL
McGill University is a school in Montreal that was founded in 1821. The university was formed from the preexisting McGill College that had been established using a grant from Montreal merchant James McGill.

36. Middle-earth inhabitant : ELF
Middle-earth is the setting for J. R. R. Tolkien’s fantasy novels “The Hobbit” and “The Lord of the Rings” series.

42. Funny Terry : GILLIAM
Terry Gilliam is a former member of the famous British Monty Python comedy troupe. Gilliam was the only American in the group, and he was the person responsible for the animations featured in “Monty Python’s Flying Circus”.

50. Brand once pitched by Josephine the Plumber : COMET
The Comet brand of household cleanser produced a famous series of ads in the sixties through the eighties that featured a character known as “Josephine the Plumber”. Played by actress Jane Withers, she was noted for uttering the line “Nothing can hold a can to Comet!”

52. Tel Aviv’s ___ Center for Peace : PERES
Shimon Peres is an Israeli statesman who was born in Poland. A former prime minister, Peres also served as the President of the State of Israel from 2007 until 2014. Born Szymon Perski in Poland, Peres was the oldest head of state in the world.

53. Wintry mix : SLEET
Apparently “sleet” is a term used to describe two weather conditions. One is a shower of ice pellets, smaller than hail, and the second is a mixture of rain and snow, with the snow melting as it falls. It’s the second definition that I have always used …

56. Tiny amphibians : EFTS
Newts wouldn’t be my favorite animals. They are found all over the world living on land or in water depending on the species, but always associated with water even if it is only for breeding. Newts metamorphose through three distinct developmental stages during their lives. They start off as larvae in water, fertilized eggs that often cling to aquatic plants. The eggs hatch into tadpoles, the first developmental form of the newt. After living some months as tadpoles swimming around in the water, they undergo another metamorphosis, sprouting legs and replacing their external gills with lungs. At this juvenile stage they are known as efts, and leave the water to live on land. A more gradual transition takes place then, as the eft takes on the lizard-like appearance of the adult newt.