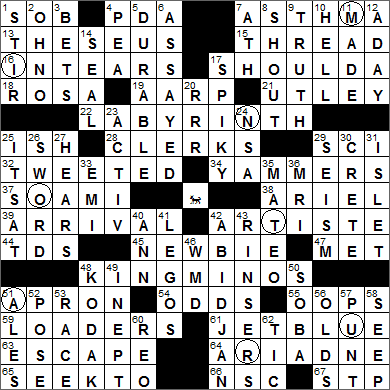 CROSSWORD SETTER: Greg Johnson
THEME: Minotaur … we have a note with today’s puzzle:

When this puzzle is done, the circled letters, reading from top to bottom, will spell something that belongs in the center square.

The circled letters spell out the word MINOTAUR, which I have depicted with a tiny symbol in the center of my grid. There are several MINOTAUR-themed answers throughout the puzzle:

13. Maze runner? THESEUS
15. Item used by 13-Across to navigate the 22-Across THREAD
In the famous tale from Greek mythology, Theseus unwound a “clew” as he went into the Labyrinth to battle with the Minotaur. A clew is a ball of thread or yarn. After slaying the monster, Theseus found his way out of the maze by following the thread. It is this use of a “clew” as “something to point the way” that gives us our modern term “clue”. The original spelling of “clew” was often used in murder mysteries written by British authors.

18. Pink-colored, to Pedro ROSA
In Spanish, one color is pink (rosa).

19. Org. for seniors AARP
AARP is now the official name for the interest group that used to be called the American Association of Retired Persons. The name change reflects the current focus of the group on all Americans aged 50 or over, as opposed to just people who have retired.

22. Home of the [circled letters] LABYRINTH
The mythical labyrinth that was home to the Minotaur was built by Daedalus, a master craftsman engaged by King Minos. After the Labyrinth was completed, King Minos imprisoned Daedalus and his son Icarus in a tower, so that he could not spread word of his work. Daedalus fabricated wings so that he and Icarus could escape by flying off the island. Despite being warned by his father, Icarus flew too close to the sun so that the wax holding the wings’ feathers in place melted. Icarus drowned in the sea, and Daedalus escaped.

32. Like some breaking news, nowadays TWEETED
I have never tweeted in my life, but am coming to realise that I need to think about it. Twitter is a microblogging service that limits any post sent to just 140 characters. In a sense, it is similar to this blog. Here I send out a post once a day containing information that I think might be useful to folks (thank you for reading!). I have to work out what would be of interest that I could publish in 140 characters or less.

38. Sharon of Israel ARIEL
Ariel Sharon was a former Prime Minister of Israel. While still in office in 2005, Sharon suffered two debilitating strokes that left him in a permanent vegetative state from early 2006, until he finally passed away in early 2014.

44. QB’s goals TDS
In football, the goal of the quarterback (QB) is to score touchdowns (TDs).

48. Ruler of 30-Down KING MINOS
Minos was the King of Crete in Greek mythology, and the son of Zeus and Europa. Minos had an elaborate labyrinth built in Crete, designed by the architect Daedalus and his son Icarus (who famously died trying to escape from the island by “flying” away). In the labyrinth, King Minos kept the Minotaur, a dreadful creature with the head of a bull on the body of a man.

61. JFK-based carrier JETBLUE
jetBlue is a low-cost airline that is mainly based at John F. Kennedy International Airport in New York. The airline was founded by former Southwest Airline executives in 1999 as NewAir. The approach taken by jetBlue was to model itself on Southwest in terms of cost control, but to add amenities that made low-cost air travel more enjoyable.

64. Daughter of 48-Across who helped 13-Across ARIADNE
In Greek mythology, Ariadne was the daughter of Minos, the King of Crete and master of the Minotaur. Minos charged his daughter with control of the labyrinth that housed the Minotaur. However, Ariadne fell in love with Theseus who had vowed to kill the Minotaur, and she helped him fulfill his mission.

66. White House advisory grp. NSC
The National Security Council (NSC) was created by President Harry S. Truman in 1947. The NSC is chaired by the sitting president and meets in the White House Situation Room.

Down
1. Kool-Aid packet direction STIR
The drink we know today as Kool-Aid was invented by Edward Perkins and his wife, in Perkins’ mother’s kitchen in southwest Nebraska. Kool-Aid is now the Official Soft Drink of the state.

3. They’re placed in Vegas BETS
Back in the 1800s, the Las Vegas Valley was given its name from the extensive meadows (“las vegas” is Spanish for “the meadows”) present in the area courtesy of the artesian wells drilled by local farmers. Las Vegas was incorporated as a city in 1905, in the days when it was a stopping-off point for pioneers travelling west. It eventually became a railroad town, although with the coming of the railroad growth halted as travelers began to bypass Las Vegas. The city’s tourism industry took off in 1935 with the completion of the nearby Hoover Dam, which is still a popular attraction. Then gambling was legalized, and things really started to move. Vegas was picked, largely by celebrated figures in “the mob”, as a convenient location across the California/Nevada state line that could service the vast population of Los Angeles. As a result, Las Vegas is the most populous US city founded in the 20th century (Chicago is the most populous city founded in the 19th century, just in case you were wondering).

12. Old TV’s “Queen for ___” A DAY
“Queen for a Day” was a game show that ran on the radio from 1947 until 1957, and on television from 1956 to 1964. The show involved the interviewing of a panel of candidates for “Queen”. The winner of the title was then dressed in elaborate robes and given a host of expensive prizes.

23. End of Arthur Miller’s “The Crucible,” e.g. ACT IV
“The Crucible” is a 1952 play by Arthur Miller that tells the story of the Salem witch trials. Miller wrote it as an allegory for the House Committee on Un-American Activities hearings that were being chaired by Senator Joe McCarthy around that time. Miller was called before the Committee himself, and was convicted of contempt of Congress for refusing to “name names”.

30. Home of the [circled letters] CRETE
Crete is the largest of the Greek Islands. Crete figures heavily in Greek mythology. Zeus was born in a cave at Mount Ida, the highest peak on the island. Crete was also home to the Labyrinth where the Minotaur was slain by Theseus. Icarus and Daedalus, after having crafted the Labyrinth, escaped from the island using wings that they crafted.

33. U.K. record label EMI
EMI was a British music company, with the acronym originally standing for Electric and Musical Industries.

35. San ___ MATEO
San Mateo is a city located south of San Francisco, just across the other side of the Bay from where I live. San Mateo is Spanish for Saint Matthew.

36. Hosp. scan MRI
A CT (or “CAT”) scan produces (via computer manipulation) a three dimensional image of the inside of an object, usually the human body. It does so by taking a series of two dimensional x-ray images while rotating the camera around the patient. The issue with CT scans is that they use x-rays, and high doses of radiation can be harmful causing damage that is cumulative over time. An MRI on the other hand (Magnetic Resonance Imaging), uses powerful magnetic fields to generate its images so there is no exposure to ionizing radiation (such as X-rays). We used MRI equipment in our chemistry labs at school, way back in the days when the technology was still called Nuclear Magnetic Resonance Imaging (NMRI). Apparently the marketing folks didn’t like the term “nuclear” because of its association with atomic bombs, so now it’s just called MRI.

41. They stick together in the playroom LEGOS
Lego is manufactured by Lego Group, a privately held company headquartered in Billund, Denmark. The company was founded by a carpenter called Ole Kirk Christiansen in 1934 and the now-famous plastic interlocking blocks were introduced in 1949. The blocks were originally sold under the name “Automatic Binding Bricks” but I think “Lego” is easier to remember! The name “Lego” comes from the Danish term “leg godt” meaning “play well”.

42. Third-largest French-speaking city in the world [hint: it’s in Ivory Coast] ABIDJAN
Abidjan is a city on the coast of the West African nation of Ivory Coast. The urban area that includes the city is home to almost 13 million people. That makes it the third-largest French-speaking urban agglomeration in the world, after Paris and Kinshasa (in Congo).

46. Iraq war subj. WMD
The first recorded use of the term “Weapon of Mass Destruction” (WMD) was in 1937. The words were used by Cosmo Gordon Lang, the Archbishop of Canterbury at the time, in reference to the bombardment of Guernica in Spain during the Spanish Civil War by the German Luftwaffe. He said, “Who can think without horror of what another widespread war would mean, waged as it would be with all the new weapons of mass destruction?”

48. Big name in the film industry KODAK
George Eastman founded the Eastman Kodak Company, named after the Kodak camera that he had invented four years earlier. He came up with the name of Kodak after careful consideration. Firstly he was a big fan of the letter “K”, calling it “strong, incisive”. He also wanted a word that was short, easy to pronounce and difficult to mispronounce, and a word that was clearly unique with no prior associations. “Kodak” fit the bill.

50. Japanese noodles SOBA
Soba is a thin Japanese noodle made from buckwheat flour. In Japan, the word soba tends to be used to describe any thin noodle, in contrast with the thicker noodles that are called udon.

60. ___ Speedwagon REO
The REO Speed Wagon (note the space between “speed” and “wagon”) is the vehicle. REO Speedwagon (no space) is the American rock band.