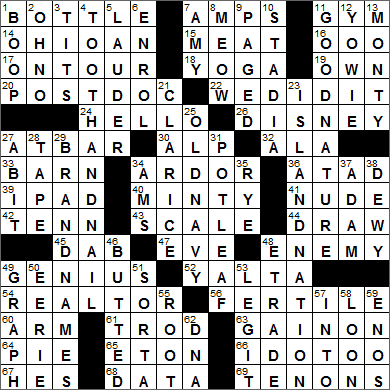 Today’s Wiki-est, Amazonian Googlies
Across
7. Sound investments? : AMPS
An electric guitar, for example, needs an amplifier (amp) to take the weak signal created by the vibration of the strings and turn it into a signal powerful enough for a loudspeaker.

11. Business with monthly memberships : GYM
Our word “gymnasium” comes from the Greek “gymnasion” meaning “public place where exercise is taken”. The Greek term comes from “gymnos” meaning “naked”, as that physical training was usually done unclothed.

14. Neighbor of a Hoosier : OHIOAN
The exact origin of the word “Hoosier” is unknown, but has been around since at least 1830. The term had no direct linkage with Indiana until John Finley of Richmond, Indiana wrote a poem called “The Hoosier’s Nest” in 1833. A few years later, by 1840, “hoosier” was generally accepted as a term for Indiana residents.

16. Winning tic-tac-toe row : OOO
When I was growing up in Ireland we played “noughts and crosses” … our name for the game tic-tac-toe.

18. Exercise with a cobra pose : YOGA
Yoga’s “Cobra Pose” is also called “Bhujangasana”. The Sanskrit word for snake or serpent is “bhujanga”.

20. Lab research assistant, maybe : POSTDOC
A “postdoc” is someone carrying out research or study after the receipt of a doctorate.

24. Word on a red-and-white name tag : HELLO
I wonder why name tags tend to be red and white?

26. “Frozen” studio : DISNEY
“Frozen” is a 2013 animated feature from Walt Disney Studios that is based on the Hans Christian Andersen fairy tale “The Snow Queen”.

30. Mont Blanc, e.g. : ALP
Mont Blanc is the highest mountain in the Alps. The name “Mont Blanc” translates from French into “white mountain”. The mountain lies on the border between France and Italy, and it has been generally accepted for decades that the summit lies within French territory. However, there have been official claims that the summit does in fact fall within the borders of Italy.

32. ___ mode : A LA
In French, “à la mode” simply means “fashionable”. In America, the term has also come to describe a way of serving pie, usually with ice cream, or as I recall from when I lived in Upstate New York, with cheese.

42. Where Graceland is: Abbr. : TENN
Elvis Presley was born in Tupelo, Mississippi and moved to Memphis, Tennessee with his family when he was 13-years-old. Once he had achieved fame, Elvis purchased Graceland, the famous Memphis home that he used for himself and his family. I visited Graceland some years ago, and thoroughly enjoyed the experience.

44. Result of a king vs. king endgame : DRAW
In the game of chess, a game which ends with just the two kings remaining is by definition a draw.

48. “The best is the ___ of the good”: Voltaire : ENEMY
Voltaire was the pen name of French writer and philosopher François-Marie Arouet. He chose the name “Voltaire” as it is an anagram of “Arovet Li”, the Latinized spelling of his family name “Arouet”.

49. Einstein : GENIUS
After Albert Einstein moved to the US in 1933, he became quite a celebrity and his face was readily recognizable. Einstein was frequently stopped in the street by people who would naively ask him if he could explain what “that theory” (i.e. the theory of relativity) was all about. Growing tired of this, he finally learned to tell people that he was sorry, but folks were constantly mistaking him for Albert Einstein!

52. 1945 conference site : YALTA
The Yalta Conference was a wartime meeting between WWII leaders Franklin D. Roosevelt, Winston Churchill and Joseph Stalin. Held in February of 1945, the conference is most remembered for decisions made on the post-war organization of Europe. To a large extent, the three leaders made decisions carving up influence around the world that has had implications to this day.

54. House tour giver : REALTOR
Some helpful blog readers have educated me on the term “Realtor” and have pointed out why the word is capitalized. “Real estate agent” is a general, generic term. “Realtor” is the name given to a member of the trade association known as the National Association of Realtors (NAR). The NAR has gone so far as the trademark the term “Realtor” in the US.

67. “___ Your Dog, Charlie Brown” (1968 TV special) : HE’S
The characters in the cartoon series “Peanuts” were largely drawn from Charles Schultz’s own life, with shy and withdrawn Charlie Brown representing Schultz himself.

69. Mortise inserts : TENONS
One simple type of joint used in carpentry is a mortise and tenon, basically a projection carved at the end of one piece of wood that fits into a hole cut into the end of another. In a dovetail joint, the projecting tenon is not rectangular but is cut at a bias, so that when the dovetails are joined they resist being pulled apart. You’ll see dovetail joints in drawers around the house.

Down
1. Betty who appeared in “Who Framed Roger Rabbit” : BOOP
Betty Boop made her first appearance on the screen in 1930, in a cartoon called “Dizzy Dishes”. Her character was modeled on the the It-girl, the sexy Clara Bow of movie fame. Back then Betty Boop was a sexy poodle and it wasn’t until 1932 that she morphed into completely human form. Betty was quite the risqué figure, but her vampish ways only lasted a few years. When the Production Code of 1934 came into force, Betty started to dress more modestly and toned down her behavior.

“Who Framed Roger Rabbit” was released in 1988, a clever film featuring cartoon characters that interact directly with human beings. The film is based on a novel written by Gary K. Wolf, called “Who Censored Roger Rabbit?” There is a prequel floating around that has never been produced, and it’s called “Who Discovered Roger Rabbit”.

5. Estée of fragrances : LAUDER
Estée Lauder was a very successful businesswoman, with a reputation as a great salesperson. Lauder introduced her own line of fragrances in 1953, a bath oil called “Youth Dew”. “Youth Dew” was marketed as a perfume, but it was added to bathwater. All of a sudden women were pouring whole bottles of Ms. Lauder’s “perfume” into their baths while using only a drop or two of French perfumes behind their ears. That’s quite a difference in sales volume …

7. “Little Women” woman : AMY
“Little Women” is a novel written by American author Louisa May Alcott. The quartet of little women is Meg, Jo, Beth and Amy March. Jo is a tomboy and the main character in the story, and is based on Alcott herself.

8. Speak Persian? : MEOW
The Persian is that long-haired cat with a squashed muzzle. The breed takes its name from its place of origin, namely Persia (Iran).

13. Hall of fame : MONTY
Monty Hall is the stage name of Canadian-born television personality Monte Halperin. Hall is perhaps best known as the longtime host of the game show “Let’s Make a Deal”.

23. Comoros or Barbados : ISLAND NATION
The Comoros is an island nation in the Indian Ocean, off the eastern coast of Africa. The Comoros gained independence from France in 1975.

25. Gap subsidiary : OLD NAVY
Old Navy is a store brand founded and owned by The Gap. The name Old Navy was taken from the Old Navy Cafe in Paris.

48. Charles Schwab competitor : E*TRADE
E*Trade is mainly an online discount brokerage. It was founded in 1982 in Palo Alto, California, and I used to drive by its headquarters almost every day. The company is now run out of New York City. E*Trade produces those famous Super Bowl ads with the talking babies staring into a webcam.

58. Nut job : LOON
The slang term “loon” for a deranged person probably comes from the loud cry of the bird, the loon, but it is also probably influenced by the word “lunatic”.

62. Molecule hidden in 4-, 11-, 23-, 25- and 29-Down : DNA
Francis Crick and James Watson discovered that DNA had a double-helix, chain-like structure, and published their results in Cambridge in 1953. To this day the discovery is mired in controversy, as some crucial results collected by fellow researcher Rosalind Franklin were used without her permission or even knowledge.