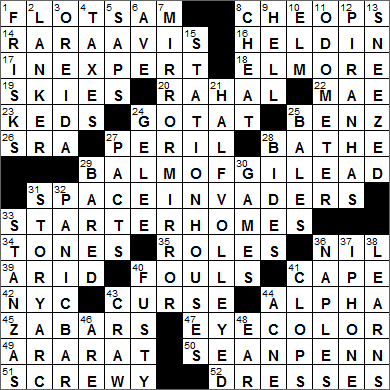 Today’s Wiki-est, Amazonian Googlies
Across
1. Refuse on the surface : FLOTSAM
Flotsam and jetsam are both terms used to describe “garbage” in the ocean. Flotsam is floating wreckage from a ship or its cargo. Jetsam is similar to flotsam, except that it is part of a ship or cargo that is deliberately cast overboard, perhaps to lighten a vessel.

8. The Great Pyramid was his tomb : CHEOPS
Cheops is the name used by the Greeks for the Egyptian pharaoh Khufu. It was Cheops who had the Great Pyramid of Giza constructed.

14. Singular find : RARA AVIS
A “rara avis” is anything that is very rare, and is Latin for “rare bird”.

19. They’re “friendly” in an ad campaign : SKIES
United Airlines used the tagline “Fly the Friendly Skies” in its marketing materials from 1965 to 1996. It was then replaced with “It’s time to fly”. United chose George Gershwin’s “Rhapsody in Blue” as the company’s theme music in 1976, and paid the Gershwin estate a fee of $500,000 for the privilege.

22. Ginnie ___ (home loan source) : MAE
Ginnie Mae is the familiar nickname for the Government National Mortgage Association (GNMA), a government-owned corporation created in 1968 with the objective of promoting home ownership. The “Ginnie Mae” nickname is derived from the GNMA acronym.

23. Footwear brand since 1916 : KEDS
Keds is a brand name of athletic shoe first introduced in 1916 by US Rubber. The shoe was originally marketed as a rubber-soled, canvas-topped sneaker.

25. Auto engine pioneer : BENZ
It is generally accepted that Karl Benz invented the internal combustion engine, although others were doing similar work around the same time. He certainly was awarded the first patent for an automobile, in 1886. His first automobile, the Patent-Motorwagen, couldn’t get up hills unaided so his wife Bertha Benz suggested the introduction of gears. Sure enough, the next model had two gears. Behind every successful man …

29. Resin-yielding tree whose name comes from the Bible : BALM OF GILEAD
The Balm of Gilead tree is also known as the Balsam poplar. The tree’s resin is extracted for use in cough syrups and as a first-aid salve.

31. 1978 arcade classic from Japan : SPACE INVADERS
Space Invaders is one of my favorite video games, a classic from the good old days. When Space Invaders was first released in video arcades in Japan in 1978, it was so popular that it caused a shortage of 100-yen coins.

36. Zippo : NIL
The use of the words “zip” and “zippo” to mean “nothing” dates back to the early 1900s when it was student slang for being graded zero on a test.

42. Jamaica Bay Wildlife Refuge locale, for short : NYC
Jamaica Bay is on the southwestern side of Long Island, New York. The bay is named for the town of Jamaica that is nearby. In turn, the name “Jamaica” is a corruption of the Lenape name “Yameco” meaning “beaver”.

45. Famous Manhattan deli : ZABAR’S
Zabar’s is a famous food store and deli in Manhattan that shows up a lot in TV shows and movies. Zabar’s ran into a some problems a few years ago when a journalist reported that the store’s lobster salad, which had been a hit for 15 years, did not in fact contain any lobster. The spread is now called “Zabster Zalad”.

49. Dormant Turkish volcano : ARARAT
Mount Ararat is in Turkey. Ararat is a snow-capped, dormant volcano with two peaks. The higher of the two, Greater Ararat, is the tallest peak in the country. Ararat takes its name from a legendary Armenian hero called Ara the Beautiful (or Ara the Handsome). According to the Book of Genesis, Noah’s ark landed on Mount Ararat as the Great Flood subsided.

50. “Milk” man : SEAN PENN
Actor Sean Penn is a two-time Oscar winner, for his roles in “Mystic River” released in 2003 and “Milk” released in 2008. Penn’s celebrity on screen is only matched with his fame off the screen. Apart from his “big name” marriages to singer Madonna and actress Robin Wright, Penn is also well known for political and social activism. He perhaps inherited some of his political views from his father, actor and director Leo Penn. As an actor, Leo refused to “name names” in front of the House Un-American Activities Committee and so was blacklisted in Hollywood and had to move into directing to put bread on the table. In later years as a director he gave his son Sean his first acting role, in a 1974 episode of “Little House on the Prairie”.

2. Not so filled out : LANKER
The term “lank” can describe something that is straight and flat, particularly hair. The usage was extended in the early 1800s (especially in the form “lanky”) to mean “awkwardly tall and thin”.

3. Maker of Pixie Crinkles : ORE-IDA
Ore-Ida frozen foods are all made with potatoes. The company is located in Oregon, just across the border from Idaho. “Ore-Ida” is a melding of the two state names.

4. “What we pay for civilized society,” per Oliver Wendell Holmes : TAXES
Oliver Wendell Holmes, Jr. was an Associate Justice of the US Supreme Court from 1902 until 1932. Holmes is oft-quoted, and perhaps the most famous phrase that he coined is “clear and present danger”. He also said “Taxes are the price we pay for a civilized society”. That quotation can be seen above the headquarters of the IRS in Washington, D.C.

6. Long-ago greeting : AVE
“Ave” is a Latin word meaning “hail” as in “Ave Maria”, which translates as “Hail Mary”. “Ave” can also be used to mean “goodbye”.

8. Deviate from Hoyle : CHEAT
Edmond Hoyle was a writer, most famous for documenting the rules and play of card games. In particular, Hoyle first wrote a book on the game of whist that was very popular. Such was the success of Hoyle’s treatises that we use the phrase “according to Hoyle” to mean “according to some respected authority”. When the Poker Hall of Fame was founded in 1979, Edmund Hoyle was one of the first inductees, even though the game of power was invented after he died.

10. Slippery ___ (herbal remedy source) : ELM
The Slippery Elm is a species of elm native to North America and is also known as the Red Elm. The inner bark of the slippery elm can used in a medicinal tea. Elm bark tea is said to ease a sore throat or irritated stomach.

12. Hunting school? : PIRANHAS
Piranhas are reputed to be able to strip an animal to its bones in seconds, but this is somewhat of a myth. Piranhas are not in fact strict carnivores, and usually are more of a nuisance to fishermen rather than a danger, as they tend to eat bait that has been set to catch other fish. Much of the reputation of the piranha is owed to the description written by President Theodore Roosevelt in his book “Through the Brazilian Wilderness”. President Roosevelt was somewhat hoodwinked though, as local fishermen put on a special “show” for him. They dumped hordes of hungry piranhas into a dammed section of a river and then tossed in a sliced up cow. President Roosevelt was pretty impressed by the orchestrated feeding frenzy.

24. Aspic ___ (savory French dish) : GELEE
Aspic is a dish in which the main ingredients are served in a gelatin made from meat stock. “Aspic” is a French word for “jelly”.

The American card game of Spades is one of the Whist family of games, a family which includes Bridge and Hearts. Spades is far less complex than Bridge but is similar in that there is a round of bidding before start of play. The game is usually played with partners, and the idea is to win at least the number of tricks that have been bid. One major difference with Bridge is that the trump suit is always spades, hence the name of the game. Apparently Spades was born as a game in Cincinnati, Ohio in the late 1930s, and then spread via the military in the 1940s.

31. Thread in a series : STORY ARC
A story arc is a continuing storyline in say a television show that has a number of episodes. Story arcs are also found in comics, books, video games, and other forms of media.

33. They make up poetry : STANZAS
“Stanza” is an Italian word meaning “verse of a poem”.

37. Product introduced with the line “And now, we’re going to bring multi-touch to the market” : IPHONE
Apple started development of the iPhone in 2004 in collaboration with Cingular Wireless (now AT&T Mobility). The confidential program was given the name “Project Purple”, and took thrity months to complete at a cost of about $150 million. The iPhone was introduced in 2007 at the Macworld convention in San Francisco.

41. Bridle path sounds : CLOPS
A bridle path is a trail used by horses and their riders.

43. Esophageal pouch : CRAW
“Craw” is another name for the “crop”, a portion of the alimentary tract of some animals, including birds. The crop is used for the storage of food prior to digestion. The crop allows the animal to eat large amounts and then digest that food with efficiency over an extended period. The expression “to stick in one’s craw” is used one when one cannot accept something, cannot “swallow” it.

Joan Baez is an American folk singer and a prominent activist in the fields of nonviolence, civil rights, human rights and environmental protection. Baez has dated some high-profile figures in her life including Bob Dylan, Steve Jobs (of Apple) and Mickey Hart of the Grateful Dead.