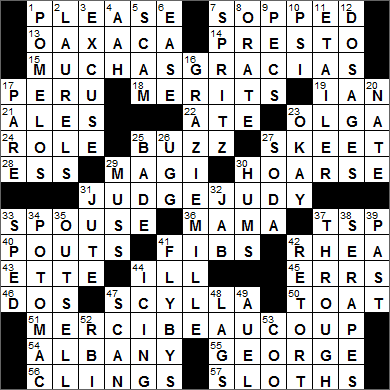 CROSSWORD SETTER: Stanley Newman
THEME: Thanksgiving Phrase … each of today’s themed answers goes with the clue “Thanksgiving phrase”, and is a phrase used in various languages to give thanks. Happy Thanksgiving, everyone!

Today’s Wiki-est, Amazonian Googlies
Across
13. State south of Veracruz : OAXACA
Oaxaca is a state in the southern part of Mexico on the Pacific coast. The state takes the name of Oaxaca, its largest city.

14. Upwards of 170 beats per minute : PRESTO
On a musical score, presto is used to indicate a fast tempo. “Presto” is the Italian word for “quick”.

17. Mario Vargas Llosa’s home : PERU
Mario Vargas Llosa is a Peruvian writer of renown, one of the most significant authors from Latin America by all accounts. Llosa is also very active politically, and in 1990 ran unsuccessfully for the Peruvian presidency.

“The Vampire Diaries” is a series of horror novels aimed at teens, with a spinoff television series of the same name. I don’t do vampires …

21. Newcastle and others : ALES
Newcastle upon Tyne in the North of England is home to the famous Newcastle Brown Ale.

23. Sister of the grand duchess Anastasia : OLGA
The Grand Duchess Olga Nikolaevna was the eldest daughter of the doomed Nicholas and Alexandra, the last Emperor and Empress of Russia. Olga was murdered along with her parents and siblings in 1918.

29. Parts of a Nativity scene : MAGI
“Magi” is the plural of the Latin word “magus”, a term applied to someone who was able to read the stars. Hence, magi is commonly used with reference to the “wise men from the East” who followed the star and visited Jesus soon after he was born.

31. Highest-paid TV star of 2014, by far : JUDGE JUDY
Judge Judy of television fame is actually Judith Sheindlin, a retired family court judge from New York. Ms. Sheindlin reportedly earns $47 million per year for “Judge Judy”. That’s a tad more than she was earning on the “real” bench, I think, and it makes her the highest-earning personality on television by a long shot.

36. “When You’re Good to ___” (“Chicago” tune) : MAMA
The wonderful 1975 musical Broadway “Chicago” is based on a 1926 play of the same name written by a news reporter called Maurine Dallas Watkins. Watkins had been assigned to cover the murder trials of Beulah Annan and Belva Gaertner for the “Chicago Tribune”, and used the story that unfolded as the basis for her play. Annan became the character Roxie Hart, and Gaertner became Velma Kelly. I’ve only ever seen the 2002 movie version of “Chicago” and never a live performance …

40. Classic diva performances? : POUTS
“Diva” comes to us from Latin via Italian. “Diva” is the feminine form of “divus” meaning “divine one”. The word is used in Italy to mean “goddess” or “fine lady”, and especially is applied to the prima donna in an opera. We often use the term to describe a singer with a big ego.

41. Minor inventions : FIBS
To “fib” is to “to tell a lie”. The term likely comes from “fibble-fable” meaning “nonsense”, itself derived from “fable”.

42. Second-largest moon of Saturn : RHEA
Rhea is the second-largest of Saturn’s moons, and the ninth-largest of all the moons in our solar system. The moon is named after the Titan Rhea from Greek mythology. Unlike our moon, Rhea might have an atmosphere of sorts, and even rings.

47. Monster in the “Odyssey” : SCYLLA
Charybdis was a beautiful naiad, a water nymph of Greek mythology. Zeus became enraged with Charybdis and turned her into a sea monster. In Greek myth, the monstrous form of Charybdis lay at one side of a narrow channel of water, with another sea monster, Scylla, lying at the other. Sailors found it impossible to navigate the channel as getting to a safe distance from one monster left them in the clutches of the other. From this tale arose the expression “between Scylla and Charybdis” meaning having two choices, neither of which is a good one.

54. Eastern terminus of the Erie Canal : ALBANY
The Erie Canal runs from Albany to Buffalo in the state of New York. What the canal does is allow shipping to proceed from New York Harbor right up the Hudson River, through the canal and into the Great Lakes. When it was opened in 1825, the Erie Canal had immediate impact on the economy of New York City and locations along its route. It was the first means of “cheap” transportation from a port on the Atlantic seaboard into the interior of the United States. Arguably it was the most important factor contributing to the growth of New York City over competing ports such as Baltimore and Philadelphia. It was largely because of the Erie Canal that New York became such an economic powerhouse, earning it the nickname of “the Empire State”. Paradoxically, one of the project’s main proponents was severely criticized. New York Governor DeWitt Clinton received so much ridicule that the canal was nicknamed “Clinton’s Folly” and “Clinton’s Ditch”.

55. Actual first name of Tom Seaver and Orson Welles : GEORGE
George Thomas “Tom” Seaver is a former baseball pitcher, noted for his ten-year stint with the New York Mets from 1967 to 1977. Seaver earned the nickname “Tom Terrific”, and is the only Met player to have his jersey number retired. When he quit baseball he moved out here to California and opened up a small winery in Calistoga. Keep an eye out for the vineyard’s name, “Seaver Family Vineyards”, and their cabernets “Nancy’s Fancy” and “GTS”.

George Orson Welles (known as “Orson”) is perhaps best-remembered in the world of film for his role in 1941’s “Citizen Kane”. In the world of radio, Welles is known for 1938’s famous broadcast of “The War of the Worlds”, a broadcast that convinced many listeners that the Earth was indeed being invaded by aliens.

57. Idlers : SLOTHS
“Sloth”, meaning “indolence, sluggishness”, comes from the Middle English word “slowe”, the same root for our contemporary word “slow”. The animal, the sloth, is named for its slow-moving behavior.

2. Honors : LAURELS
In the Ancient Olympic Games, the winner of an event was awarded an olive wreath. When the games were revived in 1896, the winners were originally given a silver medal and an olive branch, with runners-up receiving a bronze medal and a laurel branch. The tradition of giving gold, silver and bronze medals began at the 1904 Summer Olympic Games held in St. Louis, Missouri.

5. Put one over on : SCAM
The slang term “scam” meaning a swindle may come from the British slang “scamp”.

9. What bench presses enhance : PECS
“Pecs” is the familiar term for the chest muscle, more correctly known as the pectoralis major muscle. “Pectus” is a the Latin word for “breast, chest”.

10. Symbol for Freud’s field : PSI
The Greek letter “psi” is used as a symbol for the fields of psychology and psychiatry.

Sigmund Freud was an Austrian neurologist, and founder of the psychoanalytic school of psychiatry.

11. Merchandiser that’s never closed : E-TAILER
“E-tail” is the term used these days for online shopping. E-tail is often compared to regular shopping in the “real world” by juxtaposing it with a “brick and mortar” store.

20. Statistician Silver : NATE
Nate Silver is a statistician who first gained notoriety by developing a forecasting system that predicted the future performance of baseball players. He then made a name for himself in the world of politics by predicting the outcome of the 2008 US presidential race. Silver successfully predicted the outcome of the election in 49 of the 50 states, missing out on Indiana, which Barack Obama won by less than 1% of the vote.

26. Big name in boots : UGG
Uggs are sheepskin boots that originated in Australia and New Zealand. Uggs have sheepskin fleece on the inside for comfort and insulation, with a tanned leather surface on the outside for durability. Ugg is a generic term down under, although it’s a brand name here in the US.

34. It meets the Shenandoah at Harper’s Ferry : POTOMAC
Harpers Ferry is a town in West Virginia located at the confluence of the Potomac and Shenandoah rivers. We tend to remember Harpers Ferry as the place where John Brown led a raid on a federal armory during the Civil War with the intent of arming slaves.

38. Clothing items with fringes : SERAPES
“Serape” is the English pronunciation and spelling of the Spanish word “zarape”. A zarape is like a Mexican poncho, a soft woolen blanket with a hole in the middle for the head. Most serapes have colorful designs that use traditional Mayan motifs.

41. Visits by Voyager 1, e.g. : FLYBYS
NASA’s Voyager program launched two unmanned probes to explore the outer limits of our solar system. The probes were launched on different dates in 1977, with each date chosen to take advantage of particular alignments of the planets. The two probes are still active to some extent, and will be so for at least another decade. Voyager 1 is now the farthest man-made object from the Earth. In fact, Voyager 1 left our solar system in 2012, making it the first spacecraft to enter interstellar space. Cool …

An image file on a computer can be compressed so that it takes up less space. Some time the compression is “lossless” meaning even though the file is compressed, and data it is discarded, the image still looks the same. One example of data that can be discarded without loss of quality, is to not bother recording the color information of pixels that are the same color as others. Just saying “this pixel is the same is that one” takes up less space. One can compress files even more if one allows loss of quality. One well known compression algorithm that is “lossy” is the jpeg (also “.jpg”) format. The person compressing the file can decide how much quality will suffer in jpeg format, with larger files being of higher quality than the smaller ones.

49. Writer about Cro-Magnons and Neanderthals : AUEL
As Jean Auel prepared her first book in the “Earth’s Children” series, she did a lot of research about the Ice Age, the setting for her stories. She went as far as taking a survival course in cold conditions, learning to build an ice cave and how to make fire, tan leather and knap stone.

The Homo genus includes the species Homo sapiens (modern humans), but we’re the only species left in that genus. The last known species related to humans was Homo neanderthalensis (Neanderthal Man) which died off about 24,000 years ago. However, another species was discovered in Indonesia in 2003 that has been dubbed Homo floresiensis (Flores Man … sometimes called “hobbit”), and it may possibly have lived as recently as 12,000 years ago. Watch this space …