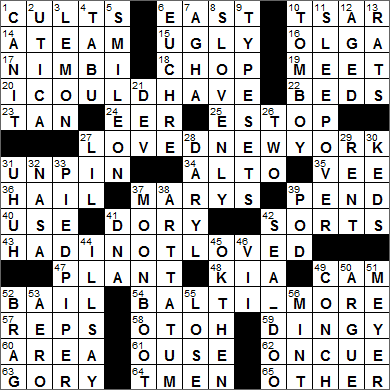 CROSSWORD SETTER: Herre Schouwerwou
THEME: Nash Quote … today’s themed answers give us a quotation from Ogden Nash. Anyone solving online might want to try inserting the word “HYPHEN” in the rebus square in 54-across (and 42-down), so that a completion registers:

Today’s Wiki-est, Amazonian Googlies
Across
10. Bygone monarch : TSAR
The last ruler of Imperial Russia was Tsar Nicholas II (of the House of Romanov). Famously, the Tsar and his family were murdered in 1918 in the basement of a house in Yekaterinburg, Russia by members of the Bolshevik secret police. The Tsar’s youngest daughter was 16-year-old Anastasia and rumors of her escape have persisted for years. The rumors grew with the help of numerous women who claimed to be Anastasia. In 2009, DNA testing finally proved that the remains of all of the Tsar’s immediate family, including Anastasia, have been found and identified.

16. One of Chekhov’s “Sisters” : OLGA
Olga, Masha and Irina were the “Three Sisters” in the play by Anton Chekhov. The three title characters were inspired by the three Brontë sisters, the English authors.

17. Rain makers : NIMBI
Nimbus (plural nimbi) is another word for a halo, or an aura. Nimbus is Latin, and can also mean cloud.

20. Beginning of a quote by Ogden Nash, with punctuation included : I COULD HAVE
27. Quote, part 2 : LOVED NEW YORK
43. Quote, part 3 : HAD I NOT LOVED
54. End of the quote : BALTI-MORE
The poet Ogden Nash was born in Rye, New York in 1902 and lived in New York City for many years. Nash moved to Baltimore in 1934, where he remained for the rest of his life. One of his famous quotations referred to living in New York and Baltimore:

I could have loved New York had I not loved Balti-more.

24. Always, according to Shakespeare : E’ER
It is not actually known when the great English playwright William Shakespeare was born, but he was baptized on April 26th, 1564. Traditionally, his birthday is celebrated on April 23rd, which is the feast day of Saint George and England’s National Day. Shakespeare also died on April 23rd, in 1616 at the presumed age of exactly 52 years.

25. Block, at the bar : ESTOP
The term “estop” means to block or stop by using some legal device. The word “estop” comes from Old French, in which “estopper” means “to stop up” or “to impede”.

34. Many a Vienna Boys’ Choir boy : ALTO
The Vienna Boys’ Choir is of course based in Austria, but is well known for touring the whole world. The choir is actually divided into four full choirs that tour, and which are individually called the Bruckner, Haydn, Mozart and Schubert Choirs.

35. Lead to victory? : VEE
The leading letter in the word “victory” is the letter V (vee).

36. With 37-Across, desperate attempts : HAIL
37. See 36-Across : MARYS
A “Hail Mary pass” is a desperation move in American football in which the a long pass is thrown with very little chance of a success, right at the the end of a game or at the end of a half. The term dates back to thirties, and was probably first used at Notre Dame. The “Hail Mary” is a prayer in the Christian tradition that is of particular significance Roman Catholicism.

39. Remain in limbo : PEND
In the Roman Catholic tradition, “Limbo” is a place where souls can remain who cannot enter heaven. For example, infants who have not been baptized are said to reside in Limbo. Limbo is said to be located on the border of Hell. The name was chosen during the Middle Ages from the Latin “limbo” meaning “ornamental border to a fringe”. We use the phrase “in limbo” in contemporary English to mean “in a state of uncertainty”.

41. Flat-bottomed boat : DORY
A dory is a small boat, around 20 feet long with a shallow draft, a flat bottom and a sharp bow. Dories are commonly used for fishing.

42. Triages, e.g. : SORTS
“Triage” is the process of prioritizing patients for treatment, especially on a battlefield. The term “triage” is French and means “a sorting”.

48. Soul producer : KIA
The Kia Soul is a compact car produced in South Korea, although it was designed by Kia here in Irvine, California.

61. Sussex river where Virginia Woolf tragically ended her life : OUSE
“Ouse” is the name of several rivers in England, most notably the Ouse in Yorkshire. The name comes from the Celtic word “usa” meaning “water”.

Virginia Woolf was an English author active in the period between the two World Wars. Woolf’s most famous novels were “Mrs. Dalloway”, “To the Lighthouse” and “Orlando”. She also wrote a long essay entitled “A Room of One’s Own” in which she states “A woman must have money and a room of her own if she is to write fiction.” Woolf suffered from severe depression in the latter part of her life. When she was 59 years old, Wolfe filled her coat pockets with rocks and walked into the River Ouse near her home, drowning herself.

64. Ones on the money trail, informally : T-MEN
A T-man is a law-enforcement agent of the US Treasury (T is for Treasury).

Down
2. Empire State city : UTICA
Utica in New York is known as “Second Chance City” these days, due to the recent influx of refugees from war-torn parts of the world and from Bosnia in particular. These immigrants have helped revitalize the area and reverse a trend of population loss.

3. One of the original Life Savers fruit flavors : LEMON
Life Savers were introduced in 1912. The candy was created by Clarence Crane who contracted a pill manufacturer to press his formulation for mints into shape. The pill manufacturer found that the pieces of candy were produced more easily if a hole was stamped in the middle. The Life Saver name was chosen as the candy had the same shape as lifebuoys.

4. Perfume that’s off-limits? : TABU
Tabu is a whole line of cosmetics and perfumes produced by the House of Dana. The company’s brand names were purchased by a Florida company called Dana Classic Fragrances in 1999.

6. Bamboozle : EUCHRE
Euchre is a card game that probably came to the US from Germany, introduced by German farmers who settled in Wisconsin. Euchre is a trick-taking game usually played by four people in two partnerships. Unlike bridge, Euchre is played with a stripped down deck of 24 or 32 cards. The verb “to euchre” is slang for “to cheat, swindle”, a term that presumably comes from the card game.

7. Ottoman honorific : AGHA
“Aga” (also “agha”) is a title that was used by both civil and military officials in the Ottoman Empire.

21. Patel of “The Newsroom” : DEV
Dev Patel is an actor from Harrow in England. Patel is best known for playing the lead in the hit movie “Slumdog Millionaire”. He also stars in a lovely 2012 film called “The Best Exotic Marigold Hotel” alongside an incredible cast that included Judi Dench, Bill Nighy, Maggie Smith and Tom Wilkinson. Patel can be seen regularly in the marvelous HBO drama series called “The Newsroom”.

28. Musical Hall : DARYL
Daryl Hall & John Oates are a pop music duo, most successful in the late seventies and early eighties. They had six number one hits, including the 1982 release “Maneater”.

30. Classic canvas-top sneakers : KEDS
Keds is a brand name of athletic shoe first introduced in 1916 by US Rubber. The shoe was originally marketed as a rubber-soled, canvas-topped sneaker.

32. Booster org. : NASA
The Soviet Union launched the Sputnik satellite towards the end of 1957, a development that shocked the establishment in the US. Within months, President Eisenhower created the Advanced Research Projects Agency (ARPA, now DARPA) and the National Aeronautics and Space Administration (NASA). The Space Race had begun …

33. Leading folk figure : PIED PIPER
The legend of the Pied Piper of Hamelin dates back to medieval times. Recently there have been suggestions that the story is rooted in some truth, that the town of Hamelin did in fact lose many of its children, perhaps to plague. The suggestion is that the tale is an allegory.

37. Fashionable 1980s item resembling a bit of astronaut’s attire : MOON BOOT
Moon Boots are fashion footwear items that were introduced in the early seventies in Italy. The brand name is a reference to the resemblance between Moon Boots and the boots used by astronauts on the Moon. Moon Boots are still being produced today, mainly in Ukraine.

38. Nearly blind jazz great : ART TATUM
Art Tatum was a jazz pianist who overcame the disability of being nearly blind from birth. Many laud Tatum as the greatest jazz pianist of all time.

39. Milkweed feature : POD
Common milkweed is a perennial herb that is found growing wild in much of North America. The plant’s name comes from the white latex sap that exudes when almost any part of the plant is cut or broken. The fruit of the common milkweed is a green pod, which dries out and turns brown before bursting open to disseminate fluffy seeds.

46. Hour on a grandfather clock : VII
There are several sizes of “longcase clocks”, tall, freestanding clocks driven by a pendulum swinging inside a tower below the clock face. A longcase clock over 6 feet tall is called a grandfather, and one below five feet is a granddaughter, One that falls between five and six feet is known as a grandmother. The name of the clock derives from an 1876 song called “My Grandfather’s Clock”.

49. Seashore souvenir : CONCH
Although conch is now used as a generic term for largish sea snails and their shells, the true conch belongs to a specific group of gastropods. The “meat” of a conch is very popular, and is the second most popular edible snail after “escargots”. The conch shell can of course be used as a wind instrument, and the true conch is also a good source for pearls.

51. “The Host” author Stephenie : MEYER
The author Stephen Meyer is best-known for her “Twilight” series of vampire romance novels. The “Twilight” books are aimed at young adults. Meyer also wrote a 2008 adult sci-fi novel called “The Host”, which went straight to the top of the New York Times Best Seller list.