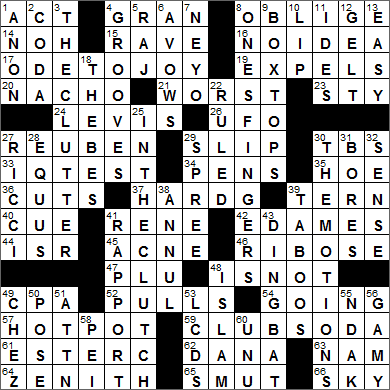 CROSSWORD SETTER: Joe DiPietro
THEME: Across Through Down … each of today’s themed answers is in two parts, an across-answer that passes through a down-answer. The full answer then is ACROSS-ANSWER (THROUGH) DOWN-ANSWER:

Today’s Wiki-est, Amazonian Googlies
Across
4. Part of GTO : GRAN
The acronym GTO was used on several touring cars (including a famous Pontiac) and stands for Gran Turismo Omologato, which is an Italian phrase that translates as “Grand Touring Homologated”. Italian car manufacturers started the tradition of calling their luxury performance cars “Gran Turismo”, and calling those cars they approved for racing “Gran Turismo Omologato”. The phrase “gran turismo omologato” translates as “grand touring homologated”, with “homologated” being a technical term signifying official approval.

14. Tokyo stage shows : NOH
Noh is a form of musical drama in Japan that has been around since the 14th century. Many of the Noh performers are masked, allowing all the roles to be played by men, both male and female parts.

17. Highlight of Beethoven’s Ninth : ODE TO JOY
“Ode to Joy” is a poem written in 1785 by German poet Friedrich Schiller. Ludwig van Beethoven gave the poem great notoriety when he used it in his Ninth “Choral” Symphony that was first performed in 1824.

Beethoven’s Ninth Symphony is his wonderful “Choral” symphony. When it was composed in 1824 it was the first time that a major composer had used voices in a symphony. By the time of the Ninth’s premier, Beethoven was essentially deaf. He insisted on sharing the stage with the musical director (who was conducting), and was visibly counting out time but was off by quite a few measures. When the last notes were played there was enthusiastic applause, although Beethoven was still conducting. The lead contralto had to walk over to Beethoven, stop him, and turn him to the audience to receive his adulation.

20. Chip variety : NACHO
The dish known as “nachos” were supposedly created by the maître d’ at a restaurant called the Victory Club in the city of Piedras Negras, Coahuila, Mexico. The name of the maître d’ was Ignacio “Nacho” Anaya.

24. Togs with red tags : LEVIS
Levi Strauss was the founder of the first company in the world to manufacture blue jeans. Levi Strauss & Co. opened in 1853 in San Francisco. Strauss and his business partner were awarded a patent in 1873 for the use of copper rivets to strengthen points of strain on working pants.

26. Aerial anomaly : UFO
In 1952, the USAF revived its studies of reported sightings of unidentified flying objects (UFOs) in a program called Project Blue Book. Project Blue Book ran from 1952 until it was shut down in 1969 with the conclusion that there was no threat to national security and that there were no sightings that could not be explained within the bounds of modern scientific knowledge.

27. Lunch order with sauerkraut : REUBEN
There are conflicting stories about the origin of the Reuben sandwich. One is that it was invented around 1914 by Arnold Reuben, an immigrant from Germany who owned Reuben’s Deli in New York.

“Sauerkraut” translates from German as “sour herb” or “sour cabbage”. During WWI, American sauerkraut producers changed its name in order to distance their product from “the enemy”. They called it “Liberty cabbage”.

30. USA competitor : TBS
Turner Broadcasting System (TBS) adopted the slogan “Very Funny” in 2004. The slogan is meant to contrast TBS with its sister channel TNT, which focuses on drama shows. The TNT slogan is “Drama, Period”.

33. Measure of brightness : IQ TEST
The original Binet-Simon Intelligence Scale for scoring IQ tests was developed by French psychologist Alfred Binet and his student Theodore Simon. The scale was revised in 1916 by Lewis M. Terman, a psychologist at Stanford University, resulting in the Stanford-Binet Intelligence Scale.

37. What Germany’s leader lacks? : HARD G
The word “Germany” starts with a soft letter G, not a hard letter G.

39. Arctic ___ : TERN
Terns are seabirds that are found all over the world. The Arctic Tern makes a very long-distance migration. One Arctic Tern that was tagged as a chick in Great Britain in the summer of 1982, was spotted in Melbourne, Australia just three months later. The bird had traveled over 14,000 miles in over those three months, an average of about 150 miles a day. Remarkable …

41. Lacoste of tennis : RENE
René Lacoste was a French tennis player who went into the clothing business, and came up with a more comfortable shirt that players could use. This became known as a “tennis shirt”. When it was adopted for use in the sport of polo, the shirts also became known as “polo shirts”. And then the “golf shirt” is basically the same thing.

42. One of a group of singing brothers : ED AMES
The Ames Brothers were a singing quartet who were active in the 1950s. The “brothers” (actually three brothers and a cousin) started out as an act called the Amory Brothers. After the quartet disbanded in 1961, Ed Ames went on to have a successful solo singing career, and became a familiar television actor. Ed played “Mingo”, the sidekick to the title character on “Daniel Boone” that ran in the sixties.

44. Medit. country : ISR
The area that is now Israel was ruled by the British after WWI as the British Mandate of Palestine. The British evacuated the area after WWII, largely responding to pressure from both Jewish and Arab nationalist movements. The British Mandate expired on 14 May 1948 and the State of israel was established at the same time. This declaration of a new state was followed by the immediate invasion of the area by four Arab countries and the start of the 1948 Arab-Israeli War. A ceasefire was declared after a year of fighting and tension has persisted in the region ever since.

45. Retin-A treats it : ACNE
Retin-A is a brand name for the drug Tretinoin, the acid form of vitamin A that is used to treat acne.

46. Biochemical sugar : RIBOSE
Ribose is a so called “simple sugar”, a monosaccharide. Ribose is the key component in RNA that differentiates it from DNA.

59. Gin fizz ingredient : CLUB SODA
By definition, a cocktail known as a Fizz includes lemon or lime juice and carbonated water. The most popular of the genre is the Gin Fizz, made from 3 parts gin, 2 parts lemon juice, 1 part sugar syrup and 5 parts soda water. There is also a variant known as a sloe gin fizz.

61. Brand name in immunity boosting : ESTER-C
As far as I can tell, the brand Ester-C is just vitamin C.

62. Fox’s partner on “The X-Files” : DANA
“The X-Files” is a very successful science fiction show that aired on the Fox network from 1993 to 2002. The stars of the show are David Duchovny (playing Fox Mulder) and the very talented Gillian Anderson (playing Dana Scully). By the time the series ended, “The X-Files” was the longest running sci-fi show in US broadcast history.

Down
1. Before long, quaintly : ANON
“Anon” originally meant “at once” and evolved into today’s meaning of “soon” apparently just because the word was misused over time.

2. Opus ending : CODA
In music, a coda is primarily a passage that brings a movement to a conclusion. “Coda” is Italian for “tail”.

The Latin for “work” is “opus”, with the plural being “opera”.

5. British rule in India : RAJ
The period of colonial rule by the British in South Asia from 1858 to 1947 is referred to as the British Raj. Prior to 1858, the area was ruled by a private enterprise, the British East India Company. “Raj” is the Hindi word for “reign”.

7. R&B artist with the hits “So Sick” and “Because of You” : NE-YO
Ne-Yo is the stage name of R&B singer Shaffer Chimere Smith.

27. Christina of “Sleepy Hollow” : RICCI
Christina Ricci is an American actress who found fame on the big screen at an early age, playing the very young Wednesday Addams in the 1991 movie version of “The Addams Family”.

“Sleepy Hollow” is a Tim Burton film released in 1999. It is a screen adaptation of the short story “The Legend of Sleepy Hollow” by Washington Irving. Stars of the film are Johnny Depp and Christina Ricci.

28. 1975 Tony-winning play with a Latin name : EQUUS
“Equus” is a play written in 1973 by Peter Shaffer. Shaffer wrote the play after he heard about a real-life crime in which a 17-year-old youth blinded six horses. The play tells of a psychiatrist treating a young man who has an unhealthy fascination with horses.

29. Bender : SPREE
Both jag and bender describe periods of unrestrained activity, particularly involving alcohol. Both words have been in use since the 1800s.

39. Many of the Ten Commandments : TABOOS
The word “taboo” was introduced into English by Captain Cook in his book “A Voyage to the Pacific Ocean”. Cook described “tabu” (likely imitative of a Tongan word that he had heard) as something that was both consecrated and forbidden.

43. Ditz : DINGBAT
The word “dingbat” has been used to mean a “fool” since the early 1900s. It became very popular after it was used repeatedly by Archie Bunker in the seventies TV show “All in the Family”.

48. Cat Stevens’s surname, now : ISLAM
The singer-songwriter that I mainly know as Cat Stevens has been through a few names in his life. He was born in London as Steven Georgiou and adopted the stage name “Steve Adams” in the mid-sixties. A year later he changed his stage name to “Cat Stevens”, with which he had most of success. During this time he had hits with classic songs like “Wild World”, “Moonshadow” and “Morning Has Broken”. He also wrote the song “The First Cut Is the Deepest”, which became a hit for four different artists. In 1977, Stevens converted to Islam and took the name Yusuf Islam in 1978.

49. Bistro name starter : CHEZ
“Chez” is a French term meaning “at the house of”, which comes from the Latin word “casa” meaning “cottage” or “hut”.

55. State bordering Can. : NDAK
The Dakota Territory was formed in 1861 and ceased to exist with the admission to the Union of the states of North Dakota and South Dakota. The territory was split into two states in 1889 largely due to lobbying by the Republican Party, which enjoyed a lot of support in the Dakota Territory. The admission of two states added to the political power of the party in the US Senate, by adding four safe Republican seats.

58. Can. province not bordering the U.S. : PEI
Prince Edward Island (PEI) is a maritime Canadian province. The island at the center of the province was named for Prince Edward, the fourth son of King George III and the father of Queen Victoria.