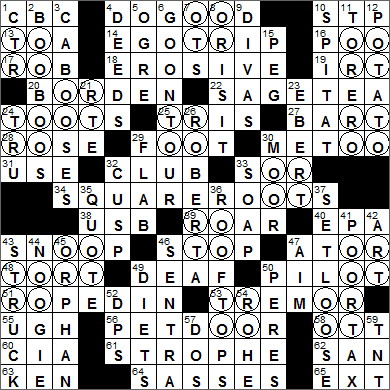 34A. Math calculations exemplified 14 times in this puzzle : SQUARE ROOTS

Today’s Wiki-est, Amazonian Googlies
Across
1. North-of-the-border media inits. : CBC
CBC stands for Canadian Broadcasting Corporation, Canada’s national public radio and television broadcaster. In terms of financing and structure, CBC is akin to the BBC in Britain. But as commercial advertising is permitted, it perhaps more akin to RTE, the national broadcasting company in my homeland of Ireland.

19. N.Y.C. subway line : IRT
The Interborough Rapid Transit Company (IRT) was the original private operator of the New York Subway when it opened in 1904. The city took over ownership of the system in 1940, but the lines originally operated by the IRT are still known by the IRT moniker.

20. Elsie the Cow’s brand : BORDEN
Elsie the Cow is the mascot of the Borden Company. Elsie first appeared at the New York World’s Fair in 1939, introduced to symbolize the perfect dairy product. Elsie was also given a husband named Elmer the Bull. Elmer eventually moved over to the chemical division of Borden where he gave his name to Elmer’s Glue.

22. Healthful herbal beverage : SAGE TEA
In Britain, sage is listed as one of the four essential herbs. And those would be “parsley, sage, rosemary and thyme”.

25. Speaker in the Baseball Hall of Fame : TRIS
Tris Speaker was a Major League Baseball player, the holder of the record for the most doubles hit in a career. He led the Boston Red Sox to two World Series championships, in 1912 and 1915.

29. Locale for tarsals and metatarsals : FOOT
The tarsals are the ankle bones, equivalent to the carpals in the wrist.

38. Kind of port : USB
Universal Serial Bus (USB) is an industry standard dealing with how computers and electronic devices connect and communicate, and deal with electrical power through those connections.

39. 2013 #1 Katy Perry hit : ROAR
Katy Perry is an American singer who grew up listening to and singing gospel music, as she was the daughter of two Christian pastors. In fact, her first musical release was a gospel album in 2001. She has branched out since then. Her first successful single was “Ur so Gay”, followed by “I Kissed A Girl”. She was married (only for a year) to the British comedian Russell Brand, until 2012.

48. Trespassing, for one : TORT
The word “tort” is a French word meaning “mischief, injury or wrong”. Tort law is generally about negligence, when the action of one party causes injury to another but that action falls outside of the scope of criminal law.

58. The Senators, on sports tickers : OTT
The Senators are the NHL hockey team in Ottawa, Canada. The current team, founded in the 1992-93 season, is the second NHL team in the city to use the name “Senators”. The original team was founded in 1917 and had a very successful run until the league expanded into the US in the late twenties. The cost of operating in what became the smallest NHL city eventually drove the Senators to St. Louis where they played for a year as the Eagles before finally folding.

60. “The Bourne Identity” org. : CIA
“The Bourne Identity” is a great spy novel written by Robert Ludlum, and first published in 1980. It has been ranked as the second best spy novel of all time, just behind the even more enjoyable “The Spy Who Came in from the Cold” by John le Carre. I’ll agree with that sentiment. Ludlum wrote two sequels, and all three parts of the Bourne Trilogy have been made into very successful movies now, starring Matt Damon in the title role. Ludlum died before he could write more than three novels featuring Jason Bourne, but five more titles in the series have been published, written by Eric Van Lustbader. I must check them out …

61. Poetic stanza : STROPHE
In general terms, in poetry a “strophe” is a pair of stanzas with alternating form. So, a poem might be made up from a number of strophes, and twice that number of stanzas.

62. ___ José : SAN
San José is a capital of the Central American country of Costa Rica.

63. Author Kesey : KEN
Ken Kesey wrote the novel “One Flew Over the Cuckoo’s Nest”. Kesey was one of a group of friends who called themselves the “Merry Pranksters”, a bunch of guys who were associated with the likes of Jack Kerouac, Allen Ginsberg and Timothy Leary, all icons of the Beat Generation.

3. Ones back on track? : CABOOSES
The word “caboose” originally came from Middle Dutch and was the word for a ship’s galley. When the last car in a train in North America was given a stove for the comfort of the crew, it took on the name “caboose”. The term has also become slang for a person’s backside.

4. Monopoly pile : DEEDS
Apparently, when Fidel Castro came to power in Cuba he banned the very popular game “Monopoly”, as he viewed it as a symbol of capitalism. In fact, he ordered that every copy of the game on the island be destroyed.

9. Spotlight seekers : DIVAS
“Diva” comes to us from Latin via Italian. “Diva” is the feminine form of “divus” meaning “divine one”. The word is used in Italy to mean “goddess” or “fine lady”, and especially is applied to the prima donna in an opera. We often use the term to describe a singer with a big ego.

11. Entertainer with a cape : TORERO
“Toreador” is an old Spanish word for a bullfighter, but it’s a term not used any more in Spain nor in Latin America. In English we use the term “toreador”, but in Spanish a bullfighter is a “torero”.

12. Common gnocchi ingredient : POTATO
Gnocchi are small dumplings in Italian cuisine that can be made from various ingredients including potato, my personal favorite. The name “gnocchi” might be derived from the Italian “nocchio” meaning “knot in wood”.

15. Good name for a baseball pitcher? : PEG
“To peg” something is to throw it, an informal term.

21. U.P.S. driver’s assignment: Abbr. : RTE
United Parcel Service (UPS) is based in Sandy Springs, Georgia and has its own airline that operates out of Louisville, Kentucky.

26. Vocalist Flack : ROBERTA
I suppose the most famous song released by American singer Roberta Flack is her 1972 hit “The First Time Ever I Saw Your Face”, a beautiful number composed by British singer/songwriter Ewan MacColl in 1957. MacColl wrote the song for American singer Peggy Seeger, who he later married.

41. Chance card in Monopoly with a $15 fee : POOR TAX
One of the Chance cards in the game of Monopoly instructs a player to pay a “poor tax” of $15. I think that this “poor tax” might be reference to the “poor rate” that was paid by property owners in England and Wales in the 17th through the 19th centuries. This tax was collected to pay for relief of the poor.

42. Murals, e.g. : ART
A “mural” is a painting that is applied directly to a wall or a ceiling. The term comes from the Latin “murus” meaning “wall”.

44. Painful bit of horseplay : NOOGIE
A “noogie” is that childish move where someone rubs his (and it’s always a guy!) knuckles into a person’s head to create a little soreness.

46. Nissan model : SENTRA
The Nissan Sentra is sold as the Nissan Sunny back in Japan.

50. Israel’s Shimon : PERES
Shimon Peres is an Israeli statesman who was born in Poland. Peres served as President of the State of Israel from 2007 to 2014. Born Szymon Perski in Poland, while president Peres was the oldest head of state in the world. While serving foreign minister, he represented Israel in the secret negotiations that led to the signing of the Oslo Accords in 1993. For that work, Peres was jointly awarded the Nobel Peace Prize with Yitzhak Rabin and Yasser Arafat.

54. Architect Ludwig Mies van der ___ : ROHE
Ludwig Mies van der Rohe was a German architect who was routinely referred to simply as “Mies”. I am a philistine, I know, but Mies’ buildings look very plain to me. However, he did come up with two far-from-plain sayings: “less is more” and “God is in the details”.

59. Stick with a fuse : TNT
TNT is an abbreviation for trinitrotoluene. Trinitrotoluene was first produced in 1863 by the German chemist Joseph Wilbrand, who developed it for use as a yellow dye. TNT is relatively difficult to detonate so it was on the market as a dye for some years before its more explosive properties were discovered.