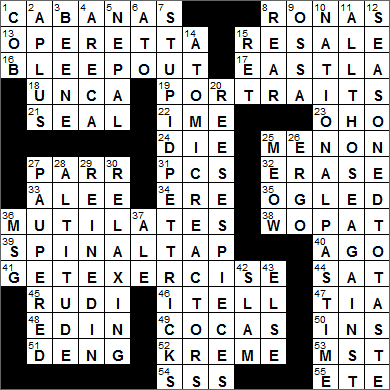 Today’s Wiki-est, Amazonian Googlies
Across
1. [One arrangement of the letters in the grid] : CABANAS (HUTS)
Our word “cabana” comes from the Spanish “cabaña”, the word for a small hut or a cabin.

8. Jaffe and Barrett : RONAS
Rona Jaffe was an American novelist perhaps most famous for two of her books, “The Best of Everything” and “Mazes and Monsters”. “The Best of Everything” was published in 1958 and has been compared with the HBO television series “Sex and the City” as it depicts women in the working world. “Mazes and Monsters” was published in 1981 and explores a role-playing game similar to Dungeons & Dragons and the impact it has on players.

13. Victor Herbert’s “Babes in Toyland,” e.g. : OPERETTA
“Babes in Toyland” is an operetta by Victor Herbert, first performed in 1903 in Chicago. The musical play “The Wizard of Oz” had appeared on Broadway the prior year and was a resounding hit, so the creators of “Babes in Toyland” wanted to cash in on that success by producing something in the same genre. While not as big a hit as “Oz”, the show did very well. It played for 192 performances, and is still produced today. The basic storyline makes use of various characters from the Mother Goose nursery rhymes, wound into a Christmas entertainment.

17. Latino Walk of Fame locale, informally : EAST LA
The Latino Walk of Fame is located on Whittier Boulevard in East Los Angeles. Modeled on Hollywood’s famous Walk of Fame, it was inaugurated in 1997 with the mission of honoring Latino celebrities. Each name is engraved in a Sun Plaque.

18. Donald Duck, to his nephews : UNCA
Donald Duck’s nephews are identical triplets called Huey, Dewey and Louie, and they first appeared on the screen in 1938. Once in awhile due to errors in production, a fourth duck can be seen in the background. This little “mistake” is affectionately called “Phooey Duck” by folks in the industry.

22. The Beatles’ “___ Mine” : I ME
“I Me Mine” is one of the relatively few Beatles songs to have been written by George Harrison (and indeed performed by him). Harrison chose the same title for his autobiography, published in 1980 just a few weeks before John Lennon was assassinated in New York City.

31. Some clones : PCS
In the early days of desktop computing, an IBM clone (also a “PC clone”) was a computer built by an IBM competitor that was designed to function just like an IBM, but without using any copyrighted material or trade secrets that were the intellectual property of IBM. Clones were always a competitive issue for IBM, and perhaps were part of the reason that IBM doesn’t make desktop computers today …

33. Protected from squalls : ALEE
“Alee” is the direction away from the wind. If a sailor points into the wind, he or she is pointing “aweather”.

38. Tom who played TV’s Luke Duke : WOPAT
Tom Wopat is the actor who played Luke Duke on the television series “The Dukes of Hazzard”. Wopat also played one of Cybill Shepherd’s exes on the nineties sitcom “Cybill”. More recently, he had a small part in Quentin Tarantino’s “Django Unchained”, playing US Marshal Gil Tatum.

39. Titular rock band whose film’s IMDb rating goes up to 11 rather than 10 : SPINAL TAP
“This Is Spın̈al Tap” is a rock musical mockumentary about the fictional band Spinal Tap, directed by the great Rob Reiner. I love Rob Reiner’s work, but this movie … not so much …

45. Designer Gernreich : RUDI
Rudi Gernreich was a fashion designer, born in Austria. Gernreich fled Austria due to Nazi influence, and ended up in Los Angeles. He is noted for design of the monokini, the first topless swimsuit.

47. “Sister, Sister” sister : TIA
“Sister, Sister” is a sitcom that originally aired from 11994 to 1999 starring identical twin sisters Tia and Tamera Mowry. Tia and Tamera play two sisters who were separated at birth, one being adopted by a single mother, and the other by a single father. The sisters happen up each other 14 years later, and hilarity ensues (I am told …).

49. Plants that are illegal to import : COCAS
The coca plant is native to South America, similar in appearance to a blackthorn bush. Coca leaves have been chewed for centuries, perhaps even as far back as 3,000 years ago. Chewing the leaves apparently produces a pleasurable, numb sensation in the mouth and a pleasant taste. The most famous alkaloid in the leaf is cocaine, but this wasn’t extracted in its pure form until the mid-1800s. The cocaine was used in a medicines and tonics and other beverages, including the original version of Coca-Cola! Before 1903, a glass of Coke would contain about 9 mg of cocaine. Coca-Cola still uses coca leaves, as the flavor is prized, but the cocaine is extracted before it arrives at the bottling plant.

51. Tiananmen Square demonstration suppressor : DENG
Deng Xiaoping was the Paramount Leader of the People’s Republic of China from 1978 to 1992. It was Deng Xiaoping who is given the credit for setting policies that led to China’s current economic boom. He moved the country towards a market economy and opened the borders to allow foreign investment.

Tiananmen Square is located in the center of Beijing, China. It is the third largest city square in the world, after Merdeka Square in Jakarta, Indonesia and Praça dos Girassóis in Palmas, Brazil. Tiananmen Square can hold up to 600,000 people, and has been the site of major protests on several occasions over the years. The protests of 1989 are also referred to as the “Tiananmen Square massacre of 1989” as 200-300 (official figures) or perhaps several thousand (unofficial estimates) protestors and soldiers were killed when the military was sent in to restore order.

52. Krispy ___ : KREME
The Krispy Kreme chain of doughnut stores was founded in 1937 in Winston-Salem, North Carolina. The company introduced the Whole Wheat Glazed doughnut in 2007, great for folks looking to eat a healthy diet, I am sure …

53. Tucson hrs. : MST
Tucson is the second largest city in Arizona (after Phoenix). The founding father of the city was Hugh O’Conor, yet another Irishman, but one who was raised in Spain. O’Conor was a mercenary working for Spain when he authorized the construction of a military fort called Presidio San Augustín del Tucsón in 1775, which eventually grew into the city that we know today. The Spanish name “Tucsón” comes from the local name “Cuk Ṣon”, which translates as “(at the) base of the black (hill)”.

55. When the French toast? : ETE
One might spend the summer (été) under the sun (le soleil) in Paris.

Down
3. Designer Geoffrey : BEENE
Geoffrey Beene was an American fashion designer. He had an impressive list of clients that included First Ladies Lady Bird Johnson, Pat Nixon and Nancy Reagan.

4. Tropical palm : ARECA
The betel nut is something that is chewed, especially in parts of Asia. “Betel nut” is a bit of misnomer, as the nut in question is actually an Areca nut from the Areca palm. For chewing, the Areca nut is wrapped in betel leaves and the whole thing is called a “betel nut”.

5. Landlocked land with only two neighbors : NEPAL
Nepal lies to the northeast of India. Today, the state is known as the Federal Democratic Republic of Nepal. In 2008, the Communist Party of Nepal won the country’s general election. Soon after, the Assembly voted to change the form of government, moving away from a monarchy and creating a secular republic.

8. [Another arrangement of the letters in the grid] : REAR (TUSH)
“Tush”, a word for the backside, is an abbreviation of “tochus” that comes from the Yiddish “tokhes”.

9. Thessaly’s Mount ___ : OSSA
Mount Ossa in Greece is located between Mt. Pelion in the south, and the famed Mt. Olympus in the north. Mount Ossa is also known as Kissavos.

14. Core group? : ATOMIC REACTORS
In a nuclear fission reactor the reaction needs to be controlled (duh!). A fission reaction takes place because of neutron bombardment provided by radioactive elements. Control rods are inserted into the fissionable material to slow down the reaction. This slow-down is achieved because the control rods are made of material that absorbs neutrons and slows down fission.

25. ___ Mix : MEOW
We might know Meow Mix cat food because of its advertising jingle that was meowed out by a cat, with subtitles below.

26. [Another arrangement of the letters in the grid] : ERGO (THUS)
“Ergo” is the Latin word for “hence, therefore”.

36. Dim sum additive : MSG
Monosodium glutamate (MSG) is the sodium salt of a naturally-occurring,non-essential amino acid called glutamic acid. It is used widely as a flavor enhancer, particularly in many Asian cuisines. Whether or not it is harmful seems to be still under debate. I say that something produced in a test tube shouldn’t be in our food …