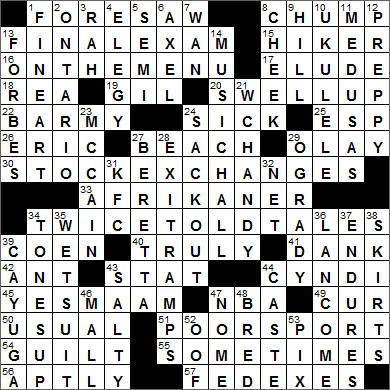 Today’s Wiki-est, Amazonian Googlies
Across
18. “Michael Collins” actor Stephen : REA
Stephen Rea is an Irish actor from Belfast. Rea’s most successful role was Fergus in 1992’s “The Crying Game”, for which performance he was nominated for the Best Actor Oscar. In “The Crying Game”, Fergus was a member of the IRA. In real life, Rea was married to IRA bomber and hunger striker Dolours Price at the time he made the movie.

19. Evans of jazz : GIL
Gil Evans was a jazz musician who collaborated with Miles Davis.

22. Bonkers, in Britspeak : BARMY
Back in the British Isles “barmy” (occasionally “balmy”) is a slang term meaning “not so sane”.

24. Onetime competitor of Mad magazine : SICK
“Sick” was a satirical magazine published from 1960 to 1980 that was by all accounts issued as a direct competitor to “Mad” magazine.

25. Gift that not everyone accepts : ESP
Extrasensory perception (ESP)

29. Procter & Gamble product line : OLAY
Oil of Olay was developed in South Africa in 1949. When Oil of Olay was introduced internationally, it was given slightly different brand names designed to appeal in the different geographies. In Ireland we know it as Oil of Ulay, for example, and in France it is Oil of Olaz.

33. Charlize Theron, e.g., by birth : AFRIKANER
Charlize Theron is an actress from South Africa who has played leading roles in Hollywood films such as “The Devil’s Advocate”, “The Cider House Rules” and my personal favorite “The Italian Job”.

34. 1837 short-story collection by Nathaniel Hawthorne : TWICE-TOLD TALES
Nathaniel’s collection of short stories called “Twice-Told Tales” earned its title as each story had previously been published in a magazine or annual.

39. Either Best Director winner of 2007 : COEN
I think it’s great to see two brothers working together and being so successful. Joel and Ethan Coen are two movie producers and directors who both live in New York City. The Coen brothers do love the movie-making business and they even married industry “insiders”. Ethan’s wife is film editor Tricia Cooke, and Joel is married to one of my favorite actresses, the lovely Frances McDormand.

41. Like sea caves : DANK
“Dank” is such a lovely word, now largely superseded by another nice word “damp”. It is thought that “dank” came into English from Scandinavia some time before the 14th century. The modern Swedish word “dank” means “moist place”.

43. Topps card tidbit : STAT
Topps was a relaunch of an older company called American Leaf Tobacco, with the Topps name used from 1938. The earlier company was in trouble because it could not get supplies of its Turkish tobacco, so it moved into another chewy industry, making bubblegum.

44. Lauper of pop : CYNDI
If you’ve ever heard Cyndi Lauper speaking, you’d know that she was from Queens, New York. She is the daughter of divorced parents, strongly influenced by a supportive mother. She was always a free spirit, and even as young teen in the mid-sixties she dyed her hair different colors and wore outlandish fashions. She was a young woman who wanted to “find herself”, and to that end she once spent two weeks alone in the woods up in Canada. Well, just with her dog.

47. ___ Jam (old arcade game) : NBA
NBA Jam is an arcade game that was introduced in 1993. It was successful enough to spawn a whole series of NBA Jam video games. Apparently is became the highest-earning arcade game of all time, and took in over $1 billion dollars in quarters.

49. Blackguard : CUR
Back in the early 1500s, a “blackguard” was someone who worked in the scullery or kitchen. The term was probably of mock-military origin, referring to shoeblacks or perhaps lower-level servants dressed in black. Nowadays, a blackguard is a lowlife, a cur.

57. Ships with speed : FEDEXES
FedEx began operations in 1973 as Federal Express, but now operates very successfully under it’s more catchy abbreviated name. Headquartered in Memphis with its “SuperHub” at Memphis International Airport, FedEx is the world’s largest airline in terms of tons of freight flown. And due to the presence of FedEx, Memphis Airport has the largest-volume cargo operation of any airport worldwide.

Down
2. Neighbor of four Great Lakes : ONTARIO
The Canadian province of Ontario is bordered by five US states:

4. Lines of grief? : ELEGY
An elegy is a mournful poem or funeral song, also known as a dirge. Perhaps the most famous elegy in the English language is that written by Thomas Gray, completed in 1750. His “Elegy Written in a Country Churchyard” is the source of many oft-quoted phrases, including:

6. Impressive way to turn up? : AXEL
An Axel is a forward take-off jump in figure skating. It was first performed by Norwegian Axel Paulsen at the 1882 World Figure Skating championships.

10. It’s played close to the chest : UKULELE
The ukulele (“uke”) originated in the 1800s and mimicked a small guitar brought to the Hawaiian Islands by Portuguese immigrants.

11. Saucer-shaped jellyfish : MEDUSAS
Medusa jellyfish are named for Medusa of Greek mythology, a monster with a tentacled head.

In Greek mythology, Medusa was one of the monstrous female creatures known as Gorgons. According to one version of the Medusa myth, she was once a beautiful woman. But she incurred the wrath of Athena who turned her lovely hair into serpents and made her face hideously ugly. Anyone who gazed directly at the transformed Medusa would turn into stone. She was eventually killed by the hero Perseus, who beheaded her. He carried Medusa’s head and used its powers as a weapon, before giving it to the goddess Athena to place on her shield.

13. Magazine that’s on the market? : FORBES
“Forbes” is a business magazine that has been published since 1917, when it was founded by B. C. Forbes and Walter Drey. The full name of the original publication was “Forbes: Devoted to Doers and Doings”.

14. America : vaudeville :: England : ___ : MUSIC HALL
The Vire is a river that flows through Normandy in France. The poets of the Vire valley were known as the “Vau de Vire”, a term that some say gave rise to our word “Vaudeville”.

21. Songwriter with the 1941 autobiography “Father of the Blues” : WC HANDY
William Christopher “W. C.” Handy was a cornet player, often known as the “Father of the Blues”. He earned this moniker although he wasn’t the first musician to play the blues, but rather as the person who took the blues into the mainstream repertoire. The 1958 movie “St. Louis Blues” is broadly based on his life.

27. Firearms company since 1526 : BERETTA
Beretta is an Italian manufacturer of firearms. Beretta is an incredibly old company that has been selling firearms since 1526! The company got a big boost of sales in the US in the eighties, when it’s Beretta 92 pistol was selected by the US Army for use as its service handgun (although it was known as the “M9 pistol by the US Army”).

The actress Betty Grable was the biggest earner for 20th Century-Fox in 1943, and in 1947 was the highest-paid entertainer in the whole country. It was said that Grable had the most beautiful legs in Hollywood. A famous photograph of her in a bathing suit made her the most popular pin-up girl of WWII.

31. Chain attached to buckets? : KFC
The famous “Colonel” of Kentucky Fried Chicken fame was Harland Sanders, an entrepreneur from Henryville, Indiana. Although not really a “Colonel”, Sanders did indeed serve in the military. He enlisted in the Army as a private in 1906 at the age of 16, lying about his age. He spent the whole of his time in the Army as a soldier in Cuba. It was much later, in the 1930s, that Sanders went into the restaurant business making his specialty deep-fried chicken. By 1935 his reputation as a “character” had grown, so much so that Governor Ruby Laffoon of Kentucky gave Sanders the honorary title of “Kentucky Colonel”. Later in the fifties, Sanders developed his trademark look with the white suit, string tie, mustache and goatee. When Sanders was 65 however, his business failed and in stepped Dave Thomas, the founder of Wendy’s. Thomas simplified the Sanders menu, cutting it back from over a hundred items to just fried chicken and salads. That was enough to launch KFC into the fast food business. Sanders sold the US franchise in 1964 for just $2 million and moved to Canada to grow KFC north of the border. He died in 1980 and is buried in Louisville, Kentucky. The Colonel’s secret recipe of 11 herbs and spices is indeed a trade secret. Apparently there is only one copy of the recipe, a handwritten piece of paper, written in pencil and signed by Colonel Sanders. Since 2009, the piece of paper has been locked in a computerized vault surrounded with motion detectors and security cameras.

32. One cast in “Jaws”? : NET
“Jaws” is a thrilling 1975 movie directed by Steven Spielberg that is based on a novel of the same name by Peter Benchley. The film has a powerful cast, led by Roy Scheider, Richard Dreyfuss and Robert Shaw. “Jaws” was perhaps the first “summer blockbuster” with the highest box office take in history, a record that stood until “Star Wars” was released two years later.

36. L’Oréal subsidiary : LANCOME
Lancôme Paris is a brand of makeup. Founded in 1935, the name Lancôme comes from the name of an old French castle, the Château de Lancosme.

43. Full of oaths : SALTY
A salty joke is a dirty joke, one that might be told by the stereotypical sailor, a “salt”.

44. Social stratum : CASTE
Many creatures organize themselves into a social structure, a phenomenon known as “eusociality”. Examples of such creatures would be ants, bees and wasps, where there are queens, workers and soldiers. The groups within such a hierarchical structure are known as castes. The word “caste” was borrowed from the class divisions in Indian society (although the word “caste” and hierarchical concept was actually introduced by the Portuguese).

47. Seward Peninsula city : NOME
Nome, Alaska has over 3,500 residents, the majority of whom are Native American. The next largest ethnic group in Nome is the white population. The origin of the name “Nome” isn’t well understood, it seems. One theory is that was a misunderstanding of the local Inupiaq word for the phrase “Where at?”