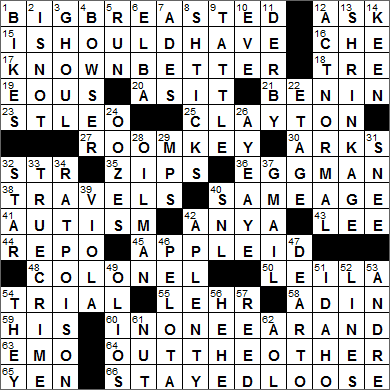 Today’s Wiki-est, Amazonian Googlies
Across
15. With 17-Across, the B-side to “A Hard Day’s Night” : I SHOULD HAVE …
(17A. See 15-Across : … KNOWN BETTER)
“I Should Have Known Better” is a Lennon-McCartney song released by the Beatles in 1964. The song is on the soundtrack of the band’s film “A Hard Day’s Night”, with the Fab Four singing it in the baggage compartment of a train. In fact, the scene was filmed in a large van, with crew members rocking it so that appeared to be a moving train. I love that movie …

16. Motorcyclist who became a rebel : CHE
Ernesto “Che” Guevara was born in Argentina, and in 1948 he started to study medicine at the University of Buenos Aires. While at school he satisfied his need to “see the world” by taking two long journeys around South America, the story of which are told in Guevara’s memoir later published as “The Motorcycle Diaries”. While travelling, Guevara was moved by the plight of the people he saw and their working conditions and what he viewed as capitalistic exploitation. In Mexico City he met brothers Raul and Fidel Castro and was persuaded to join their cause, the overthrow of the US-backed government in Cuba. He rose to second-in-command among the Cuban insurgents, and when Castro came to power Guevara was influential in repelling the Bay of Pigs Invasion and bringing Soviet nuclear missiles to the island. Guevara left Cuba in 1965 to continue his work as a revolutionary. He was captured by Bolivian forces in 1967, and was executed. Fidel Castro led the public mourning of Guevara’s death, and soon the revolutionary was an icon for many left-wing movements around the world.

18. III, now : TRE
In ancient Rome, the number three was written as “III”, in Roman numerals. In modern-day Rome, “tre” is Italian for the same number.

21. Country whose largest city is Cotonou : BENIN
The Republic of Benin is a country in West Africa. Benin used to be a French colony, and was known as Dahomey. Dahomey gained independence in 1975, and took the name Benin after the Bight of Benin, the body of water on which the country lies.

Porto-Novo is the capital city of Benin in West Africa. Porto-Novo may be the capital of the country but it isn’t the biggest city, and it isn’t even the most economically important. That honor goes to the city of Cotonou.

23. Religious leader who met with Attila the Hun : ST LEO
The first pope named Leo is now known as Pope Saint Leo the Great. Leo I is famous for meeting with the feared Attila the Hun and persuading him to turn back his invading force that was threatening to overrun Western Europe.

25. Kershaw with three Cy Young Awards : CLAYTON
Clayton Kershaw is a pitcher for the LA Dodgers. Outside of baseball, Kershaw is noted for his charitable work, especially his efforts to raise money for an orphanage in Zambia.

30. Shul fixtures : ARKS
The Torah ark is found in a synagogue, and is the ornamental container in which are stored the Torah scrolls. The word “Torah” best translates as “teaching”, I am told.

“Shul” is another word for a synagogue. “Shul” is the term mostly used in Orthodox Judaism, “synagogue” in Conservative Judaism, and “temple” in Reform Judaism.

36. Mysterious figure in “I Am the Walrus” : EGGMAN
“I Am the Walrus” is a Beatles song released in 1967. It was written by John Lennon, with the Walrus being a reference to the poem “The Walrus and the Carpenter” from Lewis Carroll’s “Through the Looking-Glass”.

38. Violates a court rule : TRAVELS
There’s a rule against traveling on a basketball court.

41. Asperger’s is a form of it : AUTISM
Hans Asperger was a pediatrician and medical professor from Austria. Dr. Asperger achieved renown for his studies of mental disorders in children, but only after his death in 1980. In the eighties there was renewed interest in his work, and Asperger Syndrome was named after him.

45. Need for an iTunes Store account : APPLE ID
An Apple ID gives access to a whole suite of Apple products, such as the iCloud and the iTunes Store. Personally, I’m no Apple guy. I use Google products and access the Google suite of products using my gmail ID.

50. Orphan in Byron’s “Don Juan” : LEILA
Lord Byron wrote the poem “Don Juan” based on the legend of Don Juan the libertine. In the poem, he created the character Leila, a 10-year-old Muslim orphan girl whom Juan rescues from the city of Ismail.

Don Juan is a flighty character who has been featured by a number of authors, poets and composers, including Molière, Byron, and Mozart. In the underlying legend, Don Juan ends up talking to the statue of the dead father of one of his conquests. Don Juan dines with the ghost of the dead man and when shaking the hand of the ghost he is dragged away to hell.

55. Glassmaker’s oven : LEHR
A lehr is a kiln used in glassmaking. Items are annealed in a lehr, meaning that they are cooled slowly so that any stress in the glass is removed. Faster cooling can cause cracks in the work.

58. Score after deuce : AD IN
In tennis, if the score reaches “deuce” (i.e. when both players have scored three points), then the first player to win two points in a row wins the game. The player who wins the point immediately after deuce is said to have the “advantage”. If the player with the advantage wins the next point then that’s two in a row and that player wins the game. If the person with the advantage loses the next point, then advantage is lost and the players return to deuce and try again. If the one of the players is calling out the score then if he/she has the advantage then that player announces “ad in” or more formally “advantage in”. If the score announcer’s opponent has the advantage, then the announcement is “ad out” or “advantage out”. Follow all of that …?

59. Holiness leader? : HIS
“His Holiness” is a term of address used for the Pope.

63. Like some angsty teens : EMO
The musical genre of “emo” originated in Washington D.C. in the 80s, and takes its name from “emotional hardcore”. Not my cup of tea …

Down
3. Halloween spirit : GHOUL
Our word “ghoul” comes from the Arabic “ghul”, the name for an evil spirit that feeds on corpses.

4. Main enemy in the Mario games : BOWSER
Bowser is a turtle-like character who is the main antagonist in Nintendo’s “Mario Bros” video games.

6. Island due south of Livorno : ELBA
I had a lovely two-week vacation in Tuscany once, including what was supposed to be a two-night stay on the island of Elba. I had envisioned Elba as a place full of history, and maybe it is, but it is also overrun with tourists who use it as a beach getaway. We left after one day and we won’t be going back again …

Livorno is a port city on the west coast of Italy. The city is often called “Leghorn” in English and gave its name to the leghorn breed of chicken, and by extension to the cartoon character known as Foghorn Leghorn.

8. Stand-up routines : SHTICKS
A “shtick” is a routine, a bit, a piece of entertainment. It comes from the Yiddish “shtick”, which has the same meaning and derives from the Middle High German word “stücke”, the word for “piece”.

9. Schoolyard report? : TATTLE
Something described as “tattletale” is revealing, it gives away a secret. The term is a combination of “tattle” and “tale”, and is probably patterned on the similar word “telltale”. “To tattle” means to tell secrets.

26. Roger’s cousin? : AYE AYE
The term “roger”, meaning “yes” or “acknowledged”, comes from the world of radiotelephony. The British military used a phonetic alphabet in the fifties that included “Roger” to represent the letter “R”. As such, it became customary to say “Roger” when acknowledging a message, with R (Roger) standing for “received”.

Prime Minister’s Questions is a 30-minute session held on Wednesdays in the British House of Commons. The questions are posed by Members of Parliament, and the whole session can get extremely raucous.

31. Dagger of yore : SNEE
“Snick or snee” is the name given to cut and thrust while fighting with a knife. The phrase is rooted in a pair of Dutch words and it gave its name to a “snee”, a light sword-like knife.

32. Critical unit? : STAR
A critic might rate say a show or play with a number of stars.

37. Tech service with over half a billion users : GMAIL
Gmail is a free webmail service provided by Google, and my favorite of the free email services. Gmail made a big splash when it was introduced in 2007 because it offered a whopping 1GB of storage whereas other services offered a measly 2-4MB on average.

39. Cousin of a contrabass : VIOLA
A contrabass is a very low-pitched musical instrument, the most common example of which is the double bass. It is not necessarily a stringed instrument, as “contrabass” refers to the low pitch rather than the type of instrument. So, there is a contrabass clarinet and a contrabass flute.

46. Jai alai ball : PELOTA
The essential equipment in the game of jai alai is the pelota (ball) and the cesta (wicker scoop).

49. Blends : OLIOS
“Olio” is a term meaning a hodgepodge or a mixture, coming from the mixed stew of the same name. The stew in turn takes its name from the Spanish “olla”, the clay pot used for cooking.

57. College from which Steve Jobs dropped out : REED
Steve Jobs certainly was a business icon in Silicon Valley. I don’t think it is too surprising to learn that the brilliant Jobs didn’t even finish his college education, dropping out of Reed College in Oregon after only one semester. Steve Jobs co-founded Apple in 1976, but in 1985 he was basically fired from his own company during the computer sales slump of the mid-eighties. Jobs then founded NeXT Computer, a company focused on supplying workstations to the higher education and business markets. Apple purchased NeXT in 1996, and that’s how Jobs found himself back with his original company.