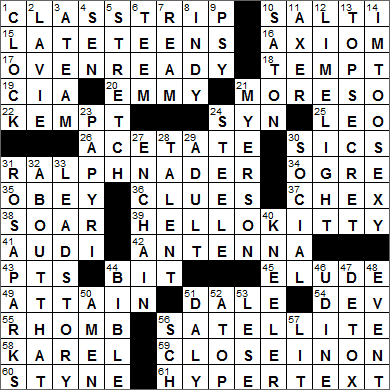 Today’s Wiki-est, Amazonian Googlies
Across
10. Pact signed by Nixon : SALT I
There were two rounds of Strategic Arms Limitation Talks (SALT) between the US and the Soviet Union, and two resulting treaties (SALT I & SALT II). The opening round of SALT I talks were held in Helsinki as far back as 1970, with the resulting treaty signed by President Richard Nixon and General Secretary Leonid Brezhnev in 1972.

15. Nancy Drew never left hers behind : LATE TEENS
I loved the Nancy Drew mysteries as a kid (I know, as a boy I “shouldn’t” have been reading girls’ books!). The Nancy Drew stories were written by a number of ghost writers, although the character was introduced by Edward Stratemeyer in 1930. Nancy Drew’s boyfriend was Ned Nickerson, a college student from Emerson.

19. Org. in “Argo” : CIA
“Argo” is a 2012 movie that is based on the true story of the rescue of six diplomats hiding out during the 1979 Iran hostage crisis. The film was directed by and stars Ben Affleck and is produced by Grant Heslov and George Clooney, the same pair who produced the excellent “Good Night, and Good Luck”. I saw “Argo” recently and recommend it highly, although I found the scenes of religious fervor pretty frightening …

20. It depicts a winged woman holding an atom : EMMY
The Emmy Awards are the television equivalent of the Oscars in the world of film, the Grammy Awards in music and the Tony Awards for the stage. Emmy Awards are presented throughout the year, depending on the sector of television being honored. The most famous of these ceremonies are the Primetime Emmy Awards and the Daytime Emmy Awards. The distinctive name of “Emmy” is a softened version of the word “immy”, the nickname given to the video camera tubes found in old television cameras. The Emmy statuette was designed by television engineer Louis McManus in 1948, and depicts a woman holding up an atom. McManus used his wife as a model for the woman.

22. Not mussed : KEMPT
The word “unkempt” means “disheveled, not well-combed”. It derives from the Old English word “cemban” meaning “to comb”. The opposite to the more common “unkempt” is … “kempt”.

25. Constellation near Ursa Major : LEO
The constellation called Leo can be said to resemble a lion. Others say that it resembles a bent coat hanger. “Leo” is the Latin for “lion”, but I’m not sure what the Latin is for “coat hanger” …

The constellation called Ursa Major (Latin for “Larger Bear”) is often just called the Big Dipper because of its resemblance to a ladle or dipper. Ursa Major also resembles a plow, and that’s what we usually call the same constellation back in Ireland: the “plough”.

26. Art film? : ACETATE
An “acetate” is a transparency used on a projector onto which one can write or draw. It is called an “acetate” because it is usually made out of cellulose acetate.

31. Who said “Power has to be insecure to be responsive” : RALPH NADER
Ralph Nader has run as a third-party candidate for the office of President of the United States four times now, in every election from 1996 to 2008. Nader’s name was first first linked with the presidential race in 1971, when the famous Dr. Benjamin Spock offered to stand aside as candidate in the 1972 race if Nader would agree to run, but he declined.

37. It may be thrown in the mix : CHEX
The original Chex cereal was introduced in 1937 by Ralston Purina. Ralston Purina had a logo with a checkerboard square on it, which gave the pattern to the cereal as well as its name. Chex used characters from the “Peanuts” comic strip in its advertising for many years.

41. “Truth in engineering” sloganeer : AUDI
The Audi name has an interesting history. The Horch company was founded by August Horch in 1909. Early in the life of the new company, Horch was forced out of his own business. He set up a new enterprise and continued to use his own name as a brand. The old company sued him for using the Horch name so a meeting was held to choose something new. Horch’s young son was studying Latin in the room where the meeting was taking place. He pointed out that “Horch” was German for “hear” and he suggested “Audi” as a replacement, the Latin for “listen”.

42. Where the waves come in? : ANTENNA
An antenna’s job is to convert electrical power into radio waves, and radio waves into an electrical signal. The first antennas were built by the German physicist Heinrich Hertz in 1888.

54. Part of HUD: Abbr. : DEV
The Department of Housing and Urban Development (HUD) has its roots in the “Great Society” program of President Lyndon Johnson. HUD’s mission is to address the housing needs of the citizenry at the national level. HUD can provide mortgage insurance to help people become homeowners and also provide rental subsidies to lower-income families. HUD also is responsible for enforcement of Federal Fair Housing laws.

55. Diamond, e.g. : RHOMB
Rhomb is an alternative name for a rhombus, a 4-sided figure with sides of equal length, but angles at the corners that aren’t right angles. So, that would make a rhombus a “diamond” shape.

56. Triton, to Neptune : SATELLITE
Triton is the largest moon of Neptune, and is named after the Greek sea god (Neptune is the Roman sea god). Triton is unique in our solar system in that it has a “retrograde orbit”, meaning that it orbits Neptune in the opposite direction to the planet’s rotation.

58. Reisz who directed “The French Lieutenant’s Woman” : KAREL
Karel Reisz was a British film director who had fled his native Czechoslovakia in 1938. Reisz directed some great films that are probably better known on the other side of the Atlantic, such as “Saturday Night and Sunday Morning” (1960), “This Sporting Life” (1963) and “Isadora” (1968). His most successful movie is “The French Lieutenant’s Woman”, which was a later project released in 1981. Reisz was married to Betsy Blair, the former wife of Gene Kelly.

60. “Make Someone Happy” composer : STYNE
Jule Styne was an English songwriter who made a name for himself in America with a series of popular musicals. Styne wrote a number of famous songs including “Don’t Rain on My Parade” from “Funny Girl”, “Diamonds Are a Girl’s Best Friend” from “Gentlemen Prefer Blondes”, and “Everything’s Coming Up Roses” from “Gypsy”.

“Make Someone Happy” is a show tune from the 1960 musical “Do Re Mi”, with music by Jule Styne. The original Broadway production of the show starred the great Phil Silvers.

61. It connects two pages : HYPERTEXT
The World Wide Web (WWW) was effectively the invention of British computer scientist Tim Berners-Lee. The key to Berner-Lee’s invention was bringing together two technologies that already existed: hypertext and the Internet. I for one am very grateful …

2. Allegorical painting from Picasso’s Blue Period : LA VIE
Picasso’s Blue Period refers to his works completed between 1901 and 1904. All his paintings in the era were basically monochromatic, using different shades of blue. HIs best-known work from the period is “The Old Guitarist”, which you can see at the Art Institute of Chicago.

Picasso’s 1903 oil painting “La Vie” is part of the permanent collection of the Cleveland Museum of Art.

8. Ark finder, familiarly : INDY
“Raiders of the Lost Ark” is, in my humble opinion, the best of the Indiana Jones franchise of movies. This first Indiana Jones film was released in 1981, produced by George Lucas and directed by Steven Spielberg. Harrison Ford was Spielberg’s first choice to play the lead, but Lucas resisted as he was concerned that he would be too closely associated with the actor (as Ford played Han Solo in “Star Wars”, and also appeared in Lucas’s “American Graffiti”). Tom Selleck was offered the role but couldn’t get out of his commitments to “Magnum, P.I.” Eventually Spielberg got his way, and that was a good thing I’d say …

12. Star’s spot : LIMELIGHT
LImelight was an early form of stage lighting that was also known as Drummond Light. The illumination came from the burning of quicklime (calcium hydroxide), hence the name. Although limelights are a thing of the past, the term “in the limelight” is still used when describing someone in the public eye.

14. #1 hit on the soundtracks for “Grumpy Old Men” and “Beverly Hills Chihuahua” : I’M TOO SEXY
The English band called Right Said Fred is named for a famous song back in the UK that was a hit for comic actor Bernard Cribbins in 1962. Right Said Fred’s best known hit is “I’m Too Sexy”. Fun song …

21. Former Miss America who ran for the U.S. Senate in 1980 : MYERSON
Bess Myerson won the Miss America title in 1945. Her win was particularly significant in that it came just after the end of World War II when the Holocaust was very much in the public psyche. Myerson was the first Jewish person to be crowned Miss America, and so her win was viewed as important statement about the status of the Jewish community in America at the time. Later in her life, Myerson became active in politics and made an unsuccessful bid for the US Senate in 1980.

23. Early writing materials : PAPYRI
The papyrus plant was commonly found in the Nile Delta of Europe. The pith of the plant was used to make a thick, paper-like material on which one could write. This writing material, which became known as papyrus, became a competitor for the most popular writing surface of the day known as parchment, which was made from animal skins.

30. Bee, e.g. : SOCIAL
Back in 18th-century America, when neighbors would gather to work for the benefit of one of their group, such a meeting was called a “bee”. The name “bee” was an allusion to the social nature of the insect. In modern parlance, a further element of entertainment and pleasure has been introduced, for example in a “quilting bee”, or even a “spelling bee”.

31. She wouldn’t take an affront sitting down : ROSA PARKS
Rosa Parks was one of a few brave women in days gone by who refused to give up her seat on a bus to a white woman. It was the stand taken by Rosa Parks on December 1, 1955 that sparked the Montgomery, Alabama Bus Boycott. President Clinton presented Ms. Parks with the Presidential Medal of Freedom in 1996. When she died in 2005, Rosa Parks became the first ever woman to have her body lie in honor in the US Capitol Rotunda.

40. Prie-dieu feature : KNEELER
Prie-dieu literally means “pray (to) God” in French. A prie-dieu is basically a padded kneeler, with an armrest in front and a shelf on which one placed books of prayer.

46. Italian city near the Slovenian border : UDINE
Udine is a city in the very northeast of Italy located about 25 miles from the border with Slovenia.

50. Famous last word : AMEN
The word “amen” is translated as “so be it”. “Amen” is said to be of Hebrew origin, but it is likely to be also influenced by Aramaic and Arabic.

51. New Year’s Eve ball-drop commentator beginning in 2003 : DALY
Carson Daly is a radio and television personality who is perhaps best known today as host of the reality show “The Voice”. If you stay up late enough on New Year’s Eve, you might also know him from NBC’s “New Year’s Eve with Carson Daly”.

56. Duke, e.g.: Abbr. : SCH
Duke University was founded in 1838 as Brown’s Schoolhouse. The school was renamed to Trinity College in 1859, and to this day the town where the college was located back then is known as Trinity, in honor of the school. The school was moved in 1892 to Durham, North Carolina in part due to generous donations from the wealthy tobacco industrialist Washington Duke. Duke’s donation required that the school open its doors to women, placing them on an equal footing with men. Trinity’s name was changed to Duke in 1924 in recognition of the generosity of the Duke family.