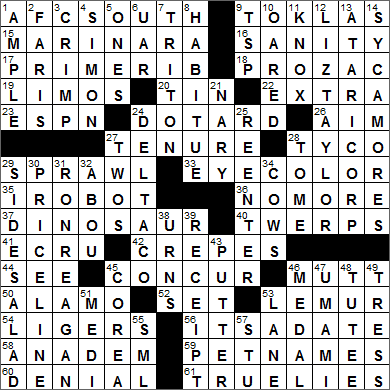 Today’s Wiki-est, Amazonian Googlies
Across
1. Colts’ division, for short : AFC SOUTH
The Indianapolis Colts professional football team has been in Indiana since 1984. The team traces its roots back to the Dayton Triangles, one of the founding members of the NFL created in 1913. The Dayton Triangles relocated and became the Brooklyn Dodgers in 1930, and then the Brooklyn Tigers in 1944. The team merged with the Boston Yanks in 1945, so then played in Boston. The Yanks were moved to New York in 1949, and then to Dallas in 1952 as the Dallas Texans. The Texan franchise moved to Baltimore in 1953, forming the Colts. The Colts made their last move, to Indianapolis, in 1984. Whew!

9. “Murder in the Kitchen” writer : TOKLAS
Alice B. Toklas was the confidante and lover of author Gertrude Stein, whom she met in Paris in 1907. The couple stayed together until Stein passed away in 1946. Famously, Toklas and Stein hosted gatherings that were attended by authors and writers who were to be extremely influential in the modernism movement. Among the list of regular attendees were Pablo Picasso, Ernest Hemingway, F. Scott Fitzgerald, Sinclair Lewis and Henri Matisse.

15. Dip for mozzarella sticks : MARINARA
Italians use the term “marinara” not for a sauce, but in the name of a recipe that includes a tomato-based sauce. For example, “spaghetti alla marinara” would be a spaghetti dish, served “mariner’s style”. The tomato sauce that we call “marinara” is called “salsa di pomodoro” in Italy.

16. “A cozy lie,” per Susan Sontag : SANITY
Susan Sontag was a writer and political activist from New York City. Sontag wrote extensively on a number of subjects, including photography. She spent the last decade of her life in a relationship with renowned photographer Annie Leibovitz.

18. Paxil alternative : PROZAC
The most commonly prescribed antidepressants in the US (in 2010 anyway) are:

19. Line at a movie premiere, maybe : LIMOS
The word “limousine” actually derives from the French city of Limoges. The area around Limoges is called the Limousin, and it gave its name to a cloak hood worn by local shepherds. In early motor cars, a driver would sit outside in the weather while the passengers would sit in the covered compartment. The driver would often wear a limousin-style protective hood, giving rise to that type of transportation being called a “limousine”. Well, that’s how the story goes anyway …

23. FiveThirtyEight owner : ESPN
FiveThirtyEight is a website that publishes compiled polling date during election cycles. The site takes its name from from the total number of electors in the US electoral college. FiveThirtyEight has been owned by ESPN since 2013. One has to wonder how that fits with the rest of the ESPN portfolio …

24. Senile sort : DOTARD
A dotard is a person who is in his or her dotage, someone who has become senile.

27. Fire safety? : TENURE
A job in a university that is described as “tenure-track” is one that can lead to a tenured position. A tenured position is a “job for life”. A person with tenure can only be dismissed for cause.

28. Toy company acquired by Mattel in 1997 : TYCO
The Tyco brand of toys was founded in 1926 as Mantua Metal Products by John Tyler. The first products made were scale model trains using die-cast metal. The company introduced the Tyco brand in the fifties, with “Tyco” standing for “Tyler Company”.

Mattel is the world’s largest toy manufacturer. Mattel was founded by Harold “Matt” Matson and Elliot Handler in 1945, and they chose the company name by combining “Matt” with “El-liot” giving “Matt-el”.

33. Violet, for 12-Down : EYE COLOR
Famously, the actress Elizabeth Taylor had a deep blue eye color that sometimes appeared to be violet. Taylor also had double eyelashes because of a mutation in her genes.

35. Classic work of fiction that popularized the Three Laws : I, ROBOT
Science fiction author Isaac Asimov wrote a marvelous collection of short stories called “I. Robot”. In the stories, he made repeated reference to the Three Laws of Robotics, which he introduced in the story “Runaround”, first published in 1942. The three laws are:

41. Almond-ish hue : ECRU
The shade called ecru is a grayish, yellowish brown. The word “ecru” comes from French and means “raw, unbleached”. “Ecru” has the same roots as our word “crude”.

42. Bistro orders : CREPES
“Crêpe” is the French word for “pancake”.

50. Budget alternative : ALAMO
The third largest car rental company right now is Alamo, a relative newcomer founded in 1974. Alamo made inroads (pun intended!) into the market by popularizing the idea of “unlimited mileage”.

The Budget Rent a Car company started out in 1958 with the intent of undercutting the existing price of renting a car at airports. Budget was founded by Morris Mirkin. Mirkin enlisted Julius Lederer as a co-founder the following year. Lederer was the husband of newspaper columnist “Ann Landers”.

53. King Julien of the “Madagascar” films, e.g. : LEMUR
Lemurs are the most unusual-looking creatures, native to the island of Madagascar off the east coast of Africa. With their white fur and dark eyes that are very reflective at night, they have a “ghostly” appearance. Indeed, the animals takes their name from Roman mythology in which “lemures” were spirits of the restless dead.

58. Garland of old : ANADEM
An anadem is a wreath or garland worn around the head, derived from the Greek word for “to bind up”.

60. First of the five stages of grief : DENIAL
Swiss psychiatrist Elisabeth Kübler-Ross published a book called “On Death and Dying” in 1969. In this book she proposed a five-step model to describe the emotions experienced by patients after they are given a fatal diagnosis. That same model is often extended to describe the series of emotions experienced by survivors after losing a family member or inimate friend. In this context, the series is referred to as “the five stages of grief”.

61. Schwarzenegger movie with an oxymoronic title : TRUE LIES
“True Lies” is a really, really entertaining action-comedy film from 1994 starring Arnold Schwarzenegger and the wonderful Jamie Lee Curtis. The film is actually a remake of a French film called “La Totale!”. Tom Arnold has a supporting role and does a surprisingly good job, I think.

Arnold Schwarzenegger was born in Graz in Austria, the son of the local police chief. Schwarzenegger’s family name translates into the more prosaic “black plough man”.

Down
2. Actress Anna of “Mom” : FARIS
I had no idea who Anna Faris was until I just looked her up online. It turns out that she is one of the stars in the sitcom “Mom”, alongside the fabulous Allison Janney.

4. Bespectacled chipmunk : SIMON
Alvin and the Chipmunks is a cartoon musical group that was created for the recording of a novelty song in 1958 called “The Chipmunk Song (Christmas Don’t Be Late)”. The three Chipmunks (Alvin, Simon and Theodore) were all voiced by singer Ross Bagdasarian, Sr. but with a speedy playback to create high-pitched voices.

5. Register space : ONES
There is a compartment for ones (one-dollar bills) in a cash register.

6. Grp. once led by Nasser : UAR
The United Arab Republic (UAR) was a union between Egypt and Syria made in 1958 and dissolved in 1961 when Syria pulled out of the arrangement.

7. Moon photographed by Voyager 2 in 1989 : TRITON
Triton is the largest moon of Neptune, and is named after the Greek sea god (Neptune is the Roman sea god). Triton is unique in our solar system in that it has a “retrograde orbit”, meaning that it orbits Neptune in the opposite direction to the planet’s rotation.

The NASA space probe Voyager 2 was launched in 1977 and completed its primary mission in 1989, after having encountered Neptune and its moons. Voyager 2 is now engaged in a secondary interstellar mission, and is scheduled to leave our solar system some time after 2016.

8. Regular : HABITUE
A “habitué” is someone who frequents a particular spot. “Habituer” is the French word for “to accustom”.

11. Washington’s first secretary of war : KNOX
Henry Knox was the chief artillery officer in the Continental Army, and a friend of General George Washington. Knox became the first Secretary of War in President Washington’s cabinet.

13. Onetime 2600 Jr. maker : ATARI CORP
At one point, the electronics and video game manufacturer Atari was the fastest growing company in US history. However, Atari never really recovered from the video game industry crash of 1983.

Expedia is one of the largest Internet-based travel companies, and has a site where you can book airline tickets and reserve hotel rooms and rental cars. I use Expedia a lot because I am an AARP member, and the AARP Travel website is powered by the Expedia search engine. In my travels I’ve found by comparison shopping that the AARP Travel site often has the best prices for hotel rooms.

31. Former Air America radio host : RON REAGAN
Ron Reagan’s views couldn’t be any further from his father’s, I think. Before Air America went bust, he had a daily 3-hour spot, and these days he makes frequent appearances on MSNBC. Reagan is also a good dancer, and for a while was a member of the Joffrey Ballet.

32. “___ Ben Adhem” : ABOU
Abou Ben Adhem, also known as Ibrahim Bin Adham, was an Arab Muslim saint. He was made famous in the western world with the publication in 1838 of the poem “Abou Ben Adhem” that was composed by the English poet James Henry Leigh Hunt.

34. Daunts : COWS
The verb “to cow” means to intimidate, to scare. The exact etymology of the term seems unclear.

38. Some Bronze Age artifacts : URNS
Ancient societies can be classified by the “three-age system”, which depends on the prevalence of materials used to make tools. The three ages are:

45. Jazz fusion artist with an “Elektric Band” : COREA
Chick Corea is an American jazz pianist. Corea is noted for his work in the area of jazz fusion, as well as for his promotion of Scientology.

47. Supposed “fifth taste” : UMAMI
Umami is one of the five basic tastes, along with sweet, sour, bitter and salty. “Umami” is a Japanese word used to describe “a pleasant savory taste”. Umami was proposed as a basic taste in 1908, but it wasn’t until 1985 that the scientific community finally accepted it as such.

51. Start to care? : MEDI-
President Johnson introduced a set of programs in the mid-sixties that were designed to eliminate racial injustice and domestic poverty. The president called these programs “the Great Society”. Some of the Great Society programs have survived the ravages of time, such as Medicare, Medicaid and the Older Americans Act.

– A friend of band member Tom Fogarty, named Credence Newball (to give “Creedence”)
– A TV advertisement for Olympia beer (to give “clear water”)
– The four members of the band renewing their commitment to the group (to give “revival”)