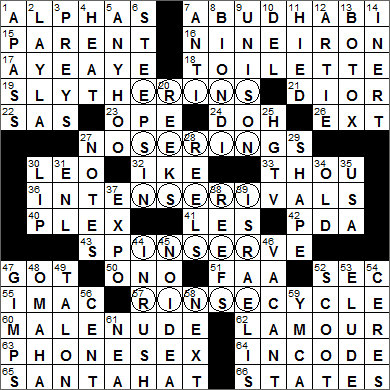 CROSSWORD SETTER: Byron Walden
THEME: Rinse Cycle … each of today’s themed answers contains a five-letter sequence of circled letters that is an anagram of the word RINSE. In fact, we CYCLE through the letters in the word RINSE, moving from top to bottom, moving the letter at the end of the sequence to the beginning:

19A. Draco Malfoy’s housemates in the Harry Potter books : SLYTHERINS
27A. Some punk accessories : NOSE RINGS
36A. Red Sox and Yankees, e.g. : INTENSE RIVALS
43A. Tricky way to put a ball in play : SPIN SERVE
57A. Part of washing … or what’s exhibited by the shaded letters from top to bottom : RINSE CYCLE

Today’s Wiki-est, Amazonian Googlies
Across
7. Mideast capital : ABU DHABI
Abu Dhabi is one of the seven Emirates that make up the federation known as the United Arab Emirates (UAE). The two largest members of the UAE (geographically) are Dubai and Abu Dhabi, the only two of the seven members that have veto power over UAE policy. Before 1971, the UAE was a British Protectorate, a collection of sheikdoms. The sheikdoms entered into a maritime truce with Britain in 1835, after which they became known as the Trucial States, derived from the word “truce”.

16. Bump-and-run club : NINE IRON
In the world of golf, a “bump and run” is similar to a chip shot. It is a low-trajectory shot that is intended to get the ball rolling along the fairway and onto the green.

18. Personal grooming : TOILETTE
A French person when dressing is said to be attending to his or her “toilette”.

19. Draco Malfoy’s housemates in the Harry Potter books : SLYTHERINS
In the “Harry Potter” series of books, the Hogwarts School of Witchcraft and Wizardry is divided into four houses:

Draco Malfoy is one of the regular “bad guys” in the Harry Potter series. Malfoy is one of Potter’s fellow students, the one who sneers a lot. Draco’s father is Lucius Malfoy, a character who becomes more and more relevant as the storyline in the series of books progresses.

21. Early Pierre Cardin employer : DIOR
Christian Dior was a French fashion designer. As WWII approached, Dior was called up by the French military, drawing a temporary halt to his career in fashion. He left the army in 1942 and for the duration of the war designed clothes for wives of Nazi officers and French collaborators. After the war his designs became so popular that he helped reestablish Paris as the fashion center of the world.

22. Carrier with the EuroBonus frequent flier program : SAS
SAS was formerly known as Scandinavian Airlines System and is the flag carrier of three countries: Denmark, Norway and Sweden. SAS is based at Stockholm Arlanda Airport located just north of the Swedish capital.

24. “Stupid me!” : D’OH!
“The Simpsons” is one of the most successful programs produced by the Fox Broadcasting Company. Homer Simpson’s catchphrase is “D’oh!”, which became such a famous exclamation that it has been included in the Oxford English Dictionary (OED) since 2001. “D’oh!” can be translated as “I should have thought of that!”

30. White House chief of staff on “The West Wing” : LEO
In “The West Wing”, Leo McGarry was played very ably by John Spencer. If you haven’t seen them, the early seasons of “The West Wing” are just fabulous. I think I learned so much about the workings of the American government through this TV show.

36. Red Sox and Yankees, e.g. : INTENSE RIVALS
The Boston Red Sox is one of the most successful Major League Baseball teams and so commands a large attendance, but only when on the road. The relatively small capacity of Boston’s Fenway Park, the team’s home since 1912, has dictated that every game the Red Sox has played there has been a sell out since May of 2003.

The New York Yankees baseball team has the nickname “the Bronx Bombers”. The nickname reflects where the team plays (the Bronx) and the team’s reputation for hitting (bombers). The New York Yankees were the first team to retire a uniform number, doing so on July 4, 1939. That day they retired the number 4 in honor of Lou Gehrig.

41. “___ Justes” (Albert Camus play) : LES
The 1949 Albert Camus play called “Les Justes” has a title that is usually translated as “The Just Assassins”, although a more literal meaning would be “The Just” or “The Righteous”.

42. Making out on the subway, e.g., for short : PDA
PDA is an abbreviation for “public display of affection”.

51. Agcy. whose future is up in the air? : FAA
The Federal Aviation Administration (FAA) was set up in 1958 (as the Federal Aviation Agency). The agency was established at that particular time largely in response to an increasing number of midair collisions. The worst of these disasters had taken place two years earlier over the Grand Canyon, a crash between two commercial passenger airplanes that resulted in 128 fatalities.

60. “David” or “The Thinker” : MALE NUDE
When Michelangelo’s famous statue of David was unveiled in 1504, it was at a time when the city-state of the Florentine Republic was threatened by rival states (including Rome). The statue depicts David after he has decided to fight Goliath, and the subject is sporting what is described as a “warning glare”. David was originally placed outside the Palazzo della Signoria, the seat of government in Florence, and that warning glare was directed very deliberately in the direction of its enemy, Rome. The original statue of David can be seen in the Accademia Gallery in Florence, where it has resided since 1873. There is a replica of the statue in its original location in the public square outside of the Palazzo della Signoria.

62. Big name in western literature : L’AMOUR
Louis L’Amour was a very successful author of Western novels that he called “frontier stories”. L’Amour probably sold more books in the Western genre than anyone else in the history of the genre.

Down
2. 1971 rock classic inspired by a 12th-century Persian poem : LAYLA
“Layla” is one of the great rock anthems of the seventies, released by Derek and the Dominos in December of 1970. It is a masterpiece of composition, with the first half of the song a great vehicle for the guitar-playing talents of Eric Clapton. The second half is a beautifully melodic piano coda (a coda … taking up half the length of the track!). To top things off we have the “unplugged” version recorded by Clapton in 1992, a fabulous and inventive variation on the original.

4. Early race : HEAT
The term “heat”, meaning a qualifying race, dates back to the 1660s. Originally a heat was a run given to a horse to prepare it for a race, to “heat” it up.

8. Swimmer Matt who won eight Olympic gold medals : BIONDI
American swimmer Matt Biondi competed in the 1984, 1988 and 1992 Olympic Games, and came away with a total of eleven medals.

10. ___ Norte County, Cal. : DEL
Del Norte County is located in the very northwest corner of California, on the Pacific coast and right on the border with Oregon.

12. ___ Ziff, “The Simpsons” character voiced by Jon Lovitz : ARTIE
On the animated television show “The Simpsons”, there is a recurring character called Artie Ziff. Artie is an Internet entrepreneur who is infatuated with his former classmate: Marge Simpson. Ziff is voiced by comic actor Jon Lovitz.

13. Shot in the crease? : BOTOX
Botulinum toxin is produced by the bacterium Clostridium botulinum. The toxin is a protein that can cause botulism, an extremely dangerous illness in humans and animals. Botulinum toxin is sold under the trade name Botox. Botox is used therapeutically and in cosmetic applications to weaken muscles, perhaps muscles that are in uncontrollable spasm. The cosmetic application involves the paralyzing of facial muscles in order to eliminate or reduce wrinkles, at least for a few months.

48. Home of Warren Buffett : OMAHA
Warren Buffett is one of my heroes. Despite being the third wealthiest man in the world, he lives a relatively frugal and modest life. He also has a very Jeffersonian attitude towards the role his wealth plays within his family. He has set up his estate so that his children get enough money to be independent, but the vast majority of his assets are going to charity, both before and after he dies.

49. Fish hook? : TALON
A “talon” is a claw of a bird of prey. The term ultimately derives from “talus”, the Latin word for “ankle”.

54. Dwarf planet orbited by NASA’s Dawn in 2015 : CERES
Ceres is the smallest dwarf planet in our solar system. Ceres was discovered in 1801 and is the largest body in the asteroid belt. For fifty years Ceres was classified as the eighth planet circling our sun. The Dawn space probe launched by NASA entered Ceres orbit in March 2015, becoming the first mission to study a dwarf planet at close range.

59. Where “you can hang out with all the boys,” in song : YMCA
“YMCA” was released in 1978 by Village People and has been adopted as an anthem by the gay community. The song was written by Victor Willis, a straight member of the mostly gay band, and he clarifies that the lyrics are extolling the virtues of the “YMCA” as a source of recreation for black urban youth. I think he might have been winking when he said that …