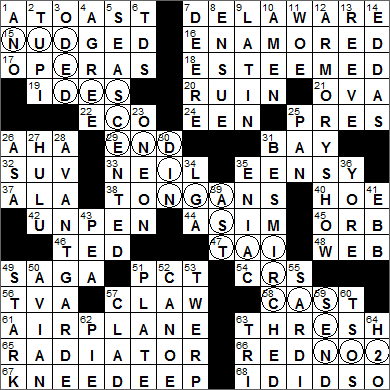 CROSSWORD SETTER: Jacob Stulberg
THEME: Duchamp Work … we have a staircase of sorts running through the grid (circled letters in my grid, shaded in print). The letters in that “staircase” spell out NUDE DESCENDING A STAIRCASE, NO. 2, which is a famous 1912 painting by Marcel Duchamp:

Today’s Wiki-est, Amazonian Googlies
Across
7. With 31-Across, Cape May’s locale : DELAWARE
(31A. See 7-Across : BAY)
Delaware Bay is the estuary of the Delaware River, although numerous other small rivers and streams do empty into it as well. The northern side of the bay is defined by Cape May, and the southern side by Cape Henlopen.

16. Smitten : ENAMORED
“Smitten” is a past participle of “smite” meaning “to inflict a heavy blow”. We tend to use “smitten” to mean “affected by love, love-struck”.

17. “Orlando” and “Otello” : OPERAS
Orlando is an opera written by George Frideric Handel that was first performed in 1733 in London. The title character is a knight who falls in love with a pagan princess, who in turn falls in love with another man. The role of Orlando was written specifically for an alto castrato called Seresino, who had been castrated at the age of thirteen. The same part is often played today by a mezzo-soprano.

32. Navigator, e.g. : SUV
The Lincoln SUV is a luxury SUV manufactured by Ford. The Navigator is basically a spruced-up Ford Expedition.

33. 2015 Oscars host ___ Patrick Harris : NEIL
Neil Patrick Harris got his big break very early in his career, playing the title role in television’s “Doogie Howser, M.D.” More recently he played a lead roles on the sitcom “How I Met Your Mother”, portraying the shallow womanizer Barney Stinson. Harris is also quite the magician and serves on the Board of Directors of Hollywood’s Magic Castle, a nightclub for magicians and magic enthusiasts.

38. Members of an island kingdom : TONGANS
The Kingdom of Tonga is made up of 176 islands in the South Pacific, 52 of which are inhabited and scattered over an area of 270,000 square miles. Tonga was given the name Friendly Islands in 1773 when Captain James Cook first landed there, a reference to the warm reception given to the visitors.

THOU orb aloft full-dazzling! thou hot October noon!
Flooding with sheeny light the gray beach sand,
The sibilant near sea with vistas far and foam,
And tawny streaks and shades and spreading blue;
O sun of noon rufulgent! my special word to thee.

Walt Whitman is considered one of the greatest American poets. He was born in 1819 on Long Island, and lived through the American Civil War. Whitman was a controversial character, even during his own lifetime. One view that he held was that the works attributed to William Shakespeare were not actually written by the Bard of Avon, but rather by someone else, or perhaps a group of people.

46. Generic Guy of “Dilbert” : TED
“Dilbert” is a comic strip written by Scott Adams, a “neighbor” of mine here in the Bay Area, and the owner of a nice restaurant down the end of my street.

56. New Deal corp. : TVA
The Tennessee Valley Authority (TVA) has to be one of America’s great success stories when it comes to economic development. Created in 1933, the TVA spearheaded economic development in the Tennessee Valley at the height of the Great Depression. Central to the success was the federally-funded construction of flood-control and electricity-generation facilities.

58. Playbill listing : CAST
I get quite a kick out of reading the bios in “Playbill” as some of them can be really goofy and entertaining. “Playbill” started off in 1884 in New York as an in-house publication for just one theater on 21st St. You can’t see any decent-sized production these days anywhere in the United States without being handed a copy of “Playbill”.

61. Film whose sequel is subtitled “The Sequel” : AIRPLANE!
The 1980 movie “Airplane!” has to be one of the zaniest comedies ever made. The lead roles were Ted Striker (played by Robert Hays) and Elaine Dickinson (played by Julie Hagerty). But it was Leslie Nielsen who stole the show, playing Dr. Barry Rumack. That’s my own humble opinion of course …

63. Separate the seeds from : THRESH
Years ago I was taking a tour of a beautiful Elizabethan manor house in England, and was told a little “threshing” story by the guide as we stood in one of the rooms. She reminded us that threshing was the removal of seeds from chaff, and told us that back in the day the “chaff” was sometimes called the “thresh”. Thresh would be used on the floors, particularly in the kitchen areas where it would soak up spills and provide some thermal insulation, much as sawdust was used in my favorite pubs many moons ago. She pointed to two slots at the bottom of the door jambs where she said a low board was placed upright on the floor, to hold the thresh in the room. The board was called a “thresh-hold”, giving us our contemporary word “threshold”. I am not sure if all of that is really true, but it makes a nice story.

2. Brazilian people : TUPI
The Tupi people were an ethnic group indigenous to Brazil who who inhabited most of Brazil’s coastline. The Tupi were all but annihilated from the 16th century onwards by Portuguese colonists.

7. Company with a harrowing history? : DEERE
John Deere invented the first commercially successful steel plow in 1837. Prior to Deere’s invention, farmers used an iron or wooden plow that constantly had to be cleaned as rich soil stuck to its surfaces. The cast-steel plow was revolutionary as its smooth sides solved the problem of “stickiness”.

10. Many prayers end with it : AMEN
The word “amen” is translated as “so be it”. “Amen” is said to be of Hebrew origin, but it is likely to be also influenced by Aramaic and Arabic.

12. Event at which the work spelled out by the shaded letters was first exhibited in America : ARMORY SHOW
The Armory Show was more formally known as the 1913 International Exhibition of Modern Art. The exhibition took its name from the 69th Regiment Armory in New York City, where the works were first put on display. The exhibition later moved to the Art Institute of Chicago and the Copley Society of Art in Boston. The Armory Show is noted for its introduction to America of the experimental styles of Fauvism, Cubism and Futurism.

13. “The Canterbury Tales” pilgrim : REEVE
A reeve was a senior official in the days of Anglo-Saxon England, perhaps a chief magistrate of a town. Famously, a reeve appears in Geoffrey Chaucer’s “Canterbury Tales”. “The Reeve’s Tale” is the third tale in the book.

14. Norse literary works : EDDAS
The Poetic Edda and Prose Edda are two ancient works that are the source for much of Norse mythology. Both Eddas were written in the 13th century, in Iceland.

27. Amazon Prime competitor : HULU
Hulu.com is a website providing streaming video of full television shows. It is a joint venture of NBC and Disney, and so features a lot of their content. The service is free and is supported by advertising, but you can sign up for a premium subscription and get access to more shows. A lot of younger folks seem to use it a lot …

28. Like the work spelled out by the shaded letters : AVANT GARDE
People described as being avant-garde are especially innovative. “Avant-garde” is French for “advance guard”.

35. So-called “Giant Brain” unveiled in 1946 : ENIAC
The acronym ENIAC stands for Electronic Numerical Integrator and Calculator (although many folks insist that the C was for “Computer”). ENIAC was the first general-purpose electronic computer. It was designed to calculate artillery firing tables, but it ended up being used early on to make calculations necessary for the development of the hydrogen bomb. Given its uses, it’s not surprising to hear that development of ENIAC was funded by the US Army during WWII.

39. Winter setting for P.E.I. : AST
Atlantic Standard Time (AST) is four hours behind Greenwich Mean Time and one hour ahead of Eastern Standard Time. The list of locations that use AST includes Puerto Rico and the Canadian provinces of New Brunswick and Nova Scotia.

Prince Edward Island (PEI) is a maritime Canadian province. The island at the center of the province was named for Prince Edward, the fourth son of King George III and the father of Queen Victoria.

51. Part of the earth’s crust : PLATE
There are eight major tectonic plates, and numerous small plates, that make up the outermost shell of our planet. The heat from within the Earth causes the plates to move, albeit it slowly, creating earthquakes and volcanic eruptions where the plates meet each other … like right under my house here in California …

52. Item that may be portaged : CANOE
Portage is the carrying of a boat or its cargo over land, perhaps to circumvent an obstacle.

53. Little nothing : TWERP
“Twerp” and “pipsqueak” are both terms used for someone who is insignificant and contemptible.

55. New York restaurateur of old : SARDI
Sardi’s is a renowned restaurant in the Theater District of Manhattan that was opened in 1927 by Italian immigrant Vincent Sardi, Sr. Sardi’s is famous for attracting celebrities who pose for caricatures that are then displayed on the restaurant’s walls. After the death of actress and director Antoinette Perry in 1946, her friend and partner Brock Pemberton was having lunch at Sardi’s and came up with idea of a theater award that could be presented in Perry’s honor. The award was to be called the Tony Award.

60. General ___ chicken : TSO’S
General Tso’s chicken is an American creation, often found on the menu of a Chinese restaurant. The name General Tso may be a reference to General Zuo Zongtang of the Qing Dynasty, but there is no clear link.

63. Part of TNT : TRI-
TNT is an abbreviation for trinitrotoluene. Trinitrotoluene was first produced in 1863 by the German chemist Joseph Wilbrand, who developed it for use as a yellow dye. TNT is relatively difficult to detonate so it was on the market as a dye for some years before its more explosive properties were discovered.

64. Water : H2O
A water molecule is composed of an oxygen atom with two hydrogen atoms on roughly opposite sides (about a 150-degree angle). So, sometimes the molecule is represented by “HOH”, although more usually it’s “H2O”.