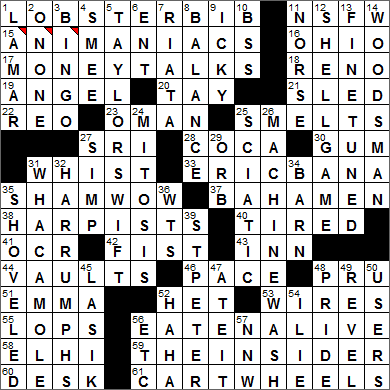 Today’s Wiki-est, Amazonian Googlies
Across
11. Online heads-up : NSFW
The abbreviation “NSFW” stands for “not safe/suitable for work”. I’ve never heard of the term outside of crosswords, but apparently it’s Internet slang.

15. 1990s TV cartoon produced by Steven Spielberg : ANIMANIACS
“Animaniacs” is a cartoon series that aired on Fox Kids and then the WB in the nineties. The show was a collaboration between Steven Spielberg and Warner Bros. Animation. One aspect of the show was the occasional humor aimed at an adult audience. Example were episodes that parodied Gilbert and Sullivan’s “Pirates of Penzance” and “H.M.S. Pinafore”, the Beatles movie “A Hard Day’s Night”, and an episode poking fun at the Three Tenors.

20. “The ___ Bridge Disaster” (McGonagall poem) : TAY
“The Tay Bridge Disaster” is an 1880 poem, the most famous ever penned by Scotsman William McGonagall. The poem is about a real-life disaster, the collapse of the Tay Rail Bridge in 1879 when a train was traveling over it during gale-force winds. Every one of the 75 people on the train were lost.

22. Diamond ___ Trucks (bygone company) : REO
Diamond Reo Trucks was a company formed by the merger of Diamond T and Reo Trucks in 1967.

23. It’s found on the toe of a boot : OMAN
The Arabian Peninsula is shaped like a boot, with the Sultanate of Oman occupying the toe of that boot.

25. Goes for the gold? : SMELTS
Metals are found in ore in the form of oxides. In order to get pure metal from the ore, the ore is heated and the metal oxides within are reduced (i.e. the oxygen is removed) in the chemical process known as smelting. The oxygen is extracted by adding a source of carbon or carbon monoxide which uses up the excess oxygen atoms to make carbon dioxide, a waste product of smelting (and of course, a greenhouse gas).

28. Bolivian export : COCA
The coca plant is native to South America, similar in appearance to a blackthorn bush. Coca leaves have been chewed for centuries, perhaps even as far back as 3,000 years ago. Chewing the leaves apparently produces a pleasurable, numb sensation in the mouth and a pleasant taste. The most famous alkaloid in the leaf is cocaine, but this wasn’t extracted in its pure form until the mid-1800s. The cocaine was used in a medicines and tonics and other beverages, including the original version of Coca-Cola! Before 1903, a glass of Coke would contain about 9 mg of cocaine. Coca-Cola still uses coca leaves, as the flavor is prized, but the cocaine is extracted before it arrives at the bottling plant.

31. Subject of a Hoyle treatise : WHIST
Edmond Hoyle was a writer, most famous for documenting the rules and play of card games. In particular, Hoyle first wrote a book on the game of whist that was very popular. Such was the success of Hoyle’s treatises that we use the phrase “according to Hoyle” to mean “according to some respected authority”. When the Poker Hall of Fame was founded in 1979, Edmund Hoyle was one of the first inductees, even though the game of power was invented after he died.

33. Portrayer of Hector in “Troy” : ERIC BANA
Eric Bana is an Australian actor who enjoyed a successful career in his home country before breaking into Hollywood playing an American Delta Force sergeant in “Black Hawk Down”. A couple of years later he played the lead in Ang Lee’s 2003 movie “The Hulk”, the role of Dr Bruce Banner. More recently he played the Romulan villain Nero, in the 2009 “Star Trek” movie.

35. Infomercial product said to hold 12 times its weight in liquid : SHAMWOW!
The ShamWow! is an ultra-absorbent towel that is touted in infomercials by pitchman Vince Offer.

37. Band with a 2000 Grammy-winning hit that’s on Rolling Stone’s list of all-time “most annoying songs” : BAHA MEN
The Baha Men are so called because they hail from … the Bahamas. Their big hit was “Who Let the Dogs Out?” which has been ranked as third in a list of the world’s most annoying songs!

42. Duke : FIST
“Dukes” is a slang term for “fists, hands”. The route taken by “dukes” to become fists seems very tortuous, but might just be true. The term “fork” has been slang for “hand” for centuries (and gives rise to “fork out” meaning “hand over”). The slang term “fork” is expressed in Cockney rhyming slang as “Duke of York”, shortened to “duke”. As I said, tortuous …

51. George Knightley’s love interest, in literature : EMMA
I listened to one of my favorite Jane Austen novels on audio book not so long ago. “Emma” is the tale of Emma Woodhouse and the wonderful George Knightley. At the end of the story, Emma marries Knightley and her young friend Harriet marries Robert Martin, who had been trying to get Harriet’s attention practically from page one of the novel.

56. Mobbed by mosquitos : EATEN ALIVE
“Mosquito” is the Spanish for “little fly”. The female mosquito actually has to have a “blood meal” before she is able to lay her eggs.

58. Not class-specific : ELHI
“Elhi” is an informal word used to describe anything related to schooling from grades 1 through 12, i.e. elementary through high school.

59. 1999 Crowe/Pacino film nominated for seven Oscars : THE INSIDER
Jeffrey Wigand was once vice president of research and development at the tobacco company Brown & Williamson. Famously, Wigand gave a “tell all” interview for television’s “60 Minutes” in which he described deliberate actions by his employers to increase the level of addiction of cigarette smokers. Wigand’s fascinating story was told in the 1999 movie “The Insider”, with Russell Crowe playing the whistle-blower.

Down
1. Hip-hop’s Kendrick ___ : LAMAR
Kendrick Lamar is a hip hop singer from Compton, California. Lamar’s full name is Kendrick Lamar Duckworth, with the singer’s given name in honor of Motown artist Eddie Kendricks.

4. Mr. of “Peter Pan” : SMEE
In J. M. Barrie’s play and novel about Peter Pan, Smee is one of Captain Hook’s pirates and is Hook’s right-hand man. Smee is described by Barrie as being “Irish” and “a man who stabbed without offence”. Nice guy! Captain Hook and Smee sail on the pirate ship called the Jolly Roger.

5. Singer/songwriter whose name anagrams to ART OF SLY WIT : TAYLOR SWIFT
Singer Taylor Swift had one of her first gigs at the US Open tennis tournament when she was in her early teens. There she sang the national anthem and received a lot of favorable attention for the performance.

7. Gaucho gear : RIATA
“Reata” is the Spanish word for “lasso”. We tend to use the spelling “riata” in English, but sometimes can use the original Spanish word.

11. Language from which “litmus” comes : NORSE
Litmus is a mixture of naturally-occurring dyes that responds to acidity by changing color. Litmus was probably first used around 1300 by the Spanish alchemist Arnaldus de Villa Nova, who extracted the blue dye from lichens. One suggestion is that the term “litmus” comes from the Old Norse “litmose” meaning “lichen for dyeing”.

25. Kind of nerve : SCIATIC
The sciatic nerve is the longest and widest nerve in the human body. It runs from the lower back down through the leg to the foot.

29. Mars or Neptune : ORB
The surface of the planet Mars has a very high iron oxide content, so Mars is red because it is rusty!

Neptune is the farthest planet from the Sun in the Solar System. The existence of Neptune was predicted as early as the 1820s by mathematics based on observations of the orbit of Uranus. The planet was actually first observed in 1846.

31. Metaphor for a tedious, futile effort : WHAC-A-MOLE
The Whac-A-Mole arcade game was invented in 1976. Players use a mallet to force five plastic moles back into their holes. Whacking the moles can be so frustrating that we sometimes use the term “Whac-a-mole” to describe a repetitive and futile task.

32. Expresses grumpily : HARRUMPHS
“Harrumph” is such a lovely word, meaning “to make a show out of clearing one’s throat”. The word itself is meant to imitate the sound made.

34. Pottery ___ : BARN
Pottery Barn is a chain of home furnishing stores that has been around since 1949.

45. Kind of surgery : LASIK
LASIK surgery uses a laser to reshape the cornea of the eye to improve vision. The LASIK acronym stands for “laser-assisted in situ keratomileusis”.

48. What the rainbow flag signifies : PRIDE
The best-known rainbow flag is the one representing gay pride. Such usage of the rainbow flag was popularized in 1978 by artist Gilbert Baker. The varying colors of the flag represent the diversity of the gay community.

50. Web browsers : USERS
The World Wide Web (WWW) was effectively the invention of British computer scientist Tim Berners-Lee. The key to Berner-Lee’s invention was bringing together two technologies that already existed: hypertext and the Internet. I for one am very grateful …

54. First name in the International Tennis Hall of Fame : ILIE
I think that Ilie Nastase was the most entertaining tennis player of the 1970s, the days of Jimmy Connors, Bjorn Borg and John McEnroe. No matter how much pressure there was in a match, Nastase always had time to give the crowd a laugh. After retiring from the sport, he had a few novels published (in French) during the eighties. Then Nastase went into politics, making an unsuccessful run for the mayorship of Bucharest in 1996. He made a successful run for the Hungarian Senate though, and has been a senator since May 2014.